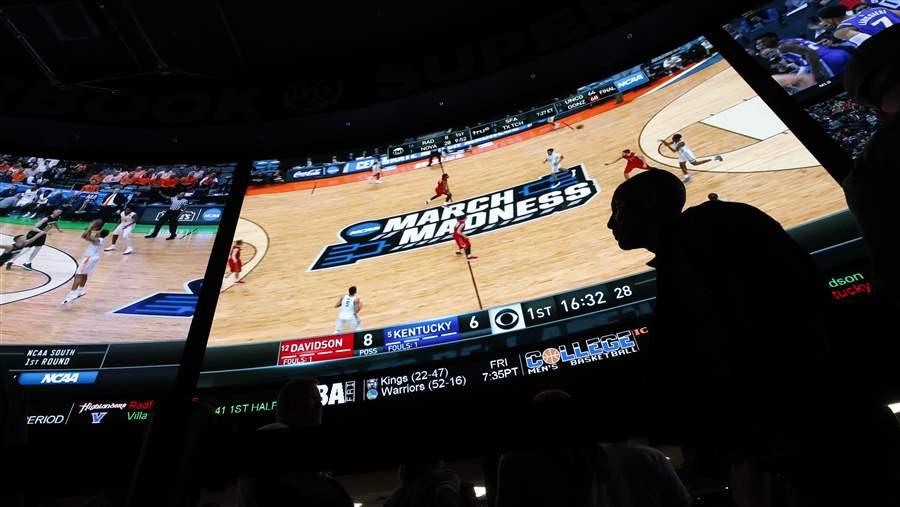 People wait in line to bet on the NCAA college basketball tournament at the Westgate Superbook sports book in Las Vegas. The U.S. Supreme Court gave the go-ahead for states to allow gambling on sports. But only a few states may offer legal sports betting very soon, and revenue estimates are uncertain.

Some states were getting ready to jump into sports gambling even before the U.S. Supreme Court legalized it last week, lining up legislation that would allow their states to cash in as quickly as possible on millions of dollars in tax revenue.

New Jersey, which won the high court case, and Delaware, with its racetracks, could be the first to benefit, potentially hosting sports gambling in a matter of weeks. Mississippi and Pennsylvania also expect to see legal betting soon.

But gambling experts warn that starry-eyed lawmakers might be overestimating their haul from legalized sports betting. Differences in state tax structures, competition for a limited market of gamblers, the push for a federal framework and the continued allure of black-market betting all could cut into the hoped-for windfall.

A 2017 study by Oxford Economics, conducted for the American Gaming Association, estimated that sports betting could become a $41.2 billion industry — including “downstream impacts” as well as spending by bettors — and contribute about $3.4 billion in taxes to state and local governments.

That “may sound like big money — but it isn’t,” said Lucy Dadayan, a senior policy analyst at the Rockefeller Institute of Government.

The estimated $3.4 billion represents less than 0.3 percent of total state and local revenue, she said. It’s naive, she added, to think sports betting will be “a budget saver.” Historically, revenue from expanding gambling deteriorates over time, she said. And much of the “new” gambling money that flows in is shifted from other forms of betting.

“Most certainly it will generate some revenues for the early-adopter states,” Dadayan said, “which will encourage other states to follow suit and legalize sports betting.”

That could give early states an advantage. And they’re anticipating wins.

“Great!” said West Virginia Gov. Jim Justice after the ruling. “I think it’s great because, to be perfectly honest, today we all know there’s a lot of illegal sports betting going on,” Justice, a Republican, told West Virginia reporters.

About 20 states have considered sports gambling legislation in 2018, but only West Virginia’s has passed. Mississippi and Pennsylvania enacted theirs last year.

Connecticut also now has an authorizing law in place, and New York is getting close, according to legalsportsreport.com, an industry website and newsletter tracking wagering laws. Oregon enacted legislation decades ago that could also be used to sanction sports gambling.

Dustin Gouker, the newsletter’s editor, said revenue “is a hard thing to forecast.” He said even if states legalize sports betting, the black market — with estimated wagers between $50 billion and $100 billion a year — is not going to disappear.

“Legal books are going to do well because they are legal and trustworthy,” he said. “But offshore books offer anonymity and are tax free,” he said, referring to illegal books based in other countries.

In Nevada, where it has been legal since 1984, sports wagering makes up an increasingly higher portion of overall gambling revenue, according to statistics compiled by David G. Schwartz, director of the Center for Gaming Research at the University of Nevada Las Vegas. In 2017, sports wagering made up 2.2 percent of the casinos’ take, a historic high.

Depending on how the sports gambling is structured in a state, it may or may not cut into the illegal sports gambling market, or other types of gambling, Schwartz said. He also noted that Nevada gambling revenue overall is still below its pre-recession peak.

Observers think the gambling industry, like any other industry, will consider states’ tax and regulatory structure when deciding whether to get involved. New Jersey, with its Atlantic City casinos, and Delaware, with its racetracks, already have some gambling rules in place for the legal betting that goes on there now.

“We have to make sure that we don’t price our own casinos out of the industry,” said Republican state Rep. Alan Morrison of Indiana, whose sports wagering bill failed this year. “If the taxes are too high, the folks who are setting the lines will not be able to be competitive with those who are not being taxed at all.”

Another wrinkle: In states with prominent professional or collegiate sports teams, those organizations might get a cut of the revenue. Several states and professional sports leagues are lobbying for “integrity fees,” ostensibly to fund efforts to make sure that the sporting events are legitimate, but which have been criticized by the gambling industry as just another way for the sports leagues to make money.

Sports leagues, leery of navigating different regulations in multiple states, are calling on Congress to write federal legislation that would regulate the sports betting industry nationwide, partially based on the “integrity” issue.

“Congress has long-recognized the potential harms posed by sports betting to the integrity of sporting contests and the public confidence in these events,” an NFL spokesman said in a statement after the ruling. “Given that history, we intend to call on Congress again, this time to enact a core regulatory framework for legalized sports betting.”

Meanwhile, states are pushing ahead. Chris Grove, the lead analyst at playusa.com, which tracks and promotes legal and regulated gambling, thinks some will take more time than others.

Morrison and a colleague in the Senate were shepherding legislation this year, but they ran into competing constituencies, not the least of which was the NCAA, headquartered in Indiana, which was opposed altogether. The bill died.

The NCAA has reluctantly acknowledged in the past week that the Supreme Court’s ruling changes things. And now, in light of the ruling, Morrison, a Republican, is on the trail to get wagering legislation revived and passed next session.