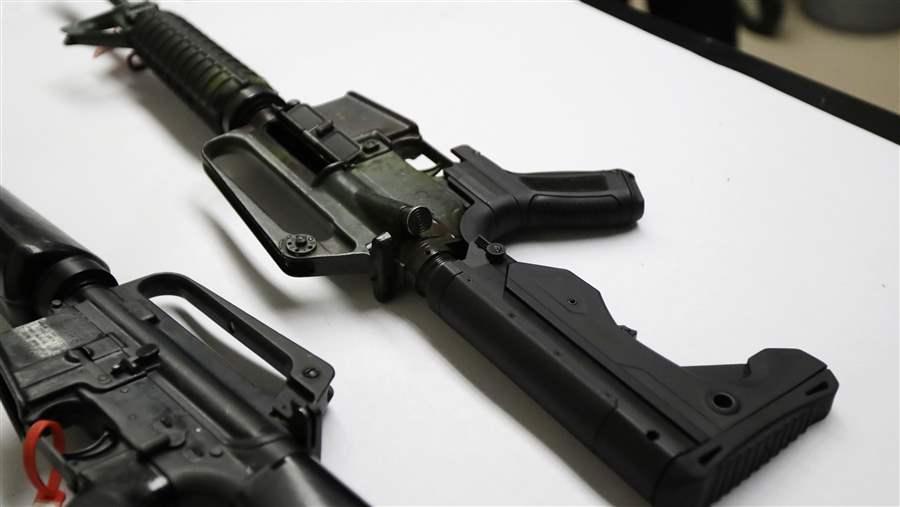 A semi-automatic rifle at right that has been fitted with a bump stock device to make it fire faster. Laws to ban these devices have passed in seven states.

Under New Jersey’s new bump-stock ban, which was approved in January, residents were supposed to destroy or turn in their bump stocks by mid-April.

So far, New Jersey State Police say, they have not received a single one.

Months after a man used a bump stock to quickly mow down 58 people in Las Vegas, seven states now prohibit the sale and possession of the devices, which enable semiautomatic rifles to fire at the rate of fully automatic fire. Bans of bump stocks in Hawaii and Connecticut are currently awaiting governors’ signatures, and lawmakers in Delaware and Rhode Island are expected to approve bans soon.

Even though proposed bump-stock bans have stalled in more than a dozen states, gun control advocates who want to rid the country of the accessory are celebrating their existing statehouse victories. They agree with gun owners and police, however, that enforcing the bans will be a challenge.

It’s hard to know for sure, but Americans could own as many as 520,000 bump stocks, according to estimates from the federal Bureau of Alcohol, Tobacco, Firearms and Explosives (ATF). Many of the devices are untraceable, in part because they don’t have serial numbers.

New Jersey is not the only state having trouble enforcing its ban. In Massachusetts, where residents had until February to surrender their bump stocks, State Police received just three devices. The Bay State’s ban, which passed in November, is a felony.

The first reported violation of the bump-stock ban in Massachusetts occurred in March, when police arrested a couple after discovering an arsenal of weapons in their hotel room. The bump-stock charge was one of more than three dozen gun charges in that case.

Bump-stock bans in Florida, Maryland, Vermont and Washington have been approved but have not yet gone into effect.

Connecticut’s ban has passed both houses of the state legislature and is awaiting the signature of Democratic Gov. Dannel Malloy. Jeremy Stein, executive director of Connecticut Against Gun Violence, said he doesn’t expect the ban in his state to prompt a flood of bump-stock owners to turn in their devices.

“Unless the police are getting search warrants to go house by house, there will probably be people who aren’t giving up their bump stocks,” Stein said. “Enforcement will come into play when the police are investigating other crimes, like domestic violence or whatever, and they come across a bump stock. They can tack on another charge.”

Connecticut State Police are preparing for residents to turn in their bump stocks, said Sgt. Alex Giannone of the Special Licensing and Firearms Unit. But Giannone is not expecting the state to receive many of the devices.

“I don’t believe this is a widely purchased and popular accessory,” he said.

Still, when a person does surrender a bump stock, state police will dismantle the device, destroy it with a saw and burn it in an incinerator, he said.

One of the main reasons why owners are not turning in their bump stocks to authorities is that there’s no financial incentive attached to many of these state bans, said Mark Pennak, the president of Maryland Shall Issue, a gun rights group that opposed Maryland’s recently passed bump-stock ban.

“You’re basically telling people to destroy their property,” Pennak said. “If you take someone’s private property, you have to pay for it.”

“They bought them just because they’re fun to use, and that’s it,” he said. “You’re criminalizing a plastic item, and sending people to prison for three years for it.”

Maryland’s ban, which goes into effect in October 2019, does not include a buy-back program. But the one in Washington state does: A section of the new law calls on the Washington State Patrol to establish a year-long buy-back program starting in July, where residents can turn in bump stocks and receive $150.

Delaware’s proposed bump-stock ban, which has passed the state House and is being considered by the Senate, would include $15,000 toward a buy-back program.

Another concern for some gun rights activists is that the state bans do not give enough notice to residents that possessing a bump stock is, in most cases, a felony.

Hawaii’s bump-stock ban, which awaits the signature of Democratic Gov. David Ige, would go into effect immediately and carry a five-year, $10,000 fine upon a conviction. The language of the bill, however, does not include a grace period or any instruction for how residents can dispose of their devices. This sort of vagueness concerns Harvey Gerwig, president of the Hawaii Rifle Association, an affiliate of the National Rifle Association.

“Nobody knows how to implement this stuff,” Gerwig said. “There’s nothing in the bill that says what will happen.”

Gerwig said he fears that gun owners who don’t closely follow state policy changes and therefore aren’t aware of the ban might be charged with a felony if they are caught using or even possessing the devices.

Vermont’s bump-stock ban does instruct the Department of Public Safety to “develop, promote, and execute a collection process that permits persons to voluntarily and anonymously relinquish bump-fire stocks” before the new law goes into effect in October.

But Evan Hughes, the vice president of NRA Foundation Projects at the Vermont Federation of Sportsmen’s Clubs, a gun rights group, said the law is still “virtually unenforceable.”

“The only way to comply with the law is divest themselves of their property,” he said.

Allison Anderman, the managing attorney for the Giffords Law Center, a gun control organization founded by former U.S. Rep. Gabby Giffords, the Arizona Democrat who survived a shooting in 2011, acknowledged that enforcing a ban on possession is a challenge. But she emphasized that merely prohibiting the sale of new devices will eventually reduce the number of bump stocks in circulation.

The largest manufacturer of bump stocks, Slide Fire Solutions, has announced that it will stop selling them on May 20.

Meanwhile, the U.S. Justice Department is considering a nationwide bump-stock ban, which has been endorsed by President Donald Trump. ATF is soliciting public comment on the proposal, but it may face a tricky legal challenge: During President Barack Obama’s tenure, the ATF determined that it did not have the authority under the National Firearms Act to regulate bump stocks.