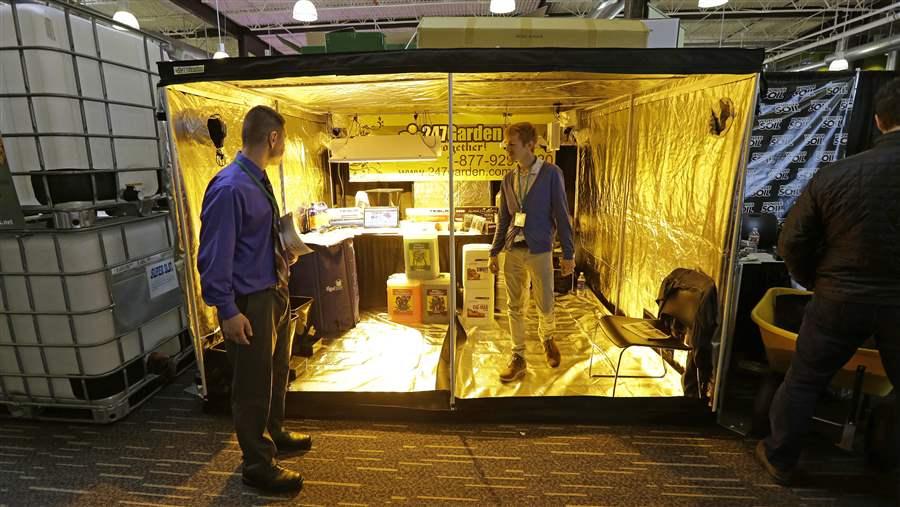 247Garden, a wholesale distributor of indoor garden and hydroponics growing supplies, exhibits a growing structure at a marijuana business trade show in Seattle. The Small Business Administration will no longer back loans to firms that derive any portion of their revenue from the cannabis industry, such as hydroponics makers that market to cannabis clients.

Marijuana legalization at the state level has created a moneymaking opportunity not only for licensed growers and sellers but also for a wide range of ancillary businesses, from publicly traded garden product companies to local print shops.

Now a new Small Business Administration (SBA) policy could force some entrepreneurs to choose between serving cannabis clients and getting a federally subsidized loan.

In an April policy notice, the federal agency said it won’t approve loans to businesses that derive any portion of their revenue from sales to marijuana clients, because the drug is illegal under federal law. The policy could hurt local nature centers, architects, designers, attorneys and other businesses that occasionally work with licensed weed industry, legal experts say.

Supporters of cannabis legalization are speaking out against the lending policy. “This rule would be impossible to implement and wreak havoc across multiple sectors of the economy,” said Oregon Rep. Earl Blumenauer, a Democrat, in a recent letter to the SBA. “For example, would just one order from a cannabis business for soil preclude a locally-owned garden center from receiving federal government loan support in the future?”

Nine states and Washington, D.C. allow marijuana to be sold for recreational and medical use and 21 others allow it to be sold for medical use. Nationwide, sales of the plant and its products hit an estimated $8.6 billion in 2017 and supported over 121,000 jobs, according to a report from the Arcview Group and BDS Analytics, cannabis industry research firms. That’s almost double the sales Arcview estimated for 2014.

Even more jobs have been created at non-marijuana businesses. In states where marijuana is legal, it’s easy to find marketing agencies that create campaigns for cannabis brands, greenhouse manufacturers that sell products just for marijuana growers and commercial printers that offer new services for marijuana clients.

The SBA has backed over 300,000 loans nationwide since fiscal 2013, and some loan recipients are currently serving cannabis clients, according to a cursory Stateline review of federal loan data and company websites. The agency’s new policy could make them ineligible for future loan assistance.

Take the Green Sunshine Company, a Portland, Oregon-based business that makes lighting systems for growing plants and has used social media to promote its success with cannabis growers. A company representative said the lighting technology is made for anyone who wants to grow indoor plants, and that he may not know what customers intend to grow.

The Green Sunshine representative didn’t want to disclose his name – a reticence shared by several other SBA loan recipients whose websites boast of pot-related clients, but who declined to comment on the new policy.

The SBA isn’t answering questions, either. “Please be aware that the Small Business Administration is not making any comments at this time,” Cecelia Taylor, an agency spokeswoman, said in an emailed statement.

It may be too soon to assess the impact of the policy, said Barbara Vohryzek, president and CEO of the National Association of Development Companies, a trade association for lenders that provide SBA-backed loans.

She said she’s not sure why the agency made the new policy but it may be because the licensed marijuana industry has grown too big to ignore. “It’s becoming an issue that they’re having to address,” she said.

The SBA’s move to restrict loans to companies that touch marijuana money is the latest example of a federal agency obeying federal law and hurting pot entrepreneurs in the process, said Michael Correia, director of government relations for the National Cannabis Industry Association.

“It doesn’t shock me or surprise me in any way,” he said. Government agencies are risk averse, and would rather say no to the cannabis industry than get into trouble with the Justice Department, he said. Federal law classifies marijuana as a Schedule I controlled substance, on par with heroin and ecstasy. U.S. Attorney General Jeff Sessions is also a prominent opponent of legalizing the plant. 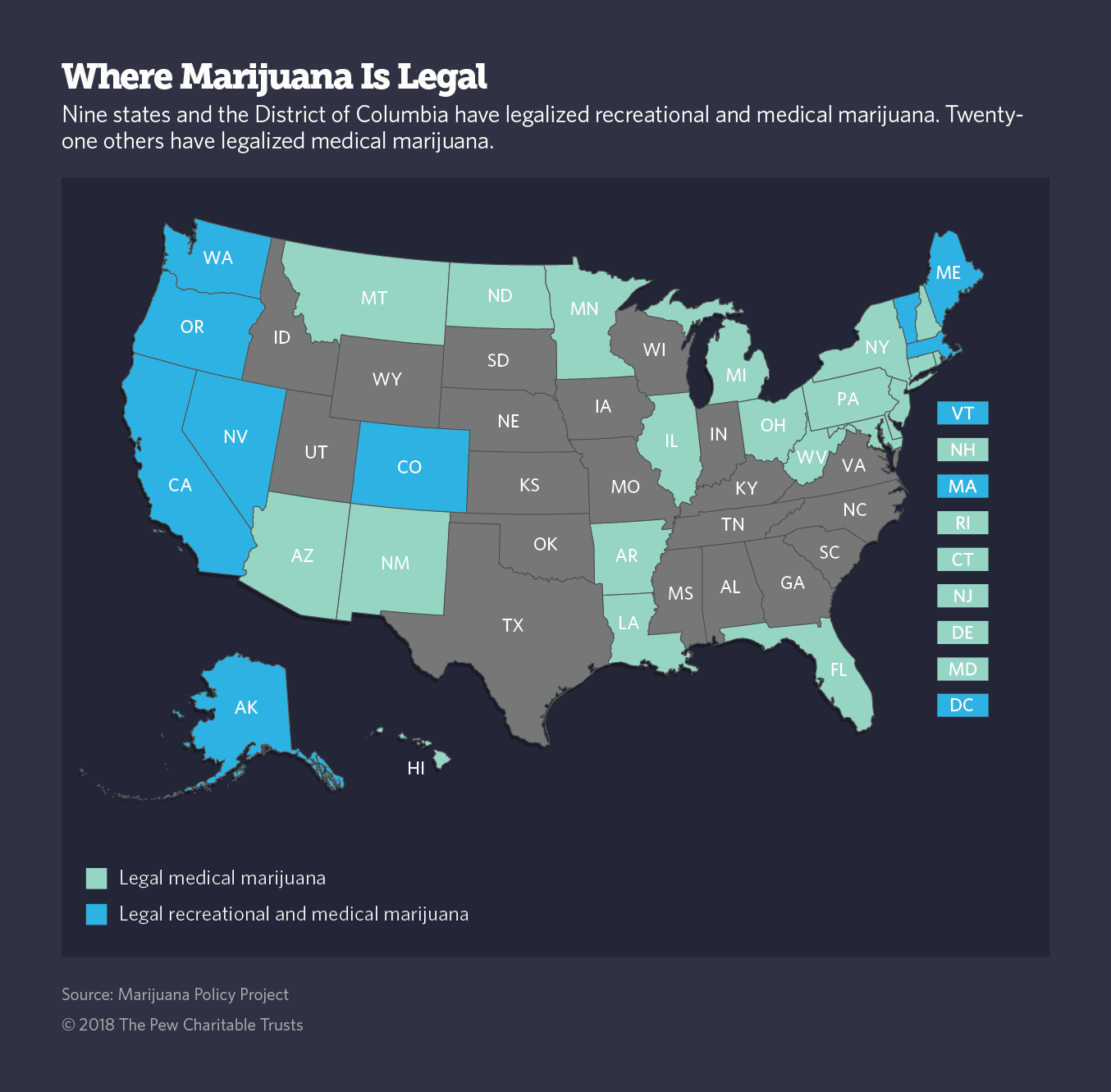 The SBA doesn’t make loans directly. Instead, it guarantees loans, allowing banks to lend money to businesses on better terms. Businesses are eligible for the loans based on the size of their revenues and number of employees, among other factors. Under longstanding federal law, businesses can’t get government-backed loans if they engage in illegal activity.

The agency issued updated guidance last October that said borrowers are ineligible for federally-subsidized loans if they lease space to businesses that violate federal law, including marijuana dispensaries. In April, the agency issued clarification on the marijuana issue – among others – in response to feedback from lenders.

“Because federal law prohibits the distribution and sale of marijuana, financial transactions involving a marijuana-related business would generally involve funds derived from illegal activity. Therefore, businesses that derive revenue from marijuana-related activities or that support the end-use of marijuana may be ineligible for SBA financial assistance,” the notice said.

Ineligible businesses include both those that directly touch cannabis plants, such as growers, processors, distributors and retailers, and businesses that derive any gross revenue from sales to growers, sellers and the like, the notice said. 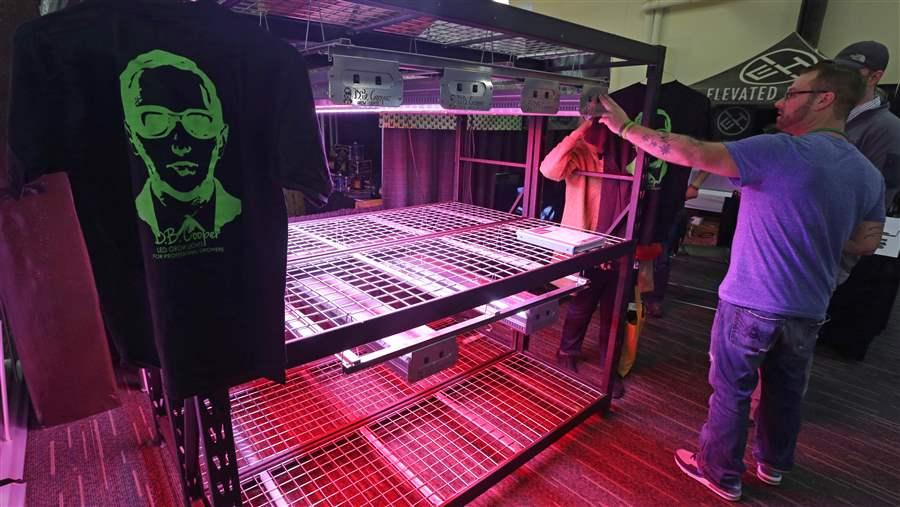 It cited businesses that sell bongs, grow lights and hydroponic equipment as examples of potentially ineligible borrowers, and said some hemp businesses also may be ineligible for loans.

The new SBA policy could hurt non-white entrepreneurs who have been pushed to the fringes of the cannabis boom, said Kayvan Khalatbari, who chairs the board of the Minority Cannabis Business Association, a business group that advocates for equal access to the industry.

“We’ve see a lot of people of color move to ancillary businesses in this space,” he said, in part because they tend not to have the capital to start a licensed dispensary or grow operation. Khalatbari said it’s “really unfortunate” that such businesspeople will lose the opportunity to get a low-cost loan.

A Challenge to Enforce

SBA staff may not be commenting publicly, but they’re privately telling banks to increase their due diligence to make sure potential borrowers have no ties to the marijuana trade.

Mark Abell, senior vice president and SBA division director at NBH Bank, said SBA officials have told him that banks should carefully review borrowers’ websites to make sure they’re not marketing to the pot industry. If banks see any red flags, they should submit the prospective borrower’s file to the federal agency for legal review.

He said his bank also has started requiring all prospective borrowers to certify, to the best of their knowledge, that they have no connections to the marijuana industry. No loan applications have been denied yet, he said.

“When you’re in a market like Colorado, cannabis is pretty pervasive,” Abell said, and it’s hard to figure out if non-marijuana businesses are profiting from cannabis. “A business that sells online may not know if it’s selling to the cannabis industry,” he said. NBH Bank has branches in five states, including Colorado, where Abell is based.

Steve Schain, an attorney at the Denver-based Hoban Law Group who focuses on banking and cannabis law, says he doesn’t think the new lending policy will work. “I think it’s almost impossible to implement,” he said, because it’s impossible to police every business transaction.

The policy may create unreasonable due diligence requirements for companies, too, said Andrew Freedman, Colorado’s former “pot czar” and now a consultant working on marijuana legalization. “Making sure that you’re not doing it is much harder than a regulatory system for doing it,” he said.

Freedman gave the hypothetical example of a small electrical services business that occasionally works with indoor marijuana growers. Does the owner now need to train his electricians to identify marijuana businesses? “That’s the part where I’m like, ‘This could be real trouble,’” Freedman said.

Abell said it makes sense that companies that exist for the sole purpose of serving the marijuana industry—such as some businesses that sell grow lights—shouldn’t be getting federal loan aid.  “I think we should all agree that that isn’t a business that should get SBA financing,” he said. But businesses that just happen to serve cannabis clients operating legally in the state – such as garden supply centers – are a different matter, he said.

The SBA may rethink its policy in the future, Abell said. "I'm optimistic that ultimately, we’ll get to a more reasonable place."