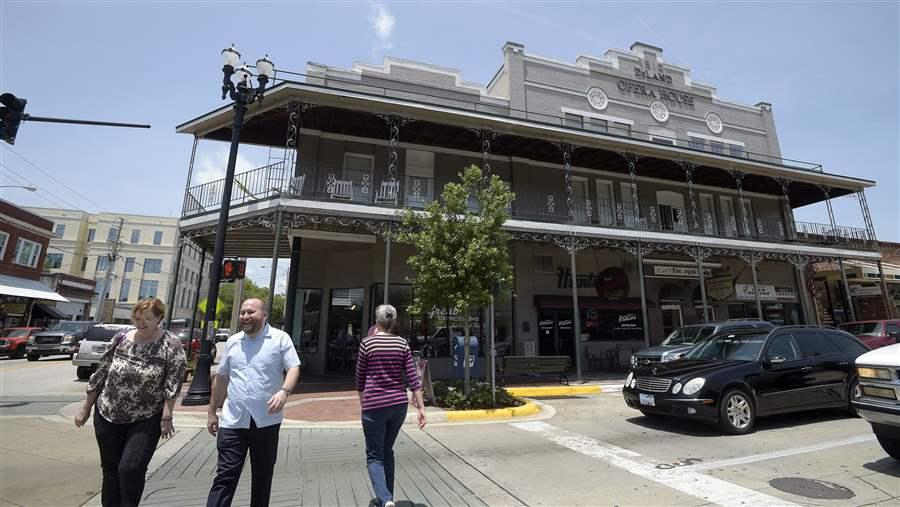 Pedestrians walk past the Deland Opera House in downtown Deland, Fla. Between 2009 and 2016, pedestrian deaths in Florida rose by 40 percent, to 652 from 466.

In August 2017, Alexis Dale moved from San Diego to South Florida to attend Florida International University, trading one coastal paradise for another.

Two months later, while crossing an eight-lane road near campus at 3 a.m., she was struck by a car and thrown to the side of the road. Paramedics pronounced her dead at the scene.

Friends and family knew Dale as one of a kind — an ambitious young woman who was eager to pursue a degree in information technology and who loved her dog, Bella. But Dale was one of hundreds of pedestrians who died in Florida that year.

The number of pedestrians killed on U.S. roadways is up — by a lot. Nearly 6,000 pedestrians were killed in 2016, up from 4,100 in 2009 and the highest toll since 1990, according to the Governors Highway Safety Administration. The number of deaths held steady between 2016 and 2017 — but that was cold comfort.

“It leveled off at a 25-year high,” said GHSA’s executive director, Jonathan Adkins. “It’s nothing to celebrate.” 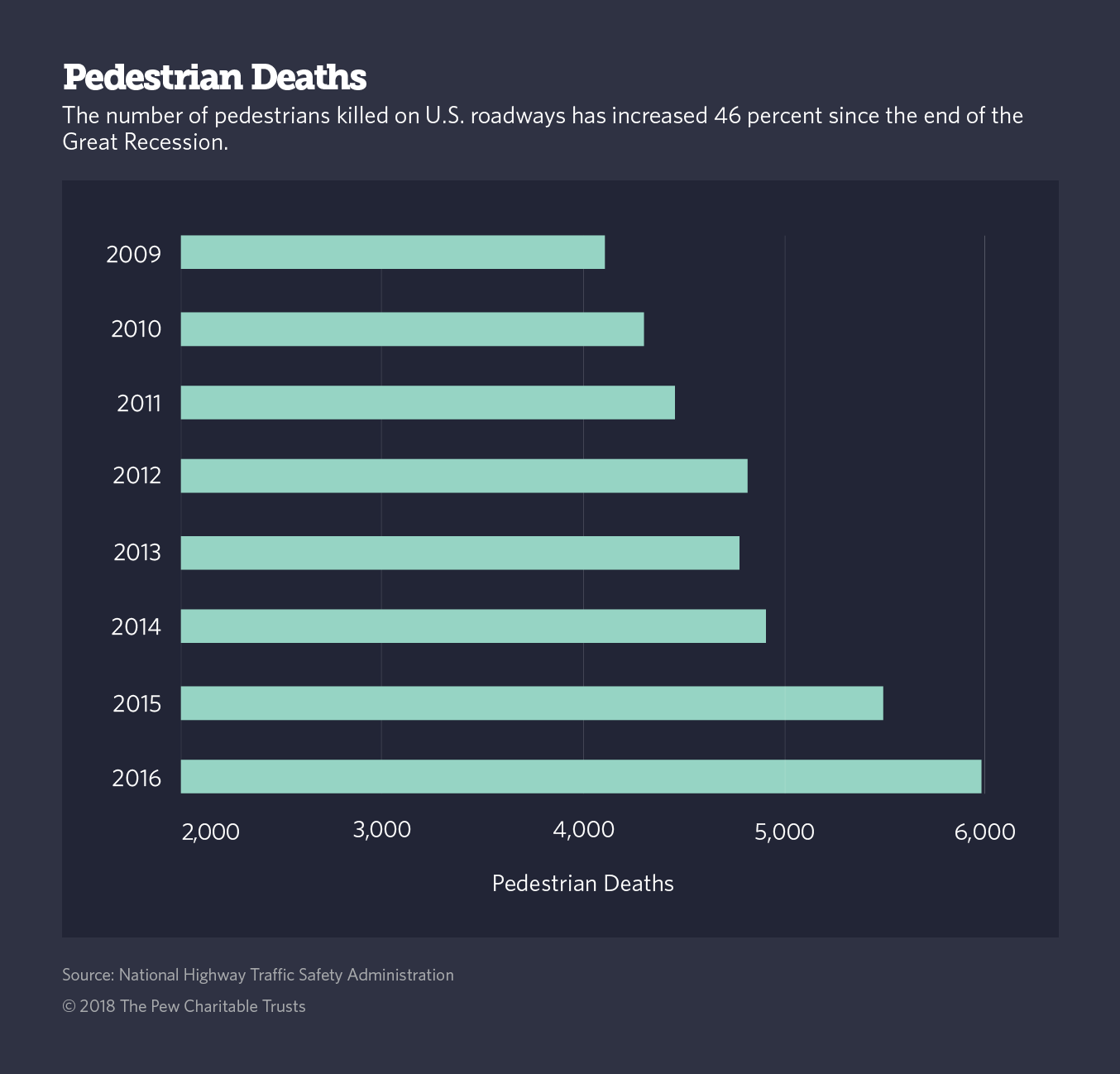 The problem is increasingly concentrated in certain states — and Florida is one of them. Between 2009 and 2016, pedestrian deaths in the state rose by 40 percent, to 652 from 466. To stem the tide, Florida officials increasingly are placing their faith in engineers.

In analyzing trouble spots, the state transportation department now uses mapping software that can identify risk factors such as construction sites, which can divert pedestrian traffic to unsafe routes; land-use patterns, which can then dictate the location of signaled crosswalks; and lighting, which affects pedestrian visibility.

Last month, several of these factors tracked by the agency played a role in a pedestrian fatality in Putnam County. Around 9:30 p.m., a pickup truck struck a man crossing State Road 20 at an intersection with no crosswalk. The state road has minimal lighting, and the Florida Highway Patrol noted visibility was low at the time of the crash. The nearest crosswalk on the high-speed state road was about a mile away.

“Engineering is a proven way to improve safety outcomes,” said Richard Retting, general manager of the firm Sam Schwartz Engineering and author of the pedestrian fatality report released by the Governors Highway Safety Administration. “Florida has some of the best professional planners and engineers working on solving these pedestrian safety problems.”

There is no single cause of the national spike in fatalities, but there are clear patterns.

For example, alcohol consumption by drivers and pedestrians has contributed to about half of pedestrian deaths in recent years, according to federal data.

Another factor is distraction. In 2016, an estimated 562 pedestrians and bicyclists were killed in “distraction-affected” traffic accidents, according to the National Highway Traffic Safety Administration. “Distracted walking” injuries resulting from cellphone use by pedestrians increased by more than a third between 2010 and 2014.

To help address its rising pedestrian fatality rate, Florida is relying on the engineers who design and build roadways and walkways.

“We just have to make sure we identify the right problem for them to solve,” said DeWayne Carver, manager of the state Department of Transportation’s Complete Streets program.

For many years, the department instructed engineers to design roads to handle as much traffic as possible, according to Carver. In recent years, however, it has directed them to prioritize pedestrian safety.

Some of the changes have been subtle, such as changing the standard lane-width on state roads, which had long been 12 feet. Florida narrowed its standard lane width to 11 feet, and to 10 feet in some urban areas.

“Research has shown that narrower roads are more effective for traffic management and safety,” Carver said.

Roads with narrower lanes had lower fatality rates, despite many cities assuming wider lanes are safer, according to an analysis of roadways in cities around the world by the World Resources Institute.

In Florida, Carver said, “If you need a wider lane, you can still ask for it — but you need to show why you need it.”

“Flip-flop” parking, on-street parking that alternates from one side of the road to the other on different blocks, can also improve safety by keeping drivers alert, Carver said. He cites Centre Street in Fernandina Beach, a coastal town near the Georgia border, as a successful example. On Centre Street, stretches of parking spaces alternate from one side to both sides of the street, punctuated by red brick crosswalks.

“It does a great job of using parking to create a chicane effect and keep traffic speeds low,” Carver said.

Engineers are also encouraged to employ “terminated vistas,” in which a large structure is located at the end of a roadway within view of the driver, to “send a message to the driver that they need to be driving slower.”

The year before Alexis Dale died, construction had started on a nearby pedestrian bridge spanning the busy roadway near Florida International University.

Nine months from its completion, the 950-ton bridge collapsed, and the concrete rubble crushed drivers and workers, killing six.

The scope of the project was ambitious: Connecting the FIU campus with the nearby town of Sweetwater, the bridge was designed to serve as a floating public space, with benches, tables, viewing platforms and Wi-Fi.

The bridge was a multifaceted effort: Tallahassee-based FIGG Bridge Engineers designed the bridge, Miami-based Munilla Construction Management was responsible for construction, and the state Department of Transportation provided oversight.

But the project was not the first of its kind. The engineers behind the pedestrian bridge at FIU used a method called “accelerated bridge construction.” The ABC method is intended to minimize construction time and traffic delays by completing much of the construction off-site and assembling the prefabricated bridge components in a shorter time span.

But Retting does not believe the collapse of the FIU pedestrian bridge will dissuade engineers in Florida — or around the country — from pursuing these kinds of ambitious and innovative projects to solve pedestrian safety issues.

"There can be setbacks with progressive infrastructure" projects, Retting said. "But I think setbacks like this are specific to individual projects. This was a one-off."