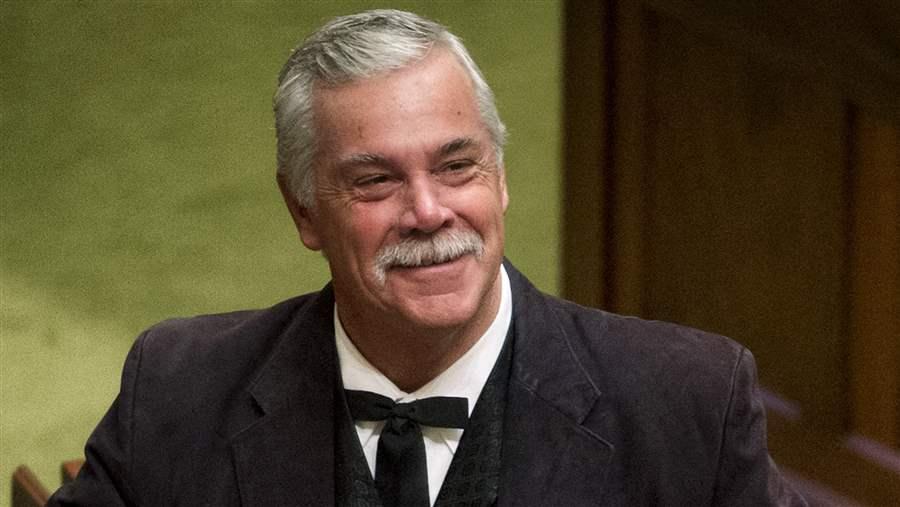 Former state Rep. Tony Cornish, a Republican from Minnesota, resigned in November after sexual harassment allegations. The state is one of many considering policy changes since the start of the #MeToo movement.

In March, former Minnesota state Rep. Tony Cornish made a surprise visit to the state Capitol, where he attended committee hearings and talked to former colleagues.

His presence was enough to put at least a few women on edge. Sarah Walker, a lobbyist, said she heeded texted warnings to avoid certain areas of the building. State Rep. Erin Maye Quade said she made a point of staying in her committee room. When Cornish ended up walking in the room, she said, for a split second she thought he was there to kill her.

Cornish, a Republican, resigned in November after Walker and Maye Quade, a Democrat, accused him of sexual harassment. Walker said he repeatedly propositioned her for sex and Maye Quade said he often made inappropriate comments — allegations that Cornish has denied. He did not return a phone call for comment.

But that day in March, some of his former colleagues greeted him with smiles and laughter, Maye Quade recalled. The visit sent a potentially corrosive message to women in the Statehouse, Walker said — a message that nothing had changed.

Seven months after the #MeToo movement began, state lawmakers across the country are still grappling with how to root out what many say is a longstanding misogynist culture in statehouses. After dozens of sexual harassment accusations against sitting male state lawmakers, at least 16 legislators in a dozen states have resigned or been expelled, according to a Stateline tally.

In many states, accused lawmakers were knocked from leadership posts, or voluntarily relinquished them, while remaining in office. Others apologized and kept their positions, or maintain their innocence.

As many legislative sessions end, many of the substantial policy changes that state lawmakers were hoping for — such as creating a private and safe method for victims to come forward and a nonpartisan way for bad behavior to be punished — remain elusive.

Many female state lawmakers, as well as consultants working to help legislatures prevent harassment, say there is still a long way to go before women feel entirely safe reporting harassment, and before men who engage in harassment or assault are held accountable.

State lawmakers this year have mostly focused on “low-hanging fruit,” said Andrea Johnson, senior counsel for state policy at the National Women’s Law Center. At least 11 legislative chambers have updated their harassment policies. At least three of those policies now explain that everyone who works in, or visits, the statehouse is protected from harassment.

In at least a dozen states, legislatures have begun hosting more in-depth or frequent anti-harassment trainings. And at least three states — Delaware, Illinois and Virginia — enacted laws to make this training mandatory.

The work will continue, Johnson said, and the momentum is not slowing. At least a third of states are studying what changes should be made.

“We recognize how much our laws and culture need to change,” Johnson said. “That’s not something you can accomplish in one legislative session by any means.”

Many legislatures have realized that while their policies are strong, the overall environment needs to change, said Jon Griffin, a program principal at the National Conference of State Legislatures. Griffin and Johnson have visited legislatures across the country this year to provide advice on how to prevent harassment.

Griffin repeated a line he heard in California: “Cultures eat policies for breakfast” — meaning that culture influences behavior more than rules and regulations.

One thing, at least, has changed: Some more senior female state lawmakers say they no longer hesitate to speak out when they see what they perceive to be harassment.

In Kentucky, state Rep. Kelly Flood, a Democrat, said she “had her own evolution” on this when in January former House Speaker Jeff Hoover, a Republican who resigned from the speakership but retained his seat after being accused of harassment, was speaking on the House floor. Suddenly, Hoover called out a younger female staffer in a way that Flood perceived to be hostile — an attempt to intimidate the staffer.

Last year, she said, she may have pulled Hoover aside in private after to talk to him about it. This year, though, she spoke out on the House floor.

“It was not acceptable, to me, to have that happen,” she said at the time to fellow representatives. “I have never seen that happen on this floor. And I intend for it not to happen again in my presence.”

Women feel as if they have a community behind them now, Johnson said. “That’s the power of this #MeToo movement, is so many people are sharing their stories, and so you know you have people behind you and you will be believed.”

This newfound boldness has the potential to backfire. In one state, a lawmaker who publicly accused another lawmaker told Stateline she feels she is being retaliated against. The House Speaker has told other lawmakers not to work with her, or even talk to her, she said. She asked not to be named because she feared it would hurt her chances of getting a bill that she cares about through the legislature this session.

In New Jersey, political receptions and parties — where harassment may be more likely to occur but where lawmakers have additional opportunities to work together — have been canceled or switched to coffees, said Jean Sinzdak, associate director of the Center for American Women and Politics at Rutgers University.

In many states, though, female lawmakers say they feel supported by their male colleagues.

In Colorado, three male lawmakers who were accused of sexual harassment have faced repercussions. In January, the House expelled state Rep. Steve Lebsock, a Democrat who changed his party to Republican shortly before he was expelled; in April, state Rep. Paul Rosenthal, a Democrat, lost his re-election bid; and this month, state Sen. Randy Baumgardner, a Republican, was stripped of several committee positions. They denied the accusations against them.

State Rep. Faith Winter, a Democrat who recently accused Lebsock of making lewd remarks to her in 2016, said many of her male colleagues have told her recently that they didn’t know women were facing such harassment, but now that they do, they have her full support. That is a big step forward, she said.

“It feels like night and day from where we started to where we are,” Winter said.

It helps, Winter said, that the Colorado House speaker and majority leader are women. Under their leadership, the House voted to expel Lebsock three days after a report from an outside investigator deemed the allegations against him to be credible.

Meanwhile, more women are bidding for states’ highest office this year. A record number of women — 43 so far — have filed to run for governor in the 36 gubernatorial races, according to Rutgers data.

The campaigns are different, too. In the past, women often would try to downplay their gender, Sinzdak said, or try to prove they were as strong as men. Now, she said, “women are leaning into gender as a positive as part of their campaign messaging.”

‘You Have to Be Bold’

In Minnesota, where Cornish and Democratic state Sen. Dan Schoen resigned in November after sexual harassment allegations, one sign that not much has changed, Walker said, is that new cases of alleged harassment continue to crop up. A few weeks ago, a woman who works as an advocate at the Statehouse accused state Rep. Rod Hamilton, a Republican, of touching her without her consent last month in his apartment. Hamilton denied the accusations, and said the touching was friendly, not sexual.

“It’s a little disturbing to me that, with what’s going on around the country, any member can do this type of action,” Walker said.

Just days before the accusations were made public, the Minnesota House changed its harassment policies to cover third parties, such as members of the public, lobbyists and journalists who interact with lawmakers.

The National Women’s Law Center recommends the inclusion of third parties in harassment policies. It also advises legislatures to publicly disclose harassment claims, while protecting the confidentiality of victims. The Maryland Legislature in December decided to begin tracking claims and reporting them annually. The center also recommends creating a process in which an outside entity, not elected officials, investigates claims and recommends punishment. Illinois and Iowa recently made this change.

In Kentucky, Flood proposed a bill that would have defined harassment more clearly, authorized the Legislative Ethics Commission to set up a tip line for complaints, and investigate and resolve complaints. The state has seen a few waves of harassment accusations, first in 2013 against former state Rep. John Arnold, a Democrat, and other staff of the Legislative Research Commission, and this year with accusations against Hoover and three other Republican members of the House.

When her proposal failed to move in the Senate, Flood said, she didn’t “go to the mat throwing a stink about it.” Instead, she said, she wants to work on getting the best language and solutions, and pass something next year.

“You have to be bold, up front, in the moment, and still take a patient mood,” she said. “We can get serious work done if we don’t hurry.”