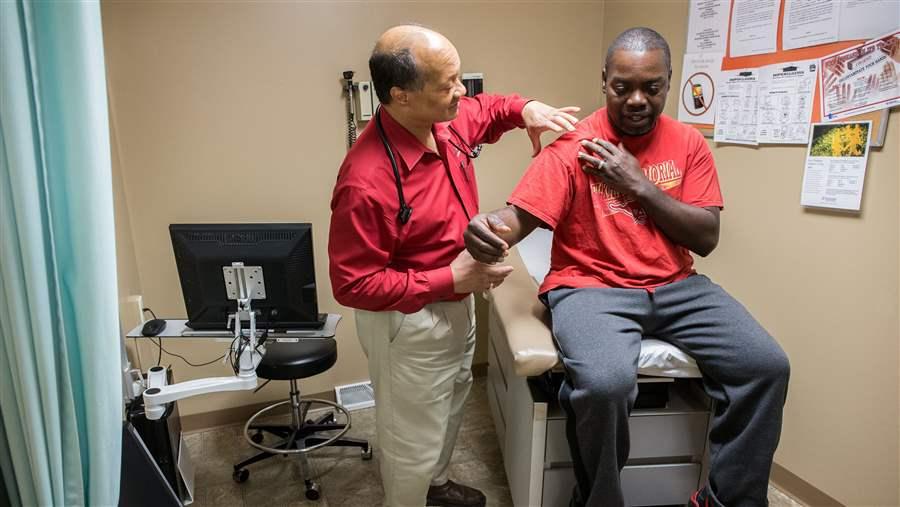 A doctor examines a Medicaid patient at the Heart City Health Center in Elkhart, Indiana. Indiana and other states are enacting stricter Medicaid requirements.

New Hampshire has become the fourth state to get approval from the federal government to require some Medicaid recipients to work.

The Centers for Medicare and Medicaid Services sent a letter to the state this week granting its approval of the state’s proposal to require most working-age, able-bodied adults to work, go to school, get job training or participate in community service for 100 hours a month in order to continue receiving health insurance under the state’s expanded Medicaid program.

Arkansas, Indiana and Kentucky also have received approval to move forward with work requirements under the program, according to the Centers for Medicare and Medicaid Services. Waivers are pending in Arizona, Kansas, Maine, Mississippi, North Carolina, Ohio, Utah and Wisconsin. Most are states with Republican legislatures and governors.

“Work requirements help lift able-bodied individuals out of poverty by empowering them with the dignity of work and self-reliability while also allowing states to control the costs of their Medicaid programs,” New Hampshire Republican Gov. Chris Sununu said in a statement. “They help people gain the skills necessary for long-term independence and success. We are committed to helping more people get into the workforce, as it is critical not only for individuals but also for our economy as a whole.”

New Hampshire has one of the country’s lowest unemployment rates at 2.6 percent in March.

About 187,000 New Hampshire residents received Medicaid benefits as of March 2017, according to state data. Most of them are children, pregnant, disabled or elderly, and are therefore exempt from the work requirements.

FamiliesUSA, a national nonprofit that advocates on health care issues, opposes New Hampshire’s proposal to add the work requirements. In a December letter to the U.S. Department of Health and Human Services, the organization said the requirements would “reduce individuals’ financial stability and lessen their long-term employment prospects, the exact opposite of the New Hampshire’s stated goals.”

The move to require “skin in the game” comes at a time when many states are considering stricter requirements for people receiving welfare benefits, including Medicaid and the Supplemental Nutrition Assistance Program, or food stamps.

In their proposals, states are asking to make several other changes to their Medicaid programs besides the work requirements, such as requiring more recipients to contribute small monthly premiums, insisting on monthly paperwork and imposing lifetime limits on coverage.