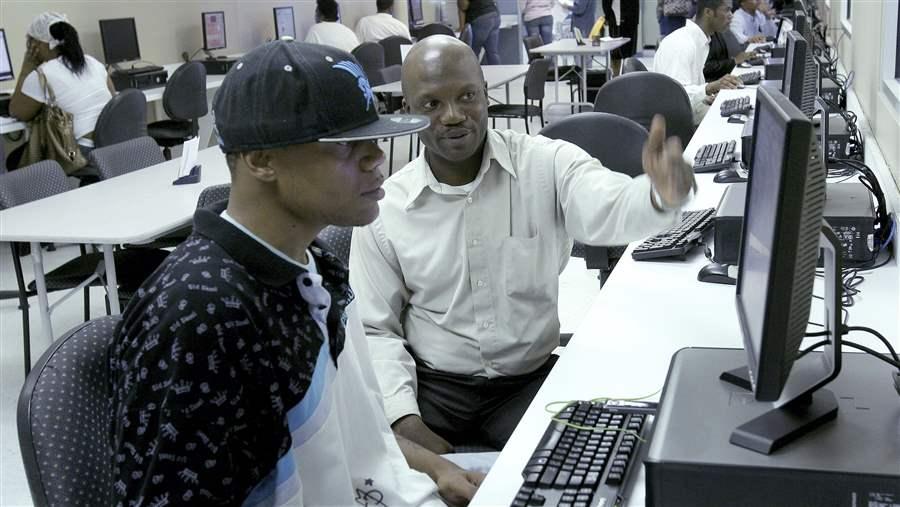 An employment office worker in Tallahassee, Florida, helps a young man look for jobs and send out applications. Policymakers are looking to Nevada as a potential model for success.

BALTIMORE — When the man in the teal hoodie mentioned that he had trained as a pharmacy technician, Lachelle Hill’s voice rose in excitement. “Why don’t I see that on here?” the state job counselor asked, pointing at the paperwork on the table between them.

Hill was counseling Corey, a 30-year-old jobseeker who didn’t share his last name, at a federally funded job center here on the top floor of a shopping mall, an escalator ride away from a Forever 21 and a Cinnabon.

Unemployment insurance beneficiaries are required to look for work, but Hill wasn’t just checking Corey’s paperwork for compliance. She was helping him focus his job search, and trying to steer him toward positions he was qualified for.

Such conversations are central to a reemployment grant program that the U.S. Department of Labor has touted for years. In February, Congress passed a budget bill that would make the program permanent and increase its funding from about $100 million last year to more than $3 billion over the next six years.

To push states to improve their programs further, the law requires that starting in 2023 states must spend a quarter of their money on “evidence-based interventions” that have been proven to get people jobs faster.

But creating evidence-based employment programs can be tricky. While research generally shows that employment assistance helps people get jobs, it’s not always clear why certain programs work well and whether they can be expanded.

The nationwide employment program that Corey’s benefiting from is based on a Nevada model that significantly reduced the amount of time people received unemployment benefits. Studies have yet to determine whether the Nevada approach can get the same results elsewhere.

State workforce and unemployment insurance officials are now waiting for the Labor Department to clarify its definition of “evidence-based.” “We’re all waiting on pins and needles,” said Michelle Meader, who operates Washington state’s version of the employment program.

Back at the job center, Corey said he’d been looking for jobs on roadwork crews and at the seaport, and talking to a friend about starting a day labor business. Hill zeroed in on the brightest spot on his resume: his pharmacy training, which could net him wages of about $15 an hour in the area.

“Sometimes, people crash because they aim too low,” Hill said. Corey explained that his pharmacy technician license had expired, but Hill didn’t bat an eye. “Let’s look into the recertification, and see if we can get you the funds to do that.” 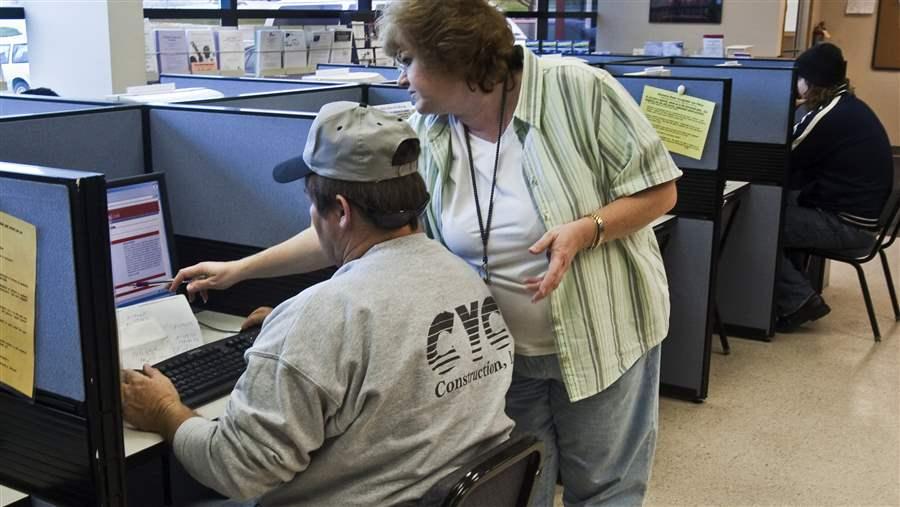 An employment specialist with the Nebraska Department of Labor helps a jobseeker in Omaha.

The current federal reemployment program began as a grant with a slightly different focus called Reemployment and Eligibility Assessment, or REA. The first $18 million was split between 20 states in 2005.

States used the money to require some unemployment insurance claimants to go to a career center for an interview. Staff members would check that the claimant was actively searching for work, share labor market information, and make sure they had a job search plan.

The program was designed to uncover idlers who weren’t looking for work — and thus weren’t eligible for benefits — and to help participants get jobs faster.

A 2011 Labor Department-funded study of the REA program in Florida, Idaho, Illinois and Nevada found that, on average, participants reduced their time receiving benefits by over a week compared with a control group.

The Nevada program had the best results: It cut time receiving benefits by almost three weeks, saving $805 in payments on average. For every dollar spent on administering the program four were saved on unemployment benefits, according to the study conducted by IMPAQ International, a research and evaluation firm in Bethesda, Maryland.

The researchers said Nevada’s program may have been successful because it used the same staff to conduct eligibility checks, help claimants make job search plans, and also — thanks to a separate federal grant — connected participants with more career services.

Claimants felt like the job counselors were there to help them, not put them through a compliance exercise, said Lynda Parven, deputy administrator of the Employment Security Division at the Nevada Department of Employment, Training and Rehabilitation. “Most people saw it not as a stick, but as a carrot.”

The Labor Department restructured the grant requirements in 2015 to reflect Nevada’s model. The program now emphasizes job assistance targeted to a claimant’s needs and requires staff to refer participants to at least one other career service, such as a resume workshop at a job center.

The employment program is now active in almost every state. But while the prior version of the grant required states to randomly select participants, the current version selects participants from higher-need populations, such as discharged veterans and people likely to struggle to find a job. States use algorithms to determine who falls into the latter group.

But Can It Be Repeated?

The Labor Department has long held up the Nevada results as a success story. In last year’s budget request, for instance, the agency called the reemployment program “a proven activity that saves an average of $536 per claimant.” The figure is seemingly taken from a 2012 study of the Nevada REA program, also by IMPAQ International.

But researchers still are not sure what caused Nevada’s program to work so well, if it can be replicated, or if the current version of the program delivers the same results.

The lack of clarity is true of many programs that help get people back to work. “A lot of the evidence on these interventions has been kind of at a black box level,” said Yvette Chocolaad, policy director for the National Association of State Workforce Agencies, at a recent Urban Institute event. While the overall outcome may be good, it may not be clear what components of a program make a difference.

Employment programs involve many factors. While research highlights a few strategies that work, such as friendly emails and follow-up messages that encourage claimants to come to their appointment at a job center, others are hard to quantify or replicate, such as a program’s leadership.

Jacob Klerman, principal associate of Abt Associates, an evaluation company based in Cambridge, Massachusetts, is wrapping up a Labor Department study that compares REA programs in multiple states. He wouldn’t remark on the yet-to-be-published findings, but said it wasn’t clear if the Nevada model could be copied. “The results from Nevada are basically twice as large as any other state. So Nevada is an outlier.”

As for the current version of the reemployment program, it’s too new to have been subjected to rigorous academic studies. Many state agencies are still crunching the first year of data on, for instance, whether the new model has decreased the amount of time people spend receiving benefits.

Maryland’s data so far, collected by the unemployment insurance office, shows that last year over 18,000 people attended a job services orientation, and almost half as many made it to a follow-up session, such as a resume workshop.

The program’s most important element may be the staff. At the job center here in Baltimore, they are a friendly bunch, quick to hand out inspiration. On a recent Friday morning, a receptionist in the lemon-walled reception area urged on a young man with an aphorism: “You’re a go-getter. Good things come to those who wait, but better things come to those who go out and get it.”

In a cubicle on the other side of the room, Hill deftly guided reemployment program participants toward services that might help their job search. She asked a recent college graduate laid off from a mortgage company if he was tailoring his resume to every job application, and she suggested he sign up for a resume workshop to get some tips.

Then Hill sat down with a young woman with braces and a trendy bob who said she was eager to take any job at all. The woman had previously worked as a security guard and in customer service, and she seemed a little lost and unsure of herself. Hill took a firmer, more motherly approach, registering her for a career aptitude test and an interviewing workshop and encouraging her to come back later for more one-on-one counseling. Hill asked if the woman had access to a computer at home — she didn’t — and told her she was welcome to use the job center’s computers.

In the next room, the program manager for the Maryland reemployment program, Kari Pompilli, was also interviewing claimants. “Our goal is to not let them fall into a rut of unemployment,” she said later. If jobseekers confer with someone who listens to them and is optimistic about their search — “That’s half the battle, for some people,” she said.