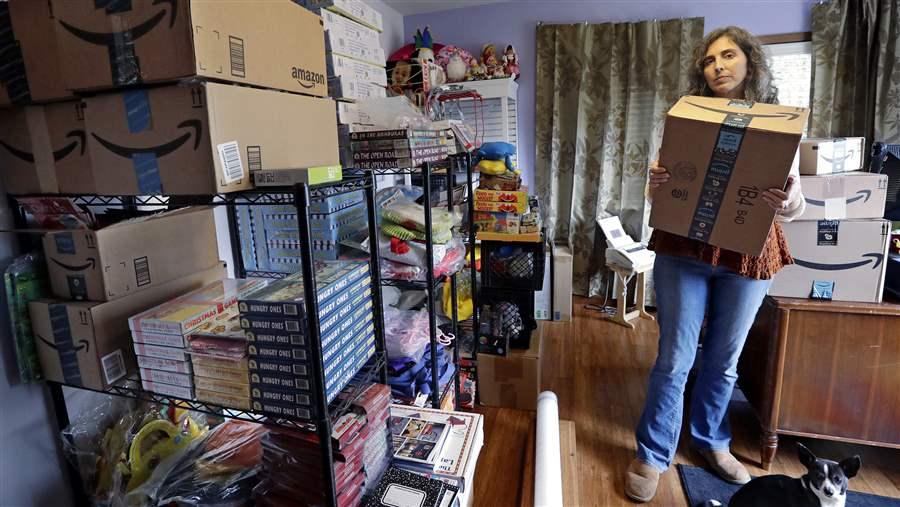 Adrienne Kosewicz, owner of Play It Safe World Toys, in her home office in Seattle. An internet seller, Kosewicz pays for tax collection software to handle payments to her home state. Georgia just became the latest state to enact a law requiring collection by online sellers.

Without comment, Georgia Gov. Nathan Deal, a Republican, signed legislation requiring online retailers to collect and remit sales taxes on purchases made on their sites, or send notices to the consumers that they owe the sales tax.

The law would apply to retailers with at least $250,000 in Georgia sales or 200 individual transactions in the state in a given year. Retailers would have to send the notices to customers who spend at least $500. Amazon, the nation’s biggest online retailer, already collects sales taxes on its purchases in Georgia and most other states.

Georgia and 37 other states have some kind of law on the books aimed at expanding sales tax collections to online sellers. Some of the laws would only take effect after a favorable Supreme Court ruling. Other states are attempting to enforce the collections now, although some are facing legal challenges. The U.S. Supreme Court heard arguments in a test case about online sales tax in April. In South Dakota v. Wayfair Inc., the state contends that a 1992 high court ruling prohibiting the collection of sales taxes from any seller that does not have a physical location in the state is outdated. The justices seemed split on the issue. A ruling is expected this summer.

A Georgia Fiscal Research Center estimate in fiscal 2016 predicted that Georgia could collect more than $200 million annually in state sales taxes from internet purchases and the number was expected to rise by 8 percent every year until 2022.  Other estimates have been higher. The National Governors Association estimates the annual total for the 45 states that have a sales tax at $26 billion.

If the Supreme Court gives the go-ahead, the Georgia law would take effect Jan. 1, 2019.