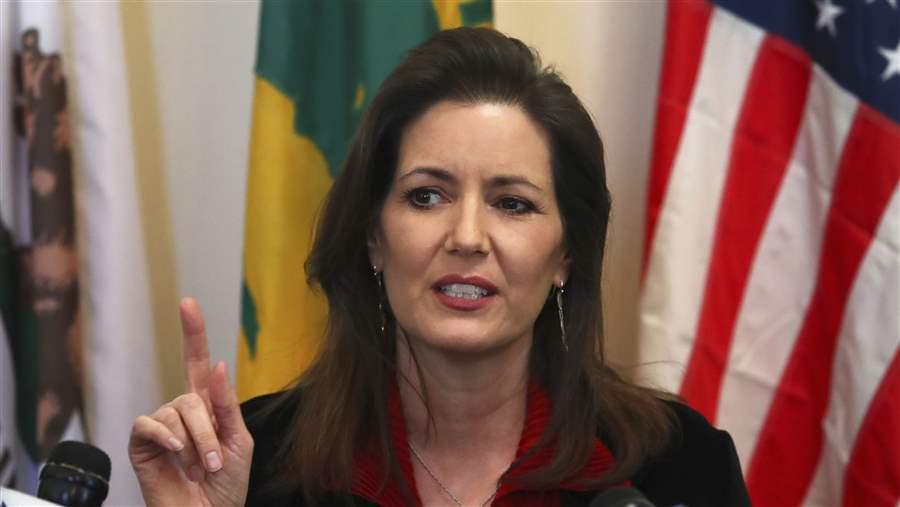 The mayor of Oakland, California, Libby Schaaf, warned residents that federal immigration officers were planning raids. She reminded them of their rights under a new California sanctuary law. A new report documents the struggle between immigrant-friendly cities and the federal government over arrests and deportations.

BALTIMORE — One recent early morning, as the sun rose, a young mother knocked at the Sacred Heart Parish rectory door.

In a cramped study, she told the church pastor, the Rev. Bruce Lewandowski, what had happened. Feeling ill, she had come home early from her overnight job cleaning offices and found a relative sexually abusing her handicapped daughter. She had gathered up the child and her other children and brought them to the church.

“Why didn’t you call 911? You have to call 911,” the pastor told her. The woman, he recalled later, broke down. “If I tell the police, they’ll arrest me, too,” she said. As an unauthorized immigrant, she was terrified of talking to the police despite a city policy that bars officers from asking anybody about their immigration status.

A year and a half of struggle between the Trump administration and immigrant-friendly states and cities has led to a stalemate: So-called sanctuary cities and states are reducing deportations, but raids aimed at stirring fears are having their intended effect, according to a new yearlong study by the nonpartisan Migration Policy Institute. Federal immigration officials told the authors of the report that in places where local law enforcement won’t help them deport immigrants who have landed in jail, their alternative is to look for such people on neighborhood streets.

ICE officers said that to the extent jurisdictions do not cooperate their agency has little choice but to carry out enforcement activities in neighborhoods and other community locations, even though it is not as efficient a use of their time or resources.—Migration Policy Institute study

Stymied by local resistance, the Trump administration may never get deportations back to the recent high of 200,000 in 2010, under President Barack Obama. But highly publicized raids in sanctuary cities are taking a toll on immigrants’ peace of mind.

“They’re sending a message. And the message is being received,” said Randy Capps, director of research for the Migration Policy Institute, a think tank based in Washington, D.C. “When we were on the street in Chicago,” he said of the sanctuary city, “we heard the same expressions of anxiety as we did in places like Houston and suburban Atlanta, the fully cooperative jurisdictions.”

That fear and anxiety has caused unauthorized immigrants to retreat from public life in many cities, immigrant-friendly or not. Immigrants already are more reluctant to report crimes and to use health services and other benefits, the report concluded.

In many cities, crime reports by Hispanics fell after the start of the Trump administration, especially for sexual assault and abuse cases, even as reports by non-Hispanic people rose.

The Migration Policy Institute report underscores the unevenness of immigration enforcement. The U.S. Department of Justice has threatened legal action against many cities that don’t cooperate with ICE, and Texas has curbed sanctuary policies in Travis County, home to Austin. At the same time, California is facing pushback from San Diego and Orange counties as it implements a statewide sanctuary policy. 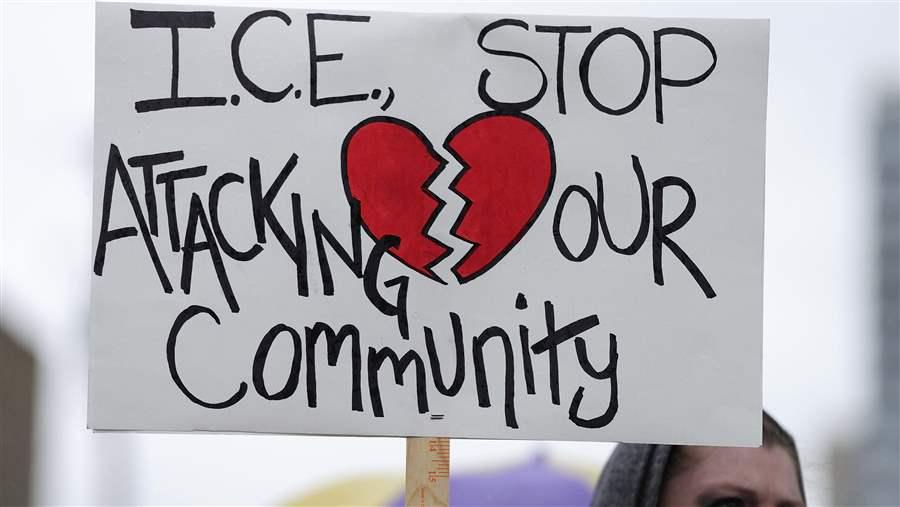 A protester stands outside the Immigration and Customs Enforcement building in Portland, Oregon.

Chicago and other immigrant-rich sanctuary cities, along with California, have been able to control deportations over minor crimes by refusing ICE access to local jails through so-called detainers seeking to take custody for possible deportation.

In cities that are cooperating with federal immigration authorities, even a traffic arrest can expose an immigrant to deportation, especially if a court has ordered deportation or the individual has returned after a previous deportation.

“About 1 in 10 unauthorized immigrants is in this situation where they’ve already exhausted their rights under the legal system,” said immigration attorney Simon Sandoval-Moshenberg of the Legal Aid Justice Center in Falls Church, Virginia. “They’ll be deported basically as soon as ICE can arrange a flight.”

Local raids can help federal authorities recover some of the potential prisoners lost to sanctuary policies, but not many, the study found. Six percent of prisoners freed because jails declined an ICE request, or “detainer,” are later arrested by ICE.

That’s frustrating to the immigration officials the Migration Policy Institute interviewed for its study.

“To the extent jurisdictions do not cooperate,” ICE officers told MPI, “their agency has little choice but to carry out enforcement activities in neighborhoods and other community locations, even though it is not as efficient a use of their time or resources, nor does such enforcement yield the numbers that can be identified by screening cases in local jails.”

Such raids also result in the arrests of bystanders, called collateral arrests, if officers come across other unauthorized immigrants while looking for those targeted for crimes or immigration-related offenses. More than two-thirds of the 650 arrested in one major operation were collateral arrests of people who were not targeted, many simply bystanders, according to the MPI study.

Such arrests can spread fear but don’t necessarily mean immediate deportation. An unauthorized immigrant without a deportation order is entitled to a court hearing. They may wait years to get one because court dockets are so full, said Sandoval-Moshenberg, who represents a dozen people arrested as bystanders during raids last year in Virginia.

“They stop you and say, ‘Have you heard of so-and-so?’ You say no and then they say, ‘What about you — do you have papers?’” Sandoval-Moshenberg said. None of his clients have been deported, he said, and some won’t even face court hearings until after the 2020 election. 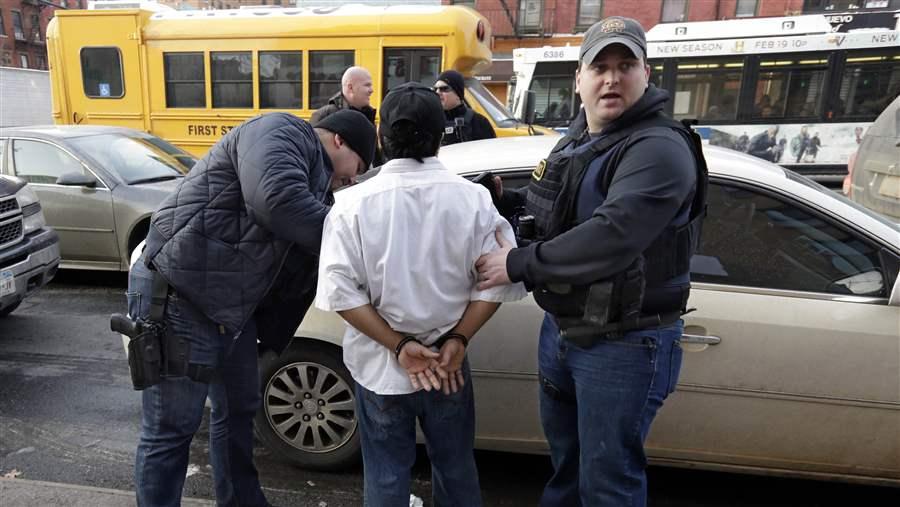 Without local officials feeding arrestees to ICE through detainers and other methods of cooperation, the Trump administration does not have the manpower to get those numbers back up to Obama-era levels. California, home to a fifth of the nation’s estimated 11 million unauthorized immigrants, reduced cooperation to a new low last year by banning any communication with ICE about suspects charged with minor crimes.

“The great variation in how states and localities cooperate with ICE,” the study says, “means that the fortunes of an unauthorized immigrant in Texas, Tennessee, and Georgia, where the mere act of driving can result in arrest and deportation, are entirely different than in California, Chicago, and New York, where immigrants can be arrested for a variety of crimes and still not be taken into ICE custody.”

If stress is unpredictable even in sanctuary cities, the same is true for strict-enforcement areas such as Prince William County, Virginia, a suburb of Washington, D.C. The county gives full cooperation to ICE and detainer requests were up 16 percent between 2016 and 2017, but they are still down by a third from 2013, according to the Migration Policy Institute.

Dimas Navarro, a middle-aged heating and air-conditioning worker from El Salvador who lives in Prince William County with legal work permission, said crackdowns come and go in the immigrant community.

In the past, Navarro said, hostility drove Central Americans to neighboring Maryland, where they were more welcome. But today Navarro thinks they’re starting to return to Virginia, driven by plentiful work in construction.

“There’s good times and bad times. It depends on who’s in power,” Navarro said on a recent day. “They were stopping everybody checking papers for illegal immigrants. Now, no. Now everything is OK. You never know when it’s going to change, though.”

Navarro said he was only stopped by police twice while driving, once for not coming to a full stop at a stop sign, but had no trouble since he has a driver’s license. The MPI report found that suburban police were more likely to use traffic enforcement to target immigrants. Gwinnett County in suburban Atlanta, for example, held as many as 184 immigrants for ICE in a month last year — most had been arrested on traffic charges.

“Our clients are getting arrested for things they should not be, or that white people would not be arrested for,” said Lisa Johnson-Firth, an immigration attorney in Manassas, Virginia.

Jessica Vaughan, director of policy studies at the Center for Immigration Studies, a think tank that favors less immigration, defended the ICE practice of arresting people in the community during raids.

“ICE’s goal in making arrests is not to sow fear but to arrest and remove deportable criminal aliens who have no right to be here,” Vaughan said, adding that they “should not be allowed to remain at large to prey on new victims.” ICE did not immediately reply to a request for comment.

In Baltimore, Lewandowski said he was able to calm his parishioner and get police to investigate the sexual assault without questioning the woman’s immigration status. But not all his parishioners have been so lucky: Recently a young man, a husband and the father of small children, was pulled over by ICE after buying supplies at a lumberyard.

“He said, ‘How did you know I was here?’ and they said, ‘Oh, we’ve been following you for a couple of weeks, but your family was always with you and we didn’t want to have to arrest them.’

“I guess you could say that was ICE being kind,” Lewandowski said. “But he was deported, and now his wife is alone here and she has to learn to find a job and support that family. They just created a single-mother family.”