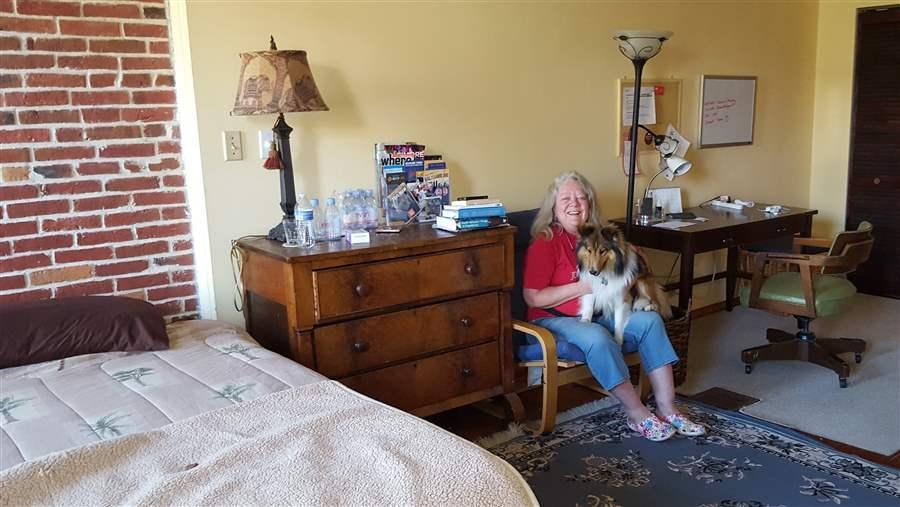 Baltimore resident Jeannette Belliveau, who rents a couple of rooms in her historic townhouse to short-term guests, sits with her dog, Copper, in one of the guest suites. States are having a hard time regulating the short-term rental industry.

Jeannette Belliveau lives with her dog and two cats in a 19th century house in the Upper Fells Point section of Baltimore, not far from Johns Hopkins Hospital, and rents out a couple of rooms for short-term stays to make a living. In other parts of the city, Al Hallivis, a real estate investor and single dad, owns a half-dozen houses that he also rents by the night.

A few miles toward the city’s picturesque harbor, a variety of hotels offer traditional overnight stays.

All three models cater to Baltimore visitors, but that’s where the similarity ends.

Belliveau, Hallivis, and hotels have different business models, different perspectives and different agendas. These competing constituencies help account for the difficulty states have had in regulating and taxing the short-term rental industry, even as some cities have taken action to regulate short-term rentals. 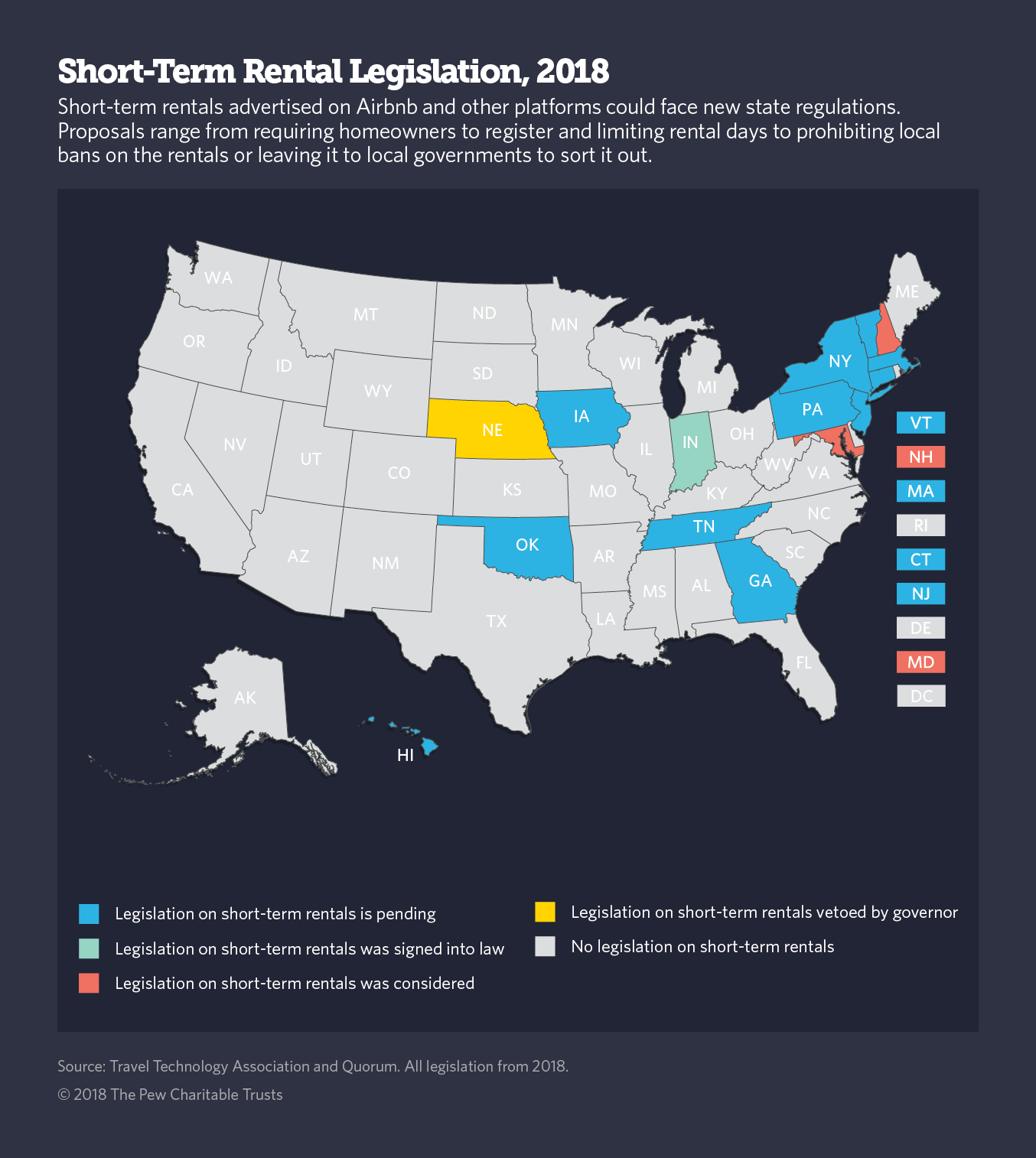 “One-size-fits-all state regulation may not always be the most appropriate policy response, and states may therefore choose to allow local governments to regulate,” said Kellen Zale, a law professor at the University of Houston who has done research on the short-term rental market.

Some big cities, such as New York, saw the short-term rentals as a threat to the rental market based on long-term leases, as well as to traditional hotels. New York last year allocated extra funding to enforce a state law restricting rentals for fewer than 30 days unless the host is present and there are no more than two guests.

Other cities saw the short-term rentals as a potential source of income and sought to expand tourist or hotel taxes to the new schemes, with varying success. 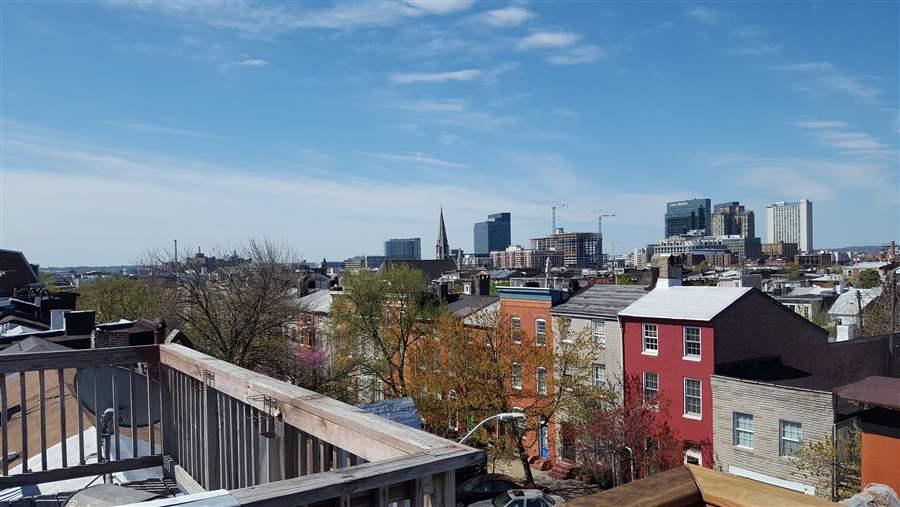 The view of downtown Baltimore from the roof of Jeannette Belliveau’s historic townhouse, which she rents to short-term guests.

San Francisco this year began limiting the number of nights a year absentee owners can rent their properties through Airbnb or similar platforms. Owners who live in their residence can rent it out without limit. Owners also must pay a $250 registration fee to the city.

In Montgomery County, Maryland, a suburb of Washington, D.C., regulations go into effect in July that will limit the short-term rentals to the homeowner’s primary residence. Rentals where the homeowner is not present will be limited to 120 nights in a calendar year.

Were Baltimore County to adopt that type of rule, Hallivis said it would kill his business model.

“I’m opposed to taxing rooms in my house. I’m just Mrs. Murphy,” Belliveau said, referring to the hypothetical elderly widow who has converted a portion of her home into a rental apartment. Under federal housing law, the “Mrs. Murphy’s exemption” provides that if a dwelling has four or fewer units and the owner lives in one of them, that home is exempt from the Fair Housing Act.

Troy Flanagan, vice president of government affairs and industry relations for the American Hotel and Lodging Association, said his group doesn’t oppose “true home sharing” like Belliveau’s — it objects to people who have rental property that they use exclusively for short stays. The industry group has mounted a coordinated attack against those multi-dwelling short-term rental owners. 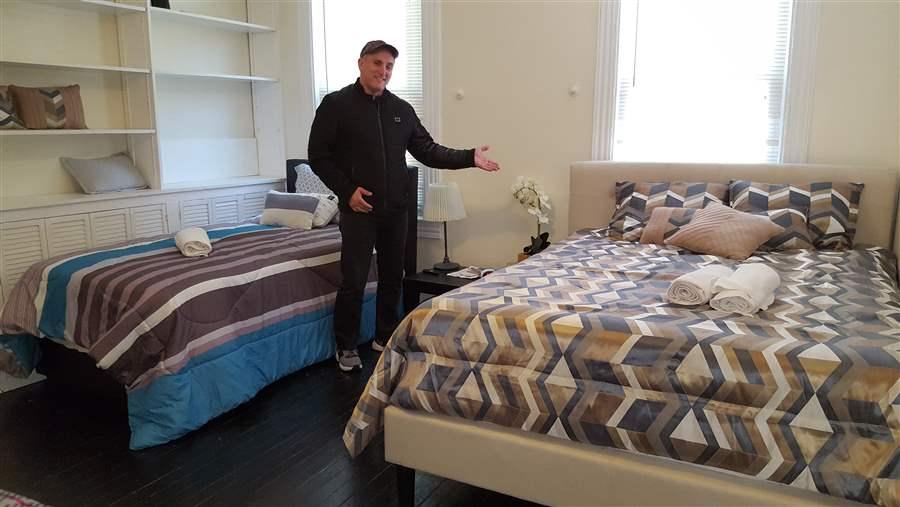 Al Hallivis in a Baltimore property of his, one of half a dozen short-term rental houses he owns.

“Increasingly what’s taking place on those platforms is hosts that have dozens of units that are available every day of the year, and that’s a hotel,” Flanagan said. “Home sharing is sharing your home, not sharing your second, third or fourth home.”

Hallivis insists that his houses are not hotels, and that he helps neighborhoods by fixing up vacant houses and turning them into nice-looking properties. By bringing in people with money to spend, he said, he also gives a boost to neighborhood restaurants, mom-and-pop stores and taverns.

Private residences generally are not held to the same safety standards, such as requirements for sprinkler systems or handicapped access, as commercial rentals. Hotels in general must have those, as well as emergency exit directions, emergency lighting and fire doors. Hallivis said his homes have fire extinguishers and smoke detectors.

He noted that in fiscal 2017, about $17 billion was spent in Maryland on hotels and the rest of the tourism industry, and $42 million was spent on short-term rentals from Airbnb. “We don’t hurt the hotel industry at all,” he said. “They want a monopoly.”

In addition to Maryland, about 15 states debated bills to regulate the short-term rental industry this year. Only one, Indiana’s, was signed into law. Nebraska’s governor vetoed a bill approved by that state’s Legislature. A bill to regulate the industry also died in Hawaii.

The Indiana bill protects the ability of homeowners to offer short-term rentals, and prohibits cities from banning rentals of a primary residence, while allowing them to impose fees or taxes. The bill vetoed in Nebraska was similar.

In New Albany, Indiana, just across the Ohio River from Louisville, Ruth Ann Floyd rents out one room in her 1880s-era house. Reached just days before the Kentucky Derby, she said she’s booked solid for Derby week. A 69-year-old retiree from General Electric’s refrigerator manufacturing plant, Floyd is pleased that the state protected her little rental business but concerned about the fees that the city might impose.

“Every bit of money I take in I put back into the house,” she said as grandchildren shrieked in the background. “If the city comes up with a big fee, I’m not going to keep doing it.”

New Albany’s city council president, Al Knable, said he is not in favor of large fees, but collecting the current 4 percent tourist tax — now just assessed on a couple of hotels in the county — might be appropriate. He’d like to see Airbnb and the other platforms collect and remit the tax, not the local homeowners.

The proposal that passed the Indiana Legislature and was signed by Republican Gov. Eric Holcomb in March would not restrict owner-occupied rentals. But it would limit how many days absentee owners can rent their properties and allow for rules on which amenities, such as parking, they must provide. The law also allows for local permitting and taxing.

Maryland state Sen. John Astle, who authored the bill to regulate and tax short-term rentals in his state, said there was stiff resistance to a statewide bill, particularly the part about collecting hotel taxes. Astle is ready to concede that regulations should be left to local jurisdictions. But the tax issue is dependent on the state Legislature.

The Anne Arundel County Democrat said he plans to meet with city officials in his hometown of Annapolis to press his case for local regulation. He said short-term rentals have detracted from his city’s neighborhood feel, and that “if you are going to rent something, you ought to have the health and safety issues that are required in any kind of commercial rental.”

But Matt Kiessling, a vice president at the Travel Technology Association, which represents online platforms, says the travel industry is big enough for a variety of accommodations.

“Hotels are ripping and roaring from a business standpoint, with the highest occupancy rate ever,” he said. “Short-term rentals are exploding. … One isn’t taking away from the other; the pie is just getting bigger. All the internet has done is make that market more efficient by allowing travelers to find a home and homeowners to rent a home.”