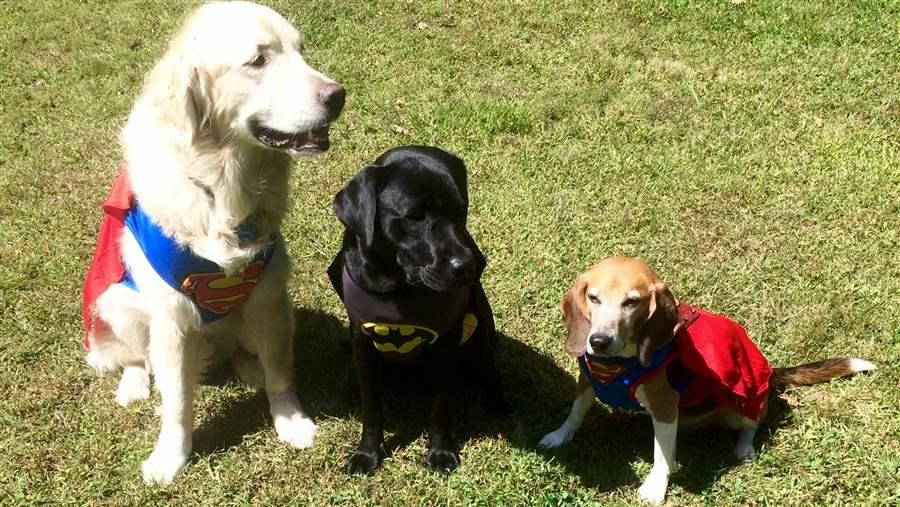 Tucker the beagle (right) was adopted after years in a research laboratory. Seven states, now including Maryland, have enacted laws requiring researchers that use cats and dogs to find homes for the animals that survive testing.

Every day, in labs across the United States, researchers experiment on thousands of cats and dogs. They test new surgical techniques, inoculate the animals with experimental drugs and remove organs, all in the name of advancing human knowledge and developing consumer products such as face creams and window cleaners.

Until recently, no laws covered what should happen to animals that survive the lab relatively intact. That is quickly changing.

Maryland last week became the seventh state since 2014 to require all research facilities to make efforts to adopt out healthy, surviving cats and dogs to homes.

The changes are coming despite opposition from top universities that have long been sensitive to animals’ well-being, their representatives say, but don’t want the extra paperwork that might go with adoption programs. Johns Hopkins University in Maryland, the University of Illinois at Urbana-Champaign, and several private and public universities in California initially opposed the measures. Some dropped their opposition, though, after gaining some concessions in the wording of the bills.

Johnson and Johnson, makers of pharmaceuticals and health and beauty products, said in an email to Stateline that it believes healthy dogs that it uses in testing should be placed for adoption (the company says it doesn’t test on cats), and that is the company’s practice in Belgium. “We have also adopted out dogs in the US on a limited basis,” wrote Kellie McLaughlin, a company spokeswoman. “Based on those successes, we are creating an internal policy that would allow us to adopt out as a standard practice.” 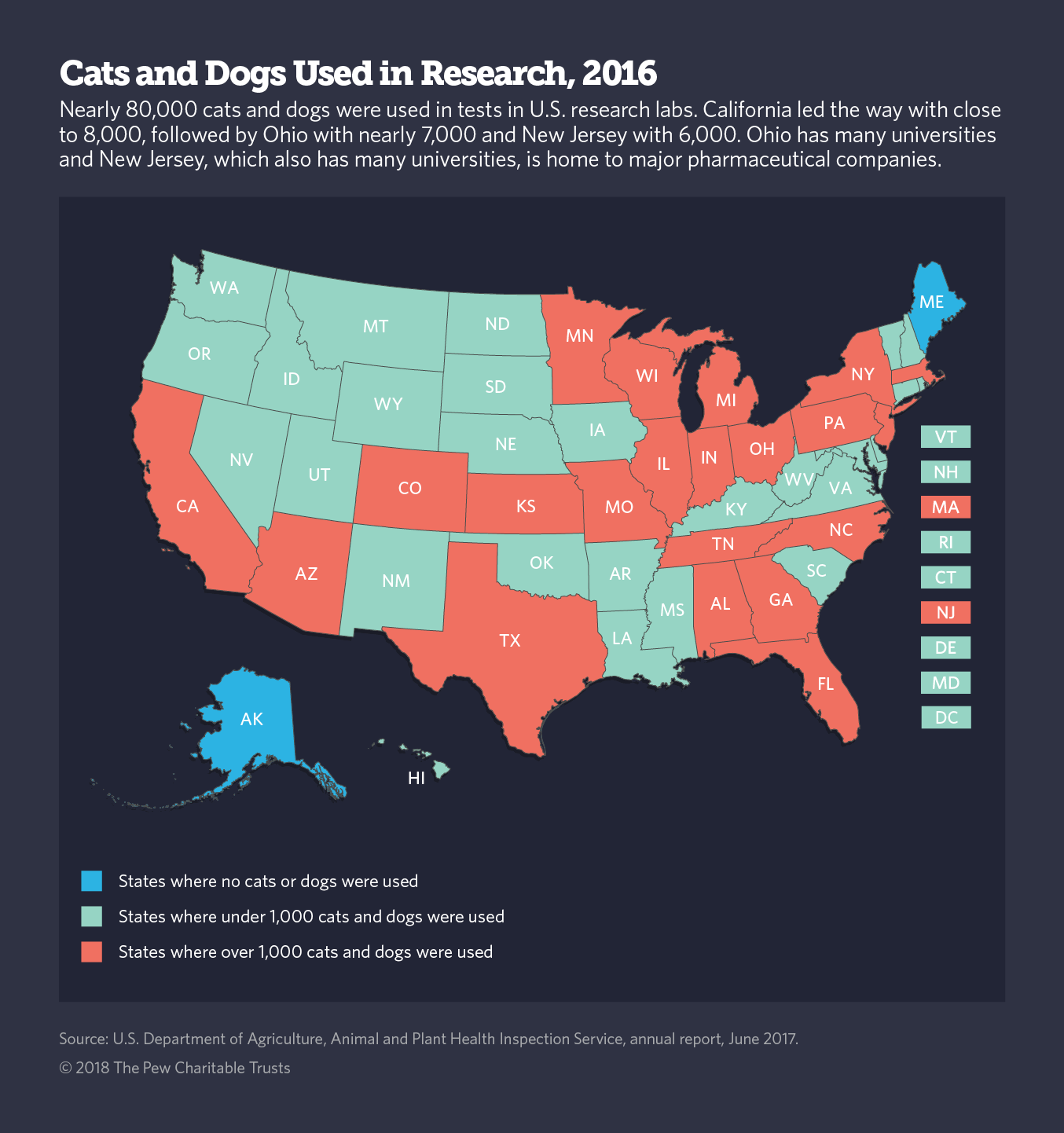 The laws do nothing to impede research; they only create a pathway for surviving animals to find their way to welcoming homes and new experiences as beloved pets.

In the labs, “they never touch grass, never feel sunshine, never have adequate play time or social time,” said advocate Matt Rossell, the campaign and policy director for the California-based Rescue and Freedom Project, an animal welfare organization that is adamantly opposed to the use of animals in research and is lobbying for the bills.

The laws are often called “Beagle Freedom” measures because, animal welfare groups say, beagles are favored by researchers for their gentle natures.

That’s certainly true of Tucker, an 8-year-old beagle adopted last summer by Christine Mariano and her partner, Jon Hagberg, of Sterling, Massachusetts. Before that, Tucker had lived in a New York laboratory and then briefly at a foster home in Maine. Mariano said Tucker came out of the lab without a name, but with a stamp inside his right ear for identification.

“He is playful and happy and sweet and doesn’t carry along any of the negativity you might expect of a dog that’s been tested on,” said Mariano, who doesn’t know the specific lab or the type of testing that was done on the dog. Many labs that surrender animals insist on non-disclosure agreements for fear of being targeted by animal welfare activists.

In April, Tucker made an appearance on the floor of the Rhode Island House of Representatives in support of legislation there, wagging his tail nonstop, accepting treats and, in nonpartisan fashion, happily accepting caresses from both Democrats and Republicans. With his help, the bill passed without dissent. It’s now headed to the state Senate.

Several other states — Delaware, Iowa, Massachusetts and New Jersey — are considering similar measures this year, according to the Rescue and Freedom Project. Aside from Maryland, six other states — California, Connecticut, Illinois, Minnesota, Nevada and New York — have enacted laws encouraging research animal adoptions. 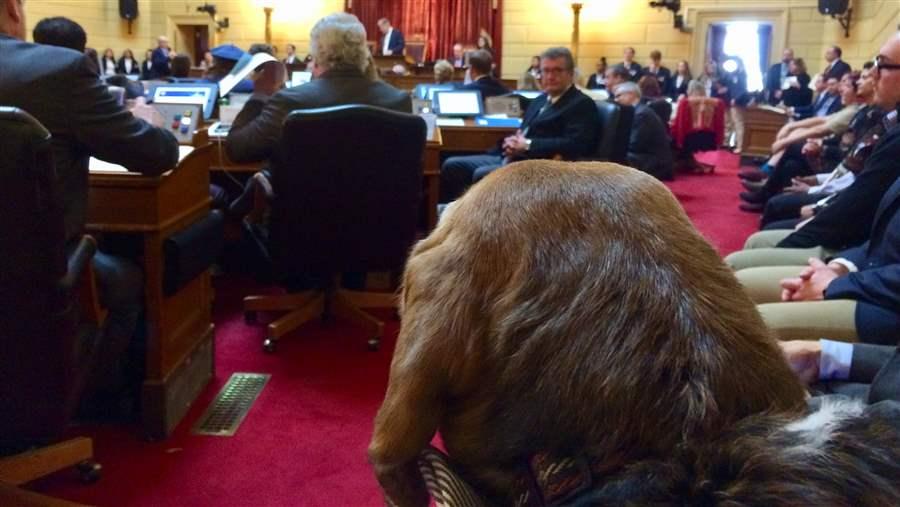 Tucker the beagle peers across the floor of the Rhode Island House of Representatives, where in the spirit of bipartisanship he welcomed petting from both Democrats and Republicans.

The Maryland law was the culmination of a three-year effort by Democratic Del. Benjamin Kramer, though he didn’t sound much like a victor when reached last week, the day before Republican Gov. Larry Hogan signed the legislation.

“The bill is unenforceable,” Kramer said, echoing remarks he made on the House floor on the day of the final vote. “I didn’t want my colleagues to have the misbelief that we had made a significant accomplishment because we had not.”

He felt that way because Johns Hopkins University and Hospital and Health System, Maryland’s largest employer, successfully lobbied to strip the bill of reporting requirements.

The original bill would have required them to submit to the state documents identifying the animal rescue organization that received each dog or cat from the facility, in addition to requiring research facilities to find homes for the animals. Kramer vowed to continue fighting for the reporting requirements, which no other state has, according to animal welfare advocates.

Rianna Matthews-Brown, associate director of state affairs for Hopkins, which is headquartered in Baltimore, said that the reporting requirements would have been burdensome on top of rigorous federal requirements, a claim Kramer dismissed as vastly overstated.

Matthews-Brown said the reporting requirements could put the university and health system at a competitive disadvantage since none of the other states with similar laws imposed that requirement.

“The additional layer of oversight could lead researchers to leave the state or not come in the first place,” she said.

Matthews-Brown also said that reporting requirements could subject research facilities and adopters of the animals to harassment from “fringe” animal welfare organizations. Activists have gone so far as desecrating the graves of their targets’ relatives, according to the Federation of American Societies for Experimental Biology, which is based in Bethesda, Maryland.

But in response to that concern, Kramer had agreed to an additional provision that would have withheld the information from the public.

Kramer also wanted all surviving animals to be sent to rescue organizations rather than being privately adopted under the logic that such groups are experienced in dealing with animals with special needs.

But Hopkins also was able to force another change to enable research facilities to first try to place the animals privately before handing them over to an outside organization.

Matthews-Brown said that has long been Hopkins’ practice. Often it gives animals to willing employees. If there are no takers, she said, Hopkins places the animals with rescue organizations. She said that Hopkins’ vets and caretakers of the animals know them extremely well and are well-suited to find appropriate placement for them.

She said the new law will not require Hopkins to change any of its current practices. The same may not be true of other public and private research facilities around the state, she said.

Between 2014 and 2017, Matthews-Brown said, Hopkins used 28 cats for research and all were adopted or will be. In the same years, the institution used 155 dogs and 24 were adopted. The rest died during testing or had to be euthanized, she said.

In 2016, nearly 19,000 cats and 61,000 dogs — bred specially for research purposes — were used in research laboratories across the United States, according to the Animal and Plant Health Inspection Service of the U.S. Department of Agriculture. Animal research is a major part of industry and top universities’ work, and institutions must provide oversight to ensure animal safety. 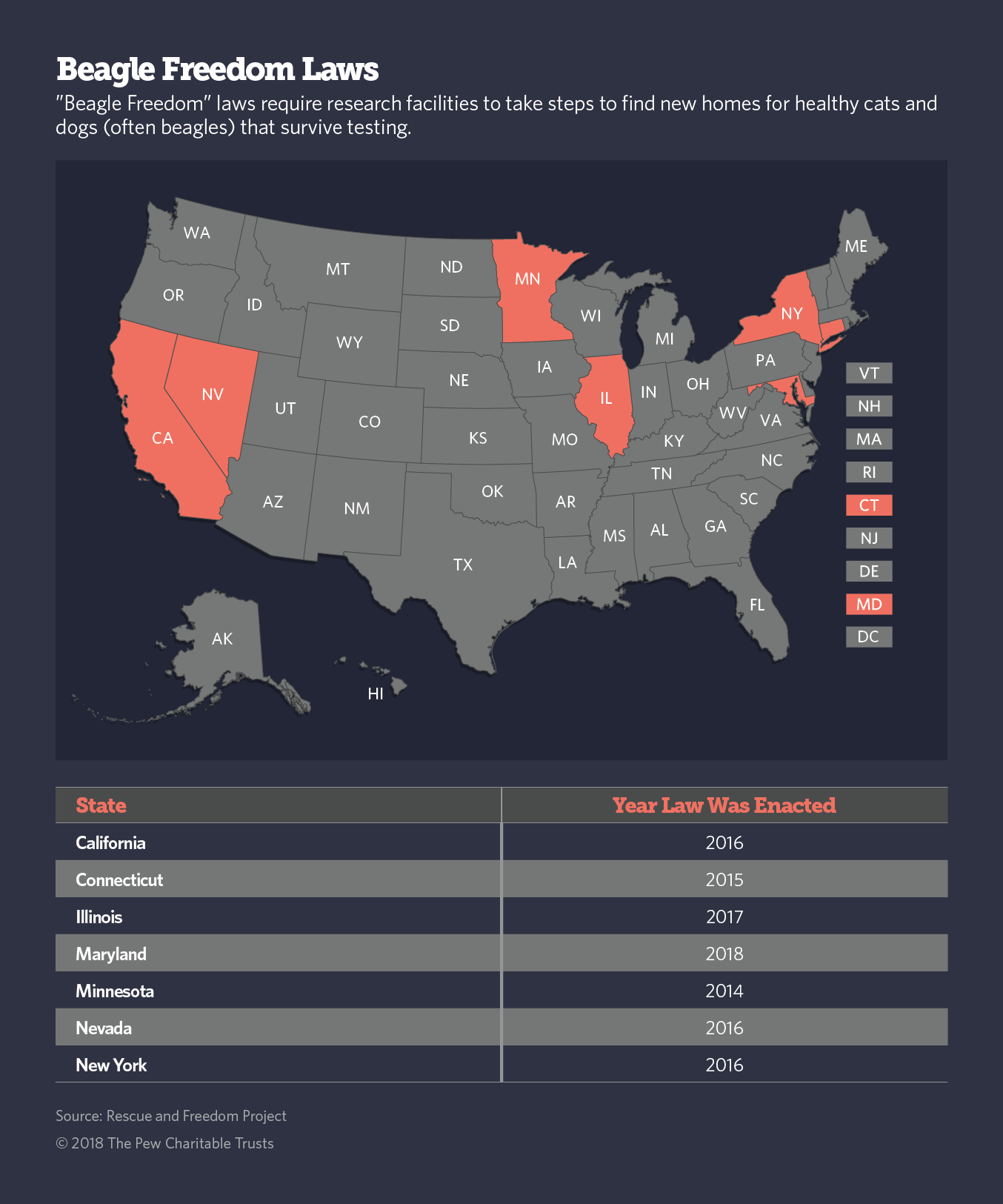 Testing on animals goes back hundreds of years, but it was only in 1966 that the U.S. Animal Welfare Act was enacted. Amended several times since then, the law sets out minimum standards for the humane treatment of animals used in scientific experiments that frequently result in deaths.

Dogs often are used to help develop procedures and tests to improve the treatments for cardiac and pulmonary disease and age-related deterioration of bones. Cats have been used to study neurological, cardiovascular and respiratory diseases, the immune system and vision.

While Kramer was disappointed that the reporting requirements didn’t make it into the bill, animal welfare groups were less disheartened.

“We’re making it against the law for them to not have this program,” said Emily Hovermale, the Maryland director of the Humane Society of the United States. “We don’t need to have this additional piece.”

Animal welfare organizations say that in most cases, animals used in labs are treated humanely and socialize well with humans. Many labs, similar to Hopkins, arrange for healthy survivors to be adopted. Generally, those that emerge from the lab with mental or psychological trauma are euthanized or kept permanently at the facility.

Others are like normal animals, but without the same experiences. They must be taught what other pets already know, said Patti Strand, president of the National Animal Interest Alliance, an animal welfare organization based in Portland, Oregon. For instance, many have never been walked on a leash or heard the honk of a car horn. They may be unfamiliar with grass or carpeting.

“It’s like coming out of jail and into society,” said Marcia Kramer, director of legal and legislative programs for the National Anti-Vivisection Society in Chicago, a group that opposes animal research.

Organizations that receive animals from labs usually send them to foster homes for training before adopting them out to permanent homes.

The Beagle Freedom laws apply only to cats and dogs, not to guinea pigs, rabbits, monkeys, sheep and other animals used in scientific research. But Rossell, of Rescue and Freedom, isn’t shutting the door to a broader approach sometime in the future.

“When this bill originated we thought a good starting point was the animals people can best identify with and want to bring into their homes,” Rossell said. “We would be open to other species.”