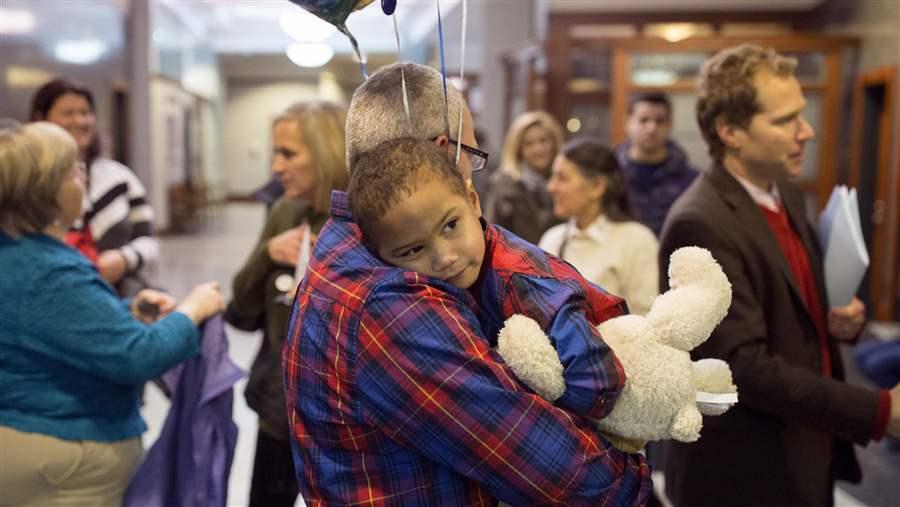 A new federal law, propelled by the belief that children in difficult homes nearly always fare best with their parents, effectively blows up the nation’s troubled foster care system.

Few outside child welfare circles paid any mind to the law, which was tucked inside a massive spending bill President Donald Trump signed in February. But it will force states to overhaul their foster care systems by changing the rules for how they can spend their annual $8 billion in federal funds for child abuse prevention.

Most child welfare advocates have hailed the changes, but some states that rely heavily on group homes fear that now they won’t have enough money to pay for them.

The federal government won’t release compliance guidelines until October, so states are still figuring out how the changes might affect their often-beleaguered systems. Most expect the impact will be dramatic, particularly states such as Colorado that have a lot of group foster homes.

For the first time, the Family First Act caps federal funding for group homes, also known as “congregate care.” Previously, there were no limits, Cooper said. The federal government won’t pay for a child to stay in a group home longer than two weeks, with some exceptions, such as teens who are pregnant or parenting.

But even in states that are moving in the direction envisioned by the federal law, officials are worried about certain aspects of it.

In New York, state officials are concerned that the limits on group homes will cost counties too much. Under the new caps, New York counties will have to chip in as much as 50 percent more for certain children, said Sheila Poole, acting commissioner for New York’s Office of Children and Family Services. That would be a significant hit for smaller counties with scant resources, she said.

In California, city, county and state officials and child welfare advocates worry the law will place a burden on extended family members who are raising grandchildren, nieces and nephews outside of foster care. That’s because “kinship caregivers” won’t be eligible for foster care payments under the new law.

This practice isn’t new, but it is likely to expand under Family First, said Sean Hughes, a California-based child welfare consultant and former Democratic congressional staffer who opposes parts of the law.

The new law, Hughes said, “closes the front door to a lot of safety nets that we’ve developed for kids in foster care.”

Child protective services investigates alleged abuse or neglect in as many as 37 percent of all children under 18 in the United States, according to a 2017 report in the American Journal of Public Health. African-American children are almost twice as likely as white children to have their well-being investigated by child protective services. (The report only looked at reports of child abuse and neglect, not placement in foster care.)

A March report by the U.S. Department of Health and Human Services found the foster care population increased by more than 10 percent between 2012 and 2016, the last year for which data is available. The agency linked the increase in child welfare caseloads to the nation’s opioid epidemic, which is ravaging families.

In six states — Alaska, Georgia, Minnesota, Indiana, Montana and New Hampshire — the foster care population increased by more than half.

To help reverse the trend, the new law places a greater emphasis on prevention.

The federal government underfunded prevention services for years, said Karen Howard, vice president of early childhood policy for First Focus, a Washington, D.C.-based child advocacy group that worked on the legislation. Before the enactment of Family First, states got reimbursed for foster care through funding provided by Title IV-E of the Social Security Act — and that money could be used only for foster care, adoption or family reunification. The money could not routinely be used for prevention that might keep families from sending their children to foster care in the first place.

Now, for the first time, evidence-based prevention services will be funded as an entitlement, like Medicaid.

That means that prevention services will be guaranteed by the federal government for the families of children who are deemed “foster care candidates”: usually kids determined to be victims of abuse or neglect who haven’t been removed from their home.

Under the new law, states may use matching federal funding to provide at-risk families with up to 12 months of mental health services, substance abuse treatment and in-home parenting training to families. Eligible beneficiaries are the families of children identified as safe staying at home; teen parents in foster care; and other parents who need preventive help so their kids don’t end up in the system. States must also come up with a plan to keep the child safe while remaining with parents.

The law provides competitive grants for states to recruit foster families; establishes licensing requirements for foster families who are related to the child; and requires states to come up with a plan to prevent children dying from abuse and neglect.

In another first, the law also removes the requirement that states only use prevention services for extremely poor families. Because the income standards hadn’t been adjusted in 20 years, fewer and fewer families qualified for the services, advocates say. Now, states don’t have to prove that an at-risk family meets those circa 1996 income standards.

Under the new law, the federal government will cap the amount of time a child can spend in group homes. It will do so by reimbursing states for only two weeks of a child’s stay in congregate care — with some exceptions, such as for children in residential treatment programs offering round-the-clock nursing care.

The new restrictions begin in 2019. States can ask for a two-year delay to implement the group home provisions of the law, but if they do, they can’t get any federal funding for preventive services.

The group home provision comes after the U.S. Department of Health and Human Services issued a 2015 report showing that 40 percent of teens in foster care group homes had no clinical reason, such as a mental health diagnosis, for being there rather than in a family setting. Child welfare experts saw this as more evidence that group homes were being overused. Children’s average stay in a group home is eight months, the report found.

Some states rely more on group homes than others, with the amount of children in congregate care ranging from 4 to 35 percent of foster care children, according to a 2015 report by the Casey Foundation. Colorado, Rhode Island, West Virginia and Wyoming have the greatest percentage of children living in group homes, though the report also found that over the previous 10 years, the group home population had decreased by about a third.

Those who oppose the group home restrictions say they are too narrow in scope.

The law’s additional requirements for congregate care “reduce a state’s flexibility to determine the most appropriate placement for a child and would negatively impact the likelihood of receiving sufficient federal funding,” said Poole, the acting child welfare commissioner in New York. She said the state is weighing whether it will ask for a two-year delay.

It makes sense to not place foster youth in group homes unless absolutely necessary, said Hughes, the California consultant. But sometimes it is necessary. The vast majority of foster youth in group homes are there because staying in a foster home or with a relative didn’t work out, Hughes said. For kids who’ve been through trauma, particularly older kids, a traditional foster home isn’t equipped to give them the care they need, he said.

“The idea that kids are placed in group homes because the system is lazy and doesn’t have any regard for their well-being is unfounded,” Hughes said.