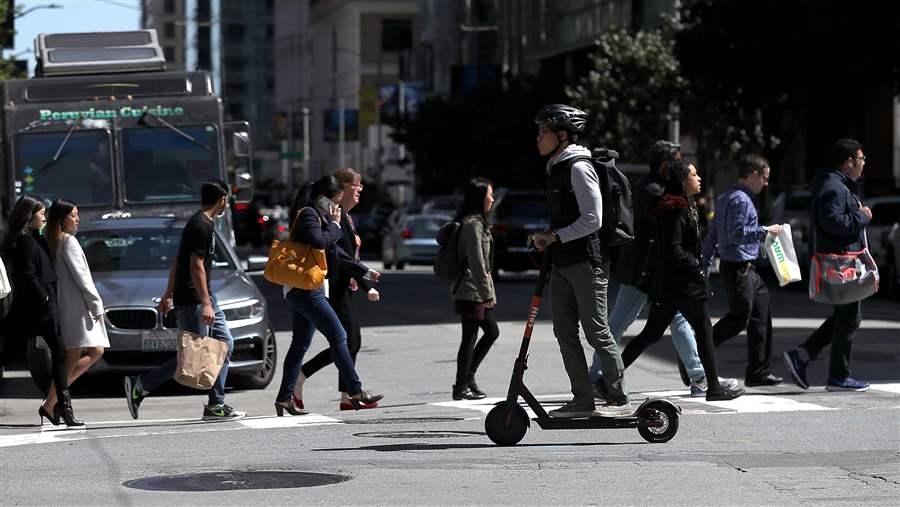 A scooter rider in San Francisco. The city’s attorney sent cease-and-desist letters to scooter companies. Other cities, in the South, have been more welcoming to scooters, which scooter advocates say can be more comfortable than riding bikes.

Editor's note: An earlier version of this story incorrectly attributed a quote from a LimeBike representative. It was Mary Caroline Pruitt who gave the quote, not Jack Song.

Their launch followed a familiar pattern. Electric scooters have followed a wave of dockless bikes, popping up seemingly overnight, to the delight of some residents and officials and to the dismay of others.

No, these aren’t Vespas. Instead, they more resemble the souped-up Razor scooters that are favored by schoolkids. Electric scooters’ small motors have been humming around cities up and down the East and West coasts, drawing the ire of some city officials who said scooter companies sidestepped government by going ahead before regulations could be written.

“It would be very nice if the tech bros could come in and ask in a collaborative fashion for permission rather than after-the-fact forgiveness,” said a San Francisco supervisor, Aaron Peskin, at a meeting in which the city was considering scooter regulations. The same day as the meeting, the city attorney sent a cease-and-desist letter to three scooter companies that had started in the area.

But the reception to scooters has been much warmer in the South, where some mid-sized cities are in talks to bring them in.

Bike sharing has arrived more slowly in the South for the same reason many smaller places have struggled to replicate the flourishing bike-share programs seen in major metropolises: Sprawling cities with less-developed pedestrian infrastructure and a less-dense downtown core are a tough sell for bike-share programs.

Yet as private, dockless bike-share companies spread further inland from the coasts and bring their product to mid-tier cities, many towns in the South are poised to become early adopters of electric scooters.

“I work in some of the most obese, hot, behind the cultural shift, and behind the bike culture shift, communities,” said Lindsey Gray West, who helped start the Birmingham, Alabama, bike-share program and now runs Bantam Strategy Group, a bike-share consulting firm in Baton Rouge, Louisiana, that works almost exclusively with Southern cities.

But scooters have been an easy sell, she said. “Just in the last two weeks probably I’ve had multiple city councilmen, multiple mayors over the age of 70, all at least 50 and older, that have come back and said, ‘This is the best thing I’ve ever done.’”

Gray West said scooters are a good fit for the South much for the same reason she advocated to have electric-assist bikes in Birmingham: It’s hot, it’s hilly, and people don’t want to show up for business meetings drenched in sweat.

The industry has been growing rapidly. Ride-hailing company Uber recently bought bike-share company Jump for an estimated $100 million. And scooters, which first hit the streets in late 2017, have reached more cities this year as the temperature climbs, with the devices rolling out in a new town every few weeks.

Already, scooters have arrived in sweltering Miami, and Mobile, Alabama, has committed to bringing in dockless bikes and scooters. LimeBike is planning to come to New Orleans, a city official there confirmed. And talks are underway in New Orleans, Huntsville and Birmingham in Alabama, as well as Long Beach and Gulfport, Mississippi, and Louisiana State University in Baton Rouge. Bird and LimeBike had just launched in Austin, but both companies pulled their scooters off the streets this weekend after the city passed an emergency ordinance Friday.

Dennis Madsen, a long-range planner in Huntsville, said the electric scooter could be a great help in connecting the two vital points of the city: its downtown and a tech campus filled with aerospace companies, two job centers that are about 6 miles apart. The temperate climate means bikes and scooters can be used year-round, though in the summer there may be a preference for scooters.

“Being able to quickly and comfortably cover a lot of ground is great, especially if you can do so without looking like you’ve gone through the ringer,” Madsen said. “It’s not even a concern of wanting to look good — you just don’t want to look like you came out of the tub.”

Unlike cities such as Washington, D.C., and San Francisco, these towns aren’t turning to scooters to solve a congestion problem but rather to draw people in and revitalize their downtown.

“I think something like the scooter is going to contribute to the vibrancy and the kind of pedestrian feel of the city,” said Birmingham city councilor Darrell O’Quinn, who has been pushing for scooters.

“I think it’s something that is a low-cost attraction that mid-sized cities can bring in that is something that’s fun,” O’Quinn said. “It generates some interest in the community while also being a real benefit to people in terms of increasing their mobility. In the South in particular, it makes sense because when it’s 98 degrees outside you want to make those trips as quick as possible.”

Scooter companies see their product as a cure to transportation woes in cities big and small.

“It’s going to appeal to anyone who looks at their calendar and says, ‘I need to get from Point A to Point B. It’s too far to walk or there’s a lot of traffic. How am I going to get there?’” said Kenneth Baer, a spokesman for an electric scooter company, Bird.

That’s not to say there aren’t some reservations about the little machines.

The scooters typically max out at 15 mph, and their reliance on batteries mean companies must bring them in every night for charging, which city leaders say helps keep the scooters from becoming too scattered or being a nuisance.

O’Quinn said the slow speeds makes them comparable to a bike and a fine fit downtown, where the speed limit is 25 mph.

But in South Bend, Indiana, which also is considering scooters, planning director Tim Corcoran said officials still are trying to work out the safest place for people to ride.

“A person in a car understands a person on a bike but not necessarily a person riding a scooter in the street,” he said. “We’re thinking about where we would allow scooters to be used, whether we’re comfortable with people using them on a sidewalk or not. Likewise, are we comfortable with them on the street? Both are interesting to think about, and there are plusses and minuses to each.”

Offering a less strenuous option could help bring mobility to people who may be unlikely to ride a bike due to age or physical condition. Although scooters don’t offer many of the same health benefits as bikes, some observers hope that riding them will lead to more active lifestyles.

“I think scooters are a gateway drug to walking and decreasing the stunning rates of obesity in this country,” said Paul Mackie with Mobility Lab, a transportation think tank.

Alabama, Mississippi and Louisiana, three states with cities considering the scooters, are among the most obese states in the country, according to the U.S. Centers for Disease Control and Prevention.

Companies that offer both bikes and scooters, however, hope cities will allow both.

"I have friends in D.C. who are professionals and don’t want to get sweaty on the way to work. Our scooters have been great in that case," said Mary Caroline Pruitt, a spokeswoman for LimeBike. The bike-share company, based near San Francisco, has been in talks with cities in the South. It introduced scooters in D.C. in March after having its bikes in the city for nearly a year. “People who want to be healthy and get a workout may want to bike."