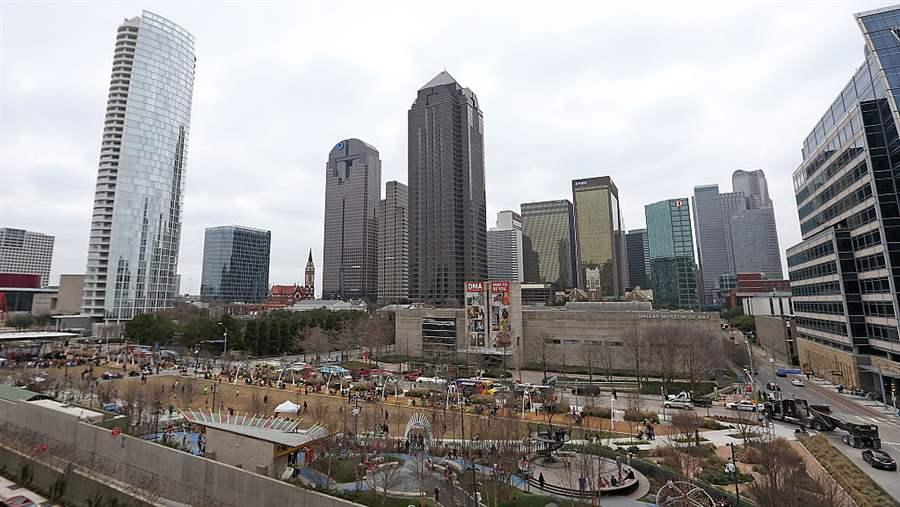 Dallas’ Klyde Warren Park houses community events, such as this Jeff Gordon day in 2015. First-time visitors might not realize at first that the park was built on a deck constructed across a freeway, part of a trend of cities nationwide building “highway cap parks” to bring more green space to downtowns.

The most popular place to put a city park is, increasingly, on a highway.

Cities looking to boost their downtowns, or to improve downtrodden neighborhoods, are creating “highway cap parks” on decks constructed over freeways that cut through the urban center. Pittsburgh, Philadelphia, Denver and Dallas have deck parks underway. Atlanta, Houston, Minneapolis and Santa Monica, California, are among the cities considering similar projects.

In crowded cities, highway deck parks are a way to create new acreage and provide green space that can spur downtown development. Capping a highway to create a park also can reconnect urban neighborhoods sliced apart by the expressway building boom of the 1960s and ’70s.

“There’s been a sort of a sea change in the way people think about roads and real estate in general,” said Ed McMahon, a senior fellow at the Urban Land Institute, a Washington, D.C., nonprofit that focuses on land use. “If you design a city around cars, you’re going to get more cars. If you design a city around people, you’re going to get more people and places and better real estate value.”

Dallas broke ground in February on the highway project that will undergird its second deck park, to be built over Interstate 35 in the Oak Cliff neighborhood. In 2012, the city opened the 5-acre, $110 million Klyde Warren Park above a freeway that separates the downtown Dallas Arts District from the Uptown residential and retail neighborhood.

“Everyone knows the future of cities is a good quality of life and attracting folks and telling them you don’t have to live in a concrete jungle,” said Bobby Abtahi, president of the Dallas Park and Recreation Board. 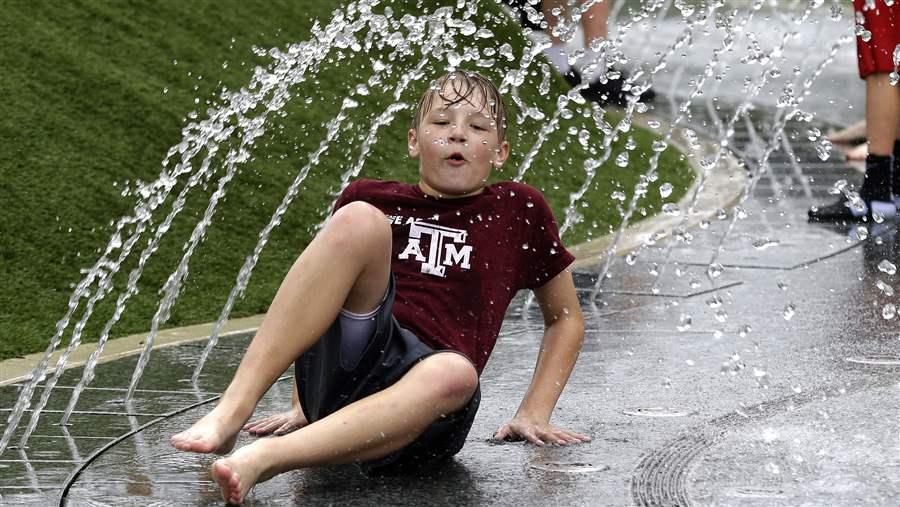 A boy plays in a water fountain in 2013 at Klyde Warren Park in Dallas, which is among the cities building “highway cap parks” to create downtown green space.

Dallas began building deck parks when local officials realized that its paucity of green space was hurting the city’s competitiveness with businesses, Abtahi said. Klyde Warren Park, now run by a foundation, includes a performance space, a children’s park, a restaurant and a dog run.

Property values around the park have shot up, bringing higher property tax revenue for the city. Office rents in nearby towers have risen by a third since the park opened. New development brought 7,000 more workers to downtown and 1,500 new apartments.

Klyde Warren Park, which draws a million visitors a year, “has kind of turned into our public square,” Abtahi said. “It’s really turned into a place where you see anyone and everyone.”

But skeptics argue that highways topped by parks are still highways, and that cities would be better off investing in mass transit.

Some deck parks have been around for decades: Seattle opened Freeway Park over I-5 in 1976 and Phoenix has had a park over I-10 since 1990. The current surge is being spurred by strong demand for development in the urban core, where there’s not much space for new parks.

“If you had plenty of other well-located urban land, you don’t need to spend hundreds of millions of dollars to make this location better,” said Jennifer Ball, vice president for planning and economic development of Central Atlanta Progress, a business coalition. “This urban land is at a premium now.”

To respond to the demand, Central Atlanta Progress has designed and is studying the feasibility of the Stitch, a $300 million proposed project to cover portions of the I-75/I-85 “connector” that creates a 14-lane gash through Atlanta’s downtown. The Stitch would include parks, a rebuilt transit station, and land for new development.

“It really is an economic development strategy,” Ball said. “It has a park, but if you dig closely into all the pretty renderings, we also see it as real estate development projects and the development of air rights. You’re creating land.”

Deck parks are expensive: Chicago’s Millennium Park, built over railroad tracks, cost $490 million and opened in 2004, four years after the millennium it was intended to celebrate. The Rose Fitzgerald Kennedy Greenway, created during Boston’s “Big Dig” to bury its Central Artery, cost $40 million, a fraction of the entire project’s $15 billion price tag but still a sizeable investment. Almost half of the $110 million cost of building Klyde Warren Park came from corporate and private donors. 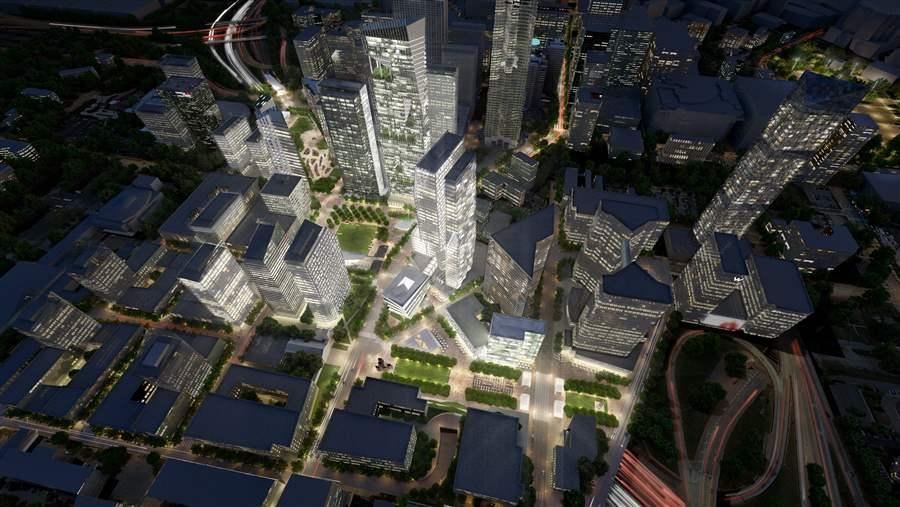 The Stitch is a $300 million proposed project that would cover portions of the Interstate 75/ Interstate 85 connector that currently creates a 14-lane gash through Atlanta’s downtown. This artist’s rendering illustrates how the proposed project would include parks, a rebuilt transit station and land for new development winding through downtown. The highways can be seen emerging from tunnels on either end.

The urgent need to repair or upgrade many half-century-old urban expressways also is fueling the construction of so-called cap parks. Highway reconstruction projects offer an opportunity — and possibly funding — for freeway caps.

In Denver, a $1.3 billion highway project will tear down an elevated portion of I-70 that runs through a low-income neighborhood, sink the rebuilt roadway and build a 5-acre deck park on top. (The project is being challenged in court on environmental grounds.) In Dallas, the Oak Cliff park deck will be built as part of a $666 million highway reconstruction project that will widen I-35 from eight lanes to 10.

The Oak Cliff park will reconnect a residential neighborhood divided by the highway’s construction in the ’50s. Oak Cliff residents objected to the current planned highway widening and proposed a cap park to offset the impact.

“The sentiment was, ‘Why should North Dallas and Klyde Warren get all the nice things?”’ Abtahi said. “That was never a discussion that was had before this highway was built.”

Highways built during the interstate highway boom are nearing the end of their useful life, so some kind of reconstruction is inevitable, said Michael Morris, director of transportation for the North Central Texas Council of Governments. The council is funding the bulk of the nearly $40 million cost for the Oak Cliff park.

“If you’re going to do it, you might as well have adult conversations with the people along the corridor about what’s in the best interests of their communities,” he said. For one thing, unhappy residents can drastically slow down the approval process for a highway project. “If you want to be in the freeway business in urban regions, you’ve got to be in the context-sensitive design business or you’re going to be there for a long time.”

Similarly, in Pittsburgh, a $26 million cap park over I-579 will rejoin the Hill District, a primarily African-American part of the city that was cut off by the highway construction, to downtown.

And in Minnesota, the state transportation department is considering three expressway lids as part of a two-year planning project for overhauling I-94, one of the city’s main arteries. One of the decks would reconnect Rondo, an African-American neighborhood in St. Paul split in two by the highway. The destruction of that neighborhood was so great — 900 homes and businesses were demolished — that in 2015 the state transportation commissioner Charles Zelle and Mayor Chris Coleman formally apologized to residents.

The Obama administration also gave deck parks a push, offering a $19 million grant for the Pittsburgh park. Then-Secretary of Transportation Anthony Foxx in 2016 said that urban highways had exacerbated economic inequality by devastating African-American neighborhoods for the benefit of suburban drivers.

“We have entire areas in this country where the infrastructure that is supposed to connect people is constraining them,” Foxx said in a speech at the Center for American Progress, a progressive think tank. “Achieving a middle-class life is made harder because of past transportation decisions.” He urged transportation planners to work on “connecting people to opportunity.”

Morris, the Texas transportation engineer, said Foxx “correctly reminded people … you have a responsibility to be sensitive to these issues.” The Oak Cliff park “speaks very directly to this particular policy.”