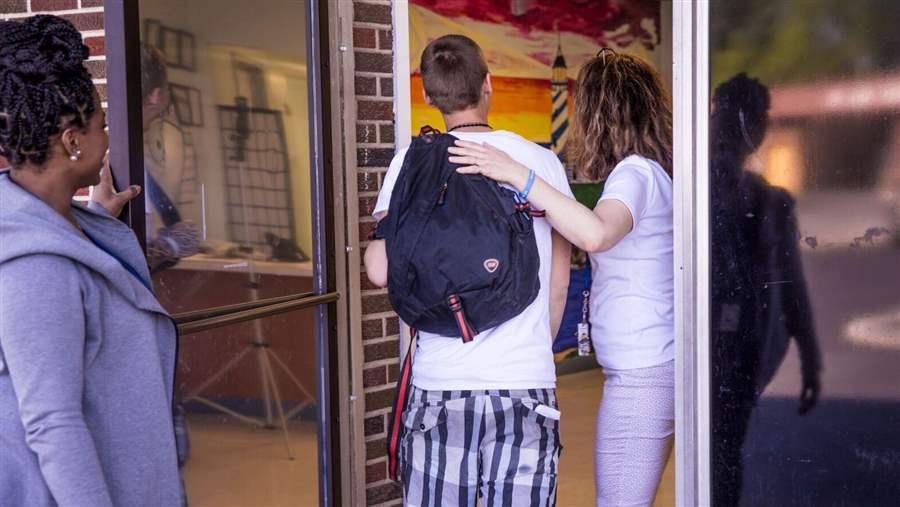 A young man enters the Connections Withdrawal Management Center in Harrington, Delaware. The center received a loan from the U.S. Department of Agriculture, which is prioritizing projects related to opioid addiction under two of its grant and loan programs.

For people addicted to opioids, the first time in detox isn’t necessarily the last. For Brian Taylor, the second time wasn’t the last, either — nor was the third, fourth or fifth.

The sixth time, though, was different. It has been nearly 17 months since Taylor, 33, walked out of his last treatment at the Withdrawal Management Center in Harrington, Delaware, and he hasn’t used drugs since. If the detox center hadn’t been so accessible — just 20 miles from where he was living, in the small town of Seaford — he said he may have lost his children, his family and even his life.

“I had a whole lot to lose,” he said in a recent interview with Stateline. “My back was against the wall.”

Like many rural areas in the United States, central and southern Delaware had no place for people to get withdrawal management services before the Harrington clinic opened in 2015. It quickly saw there was high demand. When the center looked for money to expand, it found an unexpected partner: the U.S. Department of Agriculture. Using a $1 million low-interest loan from the agency, the center is adding space for counseling, family therapy and primary care.

Six months after President Donald Trump declared the opioid epidemic a national emergency, some health officials say the federal government has not provided enough new money to combat it. But the U.S. Department of Agriculture this month announced it will offer help to some communities using the resources it already has.

The Harrington project, which came before the announcement, is an example of the type of work the USDA wants to support. A provision in the House version of the 2018 farm bill would allow the secretary of agriculture to declare a rural health emergency, allowing the agency to move more quickly than usual and requiring it to reserve money to address the problem.

Congress typically renews the farm bill, which sets agriculture and food policy, about every five years. It’s unclear whether the House version of this year’s bill will pass, and the Senate has yet to release its own version.

The USDA plans to be “a strong partner” in rural communities’ battle against addiction, Anne Hazlett, assistant to the secretary for rural development, told local health officials in a conference call earlier this month.

“This is more than just health care,” she said. “This is a matter of rural prosperity.”

The new focus comes as the rate of drug overdoses in rural areas, which surpassed the urban rate in 2006, continues to increase rapidly. The rural rate stands at about 17 per 100,000 residents, compared with the urban rate of 16.2 per 100,000, according to the most recent data from the Centers for Disease Control and Prevention.

Farmers are especially vulnerable. About 3 in 4 farmers and farmworkers have misused opioids or know someone who has, according to a 2017 study by the National Farmers Union and the American Farm Bureau Federation. Farming and ranching are among the most dangerous jobs in the country, and with the high risk of injury comes the potential for misusing prescription drugs.

Combating the opioid epidemic in rural areas using USDA grants and loans is an idea that was proposed last year by U.S. Rep Cheri Bustos, an Illinois Democrat, and U.S. Sen. Joe Donnelly, an Indiana Democrat. Their bill, the Addiction Recovery for Rural Communities Act, outlined a strategy similar to what the USDA has adopted.

“There’s no doubt that we need to do more to help provide accessible treatment options for men and women struggling with addiction in small towns and rural communities across the heartland,” Bustos said in a statement to Stateline.

It makes sense for the USDA to support rural health systems, since hospitals are often the economic backbone of rural communities, said Maggie Elehwany, government affairs and policy vice president for the National Rural Health Association, based in Kansas and Washington, D.C. “If you don’t have those, you don’t have a community.”

While Elehwany and other rural health advocates say the grants and loans will be helpful, they say it won’t solve the most dire health care challenges in rural areas, such as doctor shortages and low reimbursement rates.

Rural hospitals have money problems when their patients cannot afford to pay for services and reimbursement rates are low. Since 2010, 83 rural hospitals have closed, according to the Cecil G. Sheps Center for Health Services Research at the University of North Carolina at Chapel Hill. Elehwany wants the farm bill to directly support struggling rural hospitals.

Meanwhile, the shortages and the low reimbursement rates are putting a strain on community health centers, which are seeing an increase in demand for substance abuse disorder services, according to officials at the National Association of Community Health Centers.

Patients receiving treatment for opioid misuse and other substance abuse disorders at U.S. health centers more than tripled from 2010 to 2016, from about 98,000 to about 421,000, according to data collected by the National Association of Community Health Centers.

One-time grants are helpful, said Jennifer Taylor, a deputy director at the association, “but we are really thinking about this in a really long-term, sustainable way.”

A USDA grant that pays for telehealth technology would allow a clinic to start offering the service, Taylor said, but it wouldn’t provide the funding to keep the service going.

The Middle of the Night

Brian Taylor, who now works at the detox center, said his addiction started with alcohol and marijuana, then Percocet, then heroin. From age 13 to 31, he was in and out of detention centers as he committed various crimes: assaults, robberies, shoplifting and probation violations. The motivation behind all those crimes, he said, was the need to get high.

“It was a hopeless desperation, you know?” he said. “I was desperate to get help, but I felt there was no help.”

In Delaware, overdose deaths are up more than 50 percent in a few years, from 229 in 2015 to 345 in 2017. The state has added new funding almost every year since 2014 for substance abuse or mental health, and has added residential treatment, sober living beds, outpatient treatment and recovery response centers. Democratic Gov. Jay Carney is requesting $1.3 million in new funding for the upcoming budget year for 20 additional sober living beds and emergency room consultations.

Making sure that services are available in areas of need will save lives, said Cathy McKay, CEO of Connections Community Support Programs, which runs the Harrington detox center under a state contract. The treatment center is open at all hours for a reason, McKay said.

“A lot of people, when they want treatment, it’s in the middle of the night,” McKay said. “A lot of times people think about that when they are in pain. If you don’t have a way to hop on that right away, a lot of times you lose them.”