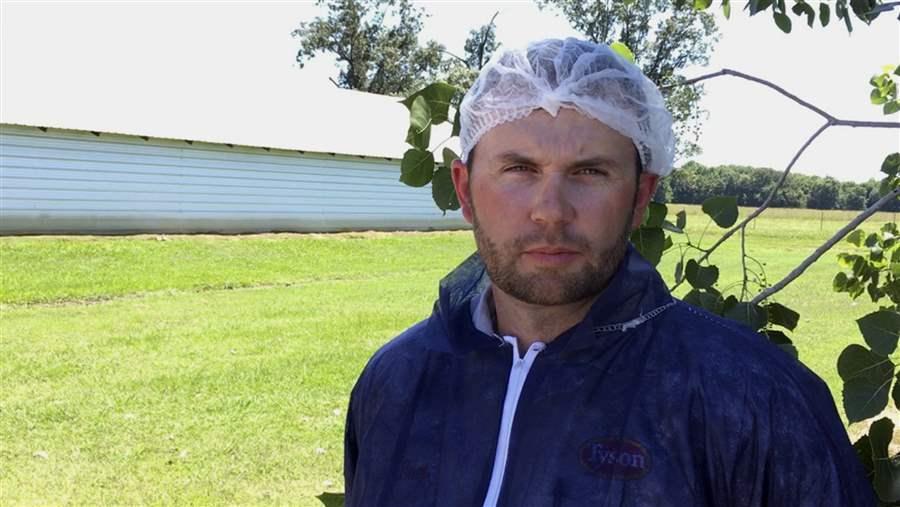 A Tyson Foods employee outside an Arkansas chicken house. Immigration scanning for new employees is especially common in states like Arkansas and Delaware where chicken processing is a big employer.

Amid the Trump administration’s vocal efforts to crack down on the hiring of undocumented immigrants, little attention has been paid to a federal program that, if used uniformly, could go a long way toward stopping the practice.

E-Verify — which is run by the U.S. Department of Homeland Security and matches job applicants and federal immigration data — has been touted as a solution to helping employers determine whether a potential hire is legally entitled to work in the United States. But Congress has spent years struggling to pass comprehensive immigration reform, and the E-Verify program remains voluntary across most of the country.

Although President Donald Trump included mandatory E-Verify use in his 2019 federal budget proposal, some traditionally Republican interest groups, such as agriculture, have concerns about mandating E-Verify without an overhaul to the U.S. guest-worker program.

Stateline conducted a state-by-state analysis of E-Verify use, looking at Homeland Security data and hiring statistics from the federal Quarterly Workforce Indicators, and found that a critical tool for preventing the illegal hiring of undocumented workers hasn’t been used uniformly even in the states that require it.

The deciding factor in how many employers use the federal E-Verify program might not be state law alone — but also whether a state’s leading industry is one that relies heavily on an immigrant workforce: namely, the poultry industry.

Stateline’s analysis illustrates a dictum that private industry often pushes: Give us the tools, and we’ll take care of the problem without burdensome regulations.

Four of the five states with the highest rates of E-Verify use are also among the nation’s top producers of broilers, the chickens raised, slaughtered and packaged before being shelved in grocery stores across the country.

Poultry plant workers are concentrated in Georgia and Arkansas, the top two states for E-Verify use, with a combined 60,000 employees, according to federal statistics.

E-Verify use is most widespread in Georgia, with 94 percent of hires screened between July 2016 and June 2017, according to Stateline’s analysis. Georgia’s law isn’t the strictest, but it does require all government agencies and most private employers to use E-Verify.

Poultry also is Georgia’s top agricultural commodity, with 1.4 billion broilers produced in 2016, according to the U.S. Department of Agriculture.

Alabama, another state requiring E-Verify use, had a 60 percent screening rate and produced 1.1 billion broilers in 2016.

Perhaps most interesting is Arkansas, which has achieved the second-highest E-Verify rate without legislation, at 66 percent.

Arkansas, home to Tyson Foods, produced a billion broilers in 2016.

Delaware, home to Perdue, had a 65 percent screening rate. Maryland, home of Holly Poultry, was at 55 percent. Neither state requires E-Verify.

In only nine states did employers screen half of new hires in the year that Stateline studied, July 2016 to July 2017. All but Arizona and Rhode Island have significant poultry industries. The others — Georgia, Arkansas, Delaware, Tennessee, Alabama, Maryland and South Carolina — are among the top bird-raising states in the country.

Tamar Jacoby, an E-Verify supporter and advocate for legal immigration who runs the group ImmigrationWorks USA, figures that major poultry producers have vivid memories of federal workplace raids a decade ago that resulted in legal fees and many of their workers being detained.

“The meat and poultry industry started earliest and has gone the furthest down that road of seeing the value and the benefit of E-Verify,” Jacoby said.

Tyson Foods — after being charged with smuggling unauthorized immigrants from Mexico and cleared by a jury in 2003 — is now a member of a federal immigration enforcement program that requires an audit of immigration documents for all current workers as well as use of E-Verify for new hires.

Poultry processors may have more influence on smaller states like Arkansas and Delaware than larger states like Texas, said Matt Spencer, director of human resources for the American Poultry Association, a trade group. Industry giants like Tyson and Perdue have plants in many states and adopt the same E-Verify policy in all of them, regardless of local laws and politics, he said.  Some members don’t use E-Verify, and the association does not take a position on it.

Tyson has locations in many states and uses both E-Verify and a federal service to verify Social Security numbers, said Caroline Ahn, a company spokeswoman.

Georgia has had unparalleled success in getting employers to use E-Verify by requiring it for a business license.

In California, where 23 percent of new hires are screened, E-Verify is discouraged, and local ordinances mandating its use are prohibited.

Some of the states with high screening rates are red states with strong anti-immigrant sentiment. Not Texas and Florida, where employers screen fewer than a third of new hires — fewer than blue states Minnesota and Washington.

Jason Fry, a senior director at Equifax, which handles about 4 million E-Verify screens a year for clients, said laws can be more important than politics, even in states that are politically hostile to unauthorized immigration.

“Businesses in general will follow requirements — they’ll do what they have to do,” Fry said. “It’s not so much about the local politics.”

In states that don’t mandate E-Verify screening, employers hiring workers with falsified paperwork can still comply with federal law, which says only that they cannot knowingly hire unauthorized workers.

Nor can E-Verify be used to screen existing employees — only new hires.

Stateline’s analysis, showing such an uneven use of E-Verify, “creates a case for a uniform, 50-state solution,” said Jennifer Pett, spokeswoman for U.S. Rep. Lamar Smith, a member of the Judiciary and Homeland Security committees. Smith, a Texas Republican, has sponsored a bill in multiple Congresses that would require universal E-Verify use.

Smith’s bill creating a national E-Verify mandate was passed by the Judiciary Committee in October and folded into an immigration package sponsored by Republican U.S. Rep. Bob Goodlatte of Virginia, Smith’s office said. Some E-Verify proponents have been disappointed to see it languish since then.

Companies are mixed on E-Verify. Although the service is free, it costs businesses money through administrative time or hiring independent contractors such as Equifax. The U.S. Chamber of Commerce, long an opponent of E-Verify, switched gears in 2015, testifying to Congress in support of the program.

“The bigger restaurant chains got religion on this, to the point they’re now upset that the smaller ones are not doing it,” Jacoby said. “They see it’s better to have a national mandate than 50 different state laws.”

Dallas Fed researchers determined in 2017 that state-based E-Verify mandates either reduced or slowed the growth of the population of unauthorized immigrants in Alabama, Arizona, Mississippi and Utah.

No significant change was observed in Georgia, North Carolina and South Carolina. (Support for the study was provided by The Pew Charitable Trusts, which also funds Stateline.)

Not all right-of-center organizations support E-Verify. Alex Nowrasteh, an immigration policy analyst at the libertarian Cato Institute in Washington, D.C., argues that nobody should have to ask the government for permission to work.

And pro-immigration activists say they oppose a national E-Verify mandate unless it includes help for the unauthorized workers who are already here.