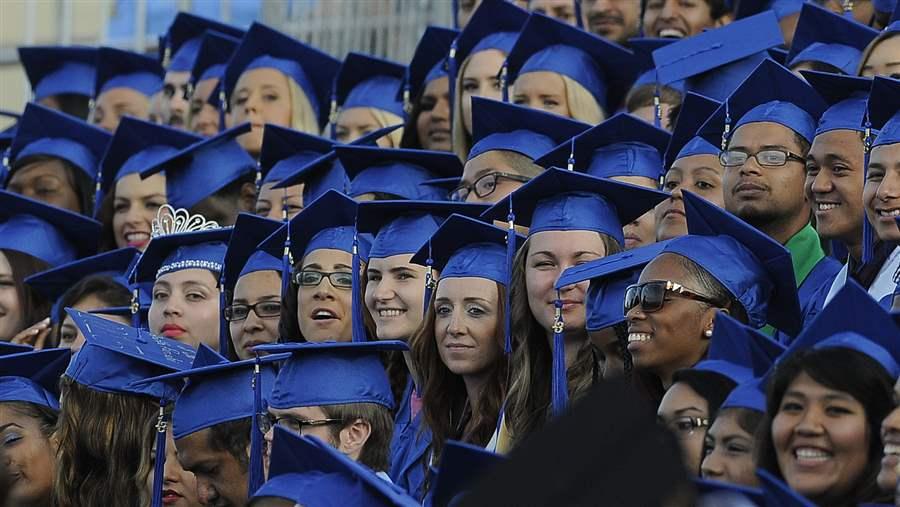 Graduates of Santa Monica College. Santa Monica is one of a handful of California two-year colleges piloting four-year degree programs as part of a trend toward community colleges conferring some bachelor’s degrees.

Editor's note: This story was updated to correct the description of the community college plan in Ohio Gov. John Kasich’s 2018 budget.

Starting in fall 2019, students at Ohio’s Sinclair Community College will be able to enroll in a four-year degree program in unmanned aerial systems, also known as drones.

They’ll learn mission planning, maintenance, laws, data analytics and more. Working on drones is a new field, and the college is eager to expand its program to meet the growing demand for graduates.

Just up the road, Youngstown State University offers a somewhat similar four-year degree, in mechanical engineering technology — but tuition there is double Sinclair’s.

Sinclair is one of a growing number of community colleges that have embraced the practice of two-year schools conferring four-year degrees. As college costs rise and state officials look to accommodate nontraditional and low-income students, more are turning to community colleges to develop programs for industries with a lot of need — sometimes irking officials at four-year universities in the process.

About 90 two-year colleges are offering about 900 baccalaureate programs across the country, according to Beth Hagan, executive director of the Community College Baccalaureate Association, a Florida-based trade association.

But officials at four-year universities are balking at what they see as community colleges encroaching on their turf, and competing for scarce resources from the state. Many officials would rather partner with the two-year schools than compete with them.

Ohio is one of 19 states that allow at least one two-year college to offer a four-year degree, and a half-dozen states could be moving in the same direction. Most community colleges in those states can offer only baccalaureate programs that are narrowly tailored, rather than offering many programs across a wide swath of disciplines. The community colleges still offer associate degrees and other certificates to students who want to complete their studies in two years, but those who want a bachelor’s degree stay for four. 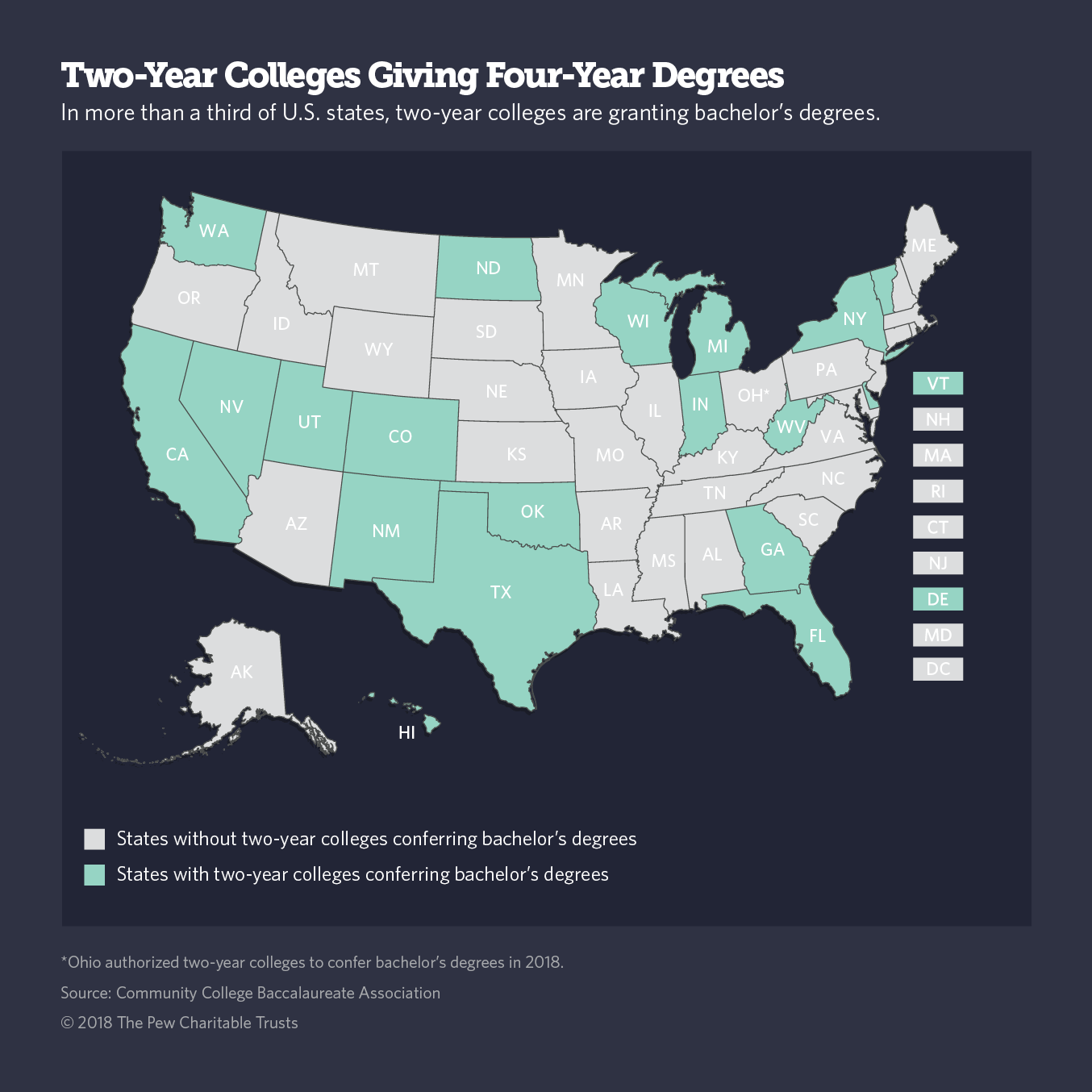 “These are very much niche degrees when there is a local workforce need,” Hagan said, “either for skills that need specific training and require a bachelor’s degree, or for someone who has those skills and wants to advance into a supervisory level.”

“These are people who can’t leave their families, or their jobs … to go away to university and get a degree,” she said. “Some are younger students who live with their families in a culture that’s not conducive to going away.”

Despite limits on what they can offer, some two-year schools are offering baccalaureate programs that officials at four-year schools see as competition. Their programs are commonly found at four-year colleges and universities, ranging from nursing and education to information technology and human resources management.

In California, 15 community colleges offer bachelor’s degrees in health and technology subjects such as biomanufacturing and health information management. In Georgia, students at two-year schools can get their bachelor’s in nonprofit management and respiratory therapy.

One California student, Elvia Esquer, is a mother of two college-age children who has worked as a medical coder for 22 years near her home in San Diego. She is going to a community college, San Diego Mesa College, to get her bachelor’s in health information management. She hopes the new degree, which she is set to receive in May, will help her move into a management position.

One of Esquer’s children also attends San Diego Mesa, and the other goes to a different community college. Her husband is a bus driver, and she said cost was the most important factor in her choosing San Diego Mesa over the closest four-year school, Loma Linda University.

“This is a big deal for our family,” she said. “I’ve been encouraging my kids to go to school, and I was encouraged by my father, who passed away. Education is the key to success. That’s why it’s a big deal.”

She said she will have spent about $2,000 a year to go to the community college. Tuition and fees at Loma Linda cost more than $33,000 a year, according to College Factual, a website that tracks college costs.

Tuition at San Diego Mesa was also a factor for Linda Bredeson — but so was the commute. Bredeson, 34, works at a hospital about a 20-minute drive from her home in San Diego. School is 10 minutes from work. Getting to Loma Linda, she said, would take 90 minutes.

“It’s a hop and a skip away, which makes going to school very easy,” Bredeson said, adding that she has gained confidence simply by attending the classes, and got a promotion in January.

In Ohio, Republican Gov. John Kasich’s fiscal 2018 budget has cleared the way for two-year colleges to offer four-year degrees. The governor has long advocated conferring four-year degrees at community colleges as a low-cost pathway to a higher degree.

“Community colleges are doing this to serve the students-and-employers community we serve now,” said Adam Murka, chief of staff for Sinclair Community College in Dayton. “We are not trying to be universities.”

Murka pointed out that the Ohio Department of Higher Education had to approve the school’s application to confer four-year degrees, and that one requirement was that the degree was not already available at other institutions in the state. The drone degree fits that description, he said.

The Youngstown State degree, by comparison, is broader. “The bottom line is there is nowhere else in Ohio where you can get this degree,” Murka said. “This is an area of local economic importance. It’s an area of tremendous growth over the coming decades.”

But representatives of universities say there’s more to a traditional four-year college education than a diploma, and they don’t welcome the competition.

“We live in a state with limited resources for higher education,” Youngstown State’s provost, Martin Abraham, said. “We’re continuously cutting back — not increasing funding — for higher ed. It doesn’t make a lot of sense to set up a competing system for the same set of funds.”

While the Sinclair program may not compete directly with Youngstown State, Abraham said the four-year school has a mechanical engineering technology degree that provides similar training. Purdue University, in nearby Indiana, also has a degree in drones.

Average in-state tuition at a four-year public college in Ohio was close to $7,000 for the 2016-17 school year, according to CollegeCalc, a website that compares college costs using Department of Education data. Sinclair averaged just above $3,000, while Youngstown State came in close to $8,000.

“There’s a reason the tuition structure is different at a four-year university versus a two-year university,” Abraham said. For example, he said, Youngstown State’s career fair attracts 70 companies to campus every year.

“That’s economy of scale. It drives up the cost of our education, but it also provides significant value to our students that is not easily replicated on a community college campus offering one or two baccalaureate degrees.”

And C. Todd Jones, president and general counsel of the Association of Independent Colleges and Universities of Ohio, said the argument that baccalaureate degrees are unaffordable is a “red herring.”

"Financial assistance makes degrees affordable, particularly for low-income individuals in our state," he said. There's no reason in terms of costs for creating a community college baccalaureate degree, he said.

The debate played out in testimony this year to the Ohio Department of Higher Education. Representatives from the four-year schools succeeded in removing a passage from a new regulation that would have allowed two-year institutions to teach the same courses that are taught at four-year institutions, with the department’s permission.

For students, there are pros and cons to getting a bachelor's degree from a community college, according to the Community College Review, which follows issues related to two-year colleges. On the plus side, in addition to lower cost, students have the flexibility of studying closer to home and avoiding housing costs, while tailoring their course schedules to their work and home schedules. On the negative side, courses of study at community colleges are limited, and some schools have outdated equipment.

In California, legislators will decide this year whether to renew or extend a 2016 pilot program that offers a handful of bachelor’s degrees in subjects such as airframe manufacturing and respiratory care at community colleges.

Students have been enrolling in the degree programs, a 2017 report from California’s Legislative Analyst’s Office found, but there is not enough data such as graduation rates with which to evaluate the program.

Some state lawmakers would like to see the program expanded. Democratic state Sen. Jerry Hill, who authored the legislation to start the pilot program, said four-year institutions are often not within commuting distance of the students who would potentially enroll in these kinds of programs.

"Education should be convenient," he said. Or students "won’t participate and at the end of the day won’t be educated enough to meet the needs of the state and their need for a good-paying job."

Community colleges could help graduate more low-income and minority students. Forty percent of students at state community colleges, where low-income and underrepresented students are more likely to enroll, transfer to four-year colleges, according to a report by the nonpartisan Public Policy Institute of California. “The central challenge,” the report said, “is to improve pathways through college.”

Hill maintains his legislation will help to do that by bringing baccalaureate options to students where they are — in their communities. Other arguments, he said, amount to an academic "turf war and nothing else."