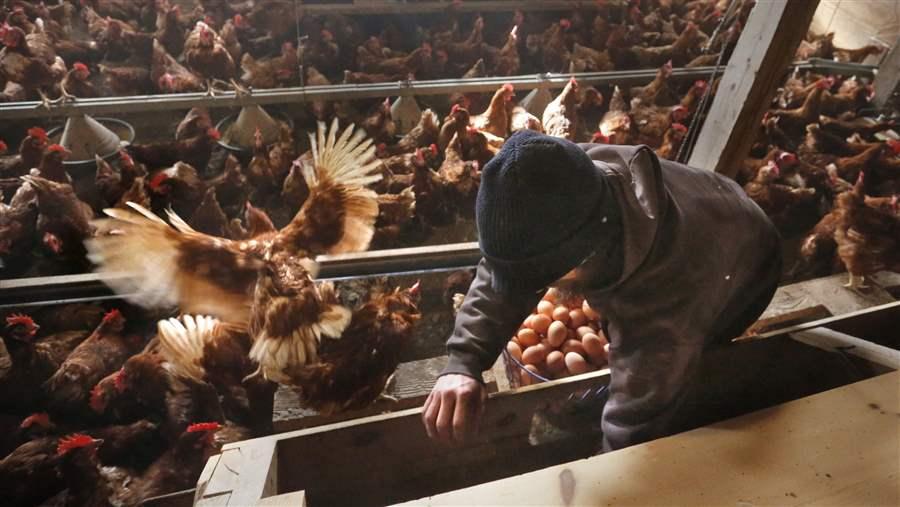 An employee gathers eggs at Bowden’s Egg Farm in Waldoboro, Maine. The farm used cages in the past but has switched to cage-free egg production. Legislators in several states are hoping to force egg producers to go cage-free. In Iowa, the No. 1 egg-producing state, the farmers are fighting back.

Dennis Bowden has raised chickens in the town of Waldoboro, Maine, nearly his whole life. For more than 40 years, he raised his chickens in cages. Then four years ago, when he turned 65, he cut down his flock and went cage-free.

The decision to switch was Bowden’s alone, but around the country many politicians have firmly taken sides on the issue of penning hens, hoping either to require egg producers to go cage-free or to protect conventional producers by mandating that stores stock their eggs.

Eggs are a staple of the American diet, with 88 billion table eggs produced in 2016. Egg consumption is growing, and the quality of life of the hens that lay the eggs has become an issue not just for animal welfare groups but also for many consumers. Although cage-free hens represent 16 percent of U.S. chickens, their share of the flock grew by a third from 2016 to 2017, and the egg industry and its supporters are paying close attention.

When California and Massachusetts enacted laws requiring that eggs produced and sold there be raised cage-free, 13 states including some of the nation’s largest egg producers sued, saying the laws violated the commerce clause of the U.S. Constitution.

Iowa, the top egg-producing state in the country, went further and enacted a law to protect its conventional, caged-chicken industry. The state now requires any grocer participating in the federal food program for low-income mothers, infants and children, known as WIC, to sell conventional eggs alongside cage-free options.

And last week, U.S. Rep. Steve King, an Iowa Republican, introduced an amendment to the farm bill that would block states from regulating agricultural products that are also produced in other states — a clear shot at cage-free-egg laws. 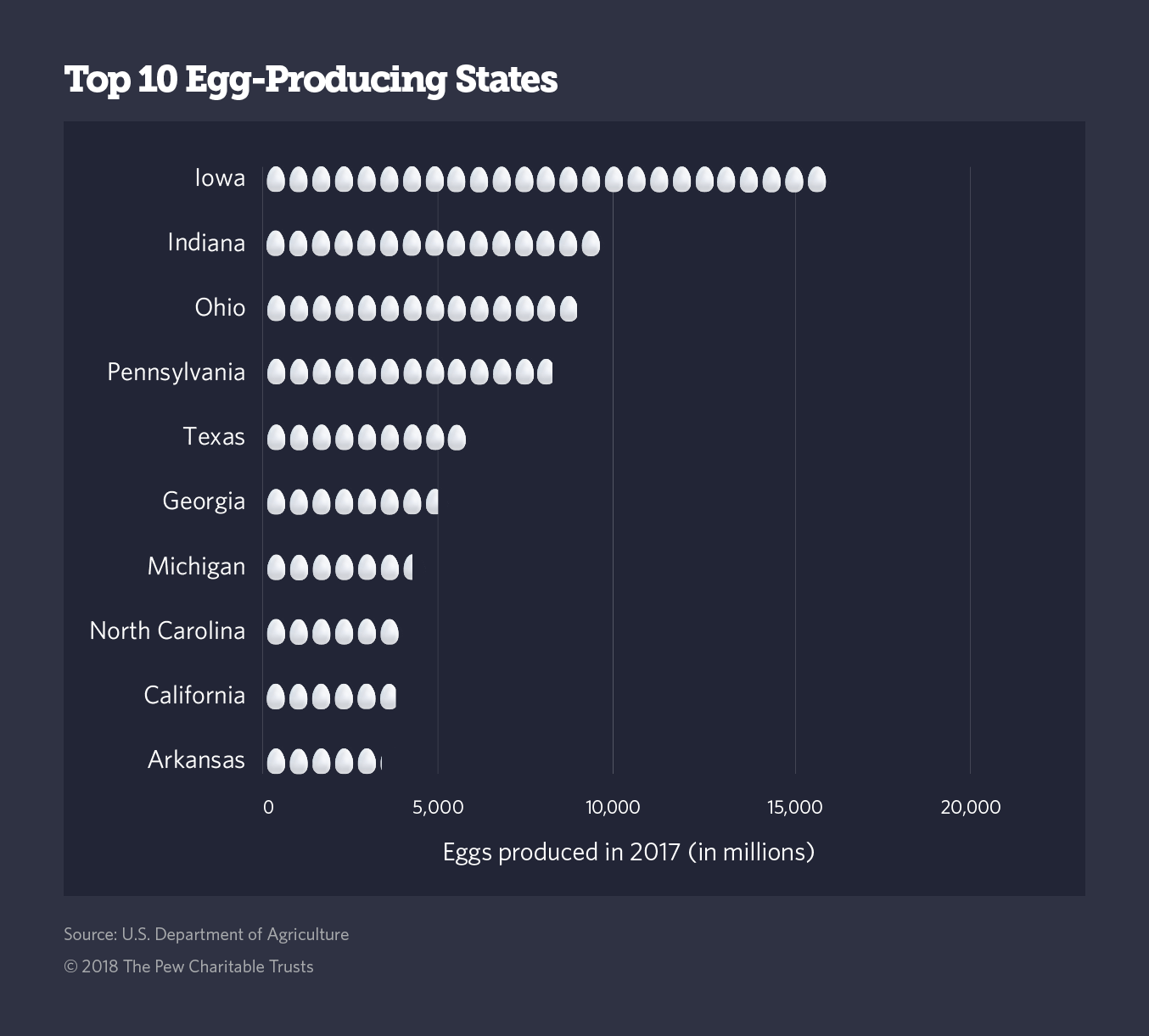 The tension comes as many restaurants and retailers say they are going cage-free — McDonald’s and Kellogg’s plan to do so by 2025, as does the grocery chain Kroger. And Ohio, Oregon and Washington have banned traditional cages, while this year, bills in Rhode Island and Michigan would require cage-free production and sales.

Conventional egg producers outside those states fear that as more egg-importing states enact such laws, they too will be required to go cage-free, costing them about $40 a bird to convert their facilities.

The Humane Society of the United States, which was behind the ballot measures approved in Massachusetts and California as well as the bill in Rhode Island, said that’s the goal.

"Some states are net importers; some are net exporters," said Josh Balk, vice president of farm animal protection with the organization. "What we hope to achieve is that there is no place for caged hens to be sold anywhere."

Cage-free doesn’t mean chickens frolicking through pastures. The most common scenario is a big barn with thousands of chickens able to fly and move about freely, even if they are packed in. They may stay inside their entire lives. It’s not chicken utopia, Balk said, but it does give them space to do things chickens like to do — spread their wings, flutter around in the dirt, or just perch.

But having that many chickens cooped up in one space can be dangerous too. Pecking order is not just an expression — the birds seek to create a hierarchy among those they share a space with by pecking those beneath them. Bowden said he trims the beaks of his birds, something he likens to clipping one’s fingernails, so that the birds don’t hurt each other.

Producers who use cages say birds each have about the space of an 8-by-10-inch piece of paper but can move around alongside six or seven other chicken cage-mates, according to a spokesman for the National Association of Egg Farmers, Ken Klippen. That keeps them from pecking each other as much and from pecking at their own feces.

Iowa's move to protect conventional egg producers was supported by the industry — Klippen said farmers in other states may consider pushing similar legislation. But the bill was narrowed considerably after grocers expressed concern, and lawmakers eventually limited the restrictions to grocers that serve the more than 60,000 WIC participants.

"We want the market to dictate and the consumers' choice to dictate what you put on the shelf," said Michelle Hurd, president of the Iowa Grocery Industry Association. "We were concerned it sets a precedent for industry to use the law to force stores to carry their type of product." Consumers, however, can present a conundrum.

Cage-free-egg laws appear to be popular with consumers — at least the ones who voted for them. Ballot measures were approved by wide margins in California, with 64 percent of the vote, and in Massachusetts, with 78 percent. This happened despite consumers in both states overwhelmingly buying conventional eggs.

"I call it a vote by paradox," said Jayson Lusk, an agricultural economist at Purdue University in Indiana who has studied the effects of the California law.

"These cage-free eggs were available in the grocery store, and, at the time, less than 10 percent of market share was cage-free. Why people banned something they were routinely buying in a grocery store, I don’t know," he said. "It does act something like an unfunded mandate. We have asked farmers to provide something that we as consumers have not funded by buying that product."

Only California’s law has been fully phased in — the laws typically give farmers a few years to convert from cages — so the impacts of its law have been the most widely studied.

Lusk estimated that the number of eggs produced in the state since the law was enacted was a third lower than it otherwise would have been. In response, stores in the state initially imported more eggs from other states. Shortly after the new law took effect, the price of eggs increased by more than a third, though by fall 2016, Lusk estimated that prices were 9 percent higher than they would have been without the law.

But some economists doubt the egg industry can produce enough cage-free eggs to meet future demand spurred by state mandates and retailer pledges. To do so, three-quarters of the nation’s 320 million birds would have to go cage-free.

At the same time, some egg producers have paused plans to expand cage-free production because their products weren't being grabbed off store shelves. 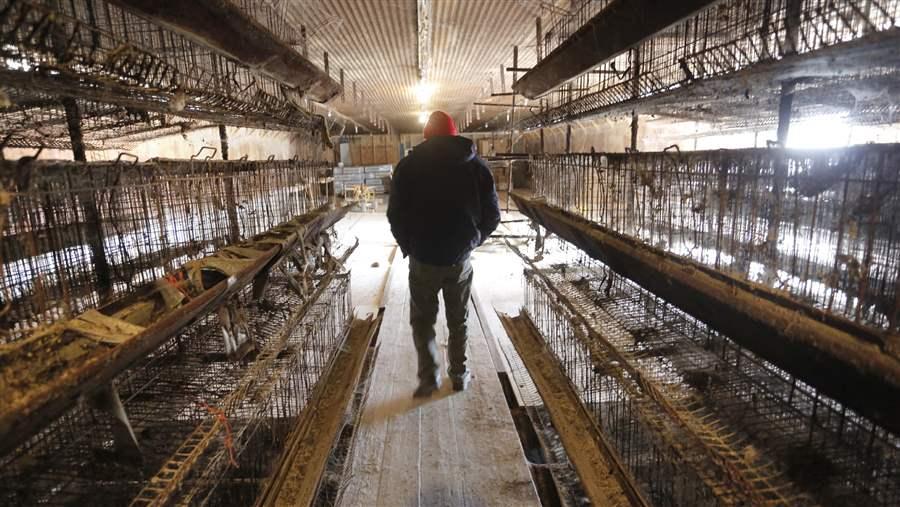 Dennis Bowden walks through the room that used to house 33,000 hens at his egg farm in Waldoboro, Maine.

Cage-free eggs aren’t just more expensive because farmers must convert their facilities. They require more work from farmers too.

When Bowden in Maine went cage-free, he went from a flock of more than 33,000 hens down to 3,000. But he had to increase his employees from five to eight just to help with the extra work taking care of the chickens.

“The majority of them like the nest box ’cause it’s darker and more private,” Bowden said. “They get in and like setting on their eggs. But some like making nests on the floor and others don’t give a damn and just lay eggs wherever they may be — on the window sill, all kinds of places like that.”

So now they have to collect eggs thrice a day instead of just once, and the shells get dirtier, so it takes more work to clean them.

Bowden didn’t go cage-free for the chickens’ sake. The family farm was cage-free and even sometimes had chickens in the pasture before they bought cages in 1969. When those were at the end of their useful life and Bowden was ready to slow operations down a bit, he converted the old barns by adding nest boxes he built himself.

But he does think his chickens are happier.

“It’s pretty hard to gauge,” he said. “We can’t really get them to vote.” But they are certainly making use of the space. They can move around, spread their wings — they have “free choice,” he said. And egg production per hen, which farmers say is perhaps the best indicator of chicken satisfaction, is the same. 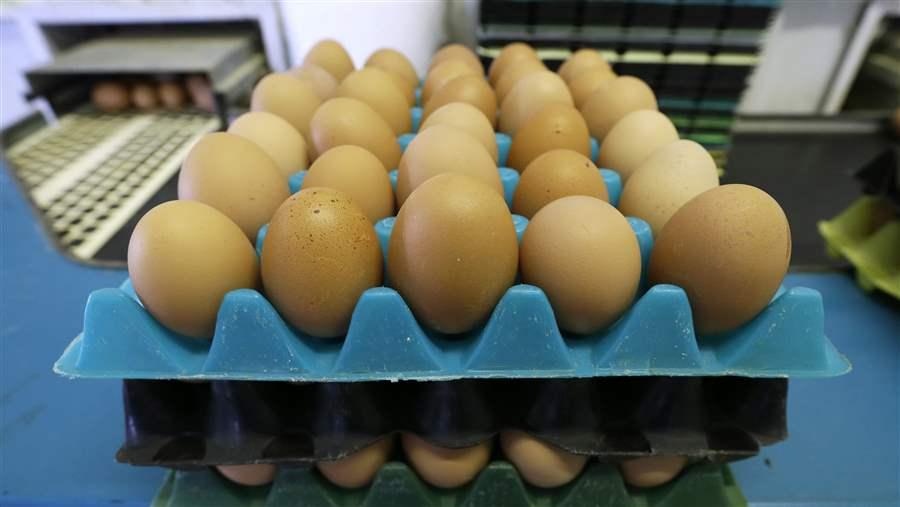 Cage-free eggs from a farm in Iowa.

Despite being happy with the switch, Bowden doesn’t think cage-free should be mandatory.

“I think it should be an issue of the person votes when they buy the eggs,” he said. “Does he want to pay $5 a dozen for eggs or $2 a dozen? Poor people can’t afford to buy eggs if they’re all cage-free.”

That’s what legislators in Iowa argued too.

“It’s not just about farmers versus animal rights,” said Iowa state Rep. Lee Hein, a Republican who chairs the Agriculture Committee. “It’s about people having access to affordable protein.”

Balk, with the Humane Society, said it’s insulting to imply that low-income people care less about animal welfare than the wealthy. He compared the group’s work to banning child labor, saying he was confident California’s and Massachusetts’ laws would withstand their court battles.

“No producer is mandated to sell in any state,” he said. “We’re just saying if you want to sell your products in Massachusetts, for example, you need to follow these minimum standards.”