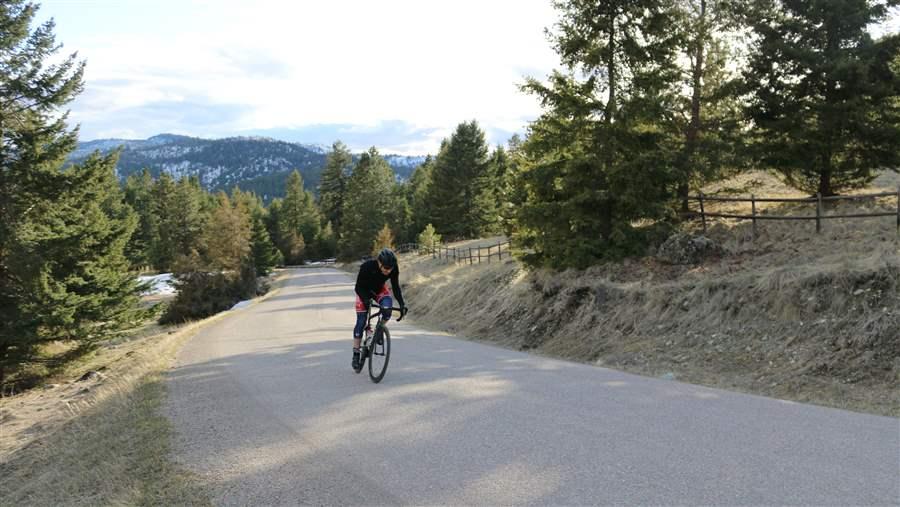 Dan McAllister climbs a hill in Lone Pine State Park in Montana. McAllister is one of many who have moved to Flathead County, Montana, recently to take advantage of year-round recreational opportunities.

FLATHEAD VALLEY, Mont. — It’s a Monday evening and Dan McAllister is charging up a mountain in Lone Pine State Park under a canopy of Douglas fir.

He keeps his head down and his bike tires whizzing until he gets to the top, where he can see across the Flathead Valley in northwest Montana. To the north are the snowcapped vistas of Glacier National Park and to the south is the glimmering head of Flathead Lake, one of the largest natural freshwater lakes west of the Mississippi.

McAllister, 33, moved here two years ago from Missouri so these could be his everyday views.

He’s not the only one. Every year, more people are moving to small towns tucked in the Flathead Valley so they can choose from a range of outdoor activities — camping, hiking, riding their bikes, even kayaking or skiing — throughout the year. Flathead County first hit 100,000 residents last year, after growing by about 10 percent since 2010, according to U.S. census estimates. It’s the state’s second-fastest growing county, after Gallatin County, home of Montana State University, and one of the fastest-growing rural counties with populations over 25,000 in the United States.

While many rural counties have been shrinking for years, others with strong recreational industries, such as mountainous western towns where people can take a quick hike or southern states with year-round golfing weather, have been growing rapidly. These populations are growing as it becomes easier to work from anywhere, and as more people retire and move away from the city.

The trend is part of what drove the overall slight growth of the rural population in the United States from 2016 to 2017, for the first time since 2010, according to a Stateline analysis of census data. (Rural counties are those defined by the U.S. Office of Management and Budget as outside cities and their suburbs.) The population in rural counties grew by only about 33,000 during that time, to about 46 million. While counties with large mining and farming industries shrank, counties with large recreation industries grew the most, by about 42,000, to about 6.3 million.

This includes Flathead County, Montana, and other counties with or near mountains, such as Teton County, Idaho, near Grand Teton National Park, which have seen double-digit population growth; and Eagle County, Colorado, home of ski towns Avon and Vail, which has grown 5 percent since 2010. Rural counties on the edges of suburbs, where land is cheaper and recreation is right out the back door, such as Wasatch and Summit counties in Utah, have also seen double-digit growth.

Recreation is driving their economies. Outdoor recreation generates about $124.5 billion in federal, state and local tax revenue each year, according to a 2017 report by the Outdoor Industry Association. That’s up from about $79.6 billion in 2012. Western rural counties with more protected public land have higher income levels and faster economic growth, according to a 2012 study by Headwaters Economics, a nonprofit research organization based in Bozeman, Montana.

Each summer, a few million people visit Glacier National Park, which is about 30 miles from the hub of Flathead County, Kalispell. With more visitors and residents, those who manage the public land — federal, state and local officials and volunteers — say it’s been challenging to ensure the upkeep of campgrounds, trails and other amenities, and to expand in a way that won’t harm the surroundings.

“We don’t want to love it to death,” said Janette Turk, a spokeswoman with Flathead National Forest.

Many people who live here say it still feels rural, and they like it that way. The county is about the same size in square miles as Connecticut, with about 3 percent as many people. Residents are clustered in several small towns that are miles apart, such as two tourist towns — Bigfork, on Flathead Lake, and Whitefish, near the base of a popular ski resort.

Kalispell houses nearly a quarter of the county’s residents, and its mile-long Main Street resembles that of a small town, with locally owned stores and diners. 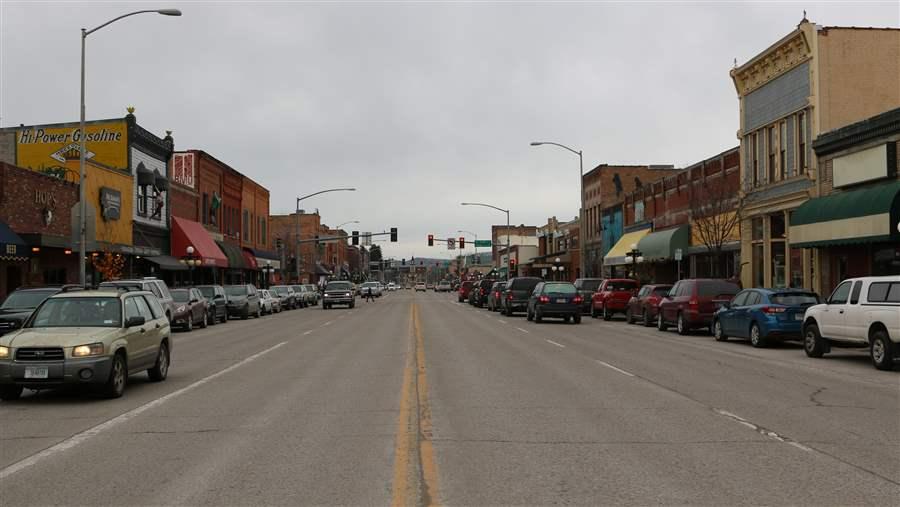 Downtown Kalispell is quiet in shoulder season, when most of the tourists are out of town. Kalispell is the hub of Flathead County, which is growing quickly as more people move closer to the mountains.

Old friends gather in the mornings at Sykes, a historic diner and market in Kalispell’s downtown. One recent Tuesday, as the regulars started filing in around 9 a.m., a group of men filled a reserved table near the bar.

One of the men, Ray Thompson, said it’s easy to “get lost in the speed of things,” now that the town is growing. Thompson owns the restaurant and renovated it in 2010, but kept the original atmosphere and the 10-cent coffee. He thinks growth is good for the county, but, like many other residents, he has some worries.

There is a lack of affordable housing for renters and buyers, and housing is becoming more expensive, the mayor, Mark Johnson, said. The typical home value has gone up by 6 percent since 2009, to about $237,000, according to census data.

The elementary schools are brimming with children, the superintendent, Mark Flatau, said. Enrollment in the district has increased 9 percent since 2010, from 5,450 to 5,920. This has forced schools to get creative: Small groups have met in modified janitorial closets, Flatau said, and some students have started learning in large classrooms with the equivalent of two classes, with two teachers. The new school that is being built will help, he said.

And then there’s the traffic, which Thompson and other longtime residents didn’t ever expect to have to deal with.

“There are these kinds of things that leave you concerned,” Thompson said. “But there are good families and good people.”

Just north of Main Street, the growth is more obvious. Construction cranes clutter the big sky for which Montana is known. In the past few years, new commercial buildings, homes and big box stores have sprouted from wheat fields. Signs staked in empty fields advertise more development to come.

There’s a Walmart, a Harbor Freight Tools, a Hobby Lobby, and, soon, an REI. Johnson calls this part of town “consumption junction,” and others scornfully call it “Anytown USA.” 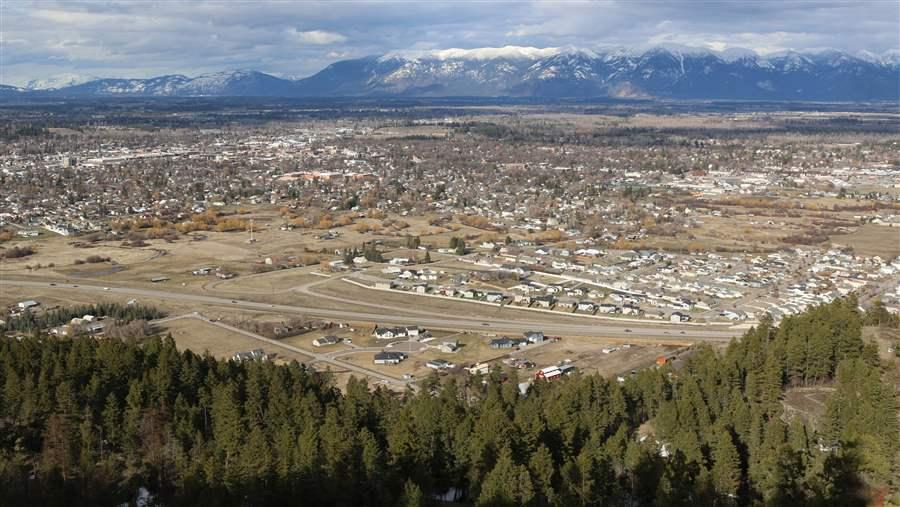 A view of the city of Kalispell, Montana, from the top of Lone Pine State Park. In the distance are the vistas of Glacier National Park.

The growth here and in other rural recreation spots follows the “people first, jobs follow” model, said Bryce Ward, an economist at the Bureau of Business and Economic Research at the University of Montana. Retirees, rich professionals, telecommuters and entrepreneurs are some of the groups that are driving the growth, Ward said.

“A lot of people get off the plane and say, ‘This is nice,’ and some find a way to stay,” Ward said.

That’s what McAllister, a competitive bike rider who works as a dentist in Kalispell, did. Originally from Great Falls, more than 200 miles southeast of Kalispell, McAllister left for college and to serve in the U.S. Army. He moved back to Montana two years ago so he could let his dogs run around off leash and go on hourslong bike rides through secluded, serene forests on workdays.

“You are definitely going to make more in a city,” he said. “But it’s just not the lifestyle I wanted.”

The economic growth is following the people. The services and specialties at Kalispell Regional Medical Center are growing and people are coming from farther away to get medical care, according to a recent report by the University of Montana bureau. While many people still work multiple, seasonal jobs, there are more high-paying, year-round jobs. There was a 29 percent increase in jobs in Flathead County from 2000 to 2015, according to Headwaters Economics.

“The region is becoming more self-sufficient,” said Kate Lufkin, marketing and communications manager for the Kalispell Chamber of Commerce, Convention and Visitor Bureau. She moved to the county a few years ago from Missoula, because she was a competitive horse rider and Kalispell houses one of the largest equestrian events in the country. She doesn’t compete anymore, but she plans to stay here, at least for now.

Lufkin can be at the top of Lone Pine State Park after work within 10 minutes, she said. “That is cool. That is so cool.”

It’s hard to tell whether tourism is driving the growth in Flathead County, or if the growth is driving an increase in tourism, or if it’s a little of both.

Some people, such as Lufkin, think social media has played a part in putting the area on the map. Lufkin said word has spread about the beauty of Glacier National Park and the surrounding area as it’s become easier to share high-quality photos and videos instantly online.

For decades now, visitors to Glacier hovered around 2 million a year. But in 2016, an estimated 2.9 million people trekked out to the park, and last summer the number hit more than 3 million for the first time. More people are also visiting state parks in the area, along with Whitefish Mountain Resort, the popular ski resort. 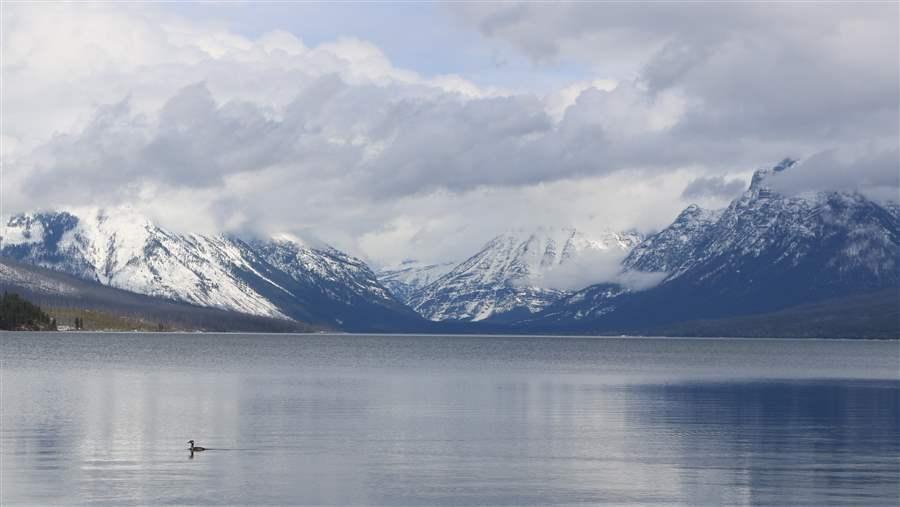 A duck swims on Lake McDonald in Glacier National Park. More people are visiting the park, in northwest Montana, in the last few years.

The growth has pushed park officials and business owners to develop more opportunities for recreation. Whitefish Mountain Resort has added ski lifts and summer activities, such as an aerial adventure course. Nonprofits in Kalispell and Whitefish have purchased forestland and built expansive trail networks. Flathead National Forest is hoping to add more campgrounds.

The question is how to keep the recreation authentic as it grows, said Mark Schurke, owner of Base Camp Bigfork, an outdoor adventure business in Bigfork. Base Camp offers dog-sledding in the winter and other guided activities in the summer. He said the growth is a good thing, as long as it is managed well.

“The more recreating people are doing,” he said, “the more they are going to value the land.”

In the next few years, county, city and nonprofit partners plan to tear out the railroad tracks that run through downtown Kalispell and put in a new rail park. The hope is that soon, on either side of a new path where the tracks used to be, shops, businesses and residences will tower above any of the town’s current buildings.

Another goal is to make housing more affordable as the county continues to grow, which everyone thinks it will: Enough babies are born at the medical center every week to fill an elementary school classroom.

“That’s the crazy part of it,” Lufkin said. “We’re growing like mad.”