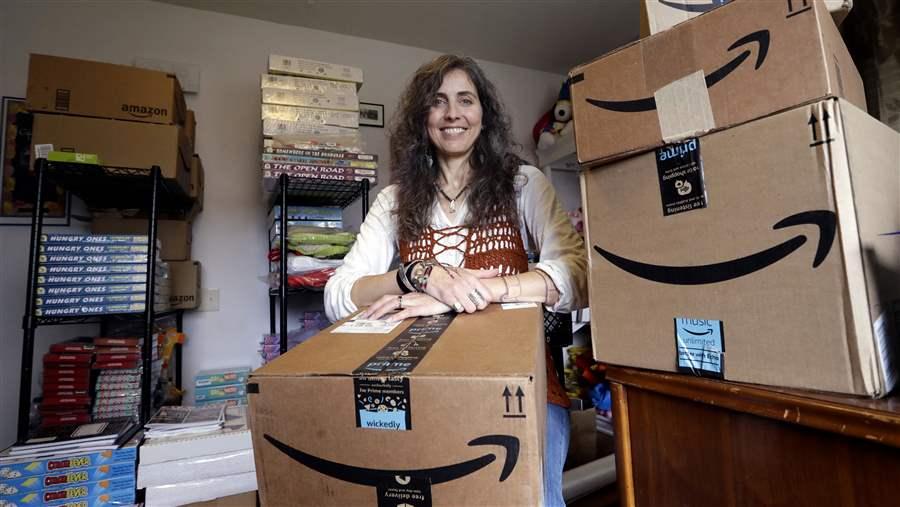 Adrienne Kosewicz, owner of Play It Safe World Toys, in her Seattle home office. Kosewicz collects sales taxes on her transactions, through Amazon. The Supreme Court is considering a case that would require all online sellers to collect and remit sales taxes to the 45 states, plus Washington, D.C., that have a sales tax.

American consumers who live in the 45 states with sales taxes could end up paying more for online purchases if the U.S. Supreme Court rules that all online retailers must collect and remit the taxes to states and the District of Columbia.

The justices heard arguments in South Dakota v. Wayfair Inc, a case in which the state contends that a 1992 high court ruling prohibiting the collection of sales taxes from any seller that does not have a physical location in the state is outdated. The justices seemed split on the issue. Several of the justices questioned the online retailers’ central argument against the South Dakota law: that collecting and sending in the taxes from the more than 9,000 jurisdictions that impose them would be burdensome and too complicated, especially for small sellers.

But others supported the businesses, and Chief Justice John Roberts suggested that the “problem has peaked” since Amazon, the biggest online retailer, already collects sales taxes, and that the problem may correct itself further over time.

An attorney for Wayfair and other online retailers, George Isaacson, argued that complying with tax laws in the many jurisdictions, fending off lawsuits involving transactions, and the comprehensive record-keeping required for a potential audit would hurt small sellers.

But Justice Ruth Bader Ginsburg, noting that brick-and-mortar retailers, as well as Amazon and many other large online companies, already collect and remit the taxes and keep similar records, suggested it would put small online companies on a level playing field. “Why isn’t it, far from discriminating, equalizing sellers?”

And Justice Neil Gorsuch asked Isaacson, "Why should this court favor those who don’t [have physical presence in a state] over those who do?"

That led Isaacson to reiterate the complex nature of the many tax laws. But Justice Steven Breyer said he was having a hard time getting a handle on actual costs. “What does it cost a mandolin seller who sells mandolins on the internet, to sell them in 50 states? How much does it cost Amazon to comply?”

Isaacson said he didn’t know the Amazon numbers, but noted that his brief before the court says costs for businesses could be up to $250,000 a year.

But South Dakota Attorney General Marty Jackley said software to handle the tax transactions could cost as little as $12 a month for up to 30 individual sales.

Several of the justices suggested that Congress is better positioned to write a law governing sales tax collections, but Jackley dryly noted that Congress has failed to do so in the quarter century since the 1992 Quill v. North Dakota decision, which restricted state sales tax collections to retailers with a physical presence in the state. Several senators and U.S. House members, including Virginia Rep. Bob Goodlatte, the Republican who chairs the House Judiciary Committee, sat in the audience. Goodlatte filed a friend-of-the-court brief asking the justices to let Congress act.