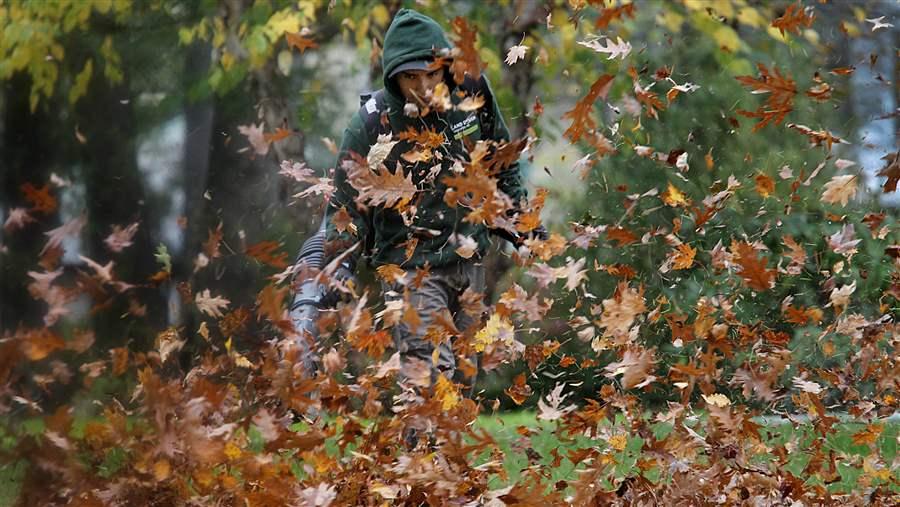 A leaf-blowing landscaper clears a yard in Newton, Massachusetts, where residents have taken to the streets to confront yard maintenance companies they believe are in violation of a recently imposed noise ordinance. Cities and states across the country are taking action to curb noise.

NEW YORK — One of the quietest places in this noisy city is in the middle of the Metropolitan Museum of Art, one of the largest art museums in the world, with 7 million visitors a year.

Most don’t know of the tiny Astor Chinese Garden Court tucked deep within the giant museum. And so, it is quiet here.

In a city whose cacophony can reach 95 decibels in midtown Manhattan — way above the federal government’s recommended average of no more than 70 decibels — the commotion over all that racket involves irate residents, anti-noise advocates, bars, helicopter sightseeing companies, landscapers and construction companies, as well as City Hall. The city’s 311 non-emergency call service gets 50,000 calls a day, and the No. 1 complaint is noise.

Now New York University has started a five-year study funded by the National Science Foundation to monitor noise in New York. The Sounds of New York City project aims to track sound across the city. But what policymakers will do with the information is not yet clear.

No studies have been done on the change in city noise over time, whether it is getting worse or by how much. But experts point to rising complaints, more lawsuits, more people with hearing problems, and studies showing noise has negative health effects.

But those levels are way above recommendations made by the European Union. In 2009, the EU set noise guidelines of 40 decibels at night to “protect human health.” And it said steady, continuous noise in the daytime — such as the noise on highways — should not exceed 50 decibels.

“We’re in active denial” about the effects of noise, said Rick Neitzel, director of environmental health policy at the University of Michigan in Ann Arbor. “We’re far, far behind what Europe is doing.”

No Place is Really Quiet

Almost no place in the continental United States is free of man-made sound.

When it mapped noise across the country, the U.S. Department of Transportation’s Bureau of Transportation Statistics in 2017 found that 97 percent of the population is subjected to man-made noise. A recent study of 290 national park sites found that 67 percent have significant human-caused noise, said Rachel Buxton of Colorado State University in Fort Collins.

Aircraft noise fell by 95 percent from 1970 to 2004 as plane engines got quieter, according to the Federal Aviation Administration. But local battles over airport and airplane noise continue for communities in flight paths. In the national parks “the biggest culprit is aircraft, the planes overhead, and then road traffic and sounds from industrial sources like oil and natural gas drilling,” said Buxton, who participated in the study of national park noise.

“We’ll be hiking in Rocky Mountain,” she said of the national park, and the background noise “drives my husband absolutely loony.”

People in poorer and racially segregated neighborhoods live with higher levels of noise, according to a 2017 study led by the School of Public Health at the University of California at Berkeley. Neighborhoods with median annual incomes below $25,000 were nearly two decibels louder than neighborhoods with incomes above $100,000.

And communities where at least 3 in 4 residents are black had median nighttime noise levels of 46.3 decibels — four decibels louder than communities with no black residents.

It’s hard for cities and residents to make meaningful change in overall noise levels because efforts “are so siloed and piecemeal,” said Arline Bronzaft, an environmental psychologist whose research on the effect of noise on children in schools in the 1970s helped lead to improvements in insulation for schools along railroad tracks. She also helped the city of New York revise its noise regulations in 2007 as an advocate and advisor to the mayor’s committee on noise.

New York updated noise regulations in 2005 and again in 2007 to set maximum noise levels and restrict the times of day that construction and other noises could be above those levels. “People are only worried about the noise that affects them. People say, ‘Well, you live in a city. That’s what you get for living in a city.’”

Noise doesn’t just affect hearing, noise activists say; it can cost your health. A study by the University of Michigan showed a link to cardiovascular disease and heart attacks, according to Neitzel, who conducted the study.

“The consensus is that if we can keep noise below 70 decibels on average, that would eliminate hearing loss,” Neitzel said. “But the problem is that if noise is more than 50 decibels, there’s an increased risk of heart attack and hypertension,” he said. “Noise at 70 decibels is not safe.”

According to the Earth Journalism Network, when you hear a jackhammer, that’s 130 decibels of noise; a chainsaw, 110. At a rock concert standing near the speakers? 120. Getting passed by police with sirens blazing? 120. Behind a garbage truck? 100. 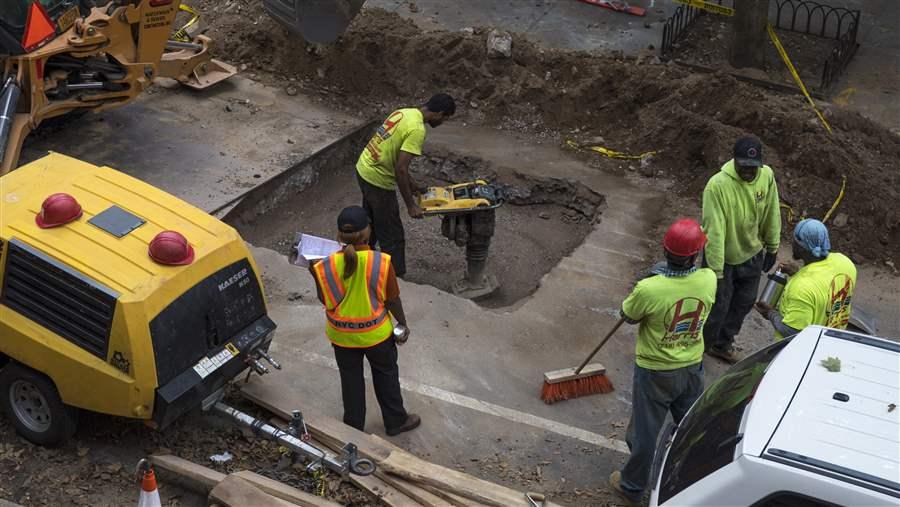 Contractors repair an underground sewer pipe in Brooklyn, New York. A new study aims to track sound across the city.

Trying to Quiet the Noise

A few states and cities are beginning to do something — at least a little something — to quiet things down.

In Texas, new “quiet concrete” is being tested on two stretches of highway on Interstate 10 and U.S. 290. The $12.4 million project is aimed at replacing concrete sound barriers that won’t be needed because highway traffic will be quieter.

“Most of the roaring noise from highways comes from the tires on the road, not the engine or exhaust noise,” said Robert Bernhard, vice president for research at the University of Notre Dame and an expert in noise-control engineering. Traditional concrete is raked with grooves that run across the road to drain water, he said. “That’s where you get that whining, wheeeeee! sound.” Quieter concrete has grooves that go with traffic.

The quieter concrete drops highway sound levels 5.8 decibels on average, a study in Texas found. That is equivalent to a roughly 70 percent reduction in traffic, according to Emily Black, spokeswoman for the Texas Department of Transportation.

In Phoenix, more than 200 miles of highway have been resurfaced with a concrete mix that uses pieces of used rubber tires to dampen sound, said Doug Nintzel, spokesman for the Arizona Department of Transportation. In 2017, a $9.8 million project resurfaced 11 miles of Interstate 17 in Phoenix, the most recent section of a 20 year, $30 million program to cut highway noise with rubberized concrete. More than 6,000 recycled tires are used in every mile of rubberized four-lane highway.

“It means millions of tires have been recycled and kept out of landfills,” he said.

Elkhart backs up its regulations against “loud and raucous sounds” with stiff fines, particularly for hot rods and tricked-out motorcycles whose exhaust systems have been manipulated to make them louder. The first violation will cost you $250; the second one, $500; the third, $1,000; and it’s $1,500 for each violation after that.

“These biker gangs that roar through town can get up to 125 decibels,” Vite said. The city has collected $1.6 million from noise fines, and used it to buy four new police cars and other things, he said.

Leaf blowers are another noise flashpoint.

Hundreds of cities have leaf blower regulations, but they are difficult to enforce. Regulation has been prevalent in California, Arizona, Hawaii, Illinois, New York and Massachusetts, according to Quiet Communities, a nonprofit that advocates for noise control.

State lawmakers in Hawaii have considered a ban on gas blowers. And cities like Washington, D.C., have been considering a ban for several years, but not passed one.

Washington, New York and Los Angeles also have struggled with helicopter noise. In Washington, military flights are to blame; in New York, it’s sightseeing flights; and in Los Angeles, it is filmmakers trying to get the perfect shot. About three-quarters of the roughly 145 daily flights in the D.C. area are to or from the Pentagon, according to a letter to the Pentagon from Virginia, Maryland and District of Columbia congressional representatives.

The Pentagon, located in Arlington, Virginia, has agreed to study the noise and ways to minimize it.

In New York, the crash last month of an open-door sightseeing helicopter that killed all five passengers has led to a ban on such copters by the FAA while the crash is being studied. But that doesn’t affect the hundreds of other tourist helicopters that buzz the city, said Adrian Benepe, director of city park development for the Trust for Public Land and former New York City parks commissioner.

“We have as many as 350 flights a day, in daytime hours, that fly low down the Hudson River to the Statue of Liberty and back up the New Jersey side,” he said. “I have seen a helicopter fly by every minute of every day.”

He said the flights have ruined the relative quiet of the city’s major parks on the end of Manhattan Island, such as Battery Park, Hudson River Park and the elevated High Line. Tourist helicopters have “destroyed any sanctuary in the parks,” he said.