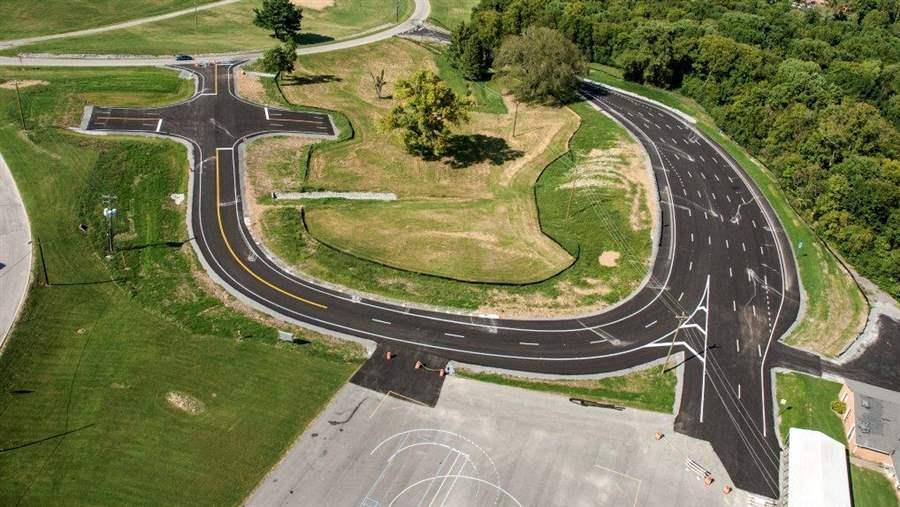 An aerial view of the training track for first responders on the grounds of the Tennessee Highway Patrol’s training center in Nashville.

NASHVILLE, Tenn. — About a dozen miles from downtown, in a wooded area on the grounds of a former state mental health institution, there’s a stretch of road where car crashes, hazardous waste spills and fuel tanker fires are a good thing.

The road is a training track for Tennessee police, firefighters, emergency medical service crew members, state transportation workers and tow truck operators, built to teach them how to work together safely and efficiently when they respond to highway emergencies.

Deer and wild turkey often emerge from the surrounding hills, and groundhogs have taken up residence in a field that sits in the middle of the 1,800-foot track, the first in the nation created for emergency responders. It has interstate-like roadways with two to six lanes that simulate actual traffic movement, a four-way intersection, a two-way interchange, cable and steel guardrails and moveable barriers.

Over two dreary, rainy days last month, 15 emergency responders gathered at the track and in a classroom to learn how to better handle such incidents as cars flipping over a guardrail, tractor-trailers spilling dangerous chemicals, and medical rescue helicopters requesting a safe place to land near the scene of an accident.

“This is really great. It has all the elements of the real world for workers on the highway,” said Joseph Webb, a trainee and operations supervisor for the Tennessee Department of Transportation in Chattanooga whose staff helps control traffic during a crash. “You can make mistakes here and you’re not out there on the actual highway making them.”

The idea is to teach participants to clear the scene quickly to reduce the likelihood of secondary crashes — those that occur after the initial one, often caused by drivers who aren’t paying attention to the slowdown ahead or are gawking at an accident.

The program is a partnership between the Tennessee Highway Patrol, which hosts the classes and houses the track and training center, and the Tennessee Department of Transportation, which puts together the classes and teaches them, along with instructors from other first responder agencies.

Highway patrol officials came up with the idea of the track, which cost about $912,000 and was funded by the state transportation agency, mostly with federal highway safety dollars.

“It was simple for us to do, an inexpensive opportunity for us to save lives,” said Tennessee’s transportation commissioner, John Schroer. “It gives people an opportunity to work in an area that’s safe and learn about situations that can happen and how not to make that one little catastrophic mistake.”

More than 4,800 people have been trained on the track since it opened in late 2014. Some are supervisors taking advanced classes; others are lower-level first responders who have finished four hours of classroom training.

About 400 of the state transportation agency’s workers have been trained on the track, as have cadets who attend the highway patrol’s academy and the state’s training academy for county and city police departments. Recently, the Metropolitan Nashville Police Department has been sending its recruits as well.

“In the classroom tabletop training exercises, you’re using a large, desk-sized map and Matchbox cars like kids have,” said Lt. Shane Stafford, the highway patrol’s assistant training director. “When we’re able to train here at our facility, we use real cars that have been in crashes and real-life equipment. It’s completely different to have boots on the ground and actual people there you have to communicate with.” 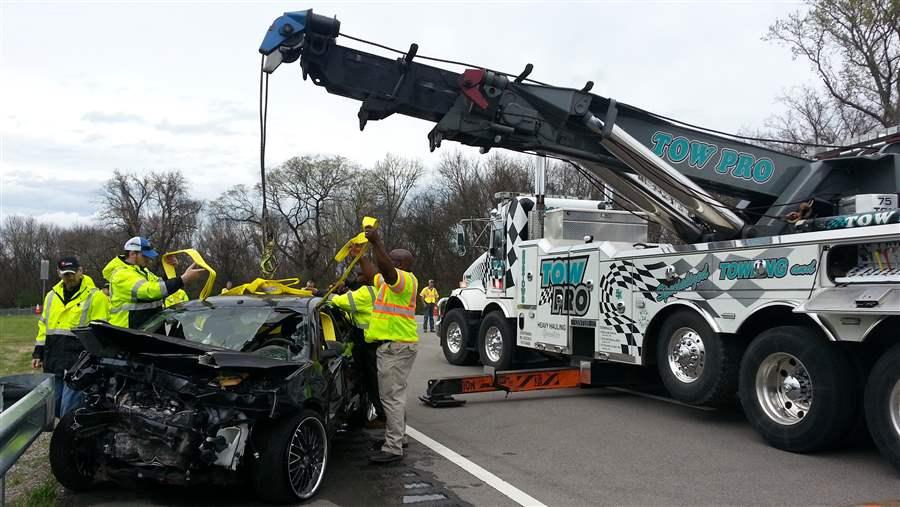 First responders practice wrapping long, heavy nylon straps around a disabled car that needs to be towed at a hands-on training track in Nashville.

Working on the highway is just plain dangerous, whether it’s transportation workers picking up trash by the side of the road or setting up work zones, police officers issuing traffic citations or investigating crashes, or tow truck drivers hooking up smashed cars.

Cars and tractor-trailer trucks often whiz past stopped emergency vehicles, even though their lights are flashing and “move over” laws in every state require drivers to slow down or switch lanes if possible. Failing to comply can result in fines and, in some states, jail time. But many drivers aren’t aware of the law or just ignore it.

“Traffic on the roadside is one of the greatest threats to anyone responding to emergencies on the road,” said Russ Martin, government relations director for the Governors Highway Safety Association, which represents state highway safety offices.

Every year, emergency responders die or are injured while doing their jobs on the highway. In 2017, nine police officers were struck and killed on the side of the road, according to the National Law Enforcement Officers Memorial Fund.

“My troopers worry much more about getting run over than about getting shot,” said Col. Tracy Trott, who commands the Tennessee Highway Patrol and whose officers issued 2,100 move-over citations last year.

The risks can be even greater for transportation workers. Three Tennessee transportation department workers were struck and killed by vehicles in 2016 alone, said agency chief Schroer, who knows firsthand how scary it can be after he spent a day picking up animal carcasses on the interstate with a transportation crew.

“When you’re on the inside lane and you’ve got a concrete Jersey barrier, and there’s a dead deer there, and you’ve got tractor-trailers passing you and people honking, it’s frightening,” Schroer said. “All it takes is one truck driver texting.”

Trott said that’s why it’s so important to teach as many of the state’s emergency responders as possible on the simulated track how to do their jobs more safely. “We open it to any responders free of charge. We’ll feed them and house them if they need it,” he said. “We’re doing this for the safety of our people, in a nutshell.”

Participants at last month’s advanced training class were all supervisors, many from rural areas near Chattanooga. Wearing bright green reflective vests with orange stripes, they gathered at the track near a smashed-up black Pontiac G6 on the shoulder, its windows broken and hood crumpled.

Instructors talked about how and where to safely set up orange cones that “transition” traffic into fewer lanes and how to “terminate” the scene, gradually moving motorists back into lanes that may have been closed.

Trainees learned the safest way to position their vehicles, and how a fire truck should be parked on an angle on the shoulder to serve as a buffer between the crash and emergency responders to protect them from being hit in a secondary crash.

They learned the importance of wearing reflective garments, including gloves and leggings, and that not all of them need to keep their lights flashing, especially in darker areas, as this can be distracting or blinding to motorists.

And they learned how to work as a team with other agencies at the scene.

“We all focus on our own little disciplines,” said trainee Michael Bonner, director of Coffee County EMS in Manchester, Tennessee. “We need to know what other people are doing. This training makes you realize you’re not the only person in the world.”

Bonner said EMS workers often are focused solely on the crash victim and aren’t aware of what’s happening around or behind them.

“I’ve heard an 18-wheeler’s brakes lock behind me. That’s really scary,” he said. “When we get on the scene we don’t have time to worry, so it’s important that other people there are helping to protect us.”

One instructor told trainees they need to think creatively at the scene. “There may be spilled widgets all over the road, and it may be the wrecker driver’s job to clean them up,” said Lacy Word, an operations manager for the transportation department. “But it’s in your interest to help him do that so you can clear the scene ASAP.”

Late in the afternoon, Kenny Bennings, who works for Tow Pro in Nashville, drove his heavy-duty black recovery wrecker onto the track. It’s large enough to lift and tow a tractor-trailer that has jackknifed on the side of the road or to pluck a vehicle out of a ditch. He showed the group how he safely positioned his truck, and trainees helped him wrap long, heavy yellow nylon straps around the disabled black car on the shoulder. Using a rotating crane, the car was hoisted in the air and set down by the truck where it could be towed.

In the past, Bennings said troopers often didn’t give detailed information to his shop about a crash or what type of equipment was needed. That meant an operator might arrive with a wrecker that wasn’t big enough for the job. The shop would have to send other equipment, delaying the cleanup, holding up traffic even longer, and increasing the odds of a secondary crash.

But since he went through training at the track last year, Bennings said, communication with the troopers has improved a lot, and the shop is able to send the right equipment the first time. “I have their phone numbers, and they have mine. We do a lot more talking now,” he said. “We’re all on the same page.” 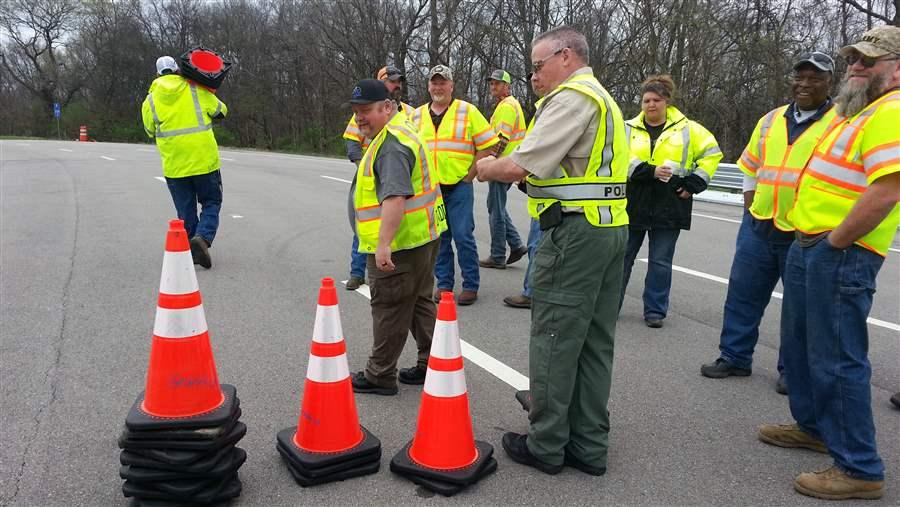 A group of first responders gathers for training on a recent morning at Tennessee’s highway training track in Nashville.

The Federal Highway Administration since 2012 has promoted a multidisciplinary training course aimed at improving the safety of more than a million first responders who deal with highway crashes and other traffic incidents. Some sessions are in a classroom, some are web-based, and some train the trainers.

More than 326,000 people have been trained as of this month — about 28 percent of those who need to be — according to the federal agency.

But Tennessee was the only state that had its own track as part of that program — until recently.

While officials from Illinois, Wisconsin and Utah are among those who have been to Nashville to see the track, and Arizona officials said they are interested in identifying a site and getting funding to build one, only Colorado has gone ahead and done it.

The Colorado Department of Transportation last week opened its own training track, in partnership with Douglas County and the state patrol.

Ryan Rice, an operations manager at the transportation department, said officials from his agency and the state patrol had been to the Nashville track and been impressed by it. They also were motivated to build their own track because three Colorado state troopers had died in move-over incidents in a year and half, most recently in November 2016, he said.

Douglas County provided the land, and the state transportation department spent $1.5 million to build the quarter-mile-long, four-lane straight track that mimics an interstate, according to Rice. Multidisciplinary training is set to begin this summer.

“We need to break down those siloes and rigid boundaries,” Rice said. “Teamwork in traffic incident management is the key. It’s like a NASCAR pit crew. To get to that level of safety and efficiency, they have to train together.”