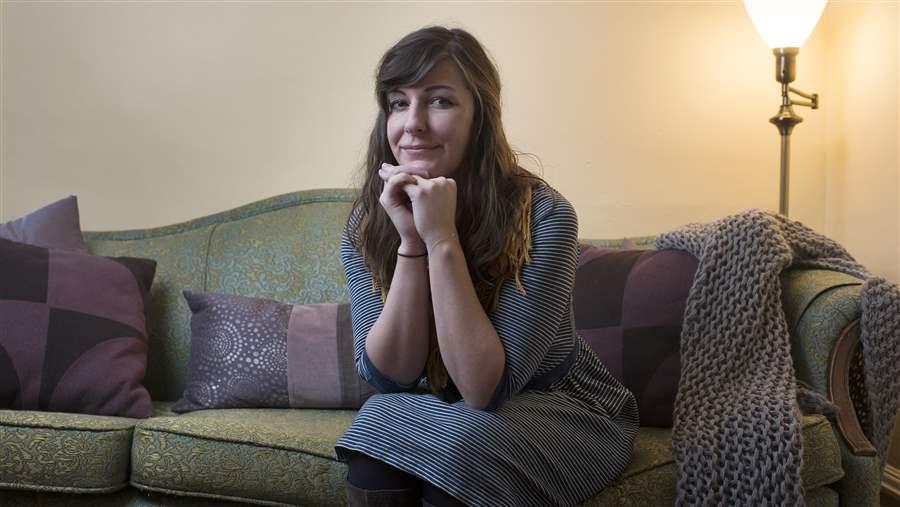 A children’s librarian in Staunton, Virginia, Sarah Pool is struggling under the weight of her student loan debt. States are stepping up to help students with loan repayments by passing laws to create ombudsmen.

Editor's note: This story was updated April 10 to correct the number of states (five) that have enacted legislation on this issue since 2015.

Marcia “Cia” Price is 37 years old and has more than $90,000 in outstanding student loan debt — more than what she originally owed. Like many indebted former students, Price has had her share of frustrations in trying to navigate the loan repayment thicket, especially during earlier days when she didn’t make a lot of money and needed help restructuring her loan.

She’s not alone. The U.S. government says a combined 43 million people owe more than $1.3 trillion in student loans. About 4.6 million people were in default at the end of last year.

But Price is unusual in one respect: As a member of the Virginia House of Delegates, she’s in a position to help.

Price, along with several other representatives in Virginia, sponsored legislation this year that establishes a state student loan ombudsman. The new office is intended to be an advocate for borrowers, helping them to ease their repayment burden by renegotiating loan terms, asking servicers for permission to delay payments, and helping borrowers transition into careers where loan forgiveness is an option. Democratic Gov. Ralph Northam signed the legislation into law last week.

The state action to assist student borrowers comes even as the Trump administration has warned that regulating loan servicers is a federal responsibility.

Last month, the U.S. Department of Education published a notice in the Federal Register saying that “State regulation of the servicing of Direct Loans impedes uniquely Federal interests” and that “a requirement that Federal student loan servicers comply with 50 different State-level regulatory regimes would significantly undermine the purpose of the Direct Loan Program to establish a uniform, streamlined, and simplified lending program managed at the Federal level.”

Since 2015, at least five states have enacted a student loan “bill of rights” or created an ombudsman or something similar, according to Higher Ed Not Debt, a coalition of unions and other liberal groups seeking action on the student debt issue.

California’s law is the most sweeping, calling for special licensing of student loan servicers and tighter regulation. Several more states could follow Virginia in enacting bills this year. Virginia’s ombudsman will be able to resolve disputes and work with borrowers to understand their rights.

Washington became the first state this year to enact bill of rights legislation, which calls for an “advocate” and licensing of loan servicers. Connecticut (in 2015), California (2016), and Illinois and the District of Columbia (2017) have enacted similar laws. 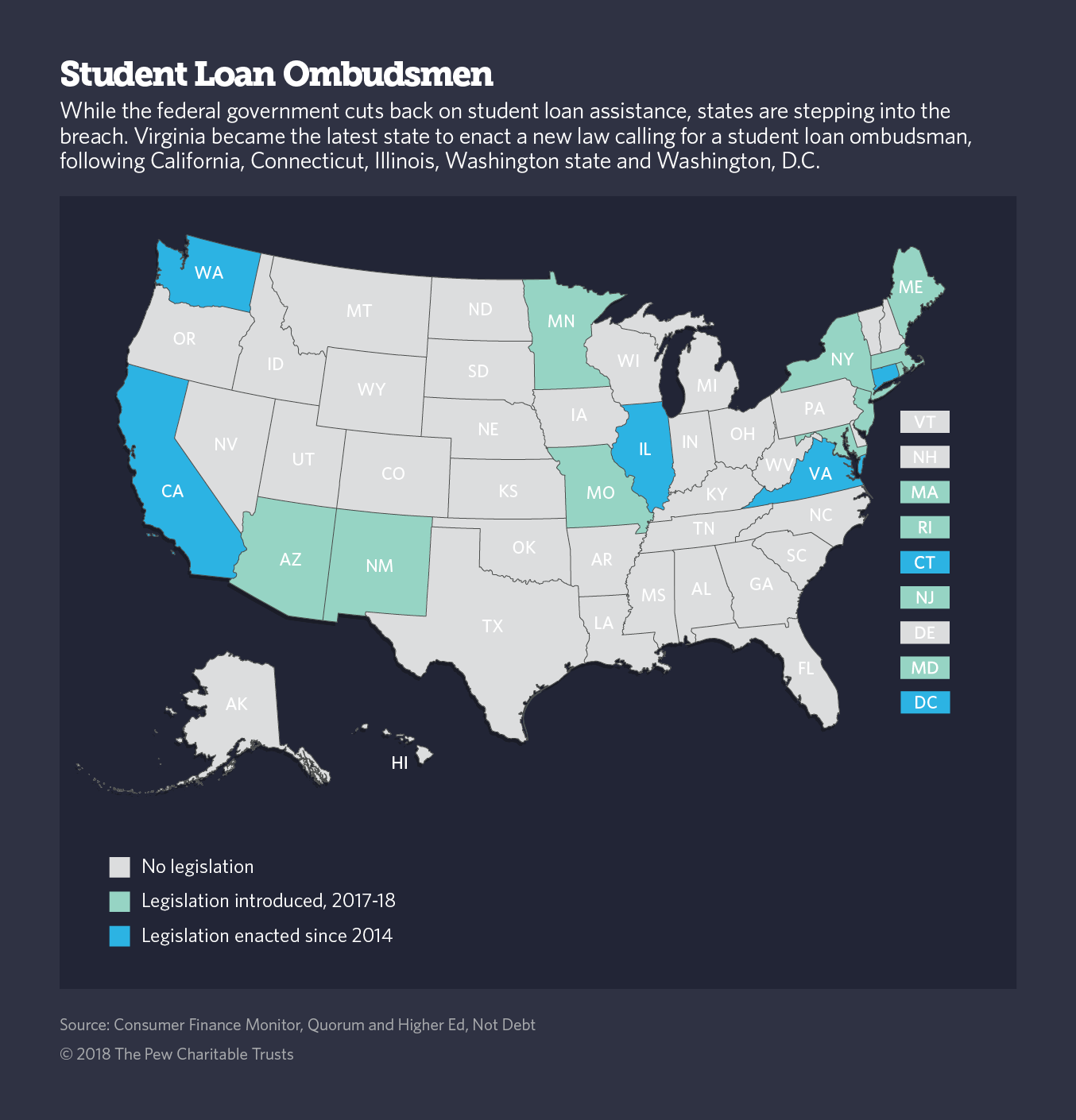 “I have a personal interest in making sure that people with student loans in Virginia have an opportunity to pay back their loans and protect their and their family’s financial security,” said Price, who has a bachelor’s degree from Spelman College and a master’s from Howard University.

“Paying for education should not make someone go broke,” she said. “I have more than $90,000 in student loan debt. I know some of the struggles that go with it. I did experience some of the unfair practices of the student loan services.”

After college and graduate school, Price said, she got a clerical job in a dentist’s office and a community organizing post. Neither job paid much, but she kept up with her $75,000 in loans until a car accident landed her in the hospital and made it impossible for her to work for a time. Her loan servicing company agreed to allow her to postpone her loan payments, but she didn’t realize that the delay was adding to the total of what she owed.

She blames herself for not asking the right questions, but says that all she could think about in her pain and joblessness was putting payments off, not the repercussions.

An ombudsman, she thinks, would have explained her options better and perhaps come up with some less costly alternatives because he or she wouldn’t be “trying to make money off my call.”

Loan servicing industry representatives say that it’s not their fault that the rules and refinancing options on student loans are complicated. It’s the fault of the federal government, which makes most of the loans.

Winfield Crigler, executive director of the Student Loan Servicing Alliance, a trade association for student loan servicers, said her organization has no problem with “state ombudsmen as a trusted third party that the state can offer its residents.” Their problem, she said, is with bills that would set up borrowers “rights” that might differ from state to state. (The group recently sued the District of Columbia over its licensing and disclosure regulations for student loan servicers.)

Virginia recently defeated bill of rights legislation, which was separate from the ombudsman bill, but Price says she’ll be back next year with a similar measure that would also establish licensing criteria for student loan servicers.

The trade association argues that the federal government already regulates loan servicers, and that the problem is that many borrowers in danger of default don’t respond to the service companies’ attempts to offer them refinancing options and other payment plans.

In testimony to the Virginia Legislature, Crigler said: “Student loans are very complex already and SLSA is concerned that imposing multiple state licensing and regulatory requirements will create a patchwork of conflicting rules that will cause borrower confusion.”

Alexandria Wheeler, 28, of Hampton, Virginia, is already confused. She was among those who testified to the Legislature about her nightmare loan scenario. She suddenly found that her $20,000 balance had doubled to $40,000, even though she said she and her parents had been making interest payments. She said her loan servicer, Navient, hasn’t explained the increase.

“I just want the paperwork so I can match it up,” said Wheeler, who works as a community organizer for New Virginia Majority, a nonprofit where Price once worked. Price said the two are acquainted, but she did not ask Wheeler to testify.

A Navient spokesman, citing privacy rules, could not comment on the specific details of Wheeler’s loan. But spokeswoman Nikki Lavoie said that “98 percent of consumer complaints last year were related to federal loan policies which we cannot change, disagreements with loan terms that were set at the time the loan was made, or other issues unrelated to servicing errors.”