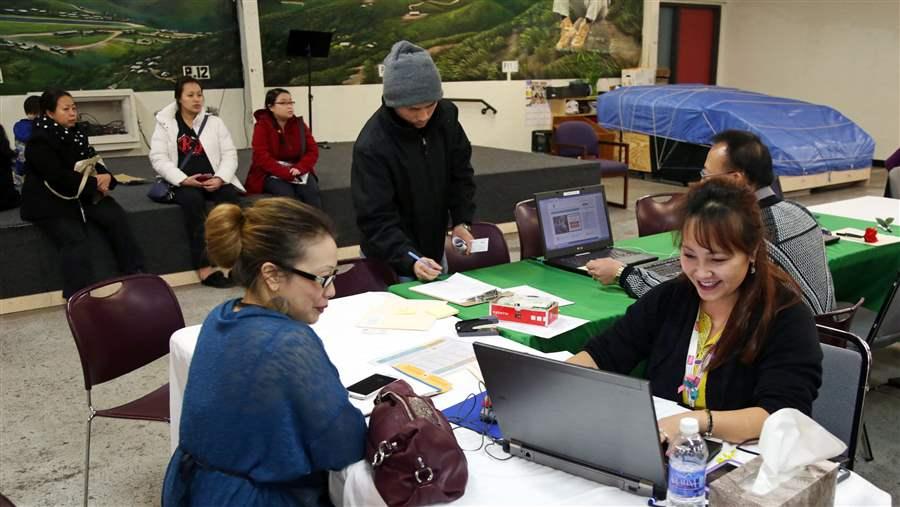 A woman signs up for health insurance on Minnesota’s exchange, MNsure, in St. Paul. The state’s reinsurance pool has helped reduce premiums on the exchange by 15 percent in 2018.

Editor's Note: This story was updated April 9 to correct the name of MNsure director Allison O'Toole.

A couple of years ago, the health insurance exchange in Minnesota – MNsure – was in deep trouble. Health insurance premiums for individual policies had shot up by as much as 67 percent, among the steepest increases in the country.  Insurers were abandoning the market, leaving 116,000 Minnesotans with scant choices.

The Minnesota Legislature offered a solution: a $271 million, publicly funded reinsurance pool that would help health insurance companies pay the most expensive medical claims, thereby lowering overall insurance premiums. The hope was that backstopping the insurers would stabilize the market and halt the rocket-like rise in premiums.

So far, so very good. In its first year, the reinsurance pool has performed even better than expected. According to the Urban Institute, 2018 premiums offered on MNsure not only didn’t increase, they fell by 15 percent.

Minnesota’s peers are paying attention. The Gopher State is one of four states trying to calm roiling health insurance markets by creating state reinsurance pools – even as actions by Congress and the Trump administration continue to create uncertainty in the health insurance industry.

Maryland became the latest to do so when Republican Gov. Larry Hogan last week signed a bill creating a reinsurance pool financed in part in the next year by a $380 million tax on health insurers. Another six states are taking steps to launch their own reinsurance programs.

Reinsurance has long had a place in the private insurance market.

Essentially, it entails insurance companies taking out their own insurance to protect themselves when they are hit by an unexpectedly high claim, “like when somebody needs a heart transplant or a liver transplant or something else where costs are over, say, $100,000,” said Brad Herring, a health economist at the Bloomberg School of Public Health at Johns Hopkins University.

A public health reinsurance plan works the same way, except the state reimburses insurers for claims that climb above a certain set figure, depending on the plan.

In Minnesota’s reinsurance program, health insurers are eligible for reimbursements from the state for claims between $50,000 and $250,000. The insurers are responsible for amounts over $250,000.

Allison O’Toole, MNsure’s chief executive officer, said Minnesota acted in response to soaring premium increases and the departure of insurers such as Blue Cross and Blue Shield, the largest seller of individual policies in Minnesota at the time. No insurers have left the Minnesota market since the reinsurance pool launched.

“We were taking it on the chin. We were really in crisis,” O’Toole said. “This has provided immediate and positive results.”

Alaska, which created a reinsurance pool in 2016, also saw a year-to-year decrease in premiums. A third state, Oregon, authorized the creation of a reinsurance program last fall, but that action came after the premiums had already been set for 2018.

But the fix in Minnesota is temporary. The Legislature ponied up about quarter of a billion dollars for two years, with a roughly equivalent amount expected to come from the federal government. But, O’Toole says, that state support won’t last.

“Minnesota had a significant budget reserve a year ago, so we had money for it,” O’Toole said. “We won’t have that going forward.”

That is why O’Toole and many other state officials want the federal government to help fill state reinsurance pools.

In December, Congress eliminated the so-called individual mandate as part of the new tax law, meaning that healthy people – who would pay premiums but be unlikely to need expensive care – can now opt out of insurance. And the Trump administration scrapped federal subsidies that were worth about $7 billion a year to insurance companies. Analysts say those actions are likely to lead to higher premiums for those remaining on the individual market and increased financial pressure on insurers.

There were two bipartisan bills in the Senate – one cosponsored by Republican Susan Collins of Maine and Democrat Bill Nelson of Florida, and the other by Republican Lamar Alexander of Tennessee and Democrat Patty Murray of Washington – that would have sent $5 billion a year to the states to finance their reinsurance pools. But neither was incorporated into the spending bill that Trump signed last month.

Avalere, a health policy research firm, estimated that the measure pushed by Collins and Nelson would have reduced 2019 premiums by 4 percent and increased enrollment in Affordable Care Act plans by 180,000. Not surprisingly, the bill had the strong support of the health insurance industry.

Although the Senate bills had considerable bipartisan support, there was significant opposition too. “This bailout approach is wrong and should be abandoned,” a report published last month by the conservative Heritage Foundation said. “It is fiscally imprudent and unnecessary.” It is the ACA’s “radical regulatory overreach,” that has caused chaos in the health insurance market, the report says.

At the same time, many left-leaning analysts say public reinsurance is yet another cumbersome solution to a fractured health care system that should be replaced by a single-payer model.

The Affordable Care Act set up a federal reinsurance pool to compensate insurers for taking on high-risk beneficiaries (who, under ACA provisions, could not be charged higher premiums than anyone else). The law set aside $20 billion, funded largely by a tax on insurers, for the years 2014 through 2016. After that, the pool disappeared, and the determination of congressional Republicans to repeal the ACA made renewal of the program a political impossibility.

States that want to establish their own reinsurance pools with some federal money must apply for a waiver from the U.S. Department of Health and Human Services to depart from some provisions of the ACA while still providing comprehensive, affordable health coverage.

In their applications to create reinsurance pools, states have argued that by reducing premiums, they will save the federal government money because it will have to pay less in tax credits for low-income policyholders.

Alaska created its reinsurance pool with $55 million from a tax on insurers, but it subsequently applied for and received a federal waiver, which is expected to bring in about $58 million in federal money. The state is hoping that because its individual insurance market is so small – about 23,000 people – the federal contribution will negate the need for it to put state money into the pool.

Oregon has committed $1.1 billion in state money, also raised through a tax on insurers, over 10 years and is hoping to receive $356 million in federal money during that period.

In February Wisconsin enacted a $200 million law that, should the federal government grant a waiver, will funnel $30 million to $50 million in state money into a reinsurance pool with the federal government picking up the rest. Democrats joined Republicans in favor of the bill in both houses. The main opposition came from the progressive group, Citizen Action of Wisconsin, which called the reinsurance plan a bailout for insurance companies.

In Colorado, an early analysis projected that if the state had spent $177 million to create a reinsurance pool in 2018 and received $119 million in federal money, premiums would have declined by 21 percent. Colorado lawmakers are working on a reinsurance pool proposal.

But some financially strapped states simply don’t have the money to set up reinsurance pools. In 2018, Minnesota’s pool will total $271 million: $140 million in state money and $131 million in federal dollars. Minnesota had to provide all the money upfront, and the federal government will pay its share during the course of the year

Not all states can afford to do that, said Sarah Lueck, a senior policy analyst with the Center for Budget and Policy Priorities, a nonpartisan research and policy institute in Washington.