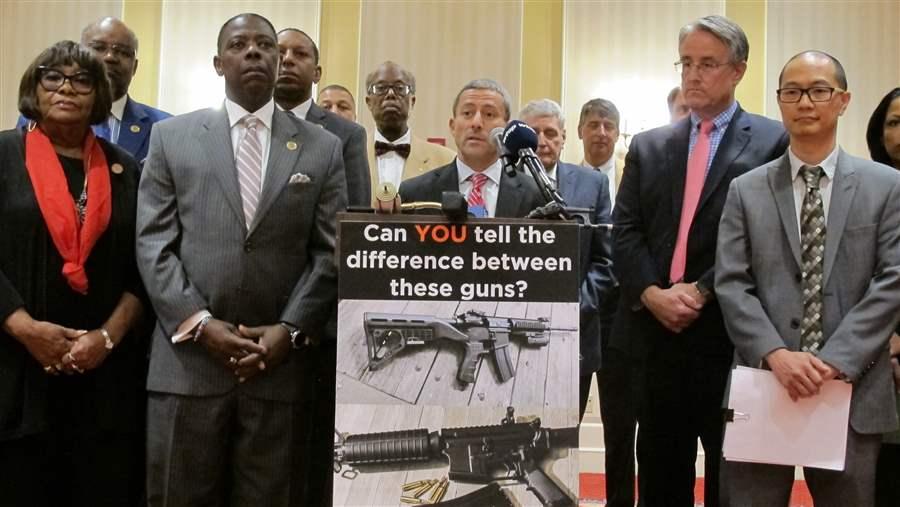 Maryland lawmakers and advocates hold a press conference to support banning ‘bump stocks.’ A bill to ban the devices was approved by the Maryland Assembly and Republican Gov. Larry Hogan plans to sign it.

The Maryland General Assembly has approved a ban on “bump stocks,” devices that allow rapid firing of semi-automatic rifles, making them almost as fast as fully automatic weapons. Republican Gov. Larry Hogan has said he will sign it.

The device was used in the mass shooting at an outdoor country music concert in Las Vegas last year that killed 58 and wounded more than 800. Since then, many states have considered banning bump stocks. Massachusetts, New Jersey, Washington, Florida and now Maryland have passed laws banning sales of the devices. Legislation has failed in other states, however, including Tennessee where it was rejected this week.

Prior to the Las Vegas shooting, bump stock bans had a hard time getting through state legislatures.

The Maryland bill bans owning, manufacturing, selling or purchasing devices labeled “rapid fire trigger activators,” another name for bump stocks. Maryland lawmakers also are considering so-called “red flag” legislation that would allow concerned family members, police or health workers to ask for a judge’s order to confiscate weapons from people judged to be a risk for killing themselves or others.

Opponents of the bump-stock legislation argue that the devices themselves are not the problem, and worry that the laws to ban them would lead to other gun accessories being banned as well.