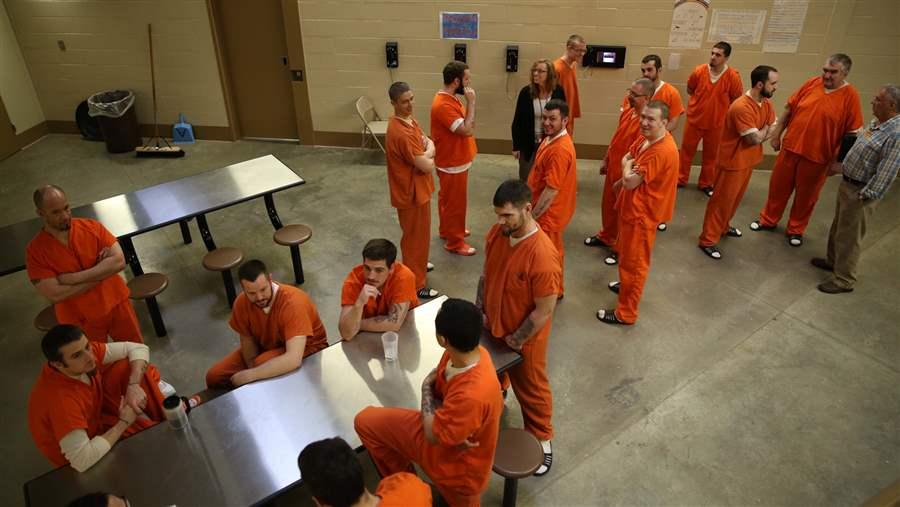 This story is part of an occasional series on the opioid crisis.

From the moment they are arrested, people with an addiction to heroin and prescription painkillers and those who are taking medications to beat their addictions face the prospect of painful opioid withdrawal.

At least a quarter of the people in U.S. prisons and jails are addicted to opioids. Those who are released rejoin their communities with dangerously reduced tolerance and nothing to blunt their drug cravings, making them highly susceptible to a deadly overdose.

Rhode Island is the only state that provides all three FDA-approved addiction medications, methadone, buprenorphine and a long-acting, injectable form of naltrexone known as Vivitrol, to all inmates. A recent study in the medical journal JAMA Psychiatry found that opioid overdose deaths dropped by nearly two-thirds among recently incarcerated people in the first year of a new program that screens and provides addiction medicines to all state inmates.

According to the study by Brown University researchers, the program not only reduces overdose deaths after the inmates are released, but also increases the likelihood they will stay in treatment and avoid getting arrested again.

Meanwhile in Massachusetts, which doesn’t provide methadone or buprenorphine to inmates, the U.S. Department of Justice is investigating whether corrections officials are violating the Americans with Disabilities Act by forcing inmates who were taking those addiction medicines when they entered prison to stop taking them while incarcerated.

Massachusetts lawmakers are considering a corrections bill that would require the state’s prisons and jails to offer all three FDA-approved medications.

A similar proposal is advancing in Connecticut, which has provided methadone to some inmates in some jails for six years. The bill there would expand the program to all medications for all inmates.

And at the federal level, President Donald Trump promised last month to screen every federal inmate — roughly 180,000 people — for opioid addiction and provide Vivitrol in residential treatment centers prior to release. Trump also called for more federal support for state, local and tribal drug courts to help provide “evidence-based treatment as an alternative to or in conjunction with incarceration, or as a condition of supervised release.”

Fewer than 1 percent of the more than 5,000 U.S. prisons and jails, housing more than 2 million inmates, allow access to the FDA-approved medication, even though medical societies, addiction experts and correctional health organizations support their use.

Finding the money to fund correctional drug treatment programs is a challenge in many states. But research shows that the cost of providing addiction medications in correctional facilities is outweighed over time by savings in both future health care and incarceration costs.

“In fact, not treating inmates with the community standard of care for addiction should be considered a violation of the U.S. Constitution’s Eighth Amendment prohibition on cruel and unusual punishment,” said Josiah Rich, a Brown University professor of medicine and epidemiology who coauthored the recent study of Rhode Island’s treatment program.

Standing in the way are sheriffs and other prison officials, who argue that allowing treatment inside prisons with methadone or buprenorphine — both narcotics that can be abused — will lead to the drugs being diverted within the prison and possibly to illicit street markets.

In Barnstable County, Massachusetts, for example, Sheriff James Cummings said he would not allow buprenorphine to be dispensed in his jail because it is considered contraband.

“We ruled out buprenorphine because it doesn’t work for the people we deal with,” Cummings said. “Inmates try to smuggle it into the facility every day. It’s a narcotic. They use it until they can get their next heroin fix so they don’t get sick and they sell it to get money to buy more heroin. It’s not a good fit.”

Instead, Barnstable in 2012 added Vivitrol to its re-entry program for opioid-addicted inmates who are scheduled to leave within the next two weeks. Cummings said the program has reduced overdose deaths and repeat offenses.

In general, Vivitrol is an easier sell in most prisons and jails, said Andrew Klein, who runs a Justice Department program aimed at getting more drug treatment into correctional facilities. But it’s not the best medication for everyone, he said.

In fact, nearly all corrections officials reject the use of either methadone or buprenorphine behind prison walls. That’s despite a history of research showing both medicines are highly effective at eliminating cravings, preventing overdoses and keeping people in recovery from opioid addiction.

Methadone has been used for addiction treatment almost exclusively in highly regulated clinics since its introduction in 1964. Buprenorphine has been available by prescription since 2002. 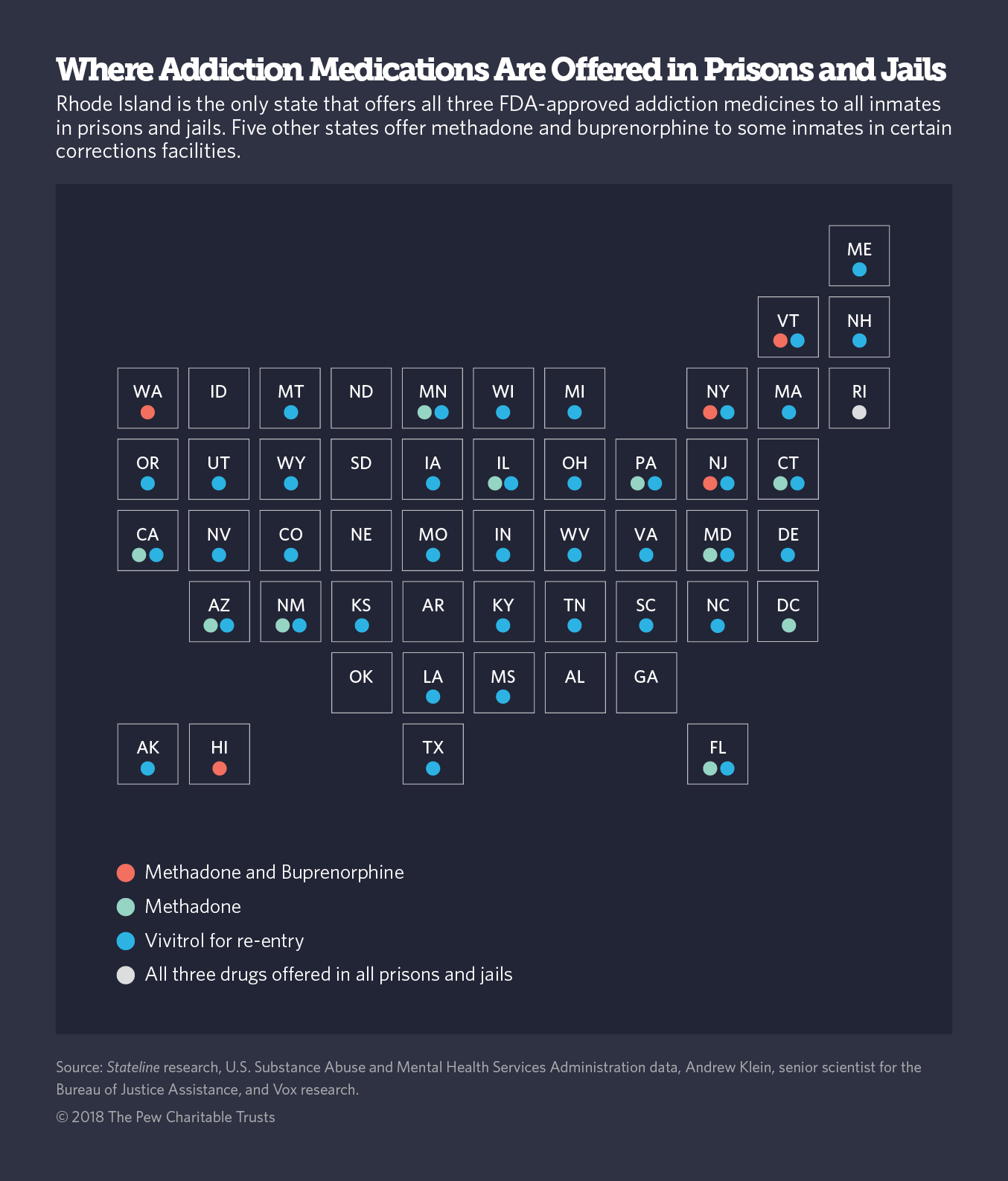 At least 1 in 5 incarcerated people are imprisoned because of drug charges, but in many states, even more inmates are addicted to heroin and other opioids.

In Connecticut, for example, at least 30 percent of the state’s 14,000 inmates are addicted to opioids, according to Kathleen Maurer, the medical director for the state’s corrections department.

Nationwide, a quarter of heroin addicts pass through the corrections system each year, according to a study in the Journal for Opioid Management.

This presents a huge opportunity to quell the opioid epidemic and prevent thousands of overdose deaths. Cut off from their drug supply, inmates are more likely to opt for addiction medications than people who haven’t been incarcerated, particularly when the medications can help them avoid painful withdrawal symptoms, according to Rich.

In addition, providing the medications and ensuring compliance should be much easier in the controlled environment of prisons and jails, said Dr. Kevin Fiscella, an addiction specialist who advises the National Commission on Correctional Health Care, which accredits prison health programs. “There is no better place to intervene in an individual’s addiction than in corrections.”

Methadone, the oldest and most researched addiction medication, is available in only 22 of the nation’s 3,300 local jails and even fewer of its prisons, according to Klein.

Five states — Hawaii, New Jersey, New York, Vermont and Washington — offer both methadone and buprenorphine to some inmates at one or more prisons or jails. Only Rhode Island offers all three medications to all inmates in all of its prisons and jails.

And in about 200 jails in about 40 states, naltrexone is offered to inmates who are close to being released, under programs primarily sponsored by its manufacturer, according to Klein.

Under an executive order issued by Democratic Gov. Gina Raimondo in 2016, the state not only continues medications for those who enter incarceration on an addiction drug, but also offers medication to prisoners who, after a substance abuse screening at intake, are deemed to need it. Rhode Island is spending $2 million annually on the program.

According to Traci Green, the lead author of the Rhode Island study and an adjunct professor of epidemiology at Brown University, “The great hope is that we can take what we’ve learned in prisons and jails and transplant it to other places in the community such as hospital emergency departments, where we’re also touching the lives of people who use drugs.”

“The good news for other states,” she said, “is that what we’ve done here is entirely replicable.”