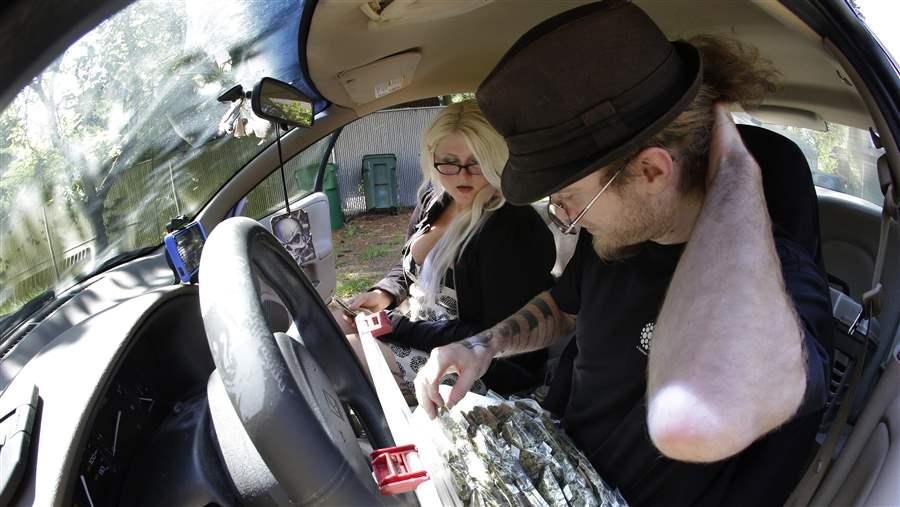 Michael “Billy the Kid” Kenworthy, a marijuana delivery driver in Seattle, seals a package of pot for a customer. Marijuana delivery businesses remain illegal in Washington and several other states that have legalized possession and sale of the drug.

It’s been legal to buy small amounts of marijuana in Colorado for over four years. But consumers can’t order buds, edibles or the marijuana concentrate called “shatter” through the mail — that’s illegal under federal law. And they can’t have weed delivered to their doorstep, like a pizza or an order of pad thai.

Lawmakers in Colorado and other states that pioneered recreational marijuana legalization have been reluctant to allow home delivery, even in an era when consumers are used to getting everything from diamond rings to toilet paper delivered.

Skeptics also say launching a risky service could attract unwanted federal attention. Denver is concerned that marijuana delivery could cause additional safety issues and draw federal scrutiny, according to a statement from Eric Escudero, communications director for the city’s Department of Excises and Licenses. Earlier this year, U.S. Attorney General Jeff Sessions rescinded Obama-era guidance that had told federal prosecutors not to target marijuana businesses that are licensed and regulated.

Colorado legislators last year rejected language in a bill that would have legalized marijuana delivery. Now they’re considering a pilot program instead. Democratic state Rep. Jonathan Singer, a sponsor of both bills, said the earlier proposal failed because it went too far, too fast, for some of his colleagues. The current bill is “a slow step in the right direction,” he said.

Colorado, Washington state, Alaska and Washington, D.C., don’t allow home delivery of marijuana. Oregon, California and Nevada do, but services are not universal. In Oregon, state data shows that close to two-thirds of counties have a dispensary licensed to make recreational marijuana deliveries. In California, marijuana industry advocates say that less than a third of cities and counties in the state allow retail marijuana sales, which could include home delivery.

But illegal and quasi-legal delivery businesses are widespread regardless of the law.

Washington, D.C., for instance, allows cannabis possession but not sales. So businesses, including delivery companies, are selling overpriced stickers, cookies, and cold-pressed juice with a gift of cannabis thrown in. “At Juiced, we make sure that all our products make an impact that will enhance your spirit and your mood:),” says one such company’s website, with a coy smiley face emoji.

“That notion of having a delivery person go around house to house and dropping off potentially significant amounts of marijuana — any amount of marijuana — I think we look at that as just a hazard,” Hickenlooper told the Cannabist, a website of the Denver Post, last spring when the Legislature was considering legalizing home delivery statewide.

“And if we’re really serious about keeping marijuana out of the hands of teenagers,” he said, “delivery service offers more opportunity for that marijuana to get into the hands of kids.”

Home delivery could also bring marijuana sales into counties that don’t allow such sales, said Eric Bergman, policy director at Colorado Counties Inc., a membership association for county officials. More than half of the state’s counties prohibit marijuana businesses within their jurisdiction, according to state data. Some cities within those counties’ borders do allow marijuana businesses to operate.

Marijuana businesses, meanwhile, are lobbying for a change in the law. Advocates for a San Francisco-based marijuana delivery startup called Eaze, which some have called “Uber for weed,” have told Colorado lawmakers that technology can help allay some of their concerns.

For instance, the Eaze app blocks orders to places where delivery isn’t allowed. “Eaze has a whole team of people that monitors, is it legal in that city? Is it legal in that ZIP code?” said Elizabeth Conway, principal at Gide LLC, a firm that lobbies for cannabis and tech companies. 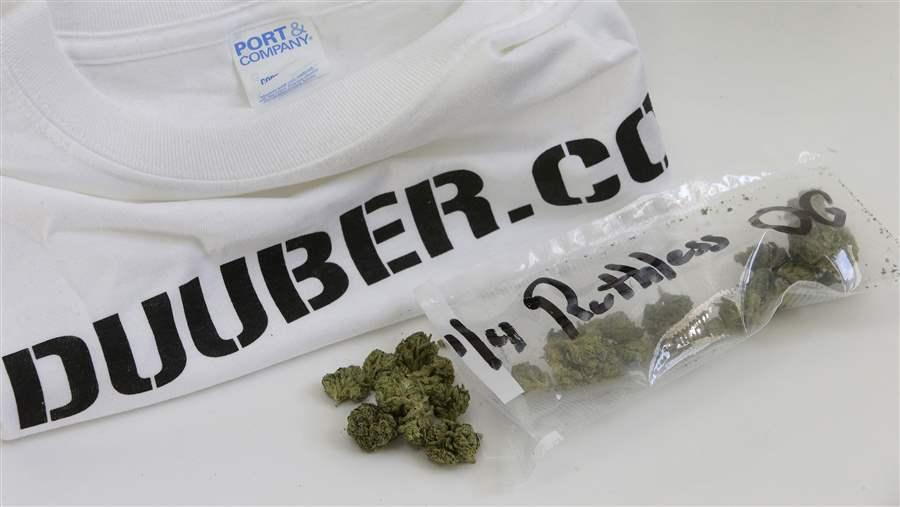 Marijuana and a T-shirt from Massachusetts pot delivery company Duuber.com. Companies like Duuber exploit loopholes in state law that allow people to give away or “gift” up to an ounce of marijuana. The Duuber T-shirt cost $100 but the marijuana was a gift.

States that do allow marijuana home delivery don’t allow just anyone to drive around with weed for sale. Oregon’s rules address when pot can be delivered (8 a.m. to 9 p.m.), where (only houses and apartments in the locality where the retailer is licensed), how often (one delivery per person per day), and to whom (adults over 21), for instance. Drivers can’t take more than $3,000 worth of weed products “out for delivery” at one time.

California’s long list of rules includes a requirement that delivery vehicles be outfitted with a GPS tracking system and prohibits “unmanned vehicles” such as autonomous cars from delivering weed.

Cities and counties in both states can opt out of allowing delivery or set more stringent rules, adding further complication.

“The concern is that there will be a race to the bottom,” he said, where delivery businesses will “locate in the area with the most lax regulations and then deliver all over the county.”

For businesses, the biggest concern isn’t what they need to do to get licensed but whether localities will allow them to operate at all, said Max Mikalonis, legislative advocate for the California Cannabis Delivery Association. “There are huge swaths of the state that cannot legally be delivered to.”

Mikalonis is among the lobbyists pushing for a state Senate bill that would stop localities from banning marijuana delivery services. Right now, it can take hours for business owners to figure out, city by city, what addresses they’re allowed to serve, he said, adding that allowing delivery would help medical marijuana patients and bolster the legal market.

In recent years several California marijuana delivery drivers have been robbed, some at gunpoint. Such incidents have been cited by Colorado law enforcement groups in their arguments against allowing delivery services there.

Sgt. David Woolsey, who works for the division of marijuana control at the San Jose Police Department, said that since the city began allowing marijuana home delivery last year, there’s only been one such incident, a burglary of a delivery driver’s car (the driver was not hurt). Robberies and homicides that involve black market delivery businesses are probably more common, he said, but it’s hard to say for sure because the black market is hard to track.

Nine businesses in the San Jose area are currently licensed and offering delivery, he said. “The problem is there are 35 or 40 illegal delivery services active in our area.” Some unlicensed businesses have their own websites, others post to Craigslist, Facebook and other social media sites, he said.

It’s difficult for law enforcement to track down illegal businesses that advertise online, Woolsey said, because they often don’t have an obvious location.

He said city officials decided to allow home delivery because they wanted to push consumers to buy their weed legally. The legal market is governed by rules and regulations that keep consumers, employees and businesses safe, he said.

Consumers can be blissfully unaware that “legal marijuana” doesn’t mean all methods of purchase, anywhere, are allowed, officials and industry insiders say. Both Nicchitta and Woolsey said their teams want to help consumers better identify which cannabis businesses are legal.

In Nevada, Ben Sillitoe, CEO of Oasis Cannabis, a licensed dispensary close to the Las Vegas Strip, said his employees have been making regular deliveries of cannabis since 2016 with few hiccups. Fifteen percent of the store’s cannabis sales come from deliveries, he said.

“We’ve had issues where children have tried to order delivery — we’ve been able to catch that,” he said. Oasis staff members review the purchasers’ identification to make sure they are over 21 before handing over the pot.

He said that he needs to be able to offer delivery to stay competitive.