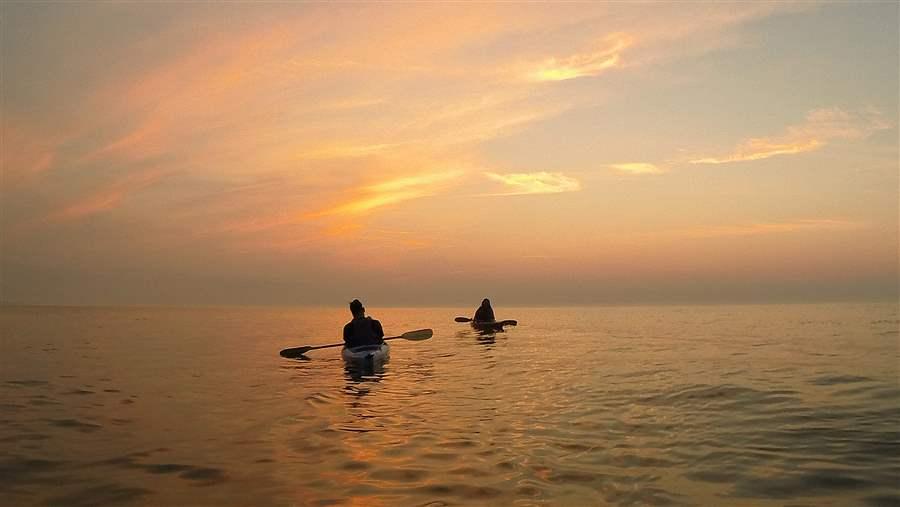 Kayakers paddle on Lake Michigan. A proposed Foxconn electronics plant in Wisconsin would drain 7 million gallons a day from the lake, but other Great Lakes states say the arrangement conflicts with a 2008 water usage agreement.

Editor's Note: This story was updated April 9 to remove an incorrect reference to Illinois not seeking a deal with Foxconn. The state was one of several that completed for the plant.

The approval of a new factory just outside the Great Lakes Basin could mark the beginning of a manufacturing revitalization that relies on draining millions of gallons of water from the lakes.

It’s what Wisconsin’s government hopes for — and environmentalists fear.

If given the go-ahead by Wisconsin’s Department of Natural Resources, electronics manufacturer Foxconn Technology Group, which is based in Taiwan, would make liquid crystal displays, more commonly known as LCDs, in a factory just outside Racine, Wisconsin.

Wisconsin courted Foxconn hard. The state offered $3 billion in incentives and exempted the plant from the state’s wetlands regulations and an environmental impact review. In luring Foxconn, Wisconsin beat out many of its Great Lakes neighbors — Michigan, Illinois, Indiana, Ohio and Pennsylvania also vied for the plant.

The company has pledged to hire 3,000 people in Republican House Speaker Paul Ryan’s district in a largely rural part of the state with a struggling economy. But the company needs more than just a wealth of manufacturing workers. Making LCD panels also requires large volumes of clean water: The plant is seeking approval through Racine’s water utility to drain 7 million gallons a day from Lake Michigan.

But other Great Lakes states are questioning the legality of the deal, and some environmentalists say it could create a slippery slope that will allow other outside interests to tap into lakes.

Environmentalists object to Wisconsin leaders allowing Foxconn to skirt some environmental regulations, and they worry Racine’s wastewater treatment center won’t be able to treat all the pollution from the plant before releasing the water back into Lake Michigan.

Perhaps the biggest question, however, is whether the deal violates the Great Lakes Compact, a 2008 deal signed between the eight Great Lakes states and whose governing body includes Ontario and Quebec. The agreement aims to keep Great Lakes water from being diverted to areas far beyond the Great Lakes Basin, but it also requires that any water that is diverted be used to serve mainly the public, not industry.

“There had been musings in years past done by water-thirsty states out West that the way to solve the water problem is to build pipelines to Lake Superior,” said Bill Davis, executive director of the Wisconsin chapter of the Sierra Club, which is opposed to the Foxconn project. “If you undermine the compact, you potentially lose the ability to prevent things like that from happening.”

The Foxconn plant is set to be built in Mount Pleasant near Racine, not far from the Great Lakes Basin. Racine is requesting 7 million gallons of lake water a day, of which 6 million would go to the plant and 1 million would go to other commercial and industrial users. That’s not enough water to trigger a review by the rest of the Great Lakes states in the compact, under which one state’s “nay” would be enough to veto the project.

Instead, it’s up to Wisconsin’s natural resources agency to make sure the proposal meets the compact’s standards when it comes to diverting water. The agency hopes to decide on the project by the end of May.

Officials from New York and Illinois questioned aspects of the deal during the proposal’s comment period, which concluded earlier this month.

A letter from New York’s Department of Environmental Conservation quoted the compact’s requirement that water diverted to nearby communities largely serve residential customers.

“Here, it is unclear that the proposed diversion is largely for residential customers,” the letter said. “The water is intended to facilitate the construction and operation of the future industrial site.”

New York also questioned whether Wisconsin could unilaterally approve the deal, saying the compact’s general prohibition of new diversions “favors and potentially mandates” review by the other states bordering the lakes.

A letter from the Illinois Attorney General’s Office said the utilities involved in the project haven’t made clear how they would treat wastewater from the Foxconn plant before ultimately releasing it back into Lake Michigan. They argue that Racine should not be able to exceed the amounts defined in its current permit for returning wastewater to the lake.

Republican Wisconsin Gov. Scott Walker’s office referred questions about whether the Foxconn project comports with the Great Lakes Compact to the state environmental agency. A spokesman for the agency would not comment on the Foxconn project while its regulatory review is underway. 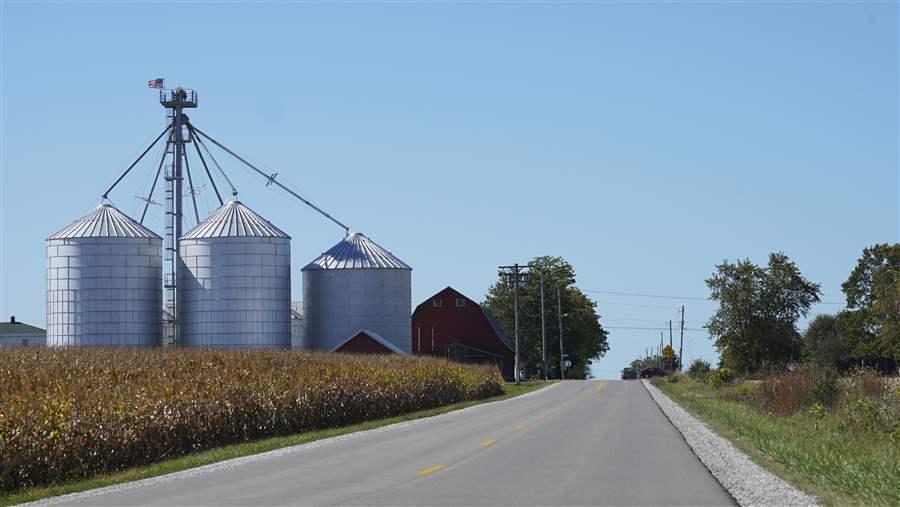 Farmland in Mount Pleasant, Wisconsin, where the electronics company Foxconn intends to build its new plant.

Keith Haas, general manager of Racine’s water utility, said the Foxconn project pales in comparison to the more than 700 million gallons of Lake Michigan water Chicago uses every day. He said much of the area’s current population was drawn there to work at factories that have since closed.

“Because of the industry decline of last 20, 30 years, we have lots of capacity to meet the demands of future development,” he said. “This just gives us an industry that doesn’t exist right now, and maybe some people could go and work at this industrial place.”

Haas said once the project is approved, Foxconn and the utility will begin the process for determining how to deal with wastewater, following the typical timeline of applying for permits a few months before opening. As for concerns of pipelines whisking water away to Iowa or Montana, he thinks those fears are overblown.

Foxconn declined a request for an interview but said in a statement that “environmental sustainability is a priority and that includes compliance with the Great Lakes Compact and Wisconsin’s laws, rules and permitting procedures relating to water quality and wastewater treatment.” Under the deal with Wisconsin, the company is required to create 2 acres of wetlands for each one it destroys, more than the typical 1.2 acres required by law.

Other diversion projects have spurred controversy in the past — but those were proposals to use lake water to serve largely residential consumers.

When Waukesha, a town of 72,000 about 20 miles from Milwaukee, wanted to tap into Lake Michigan because its own water supply was contaminated with radium, a naturally occurring radioactive element, the diversion was significantly scaled back after objections from other states in the region.

“There’s an argument that this is not public infrastructure,” said Jim Olson, an environmental lawyer in Michigan who has spoken out against the Foxconn deal. Olson worries it will open the door to similar projects that, when combined, will slowly drain the basin. “The Great Lakes are an important but exhaustible resource. … If you interpret the exceptions to the diversion ban too broadly, you have to treat anyone else that comes along in a somewhat equal manner.”

Environmentalists have also questioned Foxconn’s planning skills: If the company had proposed to build its plant just a little farther east, it would be entirely in the basin and require no review at all. Still, many expect the project will be approved.

“It’s kind of obvious to some of us that if they built it 2,000 feet to the east there’d be no problem,” Haas said. “But we don’t tell people what to do.”