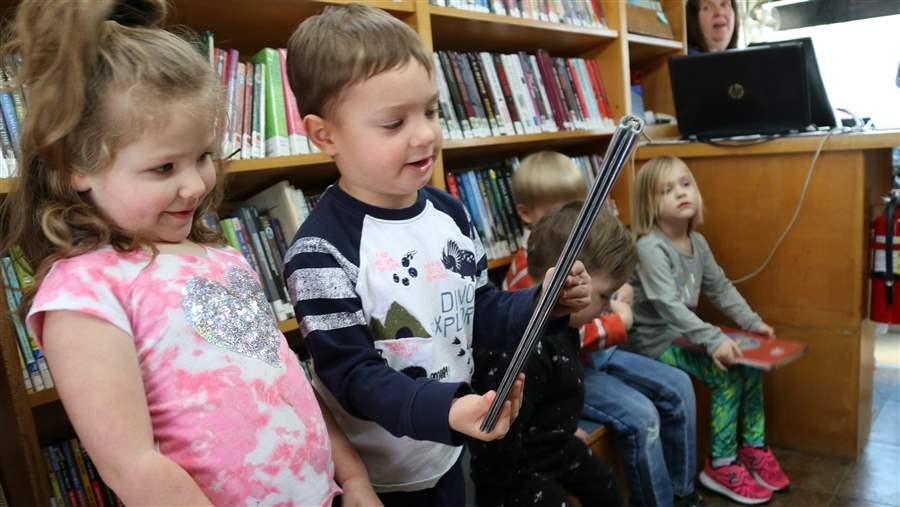 Children pick out books on the Graves County bookmobile as the librarian, Sandra Hennessee, looks on.

MAYFIELD, Ky. — The van comes to a stop just as it reaches the hens. A bleating lamb is the first to greet Sandra Hennessee as she opens the van door and lets in the midday sun.

To get here, on an Amish farm in rural western Kentucky, Hennessee headed west from the small town of Mayfield and drove for miles on a two-lane road, passing churches, farms and open fields. With every bend and bump in the road, the wooden shelves inside the 27-year-old van creaked. With every stop, the hundreds of plastic-wrapped and paperback books on the shelves shifted.

Now on the farm, a woman dressed in a floor-length blue skirt, a black jacket, boots and a bonnet climbs inside. “Hi, honey,” Hennessee says. “What can I help you find?”

As the Graves County Public Library bookmobile librarian, Hennessee says she serves some of the most isolated areas of her community. She delivers books to some of the loneliest widows and some of the poorest children, but, according to her, “it’s not really about the books.”

Hennessee, 51, started doing this job in 1995, when bookmobiles — miniature, mobile libraries in the backs of walk-on vans — were in their heyday. At the time, there were nearly 1,000 operating across the United States. Now, there are fewer than 650, according to the most recent data from the Institute of Museum and Library Services, a grantmaking and research arm of the federal government. 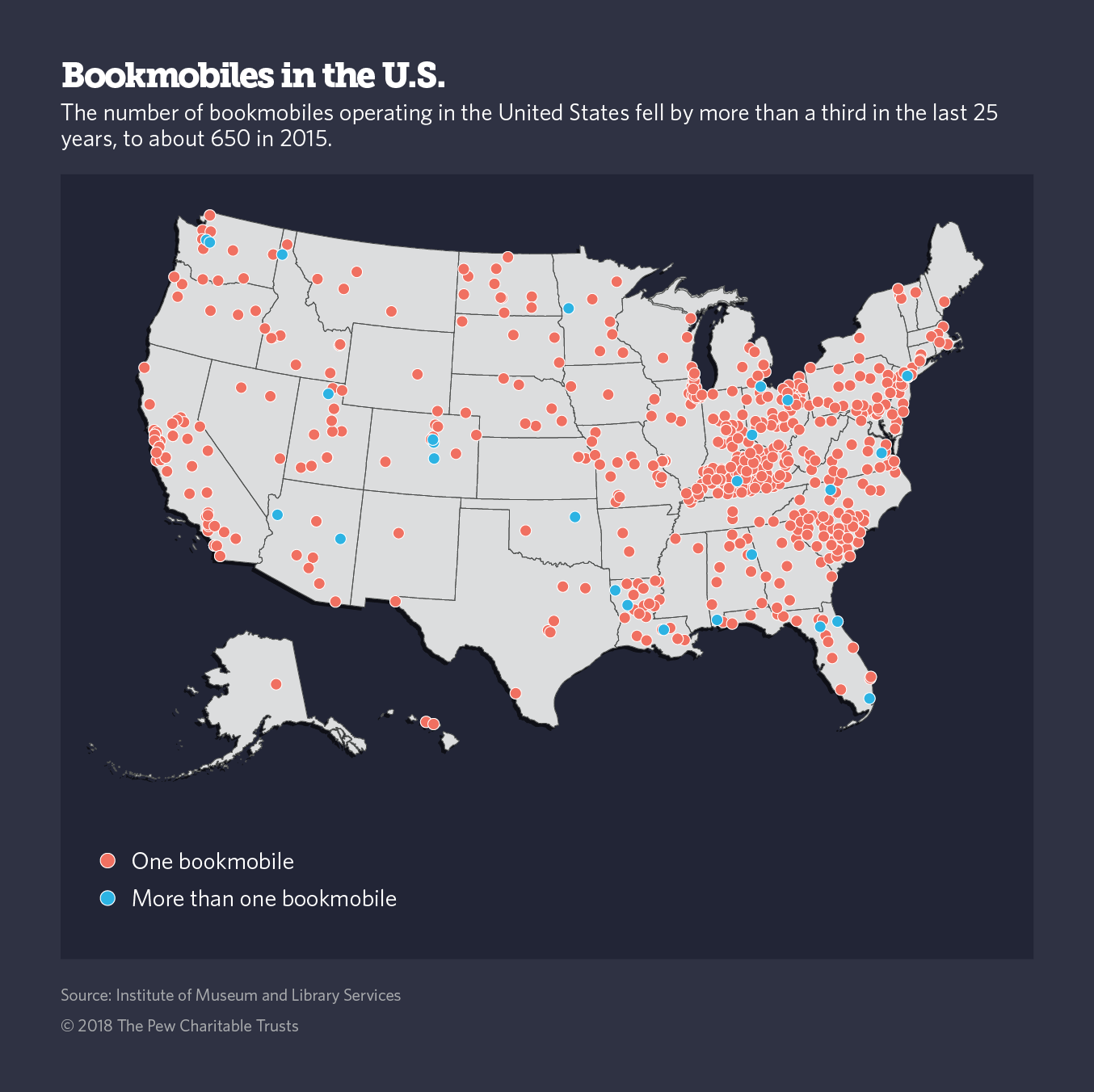 Despite the decline, librarians say their services remain vital, especially in rural areas, where people often live far from their library branch and have limited internet access. Bookmobiles help close this gap by creating a traveling branch, said Michael Swendrowski, a board member of the Association of Bookmobile and Outreach Services and owner of Specialty Vehicle Services, which helps libraries design bookmobiles.

“There are tons of populations that don’t have access, who can’t get to the library, can’t get the internet,” he said. “Bookmobiles and outreach services are key to serving those people.”

Kentucky has 75 bookmobiles, the most of any state. In Graves County, Hennessee stops at day care centers and schools, bringing books to low-income children whose parents may not have time to stop by the library. She stops at nursing homes, whose residents may not be able to drive. And as access to high-speed internet becomes increasingly essential, she connects residents in remote areas to broadband through the bookmobile’s hotspot.

Most importantly, Hennessee says, is the sense of community and friendship she brings to every stop.

“Some of them, I’m the only person they talk to, or see,” she said. 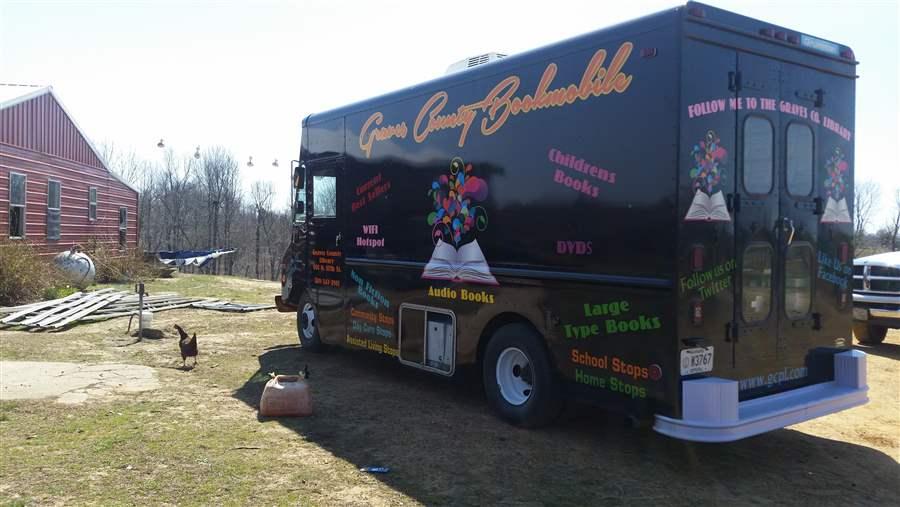 A hen struts near a bookmobile on an Amish farm in western Kentucky, one of the many rural stops on the library’s route.

While the number of bookmobiles has been dropping, librarians say that in some places interest is picking up as libraries look for ways to reach more patrons and prove their worth during tight budget years, and as people become more accustomed to having goods and services delivered to their doors.

This is true in urban and rural areas. King County, Washington, which includes Seattle, added most of its 16 mobile service vehicles, including bookmobiles and mobile computer labs, in the past decade, said Christine Anderson, the county library system’s outreach services coordinator. Other counties — in Oklahoma, New York, Louisiana and Virginia — have added more than one bookmobile in that time as well, according to a Stateline analysis of the institute’s data.

The King County library system gets a couple inquiries a month from librarians and others interested in getting their own bookmobiles, Anderson said.

“I get the sense there is a renaissance of bookmobile service,” she said.

Early on a recent crisp and sunny morning, Hennessee climbed into the 18-foot-long box van and tried to start the generator. It didn’t work. Her next try did. The 1991 Chevrolet van has seen better days. In 2014, it got a new engine and a fresh coat of black paint, but, she said, it still has problems.

Her first stop was on the edge of Mayfield at a day care center called the Kidstruction Zone. As she pulled into the driveway, the excited 4- and 5-year-olds’ faces appeared in the window on the day care center door. Soon, the children bounded toward the van — the first of two groups who would climb aboard.

This is what Hennessee calls her “bunches, bunches and more bunches.” She makes several stops at day care centers and schools, visiting each about twice a month. “I love my young’uns,” she said.

The preschoolers’ chatter filled the small space in the back of the van. A few children at a time climbed onto a step along the bookshelf to study the books. A small boy reached for one with a bus on the cover, called “Bus! Stop!” A girl chose a book of scary stories because, she said, it looked like Halloween. “A Christmas book again?” Hennessee asked another girl. “Oh yes, we love our Christmas stories.”

The preschoolers fit their tiny feet into footprint stickers on the floor, where they waited to check out their books. The children swap books with each other so they can have fresh reading material every night, said Nichole Gibson, director of the day care center. This helps encourage parents to read to their children, she said, when some may not make it a priority.

Like most rural areas in America, Graves County is a bit less educated and a bit poorer than the U.S. average. Most of the 37,000 county residents live outside of the county seat here in Mayfield, population 10,000. Many county residents work in manufacturing, or agriculture. After long workdays, Hennessee said, not many people here are interested in reading books other than the Bible.

About 32 percent of rural Americans said they hadn’t read a book in the past year, compared with about 23 percent of urban Americans, according to a 2016 Pew Research Center survey. (The Pew Charitable Trusts funds both the Center and Stateline.)

This may be, in part, due to lack of access to books. Nearly 1 in 5 people who live in non-metro areas live more than six miles from a public library, according to a recent study by Frank Donnelly, a geospatial data librarian at Baruch College at the City University of New York.

About 18 percent of bookmobiles operated in a rural area in 2015, according to a Stateline analysis of the Institute of Museum and Library Services data. And more are starting up. The rural library system of Summers County, West Virginia, last summer received $35,000 to buy a new bookmobile, in the form of a grant from the U.S. Department of Agriculture’s rural development program. The New Mexico State Library bought two new bookmobiles last month to serve rural areas.

Leaving the day care center, Hennessee drives the bookmobile past a yellow sign with a black horse and buggy. “All right, we’re leaving civilization as we know it,” she says. A few Amish families are next on her stops.

Graves County is so expansive — one of the largest counties in the state — that Hennessee ends up driving about 500 to 700 miles a month. She’s racked up most of the 191,356 miles on the van over several years. Others have trouble driving the long van, she said, but to her, “it’s like an appendage.”

Just before lunch, she pulls in front of the house of Katie Wooley, a retired teacher who isn’t Amish but lives in the area, and starts scanning the shelves for books to take to her. “She likes cozy mysteries,” she said, pulling a book called “Banana Cream Pie Murder.” Hennessee opens the front cover and, when she sees the initials “KW,” puts it back. Her patrons often mark their books so they can remember what they’ve already read.

Wooley invites Hennessee in. “You caught me without my clothes on,” she says, dressed in a pink nightgown and slippers. She sits back in a burgundy recliner and Hennessee takes a wooden rocking chair. “So, what’s new in your neighborhood?” Hennessee asks her.

In Graves County, Hennessee waves to other drivers as they pass. It took her a long time to build up relationships around town, she said, especially with the Amish families, who were hesitant to speak to her at first.

About a quarter of the library books that get checked out in the county are from the bookmobile. Last year, Hennessee averaged about 1,600 books a month.

The bookmobile is costing the county more as it ages, said Deana Gschwind, Graves County’s library director. But it’s such a staple, she said, and it fulfills such a need, it’s worth it.

Like all library services, the funding for bookmobiles across the country becomes threatened when budgets are tight, said Swendrowski, with the bookmobile association.

In Kentucky, Gov. Matt Bevin, a Republican, has proposed cutting all funds for local library operations from the state budget. Last year, the state gave about $2.5 million to local libraries, which was split among the 118 library districts in the state, said Dave Schroeder, advocacy chair for the Kentucky Public Library Association.

This won’t have a large impact on the Graves County library, or most libraries in the state, Schroeder said, because they receive most of their funding from local sources. But at least three library systems may close if the cuts happen, Schroeder said. The Legislature is still finalizing the budget.

Hennessee said she doesn’t cost the county much. Last year, she made about $29,000. But, most days, she considers it more fun than work.

On the Amish farm, with the hens and the lamb, the woman climbs on board, followed by three of her children. “I’ve got a request,” she says. “Any books on vegetable gardening?”

“I’ll take a look,” Hennessee says. “I got some gardening I just put on here a few days ago.”

Hennessee often spends time with the Amish children doing crafts, like painting and building birdhouses. She has an idea for the spring, but wants to run it by their mother first. “We’re gonna make kites,” Hennessee says. “Can you all fly kites?” “Oh, yeah,” the woman responds.

For today, she has a smaller craft in mind. “Come on, kiddos,” she says, handing them each a plastic baggie with foam paper that can be tacked together into a tiger. Hennessee says she doesn’t try to be educational — that’s for school.

“I try to instill that love of reading,” Hennessee said. “Not, ‘you have to read.’ And if you like to read, you’ll be a lifelong reader.”

After she has made all her stops for the day, she pulls off on the side of the road, grabs the broom on the van, and sweeps out clumps of dried mud. Next, she’s headed to an Amish Tupperware party.

“Technically, this is not part of my job,” she said a few minutes later, steering the van up the dirt driveway. “Sometimes, you just have to be fluid and cool that way. I guess, in a sense, it’s just being part of the community.”