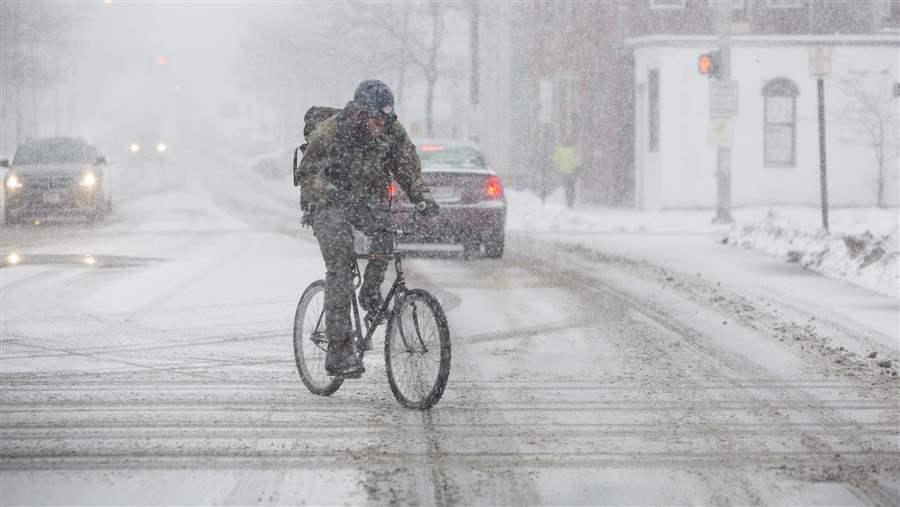 A bicyclist crosses the street in Portland, Maine, this month as heavy snow begins to fall. Several states are considering bills that would allow bicyclists to treat red lights as stop signs and stop signs as yield signs.

Ever see a bicyclist roll through a stop sign after slowing down at an intersection? Or ride through a red light after stopping and yielding? It’s called the “Idaho stop,” and until recently only one state allowed it: Idaho.

But that’s changing. In October, Delaware became the second state to make it legal for cyclists to yield instead of stopping at stop signs on some roads. Some are calling it the “Delaware yield.” And several other states are considering Idaho-stop-type legislation.

The practice is controversial, said Douglas Shinkle, transportation program director for the National Conference of State Legislatures (NCSL). “There’s a perception among some people that this is giving special rights to bicyclists and legalizing an unsafe behavior.”

Many bicycle advocates see the Idaho stop as codifying what they already do at stop signs. They say it’s easier to slow down and yield at each sign than to stop and restart, regaining momentum over and over, and slowing traffic. And some say it’s better to get out in front of traffic at red-light intersections to avoid being “right hooked” — sideswiped by a car in the next lane that turns into theirs.

“There’s the misperception out there that these laws will make it legal for bicyclists to blow through intersections,” said Ken McLeod, policy director for the League of American Bicyclists, a national bicycling advocacy group based in Washington, D.C. “That’s not the intent. If someone did that, they would still be cited.”

Opponents, including some police and traffic safety groups, view the Idaho stop as an unsafe practice that could increase the risk of crashes. They say it gives cyclists an unfair advantage over motorists and can create confusion for drivers and law enforcement.

“We believe that bicycles on the roads should follow the same traffic safety laws as motor vehicles. One road, one rule,” said John Moreno, spokesman for AAA Northern California, Nevada and Utah. “There’s a reason there’s a stop sign there. Planners put it there because of traffic safety reasons.”

The bipartisan Colorado bill, which passed the Senate last month and is in a House committee, would provide standard language for cities and counties that want to adopt an ordinance allowing the Idaho stop.

In Utah, a bicycling measure that would have allowed cyclists to treat stop signs as yield signs and red lights on one- and two-lane roads as stop signs came close to passing. The House passed it by a 58-11 vote in February. And it cleared the Senate transportation committee this month, but the session ended before it could reach the floor for a vote.

“It would have just normalized the current practice,” said Utah Democratic state Rep. Carol Spackman Moss, the bill’s sponsor, who plans to reintroduce the measure next year. “Most cyclists are really responsible, and they don’t want to be at odds with law enforcement or motorists.”

Since 1982, Idaho has allowed bicyclists to treat stop signs as yield signs. In 2005, legislators amended the law to let cyclists proceed through red lights at intersections after they stop, yield and proceed with caution.

While many cyclists favor such laws, not all do. Some think motorists will see it as a special privilege, adding tension between drivers and bicyclists.

Opponents such as the California AAA clubs point to the lack of independent, comprehensive research as one reason why they can’t get behind such laws.

“We haven’t seen any compelling statistical evidence to show that this would actually make the roads safer,” said AAA’s Moreno, whose club lobbied against the California bill.

Moreno said intersections already can be dangerous for cyclists, and allowing Idaho stop laws could make it worse. He points to a federal report that found 28 percent of bicycle fatalities occurred at intersections in 2015.

Shinkle, with NCSL, said more research is needed to determine how Idaho stop laws impact both safety and mobility. What is known is that many bicyclists don’t fully stop at stop signs. A 2016 DePaul University study in Chicago, for example, found that only about 1 in 25 complied with the law to come to a complete stop.

Cyclists say it also can be frustrating when they’re stopped at a red light and there is no other vehicle next to them. They often wait a long time because their bike doesn’t trigger underground road sensors that tell traffic signals to turn the light green.

More than a dozen states now allow cyclists to proceed through a red light, usually after waiting a certain amount of time, if the signal is broken or sensors fail to detect them, according to the League of American Bicyclists.

The league’s McLeod said his group doesn’t have an official position on Idaho stop laws, but it did back Bike Utah in its efforts to pass legislation this year. “We support state and local experimentation,” he said. “It can be a good thing, if done appropriately.”

The legislation, which includes other bike-friendly provisions, allows bicyclists to treat stop signs as yield signs on one- and two-lane streets. Advocates dubbed it the “Delaware yield.”

Bike Delaware, an advocacy group, lobbied heavily for the bill and collaborated with the Delaware State Police on the language before it was introduced.

That’s what made the difference, said James Wilson, the group’s executive director. “It was essential to have the state police on board,” he said. “It’s a recipe for disaster to have the police opposed to it.”

As part of the negotiations, the advocacy group agreed to a four-year sunset provision as well as eliminating red-light signals from the bill.

“We want to be law-abiding,” Wilson said. “But there’s no need, unless there is really heavy traffic, for bicycles to come to a complete stop at stop signs. None of us ride that way. And it’s not good for cyclists to go out every day and break the law three dozen times.”