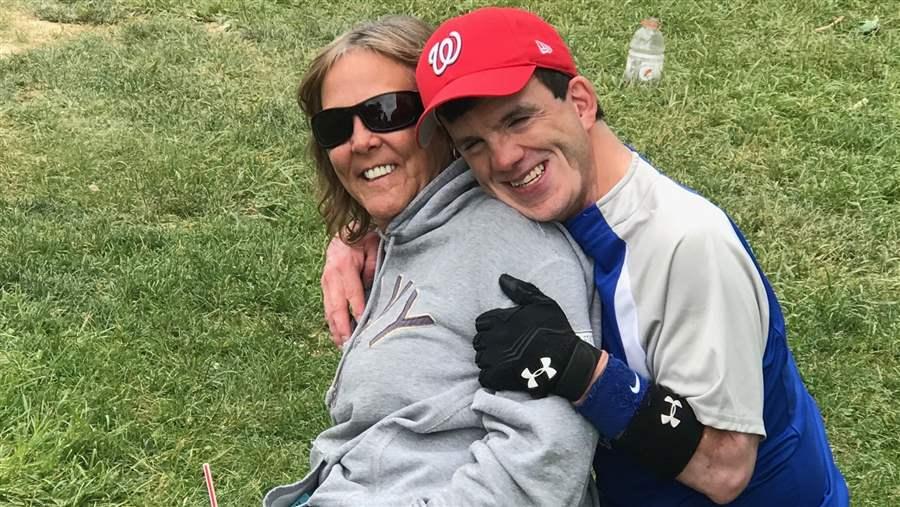 Kim Ruszala says her stepmother has restricted her visits with her younger brother Chris Asher. Eleven states now provide a legal remedy for relatives who have been barred from visiting their ailing family members.

Editor’s note: An earlier version of this story said the Maryland House voted 137-1 to pass the visitation bill. The vote against was switched, making it a unanimous vote in favor.

Toby Davidow was always tight with her mother, Elaine, a part-time nursery school teacher who was “a very kind, nurturing mother and was very optimistic,” according to her daughter. Elaine and Dennis, Toby’s father, were single-minded in their devotion to their only child.

All of which makes the story of their relationship during the last years of Elaine Davidow’s life so surprising.

Toby Davidow, a program coordinator in the student affairs office at George Washington University in Washington, D.C., lays the blame on her parents’ live-in caregiver, 58-year-old Ann Fry. With Toby’s father’s cooperation, Fry barred Toby and the rest of her family, including Elaine’s only surviving sister, from seeing or speaking to her for the last three years of her life, from late 2014 until her death in October, at age 72.

Toby Davidow said she didn’t even know that for the last three months of her life, her mother, who had multiple sclerosis and dementia, was in hospice care, first in her Cherry Hill, New Jersey, home and then in a nearby facility.

Nobody bothered to tell her or other relatives that her mother had died until a week later. By then, Elaine Davidow had been cremated, against the wishes she had expressed before her cognition began failing, according to her daughter.

The events over the past years have devastated Davidow.

“Especially in the later years, Mom and Dad would travel down to my home in Virginia every 6 to 8 weeks from New Jersey, so that Mom and I could go to the spa together,” she recalled in an email. “We’d both get manicures and pedicures done together, giggle over magazines, and share stories. Mom really loved those visits, so much so that I even got a two-bedroom apartment so that my parents had a place to stay when they visited.”

Experiences like Davidow’s have prompted at least 11 states to enact laws that would provide a legal remedy, besides seeking guardianship, which can be costly and complicated, for relatives who have been prevented from seeing infirm or disabled family members.

Under the laws, relatives can seek a court order permitting visitation and communication. The order must be granted, unless the ailing relative is found to be mentally competent and objects to contact. 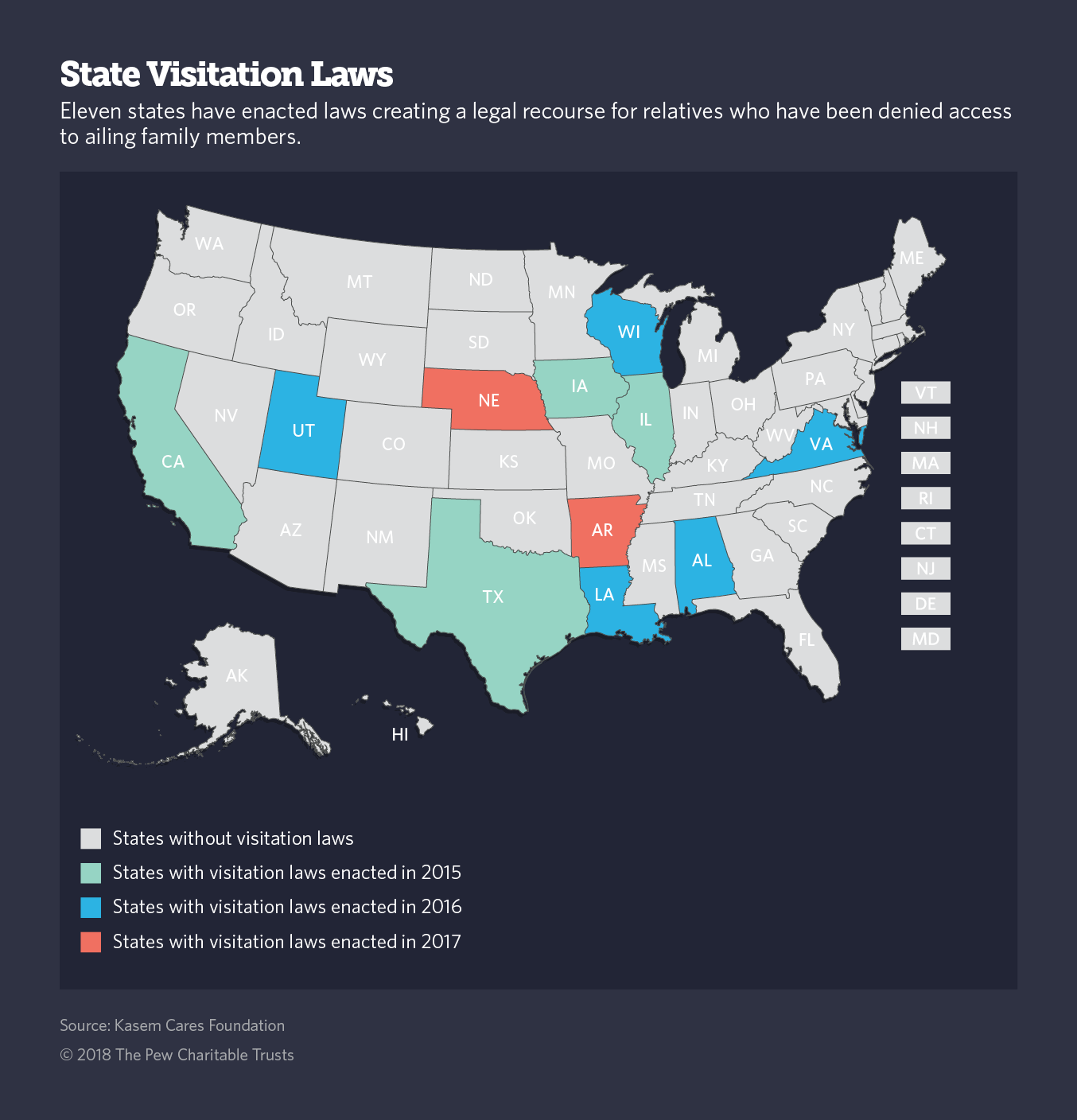 The Maryland House this month passed a visitation bill unanimously, sending it to the Senate. The vote came a few weeks after the children of a trio of celebrities appeared before a House committee to recount experiences similar to Davidow’s.

They were led by a daughter of the late disc jockey Casey Kasem. Through public appearances and her foundation, Kasem Cares, Kerri Kasem has spearheaded largely successful efforts to enact visitation laws throughout the country. Her father, creator and host of radio’s “American Top 40,” a countdown of popular hits, died in 2014 at 82, kicking off a round of wrongful death claims and counterclaims between his widow and his children. Before his death, there had been highly publicized legal squabbles about his guardianship.

Joining Kasem in Annapolis were Travis Campbell, son of the country music legend Glen Campbell, who died at age 81 last summer of complications from Alzheimer’s disease, and Kelly Rooney, the eldest of Mickey Rooney’s eight children. Rooney, the movie star whose career spanned nine decades, died at age 93 in 2014.

Davidow joined them to testify about efforts by stepparents or caregivers to keep them from seeing or communicating with ailing parents or siblings with disabilities.

“He was in a guardianship for the last 18 months, and we never saw him again,” Kelly Rooney said in an interview. At age 90, Mickey Rooney appeared before a U.S. Senate committee and claimed he had been a victim of physical, emotional and financial abuse at the hands of his eighth and last wife and her adult children. His conservator, another term for “guardian,” continued to keep her father from his biological children until his death, Kelly Rooney said.

Travis Campbell also was denied visits with his father. He only found out through media reports that his father, who lived in California, had been transferred to an Alzheimer’s facility in Tennessee. Once he found out, he said, his stepmother still severely curtailed his ability to spend time with his father, whose most famous songs included “By the Time I Get to Phoenix” and “Wichita Lineman.”

“If there had been a law in effect,” Campbell said, “I would have had the most precious gift of all — time with my father.”

In Maryland, the visitation bill has not attracted a great deal of opposition. But Ria Rochvarg, a Maryland attorney who practices guardianship law, testified against it.

“I’m not against the idea, but it doesn’t do what supporters say it does,” she said in an interview. The legislation, Rochvarg said, would require another, possibly expensive judicial process involving lawyers.

“I want people to get visitation without a lengthy process and without lawyers,” she said. “This bill doesn’t do that.” 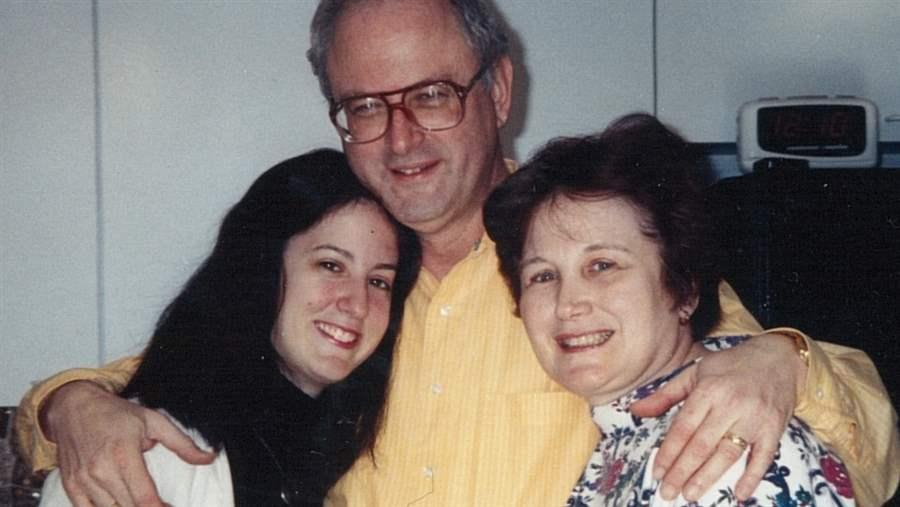 Toby Davidow and her parents. Davidow testified before the Maryland House that her parents’ caregiver and her father kept her from seeing her mother the last three years of her life.

Catherine Seal, the immediate past president of the National Academy of Elder Law Attorneys, said the underlying concern in such cases is that somebody is exerting “undue influence on the senior.”

“One of the classic hallmarks of undue influence is to isolate the person in question by limiting both in-person and phone contact,” said Seal, who practices in Colorado Springs, Colorado. “They convince the person that all these outside people, even family members, are a threat.”

Seal is sympathetic to the intentions behind the new visitation laws, but she prefers her organization’s model guardianship legislation, which would prevent guardians from restricting access to family members the ward wishes to see or communicate with. Critics point out, however, that Seal’s approach doesn’t address the many situations where there is no appointed guardian, or cases in which the caregiver is manipulating the ward into thinking poorly of family members. No state has yet enacted NAELA’s model legislation.

The Maryland bill, like laws that have passed elsewhere, contains provisions beyond visitation. It also would require guardians or caregivers to quickly notify family members when their wards have been hospitalized or when they have died.

Not all of those hoping for passage of the Maryland bill have elderly parents in mind.

Kim Ruszala of New Market, who also testified at the Capitol in Annapolis, has been fighting with her stepmother to gain unfettered access to her 44-year-old brother, Chris Asher, the youngest of her three siblings, who is developmentally delayed. From December 2015 to February 2017, a period after the death of their father, Ruszala said, she wasn’t allowed to see Asher except for a single brief visit at a McDonald’s. The guardianship agreement now permits Ruszala to visit with Asher twice a month.

“I just wanted to see my brother on a regular basis,” Ruszala said in her testimony.

On a recent Friday afternoon, Chris’ stepmother, Constance Asher, brought him to see Ruszala at a Cheesecake Factory in Columbia, Maryland, so the siblings could spend the weekend together. Chris joked happily with Ruszala and her boyfriend, Glenn Weigle, reminiscing about their times together, going camping, thrilling to amusement park rides, and that day he had his face painted for a Baltimore Ravens game.

“The biggest frustration for me,” Ruszala said, is “there’s no avenue to get into the court system to ask for visitation for someone who has a guardian.”

In November, Constance Asher alleged in a court filing that Ruszala’s visits with Asher were "damaging Christopher’s social and emotional well-being.” Asher told the court that Ruszala gave her brother alcohol and cigarettes.

Ruszala told Stateline she allowed Chris to have an occasional beer, as did his father, and that her brother had once stolen a pack of cigarettes from her and smoked one. At the Cheesecake Factory, Chris backed up his sister’s story.

Asher did not respond to several phone and email requests for comment.

If a visitation law had been in place in New Jersey, Davidow might have been able to spend time with her mother. Until the caregiver appeared around 2010, Davidow said, she was also close to her father, a school administrator in New Jersey for 30 years. “We were friends my entire life,” she said.

But he became a man she didn’t recognize, hostile to a daughter he had once showered with affection. He wouldn’t let Davidow in the house and hung up on her when she called. Toby hasn’t seen her father in four years and has spoken to him for about 15 minutes in that time, she said.

She also said that her father and Fry refused to open the door when she came several times to her parents’ home. And she was unable to get her mother on the phone.

In 2013, Fry’s name was added to the deed of a property Dennis and Elaine Davidow owned in Atlantic City. Her father also gave Fry his power of attorney and made her his health proxy.

Davidow said Fry sold her mother’s jewelry, purses and other possessions on eBay.

She said the reason Fry gave for shutting off contact was that she was “mentally unstable and a big stressor to my mom and dad.” Davidow said she has never been diagnosed with a mental illness.

Toby says her father’s behavior is so at odds with their previously warm relationship that she believes he is mentally unfit. But earlier this month, when Davidow attempted to gain guardianship over him, a doctor determined that he was capable of making his own decisions. Davidow fears she has reached a dead end.

“It has been so crushing to come to the realization that I may never see my father again,” she said.