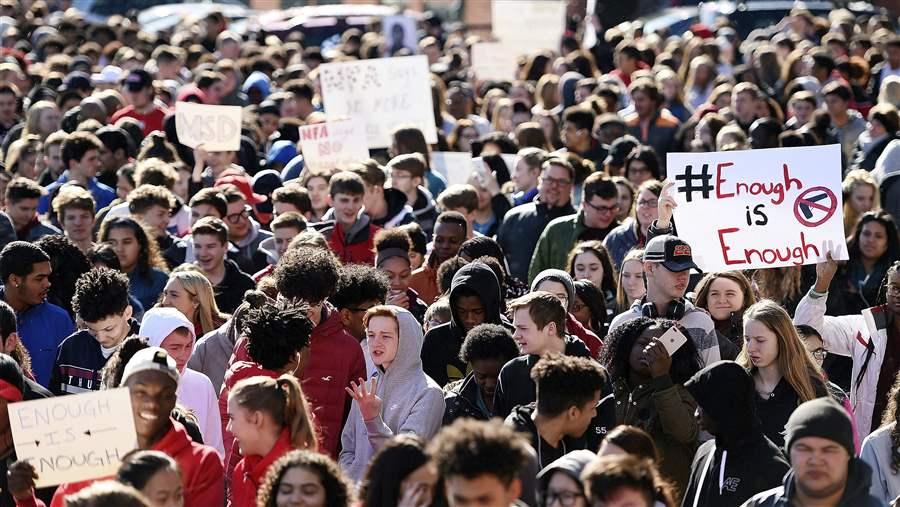 Students at Norwich Free Academy rally for school safety as part of the national school walkout in support of students from Marjory Stoneman Douglas High School last week. Congress is poised to give the CDC explicit permission to resume funding research on gun-related violence.

The spending bill the U.S. House passed Thursday clarifies that the Centers for Disease Control and Prevention can conduct research on gun-related violence, which the health agency has generally avoided since passage of the so-called Dickey amendment in 1996.

The amendment, named after U.S. Rep. Jay Dickey, a Republican from Arkansas, who called himself a “point man” for the National Rifle Association, said that federal money sent to the CDC for the prevention of injuries could be used to “advocate or promote gun control.” It was accompanied by a $2.6 million annual cut in CDC funding, exactly the amount the agency had been spending on gun-related research. (Before his death last year, Dickey renounced the amendment bearing his name.)

The CDC interpreted those twin actions as a prohibition against the agency doing most research related to gun violence, and that has remained the case since the amendment passed.

In testimony before Congress last week, Health and Human Services Secretary Alex Azar seemed to indicate that there was no reason for Congress to issue any kind of statement on gun research. He said he never interpreted the Dickey amendment as restricting gun research. “My understanding is that the rider does not in any way impede our research mission. It is simply about advocacy,” he said.

Still, Democrats hoped that affirmative language from Congress would encourage the CDC to launch more research on gun violence.

A study published in the Journal of the American Medical Association last year found that between 2004 and 2015, research related to gun violence was “substantially underfunded and understudied” compared with other leading causes of death, based on the mortality rates of each. According to the study, research on firearms-related violence received 1.6 percent of the funding ($22 million) that would be predicted ($1.4 billion) based on the number of deaths caused by guns. In 2015, 36,252 were killed by firearms, according to the CDC.