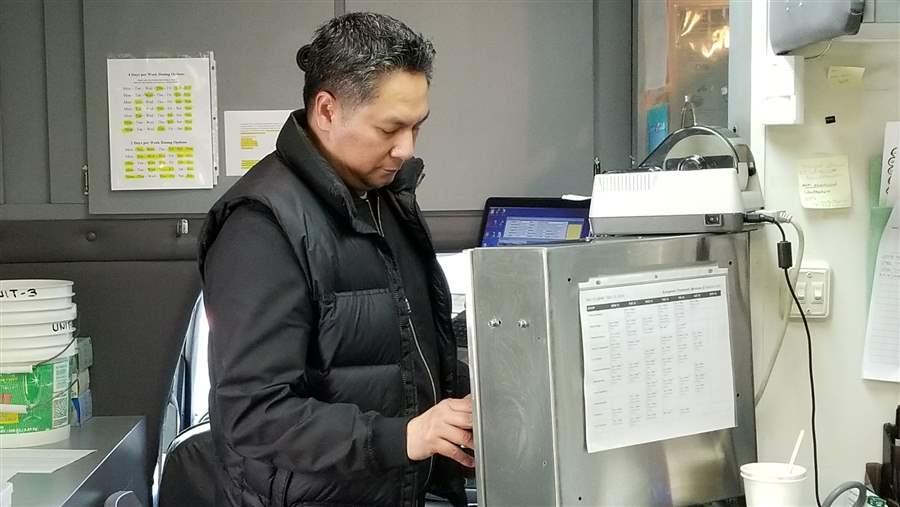 Julius Tiangson, a registered nurse, dosing a patient in a methadone van operated by Evergreen Treatment Services in Seattle. As the opioid epidemic spirals, more treatment centers want to add mobile clinics to their operations to serve more people.

But the U.S. Drug Enforcement Administration, which regulates dispensing of the FDA-approved addiction medicine, has refused to license any new methadone vans since 2007 over concerns about potential diversion of the medication.

Now, in an unrelenting opioid epidemic that is killing more than a hundred Americans every day, some state and local addiction agencies are asking the federal government to lift its moratorium as quickly as possible.

In Seattle and surrounding King County, for example, federal grant money has been set aside to deploy four new mobile methadone vans to provide treatment on demand in addiction hotspots around the city and county. But the project is on hold until the DEA lifts the ban.

“Mobile treatment vans are critical to addressing the opioid epidemic,” said King County behavioral health official Brad Finegood. “As this epidemic grows and changes, concentrations of people who are affected by it can be found in shifting locations within the city and county. If we’re going to be effective, we need to be nimble and bring the medication to them instead of asking everybody to trudge across town to get their daily dose at a fixed facility.”

Joining the chorus of state and local behavioral health agencies is another federal agency, the Substance Abuse and Mental Health Services Administration, which provides grants to King County and other locations to make it easier for people with dangerous opioid addictions to receive treatment with methadone and other evidence-based medications.

According to a spokesperson at SAMHSA, agency officials are urging the DEA to remove the ban.

At a recent New York City gathering of the methadone industry’s professional organization, the American Association for the Treatment of Opioid Dependence, DEA official James Arnold said a proposal for a new set of regulations that would permit new methadone vans to be licensed was months away from completion.

Mark Parrino, who heads the industry group, said no security breach in any of the mobile vans licensed before the moratorium has ever been reported, leading industry experts to question why the ban persists.

Treatment officials in Connecticut, Maryland, New Jersey, New York and Washington state have expressed interest in deploying new methadone vans to fight the epidemic but have been stymied by the DEA moratorium, Parrino said. The most urgent need for mobile methadone, he said, is in Puerto Rico, where Hurricane Maria destroyed much of the territory’s transportation infrastructure and medical facilities last year. 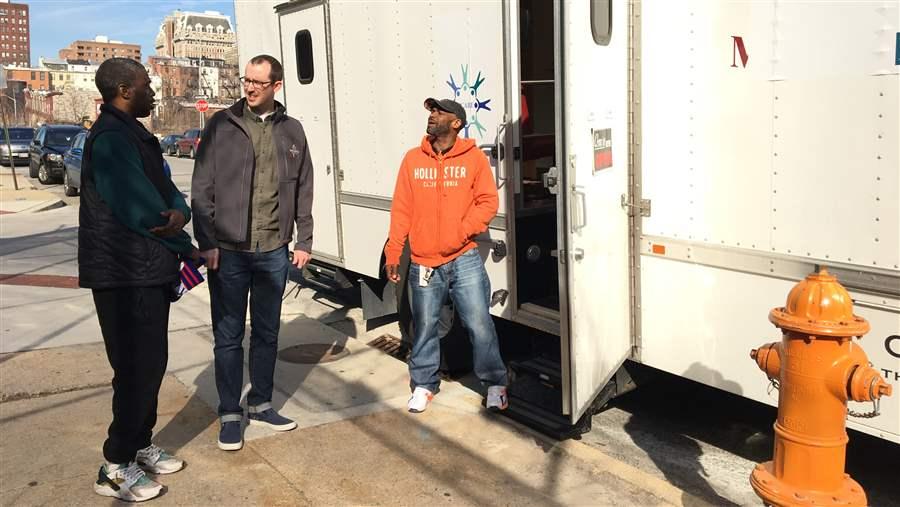 More than 2 million Americans are addicted to opioid painkillers or heroin, but only 1 in 5 is receiving treatment for their disorder, according to SAMHSA. Of those, most are not receiving methadone or one of the two other approved medications considered by addiction specialists to be the standard of care.

That’s partly because many people who use opioids and other drugs are in denial that they have a problem. But among those who decide they need treatment, many report they can’t afford it or are unable to find a program  within commuting distance.

Only about a third of all treatment facilities offer all three medications, according to Health and Human Services Secretary Alex Azar, and Medicaid and private insurance coverage of the medications varies widely from state to state.

Of the three available medications for opioid addiction, methadone is the oldest, most researched and most widely used. But it is also the most tightly regulated.

Taken daily under supervision as required by federal regulations, methadone is out of reach for many who do not live within a reasonable distance of the nation’s roughly 1,500 methadone dispensing locations. The two newer approved medications — buprenorphine and a time-release form of naltrexone called Vivitrol — can be prescribed by a physician and taken at home.

Similar to patients with other chronic diseases, people addicted to opioids typically respond better to one medication than to another. For many, methadone is the only addiction medicine that successfully reduces drug cravings and wards off relapse. But many people live far away from brick-and-mortar methadone clinics.

Although relapse is common in all types of drug treatment, research indicates that people who take any of the three approved medications have a greater shot at remaining sober compared to those who receive therapies without medication. But to remain in recovery, people with opioid addictions often must stay on what is known as maintenance therapy for years, or for life.

In Washington state, Seattle-based Evergreen Treatment Services, which operates the only methadone van in the state, just received an $11 million grant from SAMHSA, part of which has been set aside to buy four new customized vans for about $200,000 each.

The vans — designed to provide space for counseling, urine drug screens and methadone dispensing — are slated to make daily visits to one or more hard-hit Seattle neighborhoods, as well as the city of Renton in surrounding King County, and two other underserved cities with high addiction rates outside of the county — Olympia and Hoquiam.

According to Evergreen director Molly Carney, Washington state’s substance abuse agency is working with SAMHSA to get DEA permission to purchase and outfit the vans. “We’re told they’re actively working on it,” she said, “but there’s no timeline and no promise of when it will get released.”

In New York, Democratic Gov. Andrew Cuomo has dedicated millions in state dollars to expanding access to treatment using all three medications — methadone, buprenorphine and naltrexone — and officials at the state’s alcohol and substance abuse agency are talking to the DEA about lifting the ban, a spokesperson said.

According to the agency, mobile addiction treatment and transportation services are a critical part of New York’s strategy to offer treatment to more people with addiction. “Location and access to transportation should never be a barrier for someone to receive the services they need to fight this disease,” said New York’s drug and alcohol commissioner Arlene González-Sánchez. 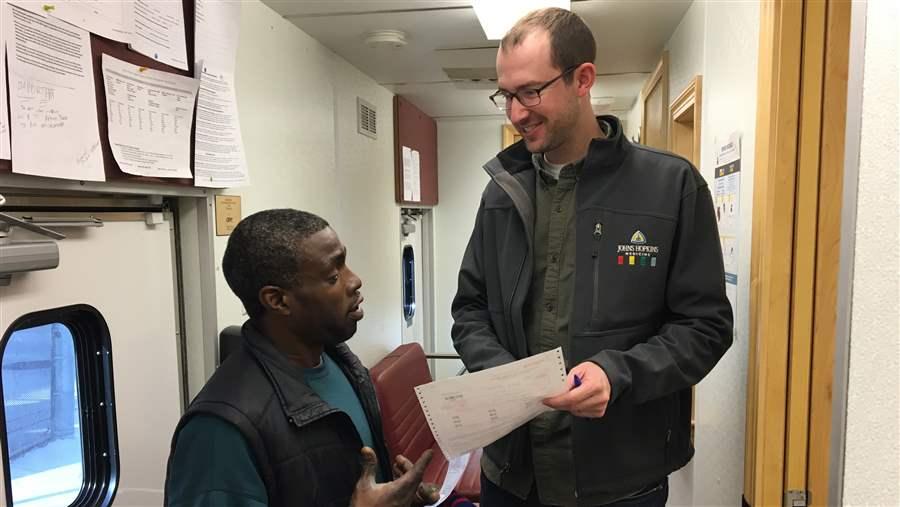 In Mays Landing, New Jersey, one of a handful of grandfathered methadone vans licensed prior to the DEA’s moratorium is parked outside the Atlantic County Jail and serves as a dispensing clinic for inmates. The program has proven so successful at keeping inmates in recovery from opioid addiction that another methadone program about 80 miles up the coast in Neptune City wants to do the same thing.

According to JSAS HealthCare’s administrative director Margaret Rizzo, incarcerated pregnant women on methadone maintenance who come into the nearby jail in Monmouth County are given daily “guest doses” of the addiction medication while they’re inside because of federal requirements. “But if you’re a male on medication assisted treatment when you come into the same jail, you’re out of luck,” she said.

If the DEA lifts its moratorium on mobile methadone, Rizzo said, her treatment facility plans to buy a van to provide methadone to up to 50 inmates at the county jail.

In 1990, opioid treatment centers in Baltimore and Boston became the first in the nation to expand their urban drug treatment operations by outfitting vans to serve high-demand neighborhoods.

The drug treatment program in Baltimore, the Institutes for Behavior Resources, operated a DEA-licensed van and a backup van to dispense methadone to hundreds of patients for about 10 years, and then purchased new vans and used them for another 10 years before parking the vehicles and letting their licenses expire.

Two years ago, Behavior Resources leased one of those vans to another nonprofit program, the Behavioral Health Leadership Institute, which is using the vehicle to provide buprenorphine instead of methadone. Although the DEA also has authority over buprenorphine, it has not banned licensed prescribers of the medication from working out of a van.

Parked outside the Baltimore Central Booking and Intake Center, the repurposed van recently offered an opportunity for Terrance Washington, 44, to start turning his life around. A heroin user for almost 20 years, he was released from the Baltimore jail in January.

“When I got out, I kept on going right past the van,” Washington said. “But later my friend told me he’d been going for treatment there, so I went back to check it out.”

Washington got counseling, a prescription for buprenorphine, and a makeshift ID to take to a nearby drugstore. Since then, he said, he’s been taking his addiction medication and stopping by the van every few days to talk to a nurse or doctor about his progress.

On a sunny March morning, Washington stepped into the van and shimmied sideways to sit in a tiny counseling booth and talk to the nurse on duty about his recovery.

As he left, Washington said finding the van and getting on medication for his drug cravings has been “a big relief.” Instead of breaking the law to pay for heroin again, he said, it’s allowed him to try to get caught up on his rent and take care of some outstanding legal issues.