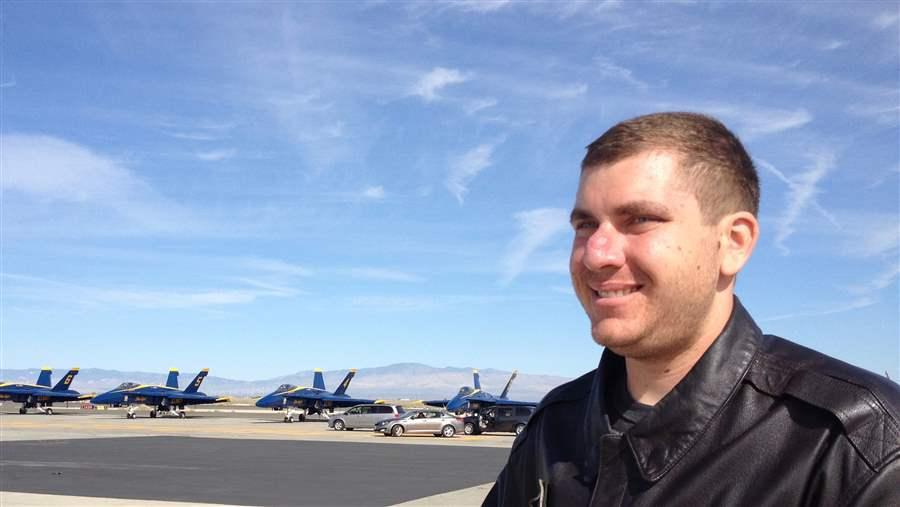 When he turned 18, Greg Demer lost his right to vote because of his autism, joining thousands of other people with mental disabilities who were stripped of the right during guardianship proceedings. More than a decade later, a different judge returned to him the right to vote.

Like many people with autism, Greg Demer is bright but has difficulty communicating. He has a passion for the history of military aircraft, but he can’t quite keep up a conversation with new people. When he meets someone, he’ll quote from movies or ask them about their favorite Teenage Mutant Ninja Turtle.

His mother, Linda Demer, worried that he wouldn’t be able to make complicated decisions about his finances and health care once he turned 18. So, in 2005, a judge in Los Angeles, where they live, granted her conservatorship over Greg.

But in the conservatorship process, the judge also stripped away Greg’s right to vote. He was not only unfit to make decisions about his health care and finances, the judge ruled, but he also was unfit to participate in the democratic process.

In being declared “mentally incapacitated,” he joined tens of thousands of Americans with disabilities who every year lose their right to vote during guardianship proceedings, according to the California-based Spectrum Institute, an advocacy group for people with disabilities.

Laws in 39 states and Washington, D.C., allow judges to strip voting rights from people with mental disorders ranging from schizophrenia to Down syndrome who are deemed “incapacitated” or “incompetent.” Some of those states use archaic language like “idiots” or “insane persons” in their statutes.

The states that do not have similar restrictions are Colorado, Idaho, Illinois, Indiana, Kansas, Maine, Michigan, New Hampshire, North Carolina, Pennsylvania and Vermont.

Not only is there no agreement among legal and psychological experts over whether certain people with disabilities should be disenfranchised, but there is also no set standard for measuring the mental capacity needed to vote. There is a tension between protecting the integrity of the electoral process and the civil rights of a person under guardianship, said Dan Marson, a professor emeritus at the University of Alabama at Birmingham’s department of neurology.

“What should we require as a minimal standard?” he said. “There is not a clear answer.”

Should There Be Limits?

Fear of voter fraud is a primary reason why certain people with cognitive impairments are kept from the polls.

Alzheimer’s patients, for example, could be given a ballot while awake but only partially alert, and their caretaker or family member could cast it for them. Or a staff member at an assisted living facility could fill out or influence the ballots for dozens of people with severe cognitive issues.

“You would have people essentially voting twice,” said Pamela Karlan, the co-director of the Supreme Court Litigation Clinic at the Stanford University Law School. “Some people’s cognitive abilities are so impaired, they shouldn’t vote. They have no idea what’s going on.”

Karlan said people should not only express an interest in voting, but also understand what voting means.

A very small number of votes, and in some cases potentially “tainted” votes by people who don’t have the “mental capacity of understanding an election,” can make a big difference in a close race, said Paul Appelbaum, the director of the division of law, ethics and psychiatry at Columbia University’s department of psychiatry.

That sort of situation is not so farfetched, he said. A congressional race in Pennsylvania this month was decided by around 600 votes.

But in those examples of voter fraud, it’s not the person with a disability committing the crime — it’s the caretaker or family member, said Michelle Bishop, an advocacy specialist at the National Disability Rights Network based in Washington.

“We don’t strip someone of their rights in the name of protecting their rights,” Bishop said. “They are literally the last people in the U.S. who can get their right to vote stripped because of their identity. Having a disability does not mean you are not competent to vote.”

While some may not be able to make sound choices about their health care or finances, they can still understand and participate in the electoral process, Bishop said. The capacity to make choices depends on the situation.

Why a Standard Is Needed

Most states lack a clear legal definition of mental incapacitation, so it’s often up to a judge to make that determination, according to Jennifer Mathis, the director of policy and legal advocacy at the Bazelon Center for Mental Health Law. Limiting the vote to people who have the mental capacity “sounds reasonable,” Mathis said, “but it is applied indiscriminately.”

Some judges take away the right from every person who comes before them in a guardianship case, she said. Other judges won’t preserve the right unless the person with a disability can name the mayor or president — something many people without disabilities can’t do, Mathis said.

Without a standard for measuring capacity, people with mental disabilities need to be properly represented in court, said Tom Coleman, the legal director of the Spectrum Institute. Coleman analyzed six months of court records and found that 90 percent of people with developmental disabilities placed under conservatorship in Los Angeles County were losing their right to vote. Statewide, 32,000 Californians have lost their right to vote in the past decade, he said.

“They were being pushed through the system as a matter of routine.”

Coleman lobbied for the California law, which took effect in 2016 and says the right to vote can be taken away only if a court finds “clear and convincing evidence” the person can’t express a desire to vote.

California, in its new law, joined Maryland, Nevada and New Mexico in adopting a standard promoted by the Bazelon Center and the American Bar Association. The standard is simple, Mathis said: Can a person communicate, with or without accommodations, a desire to vote?

“Can you make a choice?” she said. “It’s self-selecting. If someone with dementia can’t make a choice, yeah, that person doesn’t have the capacity to vote.”

However, a 2001 decision from the U.S. District Court for the District of Maine offered a stricter standard: Does a person understand the “nature and effect” of voting? Washington state uses that language in its statutes.

Appelbaum from Columbia University helped create that standard. He argued that people should know what they’re doing when they’re voting — both the process of casting a ballot and the consequence of that vote. If people don’t understand, it could “cast a shadow on the legitimacy of the process.”

The groups of people who are at the greatest risk of lacking capacity are those with moderate to severe Alzheimer’s disease, his research shows. People with mild Alzheimer’s and nearly all people with a serious mental illness have the capacity to vote, his studies show.

Vague responses about candidates, like, “I just think he’s good,” are insufficient, according to the stricter standard. But Americans often vote for candidates for vague reasons, such as liking someone’s hair or thinking the candidate would be nice to have a beer with, said Jason Karlawish, a professor of medicine at the University of Pennsylvania. People with disabilities shouldn’t have a tougher standard, he said.

The reason for wanting to vote for someone is sometimes as simple as, “She made me happy,” which was why Daniel Holm, a Nebraska man with Down syndrome, said he voted for Hillary Clinton in 2016.

Mary McHale, his mother and legal guardian, sat down with the then-18-year-old and helped him fill out his absentee ballot, going candidate by candidate, consulting a chart she made about the candidates and their positions.

“I framed it in a way that he could understand,” she said. He reads at a fourth-grade level, and is making his way through the Harry Potter books.

When they finished, he signed his name and they mailed in the ballot. He was proud of his vote, his mother said, joining his cousins and other “typical people” who got to participate in the democratic process. 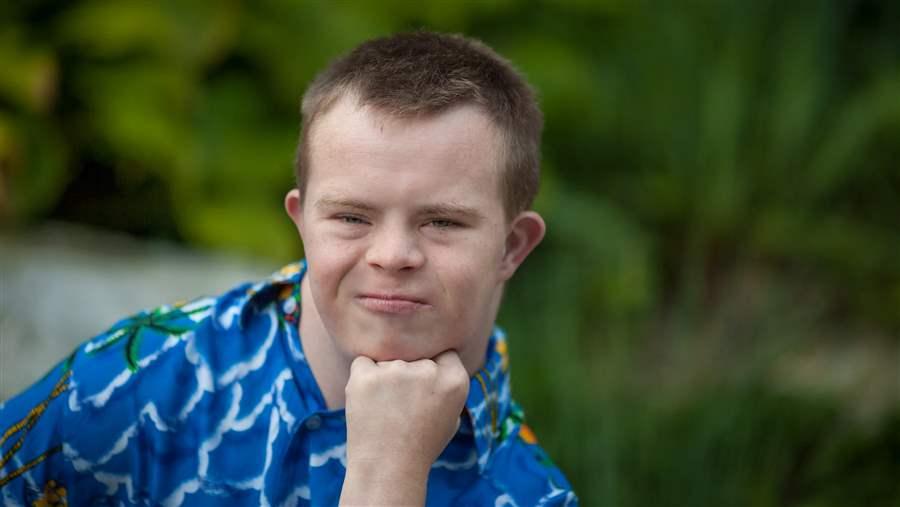 Daniel Holm, a Nebraska man with Down syndrome, voted for the first time in 2016.

Getting the Right to Vote Back

An estimated 1.5 million adults are under legal guardianship nationwide, according to the AARP, but there is no data indicating how many have lost their right to vote. There is little movement in state legislatures to eliminate restrictions on voting for people with mental disabilities, Mathis said.

So, in places such as California, Coleman is hoping to restore the right to vote for many others who had them taken away. He’s helped Greg Demer get his back.

A decade after a judge stripped Demer of his right to vote, he had it restored by a different judge bending to pressure from Coleman. He missed 10 years of presidential, gubernatorial and mayoral races, but at the age of 28, Demer could finally vote.

“It was a way for my son to be proud of himself,” Linda Demer said, “and return some of his self-esteem.”

Greg Demer now works at the Santa Monica Museum of Flying — one of his three part-time jobs — working to restore military aircraft, fulfilling his passion for aviation.

After he filled out his absentee ballot for the 2016 presidential election, the first election he could participate in, he put on an “I Voted” sticker. He then gave his mom a high-five.