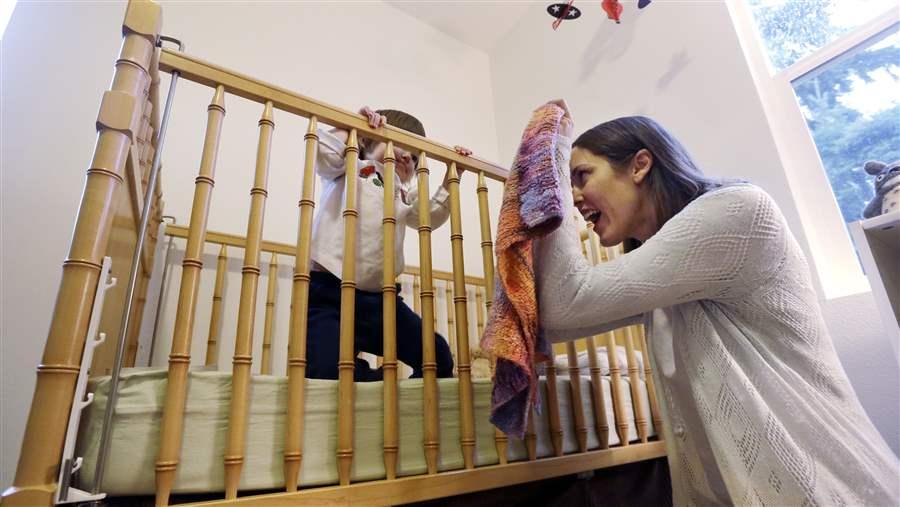 Seattle resident Marita Graube plays peek-a-boo with her daughter, Ayame, as the girl sits in her crib and atop an organic mattress without fire retardant chemicals. Washington was the first in the nation to ban the flame retardant decaBDE. Many other states are doing the same in light of lack of federal action.

The U.S. Consumer Product Safety Commission voted last fall to rid toys and furniture of a dangerous flame retardant that scientists say can cause lasting health problems in both children and firefighters. But advocates on the issue fear an internal political squabble will delay the agency from moving ahead with the ban.

Sixteen states aren’t waiting around. They have bills in the works this year to ban or tightly restrict certain fire retardants from use in toys, child car seats, strollers and other children’s and household products.

For many, the states’ legislation has taken on new urgency due to questions about what the CPSC might do if President Donald Trump’s nominee to head the commission is confirmed. Late last year, the commission voted to initiate a rule-making process that might eventually lead to a ban on the chemicals known as organohalogens, and warned the public about the dangers in the fire retardants in children’s products and household goods. But instituting a total federal ban on the products could take years.

The state bills vary in scope, but their intent is clear — to get rid of chemicals that have been found by scientists to pose more risks than rewards. States have been on track to ban certain flame retardants for some time, but some existing statutes already have become outdated, forcing the states to enact new laws to keep up. Indeed some state lawmakers, who predict that companies will evolve their chemical formulas, say they want to implement broader bans on potentially dangerous flame retardants that might not even yet be developed.

“If the federal government isn’t going to do it, we need to be the ones to do it, and we are,” said Democratic state Sen. Virginia Lyons, the lead sponsor on a piece of toxic chemicals legislation in Vermont.

Lyons’ proposal would go beyond individual chemicals and set up a mechanism to ban flame retardants from children’s products if they are deemed unhealthy by the state Department of Health following a scientific assessment.

“It’s an important and comprehensive bill for children’s products so we don’t have to pass individual laws on individual chemicals,” Lyons said. “The comprehensive program enables the Department of Health to take a lead in identifying toxic chemicals, regulating, labeling or banning.”

The issue for states is what to do about organohalogens, a group of chemicals used as flame retardants in upholstery, mattresses, electronic enclosures and some children’s products. The federal Environmental Protection Agency says the chemicals cause adverse effects such as cancer, endocrine issues and reproductive problems.

The chemical industry opposes most of the broad-based bills, saying that the chemicals should be evaluated individually, not as part of a class. “This broad class has different characteristics and profiles and different uses,” said Rob Simon, vice president for chemical products and technology for the American Chemistry Council, a trade group. “Just lumping them all together and saying they are bad isn’t accurate.”

In addition, the group testified to the CPSC that “the fire hazard of products is a real issue. … In the last few years, there have been hundreds of recalls of consumer products based on fire hazards. The reality is that the nature of today’s consumer products presents serious fire risks.”

But some scientists and firefighter groups think the chemical risk is worse. A 2010 study by the Marine Environmental Research Institute, in Blue Hill, Maine, concluded that: “Flame retardant chemicals can pose a potentially greater hazard than the risk from the fires they are supposed to prevent. Reducing the use of toxic and untested halogenated flame retardants will protect human and animal health and the global environment.” The study concluded that regulators should take this into account.

While the chemicals are designed to slow down fires in homes and other places, which would seem like a good thing for firefighters, firefighters’ associations want them banned too. In testimony to the CPSC late last year the International Association of Firefighters called for getting rid of the substances because of studies that show firefighters’ exposure contributes to increased cancer risk.

“The IAFF supports banning the use of organohalogen flame retardants because when burned they are all carcinogens that contribute to cancer and have additional negative effects on the health of our members,” said Racquel Segall, an occupational health specialist for the firefighters, in her testimony. “Given the increasing body of evidence that indicates the persistence, bio-accumulation and potential health concerns of these fire retardants, we believe the health risks associated with the use of these chemicals is greater than the fire risk without using these chemicals.”

The IAFF has delivered similar testimony in states such as Vermont, Minnesota, Washington, Maryland and Virginia, according to spokesman Tim Burn.

Some states already have begun to address the issue. California, in the wake of a prize-winning Chicago Tribune series that exposed the toxicity of the chemicals, enacted a 2013 law that requires manufacturers to attach a warning label to any furniture that has organohalogens.

Minnesota and Washington, D.C., also have approved anti-fire-retardant chemical laws. More states are looking to join them this year. 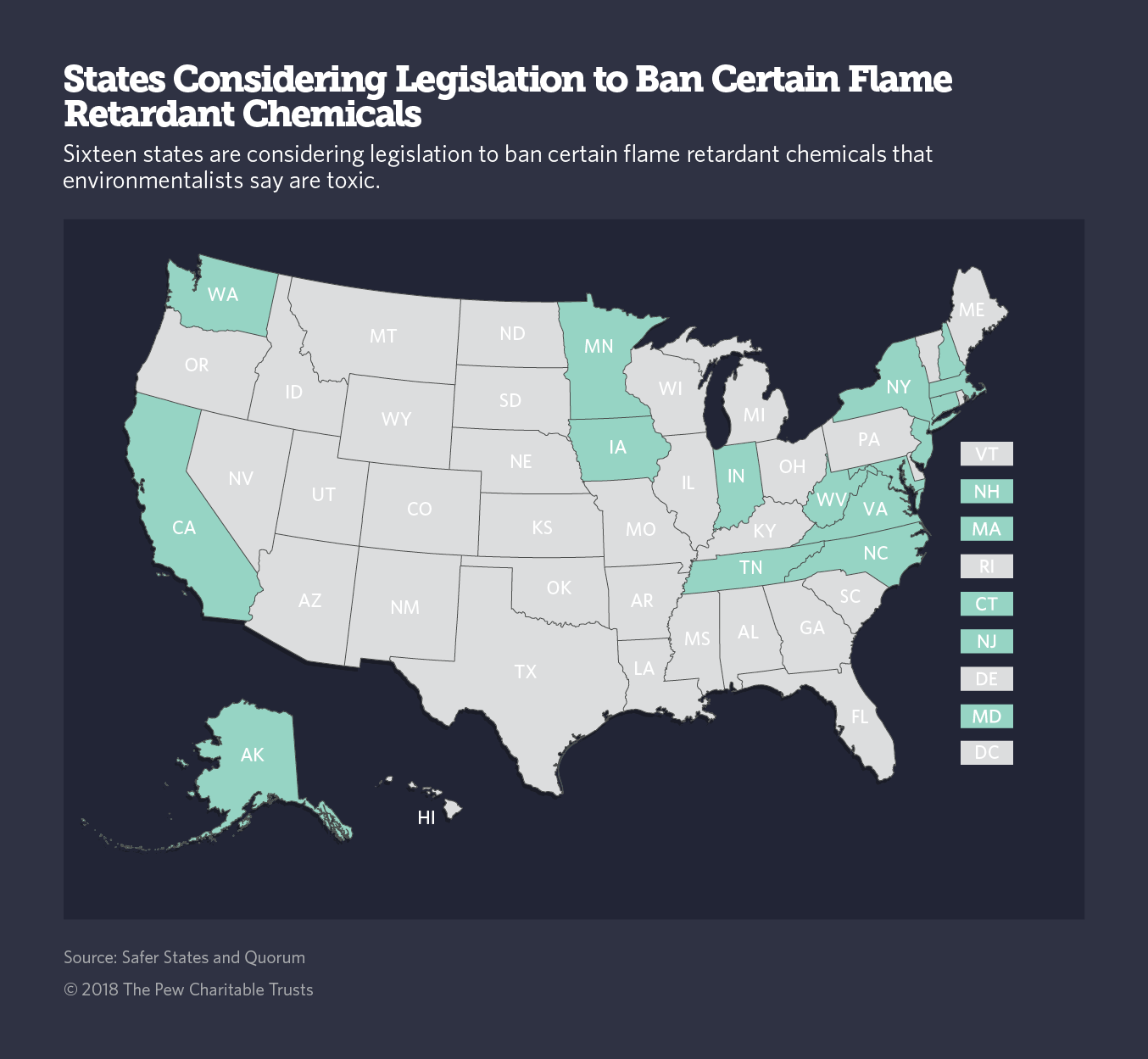 In Maryland, state Del. Angela Angel, a Democrat, is pushing a bill to add new organohalogens (an alphabet soup of chemicals known as decaBDE, HBCD, TBBPA, TCEP, or TDCPP by mass) to the list of banned fire retardants, including banning them from children’s toys, car seats and strollers. The bill would require manufacturers to get rid of the chemicals by January 2019, if they want to sell the products in the state.

In Massachusetts, a bill that would have banned 11 different flame retardants from highchairs, car seats, nursing pads, furniture, carpet pads and toys was approved last year 39-0 by the Senate, but not the House. This year, the Democratic state senator who sponsored last year’s bill, Cynthia Creem, said she has a House sponsor and is more optimistic that the bill will pass. It helps that Creem is now Senate majority leader, giving her more clout.

“This is a public health bill,” Creem said. “The truth is that we have been misled and our homes are now host to products that unnecessarily contain toxic flame retardants.”

It’s unclear how quickly the Consumer Product Safety Commission might act on its ban.

In an op-ed for The Hill, a Capitol Hill newspaper, outgoing Democratic CPSC member Marietta Robinson said acting chairwoman Ann Marie Buerkle, who has been appointed by President Donald Trump to be permanent chairwoman, has “aligned herself with the positions of regulated industries at the expense of the safety of consumers.”

Buerkle voted against proceeding to the rule-making on the flame retardant chemicals. Robinson voted for it.

That’s cause for concern for consumer groups. While they are pleased that the process to ban the chemicals has begun, the way forward is unclear.

“We know acting chair Buerkle opposed moving forward with this rule,” said Rachel Weintraub, legislative director and general counsel of the Consumer Federation of America. “We definitely have concerns about how this will continue to be a priority at the CPSC.”

The federation is hopeful that the guidance against the chemicals will go forward, she added. “The fact that states are taking action and building on what has happened at the federal level is significant.”

“The safety commission granted the petition, but that doesn’t automatically result in a ban. That’s a multiyear process, and at this point in time, who knows what’s going to happen,” said Eve Gartner, an attorney for Earthjustice, a nonprofit environmental law firm headquartered in San Francisco.

“Many states in the legislative session we’re currently in are looking to actually put into law the policy that the CPSC has said would be the right policy but has not yet codified into law,” Gartner said.