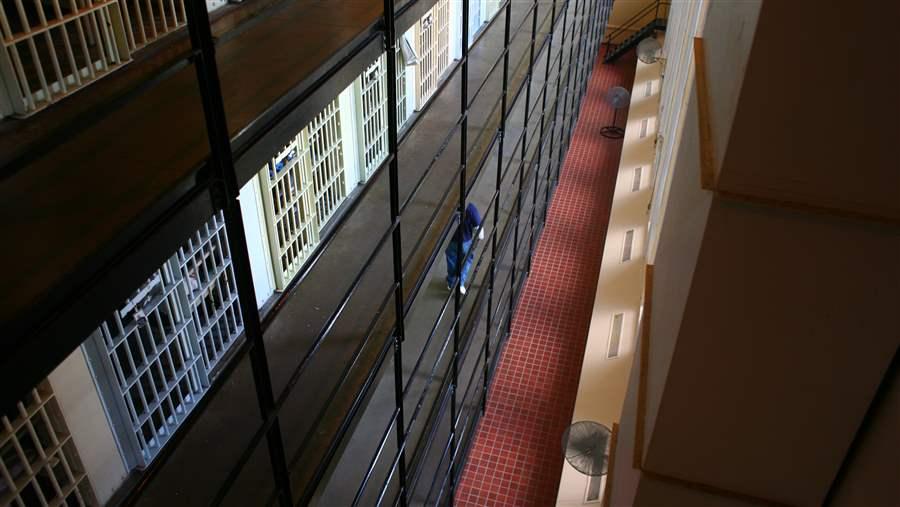 Anamosa State Prison, Anamosa, Iowa. Iowa is one of the states where corrections departments are partnering with health care agencies to make it possible for offenders’ conditions to be treated when they re-enter the community.

Nearly all people in prison eventually leave, many of them with chronic diseases or behavioral conditions that may affect public health and safety in the communities where they will live. In a positive trend, corrections departments are partnering with health care agencies in some states to make it possible for offenders’ conditions to be treated when they re-enter the community.

Officials say the collaborations – in states such as Connecticut, Iowa, Missouri and Ohio— are promising because they can improve public health and safety while providing states with a better return on the money spent on treating offenders while they are in prison. Departments of correction collectively spent $8.1 billion on prison health care in fiscal 2015.

In Ohio, for example, the Department of Rehabilitation and Correction partners with the state’s Medicaid agency to assist eligible offenders in applying for and enrolling in the federal-state health program and then selecting  a Medicaid-managed plan 90 days before their release. Enrollees who have significant health risks— such as hepatitis C,  HIV,  pregnancy, a serious mental illness, or a substance use disorder—receive additional care management services, including reviews of their medical histories and  a pre-release transition plan.

For released offenders who have chronic health conditions, Medicaid coverage or access to care at a Veterans Affairs clinic or similar provider can be crucial.  When HIV-infected people treated with antiretroviral therapy in prison continue their medication after release, for example, the risk of disease progression and transmission to others is lower.  Continuing their care also contributes to lower recidivism rates among certain populations, including people with substance use disorders, according to research by the U.S. Department of Health and Human Services.

Ensuring that released offenders have uninterrupted health care protects the investment that taxpayers have made in their treatment behind bars, producing benefits for the offender and their communities.

Connecticut corrections officials teamed up with the state’s department of mental health and its Medicaid agency to develop a prescription voucher program for individuals released from correctional facilities. The program supplements a two-week supply of medication provided by the corrections department with a pharmacy voucher, which can be exchanged for a 30-day supply of a prescribed drug at any Connecticut pharmacy that accepts Medicaid. The cost of providing the medication is split between the corrections and Medicaid budgets. Iowa and Missouri have similar programs although both are financed through grants. Iowa’s only covers psychiatric medicines.

Bringing together corrections officials, who manage the health care of offenders while they are incarcerated, and Medicaid administrators and providers outside prison walls can save taxpayer dollars, reduce the threat to the community of communicable diseases, and make it less likely that former prisoners will commit another offense.

A recent report by The Pew Charitable Trusts, “Prison Health Care: Costs and Quality,” offers practical information and management insights from states that policymakers can use to enhance  public health and safety.

Schiff and Fehr are senior officers at The Pew Charitable Trusts.