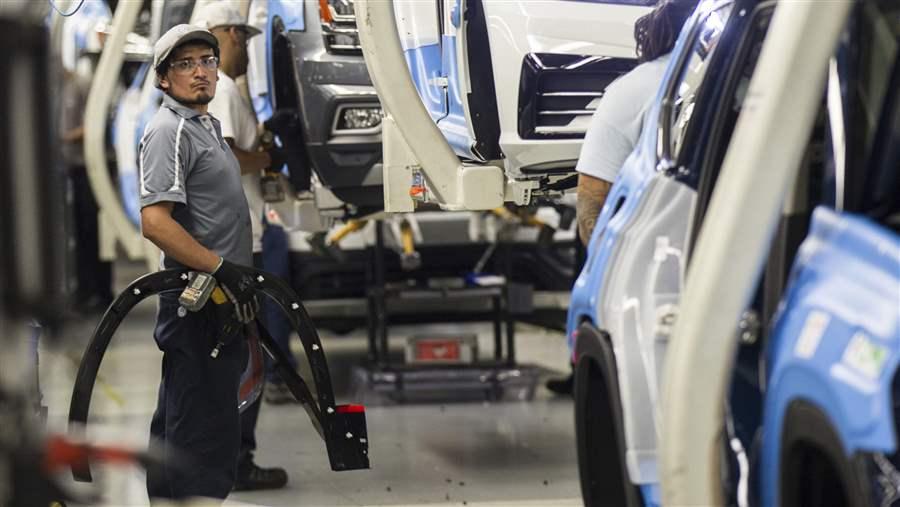 Workers at Volkswagen’s U.S. plant in Chattanooga, Tennessee. The Chattanooga plant has foreign trade zone status. It’s unclear whether manufacturers in the zones will be able to evade new tariffs on steel and aluminum.

Manufacturers that operate in foreign trade zones may be able to evade President Donald Trump’s new tariffs on steel and aluminum imports, trade experts say. But there are a lot of unanswered questions about how the tariffs — which were justified on rarely-used national security grounds — will be applied in zones.

“This issue is so new and unprecedented that even Customs has not finalized how they are going to handle these transactions,” Tom Gould, senior director for customs and trade at Miami-based law firm Sandler, Travis & Rosenberg, said in an email.

There are close to 200 foreign trade zones in the United States, from the Port of Long Beach to a five-county area in Colorado’s rural Eastern Plains. The federal government created the FTZ program during the Great Depression to help domestic and foreign companies delay or reduce customs duties and fees.

Under most circumstances, manufacturers in foreign trade zones can choose to pay duties on a final product or on its components. For some companies, such as automobile manufacturers, flipping the duty rate can lead to big savings.

But Trump’s tariffs are unusual. They are authorized under a 1962 law that allows the government to limit imports that threaten national security. There’s little to no guidance on how such tariffs will play out in foreign trade zones, Gould said.

The federal government has adjusted imports on national security grounds on two other occasions since 1979, according to a 2001 Commerce Department investigation into iron ore and semi-finished steel imports. The report found no evidence of a national security threat from such imports at the time. Trump’s tariffs are the first national security tariffs imposed since the report was published.

Companies can’t typically use foreign trade zones to avoid other special tariffs, such as antidumping duties. Trump’s tariffs may be applied in a similar way, Erik Autor, president of the National Association of Foreign Trade Zones, an industry association, said in an email.

“Special tariffs imposed through a trade remedy action are subject to different rules,” Autor said. “As a general rule, zone operators may be able to delay, but not avoid payment of these special duties.”

The new steel and aluminum tariffs will apply to products that enter the United States beginning this Friday, March 23.