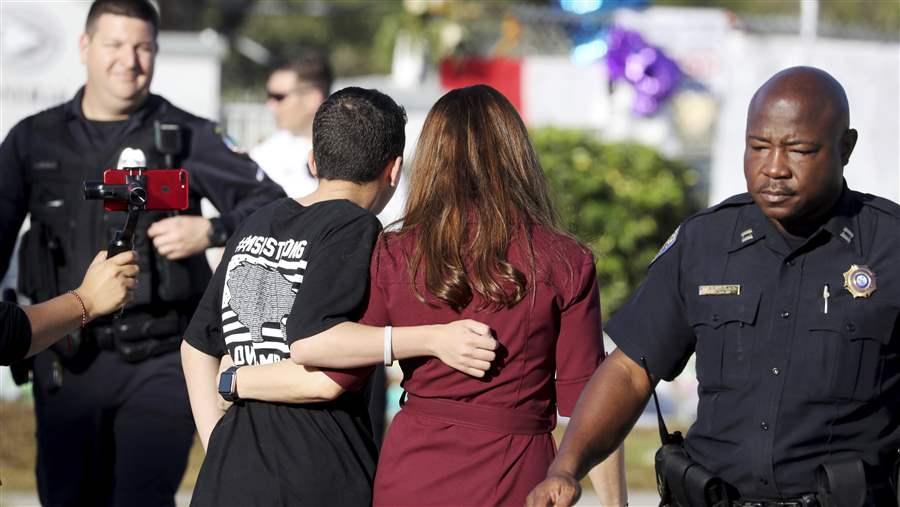 Camille Aponte walks with her son, Nelson Laboy, as he heads into school at Marjory Stoneman Douglas High School for the first time after a former student opened fire at the Parkland, Florida, school. In the wake of the shooting some state lawmakers are considering establishing anonymous tip lines.

After a teenage gunman killed 17 people at a Parkland, Florida, high school last month, schools across the country were hit by a wave of copycat threats.

In Colorado, at least two high school students were arrested based on information sent to the state anonymous tip line and mobile app, known as Safe2Tell. “They had a list, they had weapons, they knew exactly what they wanted to do,” said Colorado Attorney General Cynthia Coffman, whose office administers the program.

States across the country are responding to high-profile school shootings and rising teen suicide rates by creating tip lines modeled on Colorado’s. The programs aim to prevent young people from behaving dangerously, whether that means bullying, using drugs or killing someone.

Coffman said that Safe2Tell has saved lives in Colorado, and that such a system could have prevented the Parkland shooting. Nikolas Cruz, the expelled student who has admitted to shooting his former classmates at Marjory Stoneman Douglas High School, had a long record of disturbing behavior but it didn’t provoke a sufficient response from local authorities. A tipster’s warning to an FBI hotline was never communicated to local law enforcement.

Tips that are sent to Safe2Tell, in contrast, are required to be passed on to school districts and often police departments, and local officials are required to investigate. That might mean setting up a meeting between a student and a school counselor, or it might mean sending a police car straight to a student’s home.

“Something like Safe2Tell would have led to an intervention,” Coffman said of the shooting in Florida. “I feel very confident saying that.”

Tip lines, which are relatively inexpensive and don’t affect gun control laws, are one of the few policy responses to mass shootings that Republicans and Democrats can agree on.

Colorado launched Safe2Tell after Columbine in 1999. Since 2014, Michigan, Nevada, Oregon, Utah and Wyoming have launched similar programs, prompted in part by the Sandy Hook massacre in 2012.

In the wake of the Parkland massacre, the Colorado Safe2Tell office has fielded calls from the Trump administration and interested state and local officials nationwide. “We’re getting calls from all over the country now, it’s crazy,” said Susan Payne, the director of Safe2Tell.

The Colorado Attorney General’s Office is working with its Florida counterpart to potentially set up a tip line there. In Arizona, a bill setting up a similar program is making its way through House and Senate committees. And this week the U.S. House passed legislation that would authorize grants for such programs along with other school safety initiatives.

“Solutions on the state level — including in my home state of Utah — can help show us the way forward,” Republican Sen. Orrin Hatch said in a speech last month announcing the school safety legislation. Utah’s anonymous tip line has investigated 86 credible school attack threats since it launched in 2016, according to University of Utah Health, the health care system that manages the program. 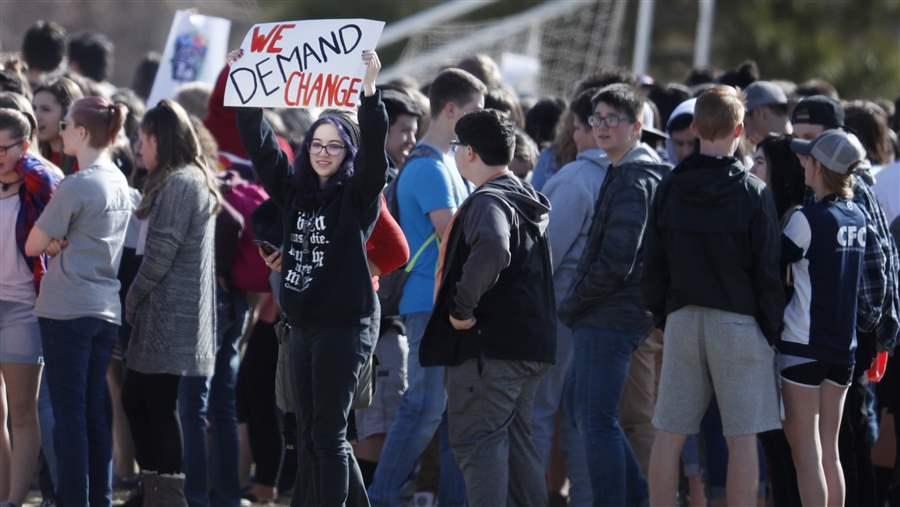 A Response to Columbine

Payne came up with the idea for Safe2Tell in the 1990s when she was working as a police detective in Colorado Springs. At the time, youth violence was rising locally, and she found that young people often had valuable information about what was going to happen and needed trusted adults to tell — and a reliable way to do it.

She envisioned a system that would teach children that speaking up was their civic responsibility and doing so didn’t make them a tattletale. Unlike the national tip line Crime Stoppers, there would be no cash reward for providing information. Safe2Tell expanded statewide in Colorado in 2004, initially as a nonprofit.

Today, Colorado state patrol officers respond to tips that reach Safe2Tell by phone, mobile app or website 24/7, and ask tipsters detailed questions to gather information about a potential problem. Alerts are sent out to local officials soon after the interview ends.

John McDonald, head of security for Jefferson County Public Schools, said he’s been woken in the wee hours by his phone buzzing with an incoming alert. Often, he said, young people submit their reports when they’re up late worrying about something.

He has responded to tips about everything from suicidal thoughts to underage keg parties. Sometimes, tips lead to dramatic rescues. He and Coffman both shared the story of a middle-school-aged boy who tried to hang himself in a park. The boy’s teenage brother found him and saved his life after a principal received a tip and called the family in alarm.

Payne says that non-emergency reports are important, too. For instance, a report that a child has been cruel to animals can help a school district intervene and address his violent tendencies early on.

Last school year, more than 9,000 tips were submitted statewide. The most common tip involved a suicide threat. Other common tips involved bullying, drug use, cutting and depression, and about 300 involved planned school attacks. Anyone can use the service, including parents, teachers, college students and other community members.

Social media has made it easier than ever for users to spot and share safety threats. Sometimes tipsters will share pictures students have posted online of themselves wearing body armor and posing with a gun.

To make sure the program is being used, Safe2Tell officials team up with schools and nonprofits to educate students about it. “Just a tip line, by itself, I don’t think is the answer,” Payne said.

Not a Magic Solution

Yet some acts of violence have slipped through the cracks. In 2013, a student entered a Denver-area high school armed with a shotgun, a hunting knife and three Molotov cocktails. He shot a classmate in the head and then shot himself. Both teenagers died.

Although several students had had concerns about the student’s violent tendencies, nobody called the state tip line. “If just one student or teacher had called Safe2Tell, this tragedy might have been averted,” a report from researchers at the University of Colorado at Boulder and the University of Northern Colorado said about the shooting.

The researchers found that, among other mistakes, the high school never properly taught students and staff about Safe2Tell. The program was advertised on posters in the hallways, and stickers on the back of student identification badges, but students had not been trained to use it.

School districts need a system for keeping track of and addressing worrisome behavior way before a student reaches a crisis point, said William Woodward, one of the report authors and director of training and technical assistance at the Center for the Study and Prevention of Violence at the University of Colorado. The center is working with Colorado schools to improve intervention.

And schools also need the resources to follow up. Nevada, for instance, hired more school social workers before it launched a tip line this year. “We didn’t want tips to come in, and nobody ready to respond,” said Christina McGill, director of the office for a safe and respectful learning environment at the Nevada Department of Education.

“I will kid you not: It is labor intensive,” McDonald said of the Safe2Tell program. Tips can come in at any time of day and might involve a coordinated response from school administration and the police. “You’re waking up a lot of people,” he said.

Coffman said that policymakers and school officials in other states have told her that they’re worried some schools may not have the capacity to adequately respond to a high volume of tips.

The number of tips submitted in Colorado have increased dramatically over the past decade, which Coffman attributes partly to rising awareness of the program and partly to rising incidence of mental illness among young people in Colorado and nationwide. “I think that is an undercurrent through all these statistics,” she said.

States that want to set up a program similar to Safe2Tell should start with legislation that guarantees anonymity for tipsters, Payne said, and they can reach out to Colorado for advice. Safe2Tell cost less than $600,000 to run last year, she estimated.

Payne said she has encouraged the White House to establish a national umbrella to oversee all the state programs, as tips can come in to Colorado’s system that affect other states, and vice versa.

Although the White House has not commented on the umbrella organization idea, President Donald Trump supports school safety legislation passed by the House this week, according to spokeswoman Sarah Huckabee Sanders.

Do you have a school safety concern to report?

Reach out to the following state tip lines: