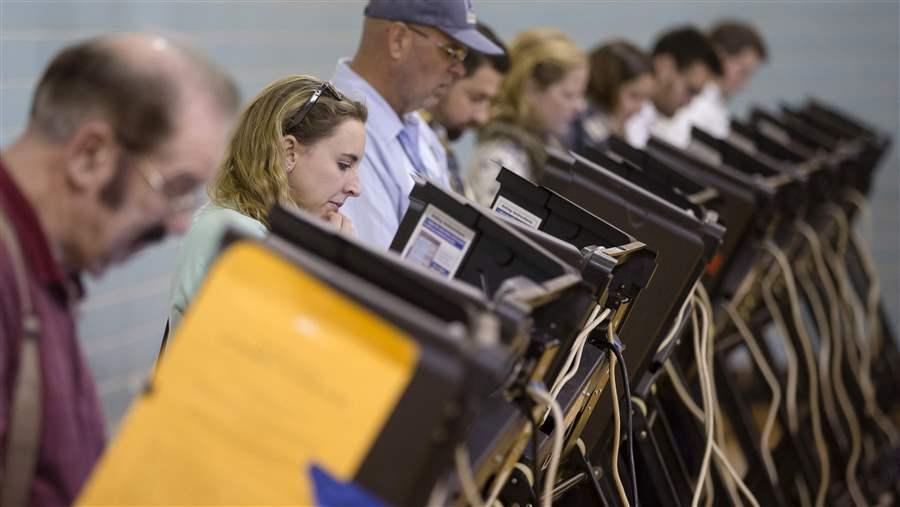 Voters use electronic voting machines at a polling place in Columbus, Ohio. Local officials across the country are trying to shore up their cybersecurity defenses ahead of the midterms in November.

The weakest link in any local voting system is that one county clerk who’s been on the job for three days and opens up an email file that could take down the whole system.

The head of every U.S. intelligence agency says Russia attempted to penetrate elections systems nationwide during the 2016 presidential election, and will try again during this year’s midterm elections.

In a decentralized election system with more than 10,000 separate jurisdictions, the onus for security is on local officials.

“That keeps me awake at night,” said Nancy Blankenship, the clerk for Deschutes County, Oregon.

Blankenship, like thousands of other county clerks, is the chief elections official for her area. It’s not so much the threat of foreign hackers changing votes that concerns Blankenship — Oregon is not only a vote-by-mail state, but also does its ballot counting without an internet connection — it’s the possibility that hacking could undermine public confidence in the system.

There are three major local cybersecurity threats during elections, said Maurice Turner, a senior technologist at the nonprofit Center for Democracy and Technology in Washington, D.C.:

As election officials conduct primaries and prepare for the midterms in November, they must understand and meet security challenges so voters are confident in the election process, Turner said.

“We know we have an adversary that has a known interest and capability to make that threat a reality.”

All it takes is one clerk clicking on a link in one apparently legitimate email for a hacker to penetrate a county or state system. So-called phishing attempts — where hackers might gain passwords, usernames or personal information through unwitting officials — are becoming more and more sophisticated, Turner said. It’s a race between local information technology departments and hackers.

“Most people respond to phishing very well,” Turner said. “But there will always be a small number of people who will click on the links regardless of their training. And once an intruder breaks into the system, they may linger for several days or months.”

Despite the threat, many local officials are confident in their ability to keep a voting system safe from hackers.

Sara May-Silfee, the director of elections for Monroe County, a community of 170,000 in eastern Pennsylvania, said she knows her county is secure, even if her state was one of 21 states targeted by Russian hackers in 2016.

“I can’t even begin to tell you how they’d hack us,” she said. “Nothing is hooked up to anything. How could anybody hack us? I’m not worried about anything. Sometimes it seems like a lot of hullabaloo.”

A potential breach by hackers has never been brought up in Election Day training for Monroe County, said Andi McClanahan, who has served as a judge of elections for her ward for the last six years.

“The issue has never been spoken about,” she said, “which now I’m thinking is problematic with the current issues we are facing.”

While hacking attempts failed in Pennsylvania, they were successful in Illinois, as hackers in 2016 accessed registration data for as many as 90,000 voters. Officials, though, say the hackers did not erase or modify any records.

Adam Weiner, who served as a poll worker in his South Loop neighborhood in Chicago during the 2014 midterm elections, said if a voter roll had been compromised by hackers, “it would have ground everything to a halt.”

“It was just not questioned that the data there was accurate,” Weiner said. “If we can’t trust the list, how can people vote?”

David Bjerke, the director of elections and general registrar of voters for Falls Church, Virginia, a Washington suburb, said if registration information is changed, voters should still cast provisional ballots, because officials can verify the eligibility of voters by going back to check paper registration records. Voters, he said, should check their registration status well before Election Day. And if the option is available, they should vote by mail or vote early so they can discover a potential problem with time to spare.

According to U.S. officials, Russian hackers have not changed ballot counts. And as more systems move toward paper ballots and away from digital voting machines, the risk of hackers manipulating vote counts decreases.

“At no time was the voting process from a tabulation or count perspective in jeopardy,” said Chris Chambless, the supervisor of elections for Clay County, Florida. “People hear there was an attempt to change the results of the election. And that was never in play.”

But Chambless, whose county outside of Jacksonville has sophisticated network security, is still concerned about “zero-day malware,” viruses so new that security systems cannot detect them. Florida also was targeted by hackers in 2016.

Where is the Support?

For more than a year now, after designating election infrastructure as critical, the federal government has begun working with states to assess the security of their voting systems. But officials say they need more resources to get cybersecurity experts in offices, to increase audits and to update equipment.

A bipartisan bill in the U.S. Senate, which would provide $386 million in federal grants to state election security, has stalled. The bill’s author, Sen. Amy Klobuchar, a Minnesota Democrat, said in February that more than 40 states rely on a voting system that is at least a decade old.

The U.S. State Department has not spent a dime of the $120 million it was allocated after 2016 to fight Russian election meddling. And for his part, President Donald Trump has not told intelligence agencies to stop Russian attempts to target U.S. election systems.

So, many local and state leaders are tackling security alone. Travis County, Texas, which surrounds Austin, brought in academics to develop a system that encrypts votes and stores them in a secure database. The system would allow for efficient auditing. Similar programs are in place in Los Angeles and San Francisco, and California is looking to replace its aging equipment.

Local election officials now need to be cybersecurity officials. But they have always had to be wary of misinformation campaigns.

In Bend, Oregon, Blankenship never thought she would have to fend off Russian hackers. But she has been concerned about misinformation for the last 15 years.