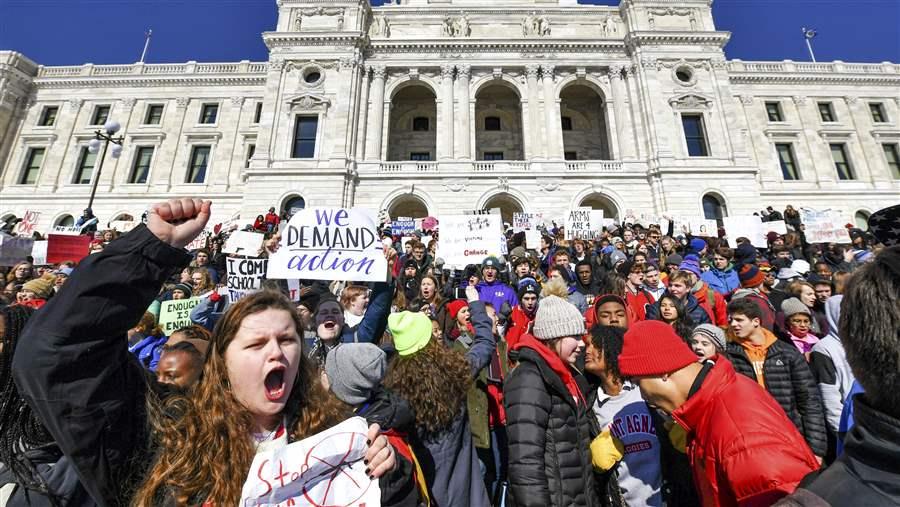 While President Donald Trump has decided to let states decide on many gun control measures, thousands of students across the country plan to walk out of their schools and universities Wednesday to call for stricter gun laws, defying potential punishment from school administrators.

The walk-out, which starts at 10 a.m. local time, is expected to last 17 minutes to honor the number of victims in the Florida high school massacre last month. More than 2,500 walkouts are planned in nearly every state, according to Women’s March Empower, the organizer.

Students in the Washington, D.C., area plan to stay silent outside the White House for 17 minutes, and then march on the U.S. Capitol. In Rhode Island, some students plan to march to the state Capitol in Providence.

While participants are demanding that lawmakers ban assault-style weapons, implement universal background checks, and keep weapons out of the hands of people who may be a danger to themselves and others, Congress and the White House seem reluctant.

In fact, Monday, Trump backed off his initial call for stricter gun laws in the aftermath of Marjory Stoneman Douglas High School shooting last month. Instead, he said he wants states to decide whether to increase the age for buying assault-style weapons from 18 to 21.

“States are making this decision,” he tweeted. “Things are moving rapidly on this, but not much political support (to put it mildly).”

Political support may not be there among Republican lawmakers, but a recent poll from NPR shows 82 percent of Americans are in favor of raising the legal age to buy guns to 21.

While the Trump administration instead focuses on plans to arm teachers nationwide, ban bump stocks and improve background checks, state legislatures are taking it upon themselves to address gun violence.

Historically, though, that doesn’t necessarily mean stricter gun laws. As Stateline has reported, after mass shootings states are more likely to implement laws that loosen gun laws, rather than restrict gun access.

Last week, Florida Gov. Rick Scott, a Republican, signed into law a bill that raises the minimum age to purchase a rifle from 18 to 21. The National Rifle Association subsequently sued the state in federal court to remove that provision.

The new law, however, will also arm teachers across the state, pending approval from local law enforcement and the school district.

Elsewhere in the country, Delaware last week passed new legislation banning bump stocks and increasing penalties for straw purchases, while the Mississippi Senate passed a bill that would allow guns in state classrooms.

On March 6, Oregon became the first state in the United States to ratify new gun control legislation after the Florida massacre, banning gun ownership from people convicted of domestic violence.

Students have been the leading voices in a call for stricter gun laws nationwide. Students in states like Arizona, Florida, Illinois, Maine, Maryland, Minnesota, Ohio, Pennsylvania, Texas and Washington have already participated in walk-outs and marched on their state capitols.

And March 24, students from around the country will descend on Washington for the “March for Our Lives” protest, which is being organized by the students from Parkland, Florida.