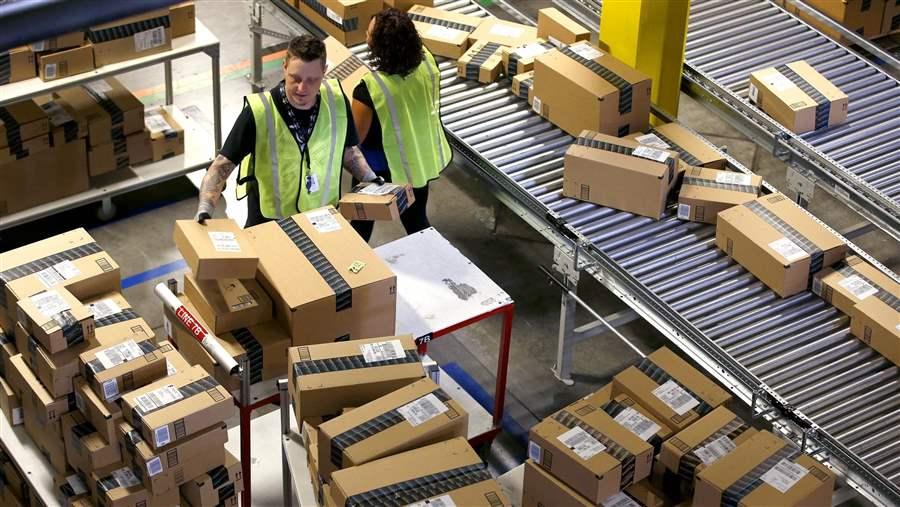 Amazon employees organize outbound packages at an Amazon warehouse. Amazon already collects and remits state sales taxes voluntarily, but states are readying laws to force other internet sellers to comply if the U.S. Supreme Court rules favorably in a case from South Dakota.

With the U.S. Supreme Court weeks away from hearing arguments in a landmark case on online sales taxes, several states are readying laws that would allow them to begin collecting millions of dollars almost immediately if the court rules in their favor.

States across the country are salivating at a potential windfall in sales taxes — but they’ll only get it if they have a law on the books that allows them to collect taxes from online sellers. For states without an income or corporate tax, the sales tax collections are even more important.

Currently, taxes are not collected on billions in remote sales, though Amazon, the biggest online seller, has agreed to do so in many states. The potential is huge: E-commerce sales made up 9 percent of all retail sales in the United States last quarter, topping $119 billion, adjusting for seasonal variation, according to the Census Bureau.

“It’s about the money,” said Max Behlke, who handles budget and tax issues for the National Conference of State Legislatures, which supports allowing states to collect the taxes. Behlke pointed out that in most states, sales tax revenue never rebounded after the Great Recession, despite the fact that Americans are buying more.

In part, that’s because they are buying online. “When Americans are buying more but the tax revenue is not rebounding, that’s just a measure of where young people are shopping,” he said. “Revenue begets action.”

Putting a law on the books now will likely shorten the time frame for collecting the revenue, he said.

The 45 states that have sales taxes maintain that altogether they could collect an estimated $26 billion annually in sales taxes on products sold remotely — online and via mail order — according to the National Governors Association.

A November 2017 estimate from the Government Accountability Office is lower, but pegs the potential revenue for state and local governments at $8 billion to $13 billion a year — though the analysis warns that businesses will face compliance costs.

Arguments are scheduled for April 17 in the case of South Dakota v. Wayfair Inc., in which the state contends that a 1992 high court ruling prohibiting collection of sales taxes from any seller that does not have a physical location in the state is outdated. South Dakota notes that the underlying case, Quill Corp. v. North Dakota, involved sales of floppy disks, symbolizing how outdated the case really is.

Defendants, which include online retailers, argue that the remote tax collection violates the commerce clause of the Constitution, which gives the federal government the power to regulate commerce among the states. A ruling is expected by summer.

At least nine states have bills in their legislatures this year that would facilitate the collection of sales taxes on remote purchases according to NCSL, which keeps track of such legislation. They include Georgia, Hawaii, Idaho, Iowa, Kansas, Nebraska, New Mexico, New York and Oklahoma.

This year’s legislative push follows action in about a dozen states last year, where officials enacted laws or wrote administrative rules that would allow online sellers to collect remote sales taxes and then remit the funds to state coffers.

In general, lawmakers argue that extending sales taxes to the internet is not a new tax, but rather the enforcement of an existing levy. Technically, buyers already are required to remit state taxes on things they buy on the internet, but in practice, few, if any, do so.

Oklahoma Sen. Tom Dugger, a Republican who identifies himself as the only certified public accountant in the state’s Legislature, is sponsoring legislation to make sure his state is ready. “This just makes sure we get in now because we don’t know when the federal government will make it active.”

Dugger’s bill would require internet sellers, if they do not collect and remit state sales taxes themselves, to report the number and amount of sales of products in Oklahoma and list the names of those who bought items. Presumably, that would allow the state to go after the buyers to send in their sales tax.

“It’s a huge benefit to cities and towns,” Dugger said, noting that many municipalities add sales taxes on top of the state’s 4.5 percent levy. “Most counties depend on this.” He estimates the state could pick up another $20 million to $40 million annually to add to its current $6.8 billion budget.

Dugger’s bill made it out of a Senate committee by just a one-vote margin last month, but he’s optimistic that the full Legislature will pass it, despite the close committee margin and that Republican Gov. Mary Fallin, who has indicated her support, will sign it. Opponents did not express concerns about the bill’s intent, but said they were worried about whether the collection of taxes and showing where buyers shopped would create internet privacy issues.

In Kansas, legislation passed a House panel last week and now moves to the full House for a vote on whether to require sales tax collections from businesses that conduct at least 100 transactions or $50,000 annually in sales.

And in Idaho, the Senate is about to consider legislation that would require online sellers to collect and remit state sales taxes if they do more than $10,000 in business in the state. Rep. Lance Clow, a Republican who sponsored the bill, which passed the House last month, estimates that it could bring in $22 million to $37 million a year.

Clow said that if the Supreme Court rules in South Dakota’s favor, then his bill in Idaho would be constitutional as well. The bill would take effect July 1, pending the court decision, and would give everyone time to figure out the new law before the court rules.

Opponents such as Rep. Vito Barbieri, a Republican from northern Idaho, opposed the bill because he said the state doesn’t need more money. In addition, he believes there should be some connection between the companies being taxed and state services.

"There’s got to be a nexus — there’s got to be some connection — between the company and the tax," he said, noting that when local stores remit taxes they get state government services in return, unlike remote sellers. "We are trying to dissolve this statutorily because we are looking for new sources of revenue. It’s too bad, but the only way to slow spending down on the state or federal level is to cut off the funding."

The idea of collecting new sales taxes is wildly popular among the states. Thirty-five states filed amicus briefs on South Dakota’s behalf with the Supreme Court, as did the National Governors Association, the National Conference of State Legislatures, the National Association of Counties and the U.S. Conference of Mayors. All argue that current law is keeping them from collecting taxes on what is rightfully theirs — sales of products coming into their state.

“The devastating effect on State and local economies is two-fold,” the NGA and others wrote in their amicus brief.

“First, the physical nexus requirement results in a loss of crucial revenue from owed taxes that State and local governments depend on to fund basic government functions,” the brief says. “Second, it disadvantages in-state brick-and-mortar retailers, who do not have the same luxury of avoiding their sales and use tax collection and remittance responsibilities.”

The only major opposition among the amicus briefs, often known as “friend of the court” briefs, comes from NetChoice a trade group of online retailers that includes such behemoths as Google, eBay and Overstock.com as well as smaller retailers. The organization argues that assessing and collecting sales taxes from the 45 states that assess a sales tax is too complicated and would disproportionately hurt the little sellers.

In Nebraska, legislation to collect state sales taxes on internet purchases is moving forward, despite opposition from GOP Gov. Pete Ricketts, who argues the state should wait for the Supreme Court to act. Undaunted, the state’s unicameral Legislature advanced the bill on a 35-8 vote, more than the 30 votes needed to override an anticipated veto by the governor.

Ricketts, in a statement, said the bill is “flawed and contains burdensome regulation and unnecessary red tape on companies doing business in Nebraska.”

NetChoice, in a letter to Nebraska senators, cautioned that the bill would “violate the privacy expectations of Nebraska citizens … the state would know they are buying from vendors whose names reveal sensitive private information, such as medical conditions, financial problems, sexual preferences, and political beliefs.”

Carl Szabo, NetChoice’s vice president and general counsel, said his group has also been making the argument in states that taxing internet sales would burden small sellers with thousands of tax rules from 12,000 jurisdictions and subject them to audits from 45 states and the District of Columbia. He used his mother as an example, saying that her small internet jewelry company would be unable to figure it all out. “The suggestion that there is software do to it, misses all the costs that come with integration, categorization and simply understanding how to do it.”