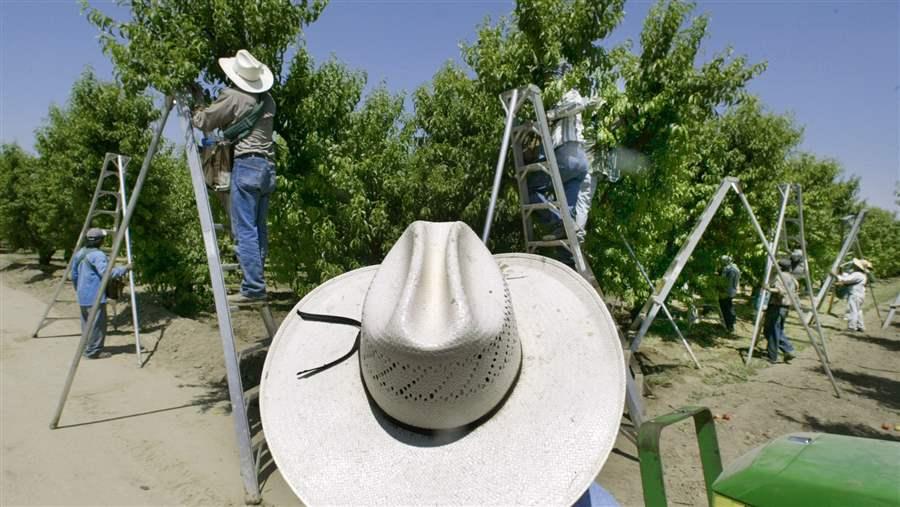 Workers pick fruit at a farm in Arvin, California. Some states are considering banning the pesticide chlorpyrifos due to the dangers it presents to humans and the environment.

A month after Scott Pruitt began leading the U.S. Environmental Protection Agency, the former Oklahoma attorney general rejected an Obama-era recommendation from agency scientists to ban a widely used pesticide from use on food crops.

That means farmers can continue to spray chlorpyrifos on crops ranging from corn to cranberries. The change was welcomed by farm groups and the U.S. Department of Agriculture, which said farmers need access to the chemical to stop infestations.

But environmentalists, who had been working for years to get the Obama administration to crack down on the pesticide, were outraged. And officials in several states — all led by Democrats — now say that if the federal government won’t force the pesticide off their lands, they will. Seven states have sued the EPA over Pruitt’s decision. In at least four states, legislators have filed bills to ban the product.

“If it’s not going to be done federally, we should do it at state level,” said Maryland Del. Dana Stein, a Democrat who introduced a chlorpyrifos ban. “This is the tactic. It’s the only available option.”

The chlorpyrifos quarrel is yet another skirmish in what is likely to be a yearslong battle between blue states and the Trump administration’s EPA. Already, Democratic-run states say they will sue over rollbacks of Obama-era regulations and crack down on fossil fuel polluters.

Caught in the middle of the chlorpyrifos debate are farmers such as Stephen V. Lee IV of New Jersey, a sixth-generation cranberry farmer who says the pesticide can save crops from serious infestations when no other chemical is working.

Lee testified against a chlorpyrifos ban bill in his state last year, telling legislators he had used the substance only three times in the past decade.

“It’s like the fire extinguisher or the red button,” Lee said in an interview. He said he only uses chlorpyrifos when his existing pest management practices don’t stand up against a bug. The bill has been reintroduced this year.

Chlorpyrifos is used on a wide range of agricultural products, designed to kill nearly any bug that comes into contact with it. When Lee went to use it against mirid bugs, which pierce plants and suck out their juices, leading to death and decay, he had to wait until bees left his field before he could spray. 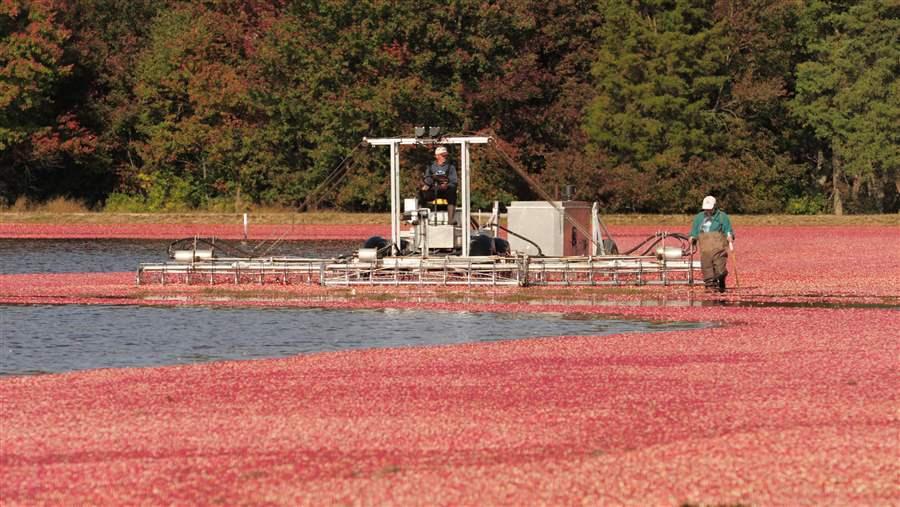 Herbert Armstrong and William Campbell operate a cranberry picker during the harvest season at Lee Brothers Inc. in Chatsworth, New Jersey. Stephen V. Lee IV said he’s only used the pesticide chlorpyrifos a few times in the many years he’s run the farm.

The Obama administration had targeted chlorpyrifos, known on the market as Lorsban, to be phased out after EPA scientists recommended a ban on the pesticide in 2016, citing health effects on farmworkers and children.

Scientists worry that it affects the human nervous system much like it attacks those of insects. The substance was banned for household use in 2000, and studies found children who had been exposed to it had lower IQs than those who were not. The pesticide has also been linked to learning and memory issues and prolonged nerve and muscle stimulation.

In his ruling, Pruitt said the science is inconclusive and that the agency plans to continue studying the effects of chlorpyrifos.

Lynn Goldman, the head of George Washington University’s Milken Institute School of Public Health and former administrator of the EPA’s pesticide office under President Bill Clinton, said scientists would have reviewed outside studies as well as data from Dow, the company that makes chlorpyrifos, in order to be confident in their findings.

“It is unprecedented for an EPA administrator to overrule the scientific judgement of EPA’s pesticide office,” Goldman said in her testimony to the Maryland Legislature. “The only possible basis for such a decision is political.”

The EPA did not respond to questions about the state-level bans, but at the time of the decision, the EPA released a statement from the Office of Pest Management Policy in another agency, the USDA, saying the decision was “grounded in evidence and science.”

Dow did not respond to a request for comment.

This year, lawmakers in Maryland, New Jersey, Hawaii and Vermont are considering bills that would ban the use of chlorpyrifos, and a bill in Minnesota urges the EPA to reconsider its decision. The legislation pits environmental scientists against chemical purveyors and conventional farmers against organic ones.

Even if conventional farmers don’t use chlorpyrifos regularly — its use has declined fairly steadily since the early 1990s due in part to a turn to pest-resistant genetically modified corn — many say they still need access to it in worst-case scenarios. 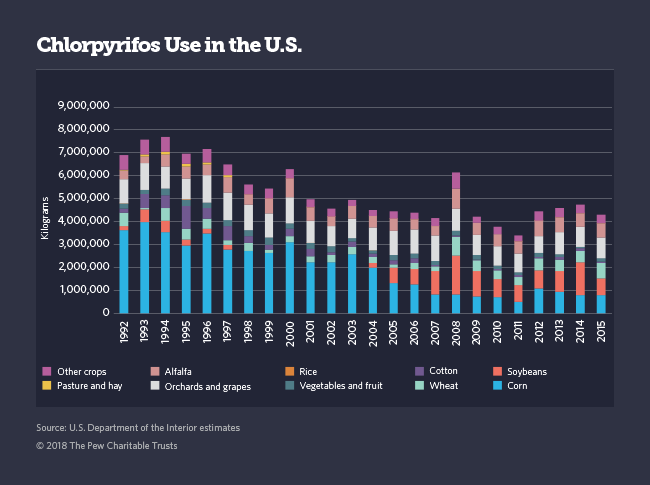 People who spray such pesticides have to have a license from the state and wear a specially fitted mask. Workers must stay out of the fields where chlorpyrifos has been sprayed for at least 24 hours and up to five days for some crops.

The 17-page label that comes with the product spells out strict guidelines for its use that were developed by the EPA, including how soon before harvest the product can be used. For Lee’s cranberry fields in New Jersey, chlorpyrifos can’t be used within 60 days of harvest.

Lee is not an EPA basher. He wants the agency to keep studying chemicals to make sure they’re safe. But he’s not nervous when he uses chlorpyrifos.

“It’s kind of like asking a police officer if they get nervous when they go to work every day,” Lee said. “When I apply material it’s a serious business. I’ve been properly trained and certified; I go to continuing education, and I’ve got guidelines from the EPA that I follow. So no, I’m not nervous.”

But it’s not just farmworker health that opponents are worried about. They cite health risks to the general population and the environment as the chemical continues through the food chain and makes its way into water.

“For terrestrial organisms — birds, owls, things like that — it’s generally not considered very toxic. However, once it gets in the water, it’s a neurotoxin for all crustaceans or arthropods, things with joined legs, insects, crabs, that sort of thing,” said Doug Myers, Maryland senior scientist with the Chesapeake Bay Foundation. “You start messing with Maryland crabs, and that’s poking a fight.”

Cleo Braver was one of many organic farmers who came to a recent hearing on Stein’s bill in Maryland to talk about alternatives to chlorpyrifos — organic pesticides for some bugs, nematode parasites for others.

“There are plenty of alternatives,” said Braver, who grows vegetables on her farm in Easton. “There are fantastic databases that you can even pull up on your phone in the field. Farmers who want an alternative to chlorpyrifos can search by either the crop you use it on or the pest they want to use it against.”

Conventional farmers in Maryland, however, argue the pesticide might be the last weapon against pests such as the spotted lantern fly, which they worry could be a major threat to the state’s vineyards.

“It will wipe out 90 percent of a vineyard,” said Colby Ferguson, the director of government relations of the Maryland Farm Bureau Inc. “The spotted lantern fly is a bad, bad dude, and if Maryland eliminates chlorpyrifos, that would be eliminated as a last line of defense.”

It’s the testimony from conventional farmers who talk about the risks of losing an entire crop to bugs that makes legislators wary of a ban.

New Jersey state Rep. Shirley Turner, a Democrat who has sponsored a bill  to ban the pesticide the last two years, said testimony like Lee’s makes legislators cautious. She expects better luck this year with more Democratic legislators and a new Democratic governor.

“Legislators didn’t feel competent about it to make a decision, particularly after a farmer said it saved their crop,” she said.