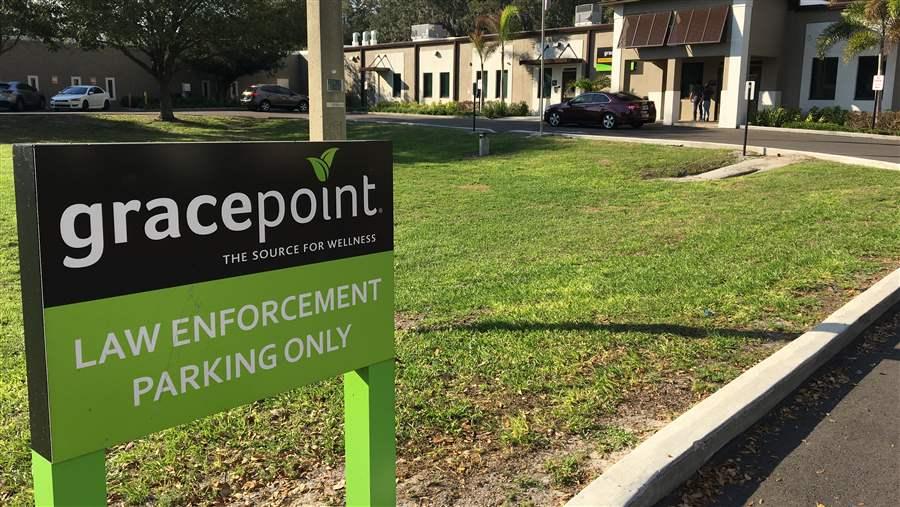 Gracepoint central receiving center in Tampa, Florida, is a secure facility where police can take people in crisis because of a mental health condition or drugs and alcohol. In many parts of the country, first responders have few options when it comes to finding follow-up care for people who have been rescued from a drug overdose.

TAMPA, Fla. — In an opioid epidemic that is killing more than a hundred Americans every day, many families of overdose victims feel helpless when it comes to convincing their loved ones to seek treatment.

Police and other first responders — who often rescue the same people again and again — are similarly frustrated about their lack of authority to detain users long enough for their heads to clear so they can consider treatment.

Police use the Marchman Act to pick up people without a court order and take them to a designated stabilization and assessment center. Addiction professionals use the law when a patient fails to show up for treatment. And parents and friends use it when they fear a loved one’s life is at risk.

Across the country, state lawmakers are grappling with how to give first responders and medical professionals the same kind of legal leeway — without violating drug users’ civil liberties.

“It’s been one of the most hotly debated opioid issues of the past year,” said Sherry Green, a consultant and former legal analyst with the National Alliance for Model State Drug Laws.

Tampa’s success with the Marchman Act could be a model.

More than 400 people in Tampa and surrounding Hillsborough County were involuntarily committed into addiction assessment and treatment last year, according to circuit court records. More than two-thirds completed their court-ordered programs.

That’s a success rate that substantially exceeds the 50 percent threshold most researchers use in determining whether an addiction treatment is effective, said David Gastfriend, senior research scientist at the Public Health Management Corporation in Philadelphia.

Nearly 12 million Americans have an addiction to opioid painkillers and heroin, according to the most recent survey from the Substance Abuse and Mental Health Services Administration. Only 1 in 5 are receiving treatment.

A shortage of treatment capacity is part of the problem, addiction experts say, but denial and refusal to seek treatment is the primary reason. The vast majority of Americans with a drug addiction do not receive treatment because they say they do not need it.

Research also shows that people who are coerced into treatment either through criminal courts or employer or family intervention are just as successful at beating their addictions as those who voluntarily enter treatment.

That’s why governors and lawmakers want to find legal methods to push people into treatment in the vulnerable moments after they’ve been rescued from an overdose and are in contact with police and medical professionals who can help.

At least 33 states have laws that technically allow loved ones and others to involuntarily commit people who put their lives at risk by using drugs, according to the National Alliance for Model State Drug Laws. But since they can only be implemented with a judge’s approval, typically during business hours, commitment laws have been largely ineffective at preventing people who are rescued from an overdose from walking away, using drugs again and overdosing.

Florida has the oldest law authorizing emergency detention for drug and alcohol users without court involvement. Colorado and Minnesota have similar emergency commitment statutes, and a handful of other states have emergency provisions on the books that are seldom used, according to Green. 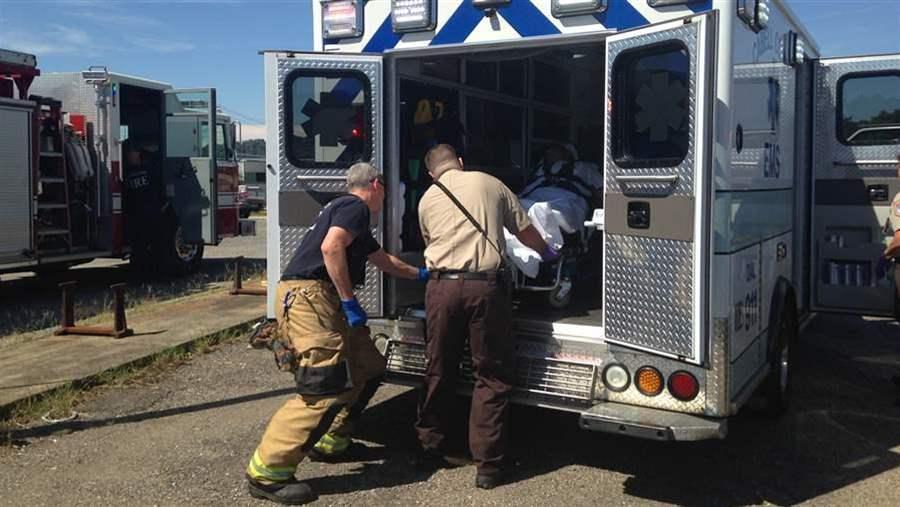 Emergency medical personnel load an overdose victim into an ambulance in Huntington, West Virginia. Nationwide, an increasing number of people who are rescued from a drug overdose refuse to be transported to a hospital.

“There’s a great deal of frustration among first responders who revive or resuscitate individuals and then watch them get up and walk away,” said Kentucky state Rep. Kimberly Moser, a Republican.

Under a bill Moser proposed last month along with four other Republican House members, first responders would have the authority to sign a 72-hour noncriminal “detention order,” requiring an overdose victim to be transported to a hospital or treatment facility to be held until an addiction assessment is completed and a treatment plan developed.

Moser’s bill would complement, but not amend, an existing civil commitment law in Kentucky. Casey’s Law has been used successfully by hundreds of families for more than a decade to coerce loved ones with dangerous drug addictions into treatment. That law requires a court proceeding, which can take days or weeks.

In Massachusetts, a similar emergency commitment bill, which Republican Gov. Charlie Baker first proposed in 2015, would allow medical professionals and first responders to detain patients who have been revived from a drug overdose and transport them to a specialized addiction facility for emergency assessment and treatment.

Baker’s proposal would amend the state’s existing court-involved civil commitment law (known as Section 35), and give designated receiving facilities up to 72 hours to engage patients in treatment.

Opposed by major medical groups as well as the American Civil Liberties Union, the Massachusetts bill is part of the governor’s comprehensive plan to stem the state’s raging opioid epidemic.

Last year, Indiana enacted a law calling for limited use of emergency commitment in three counties for people who are revived from a drug overdose. The program, still in the development phase, requires counties to keep records on how many patients are committed, what type of treatment they receive, and how many are completing treatment.

Critics in Indiana, Kentucky and Massachusetts argue that a shortage of treatment slots would make it difficult to find a facility capable of emergency care.

“One of the frustrations is that people who voluntarily seek treatment often can’t access care when they need it,” said Dr. Sarah Wakeman, who heads addiction services at Massachusetts General Hospital. “I wouldn’t suggest that involuntary treatment is the way to go.”

Florida has long had a disproportionate share of the nation’s rehabilitation centers and residential addiction treatment facilities, but as the opioid epidemic worsens, the state’s treatment capacity has been stretched thin.

Still, the state has designated a handful of treatment facilities to accept Marchman Act patients in Hillsborough County. Professionals at those places say they rarely have to turn away a patient because of a lack of capacity.

“We may not be able to give them the level of service they need, particularly if they need a bed,” said Mary Lynn Ulrey, CEO of DACCO, a community-based treatment service provider here in Tampa. “But we immediately engage them in an appropriate level of service and move them into a more intensive level of service within a few days.”

Tampa is one of only four places in Florida with a locked central receiving facility where police can take adults and children with mental illness and addiction and have them evaluated for treatment.

Elsewhere in Florida and in much of the country, hospital emergency departments, crisis centers and addiction treatment centers serve as the first stop for police who rescue opioid users from an overdose. Many of those places are unlocked and ill-equipped to perform an emergency addiction assessment on an unwilling drug user.

In Kentucky, Moser said the state plans to use federal and state grants to create secure triage centers in rural areas where there are no hospitals or addiction treatment centers within 50 miles.

And in Massachusetts, at legislative hearings on Baker’s emergency commitment proposal, physician groups and hospitals argued that in many parts of the state there would not be enough room at local hospitals and treatment facilities.

Here in Tampa there’s little mystery why the Marchman Act is more widely used than anywhere else in Florida. A circuit judge here, infamous among some drug users who weren’t quite ready to quit, has dedicated his career to helping people with addictions find treatment and turn their lives around, whether they want to or not.

When he’s not hearing Marchman cases, Judge Jack Espinosa Jr. is presiding over drug courts, family courts and juvenile cases. And he does everything in his power, addiction professionals say, to ensure that people who are ordered into treatment stay there.

Marchman Act orders are civil proceedings. Police don’t arrest the people they pick up under the law’s emergency powers. Instead, they bring them to health care professionals who stabilize and assess them to determine the nature and severity of their addiction.

Once a health care professional has recommended a treatment plan — which can range from six months of outpatient counseling with medication to three days of detox and 30 days of residential treatment at an average cost of $5,500 to $7,000 — Espinosa is then asked to order the person to complete it.

If a patient doesn’t show up for treatment on any given day, a sheriff’s deputy is sent to pick the person up. “I use the common law powers of contempt of court to enforce the order,” Espinosa explained.

“We have better outcomes with our Marchman Act patients than with any of our other patients,” said Linda Mann, an addiction specialist at DACCO. “They know Espinosa will send the sheriff around. That gives us leverage we don’t have with our other patients.”