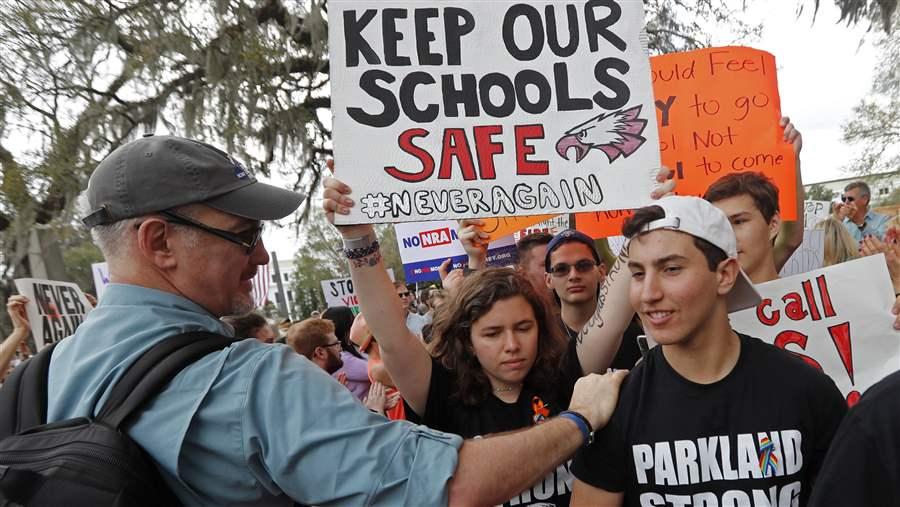 Student survivors from Marjory Stoneman Douglas High School are greeted as they arrive at a rally for gun control reform on the steps of the state Capitol, in Tallahassee, Florida. No one really knows how often students are caught with guns at school because there is no good national data.

Editor's Note: This article was updated March 5, 2018 to correct a federal statistic. It captures the percentage of students who reported bringing a weapon to school in the past month, not a firearm.

One day after a Florida teenager walked into his former high school and carried out one of the deadliest school shootings in U.S. history, at least seven other teens across the country walked into school with a gun.

The firearms were seized without harm in Arizona, Florida, Maryland, Missouri and Texas, according to local news reports. Such incidents fuel the widespread fear that students often bring guns to school. But there’s no way to tell if this is true. There is no good data.

Because of lax reporting by schools and lax oversight by state and federal authorities — and despite federal law — it’s nearly impossible to say just how many students get caught taking firearms into public schools each year.

When a student is caught with a gun at school, the 1994 Gun-Free Schools Act requires schools to report the incident to the school district, which is supposed to pass the information along to state education officials, who then are supposed to send it to the U.S. Department of Education. The idea behind the reporting requirement is to make it possible to detect trends and inform policymakers as they seek to address the problem.

But much of the information on the Education Department’s website is either outdated or inconsistent with state data. The department did not follow up to multiple questions and requests from Stateline for new and more comprehensive data.

In the past few years, school and state officials have not properly tracked deadly school shootings in Arizona and Colorado, and firearm-related school incidents in Maine. State education officials there say that while they collect statistics, they don’t enforce the reporting requirement.

In Maine, Democratic state Sen. Rebecca Millett said she wants to require the state’s Education Department to submit gun incident information to the Legislature each year, so lawmakers can ensure that the state is tracking the information accurately and can use it to make policy.

“We need to understand the nature of what we are facing,” she said.

U.S. students were caught with a firearm at school at least 1,576 times during the 2015-16 school year, according to a federal database with information collected from states through the Gun-Free Schools Act.

This data is incomplete, though. The federal numbers are lower than the numbers recorded by at least five states — Iowa, New Jersey, Maine, Maryland and Washington — in recent years, according to a Stateline review.

In Iowa, 15 firearm incidents were recorded in 2015-16. Only one shows up in the federal database. Iowa education officials did not respond to a follow-up question about why the state and federal data are different.

Mike Donlin, program supervisor for the school safety center at the Washington department of education, said he wasn’t sure why the numbers were different.

There are a few carrots and absolutely no sticks for local school districts to give data to the states, Trump said.

The best effort to track guns in schools might come at the local level, Trump said, but some school administrators might be reluctant. “There are some that believe that, ‘No data, no problem, but if there is data, we have to do something about it.’ ”

School administrators may try to keep firearm incidents under wraps, Trump said, to protect the school’s image, or their own.

“If their school comes in with numbers higher than a school on the other side of town,” he said, “those administrators may seem to be better at keeping the school safe, when in reality, they may have a less-safe school, they are just not honestly reporting.”

The 1994 Gun-Free Schools Act also requires students who bring guns to school be expelled for at least a year in most cases, but some gun advocates say it isn’t the federal government’s place to make such judgments.

States and local school systems should be the ones to decide whether students may bring guns to school, said Michael Hammond, legislative counsel at Gun Owners of America.

“When I grew up in the 60s in an inner city high school in Kansas City, I was in ROTC,” Hammond said. “I was issued an M-1 semiautomatic rifle when I was 13 and would walk back and forth with it on the playground. No one thought I’d shoot up the school.” 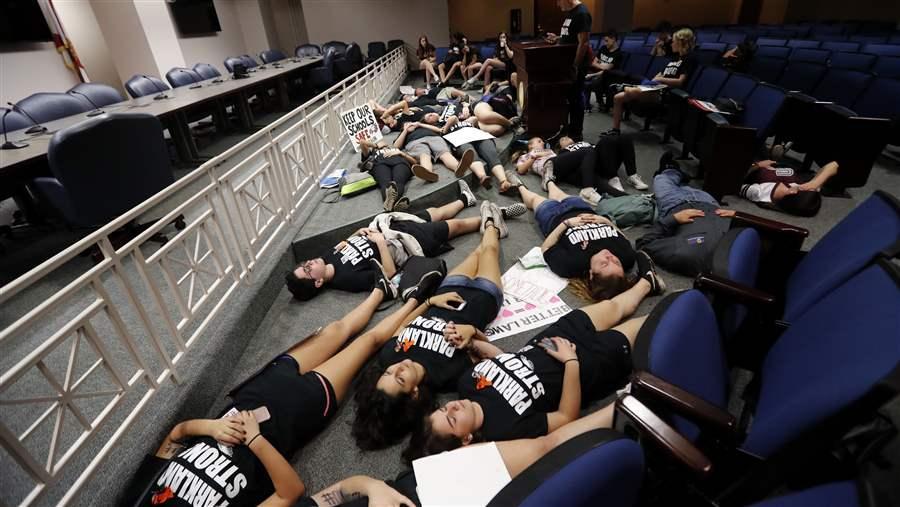 Seventeen student survivors from Marjory Stoneman Douglas High School lie down on the floor in silence and pray at the approximate time of the attack last month, inside the state Capitol, in Tallahassee, Florida.

The U.S. Department of Education used to publish much more detailed annual reports, including how many times students were caught with guns, the related punishment, and the rate at which school systems in each state recorded the information. But the agency’s most recent comprehensive report covers the 2006-7 school year.

“Unfortunately, the latest data we have is quite old,” said Jo Ann Webb, a department spokeswoman.

In Arizona, the Department of Education hasn’t felt confident about its data for years, said Stefan Swiat, a department spokesman. The agency still receives information from schools, but it’s not complete.

The last year the Arizona school system knew it was getting comprehensive information from school districts was 2009, he said. That’s because, for a few years, the state had federal funding for a school crime-tracking program that also allowed the state to require local school systems to submit the data.

It’s crucial for the state to have comprehensive data so it can identify trends and have smart policy discussions, said Arizona state Rep. Daniel Hernandez, a Democrat.

Hernandez, who is also a board member at his local school district in Tucson, said his school district tracks firearms seized at schools, but that other districts track it differently.

Unlike other states, in Washington, state officials are fairly confident they are accurately tracking how many times students bring guns to school, said Donlin, with the state’s school safety center. State officials comb through the statistics looking for trends and spikes, such as when copycats come out after school shootings. They then work with school communities and law enforcement to mitigate future events.

‘Watch Me Be Cool Today’

High school students clearly are bringing guns to schools at a much higher rate than is characterized by the federal data, a national survey shows. About 4 percent of high school students say they brought a weapon to school at least once in the past month.

Many times, school resource officers, sworn officers who work in schools, are the first to hear about guns on school grounds, said Mac Hardy, director of operations for the National Association of School Resource Officers.

Students hear about rumors and social media posts and report it to the officers, Hardy said. Many times, students will bring a gun to school if they are being bullied, to appear tough to their tormentor. Most of the time, the gun is not loaded, or it’s a replica gun, such as an airsoft gun, he said, but it still creates a dangerous situation.

In Washington state, Donlin said sometimes students bring firearms to school for innocent reasons; perhaps they went hunting and forgot to take the gun out of the car. But there has been a recent uptick in students bringing guns for more troublesome reasons.

“Sometimes it’s real,” he said of the threats. “Sometimes it’s, ‘Watch me be cool today,’ or ‘I have a test tomorrow, it’s a good time to pull out my gun trick.’ ”

School communities need to act on these incidents, he said.

“ ‘See something say something’ is a simple thing to say, but it can be really effective,” Donlin said. “And the next step is: Do something — don’t just let it slip by.”