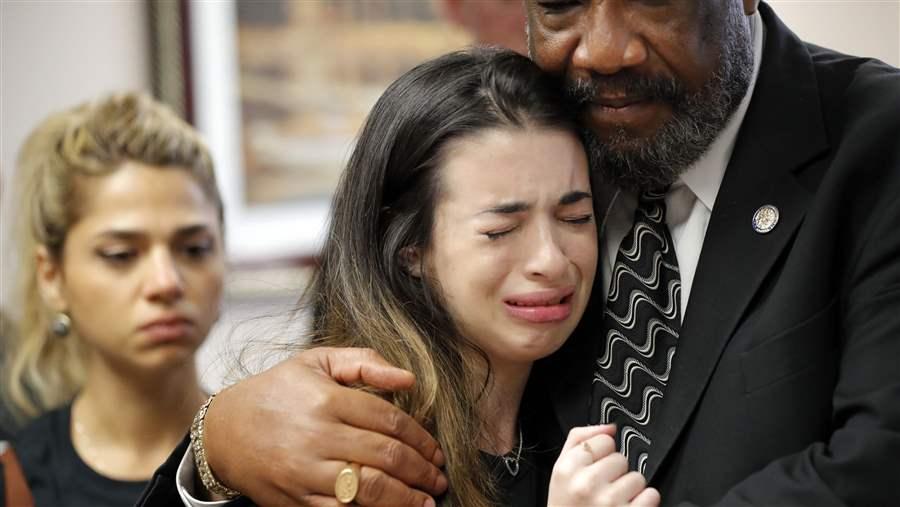 After 17 people were killed at a high school in Parkland, Florida, gun control advocates say they have momentum to enact new state laws. But in the years since the massacre in Newtown, Connecticut, more state laws have actually expanded access to guns.

In the two weeks since the Florida school massacre, state lawmakers around the country have introduced bills to ban bump stocks, ban assault weapons, and expand background checks — and also to arm teachers, lighten penalties for carrying without a permit, and waive handgun permit fees.

If history foretells, the gun-rights bills will have a better chance at success. In the years since Sandy Hook, when 26 were slain in 2012, states have enacted nearly 600 new gun laws, according to data compiled separately by the National Rifle Association and the Giffords Law Center to Reduce Gun Violence.

Nearly two-thirds of those were backed by the NRA.

It is “indisputably true” that there have been far more new laws that loosen gun restrictions than tighten them, said Michael Hammond, the legislative counsel at Gun Owners of America, a Virginia-based “no compromise” gun lobbying organization. The way a state reacts to mass shootings depends on who controls its legislature, he said. And in the case of the states that expanded access to firearms, most were controlled by Republicans.

“If you are in favor of the Second Amendment, grow up with guns, are comfortable with guns, don’t want to see kids turned into sitting ducks, you’re more likely to say the solution is more guns,” Hammond said.

By the NRA’s count, governors since 2013 have enacted 382 “pro-gun” bills — many widely expanding access to firearms.

After the latest massacre in Florida, Indiana lawmakers are close to making their state the next that allows people to carry guns on church grounds, even if there is a school on church property. Jack Sandlin, the Republican state senator who wrote the bill, said it’s “common sense” to want to pass this kind of legislation after mass shootings.

“People want to know how to protect themselves and protect their families,” Sandlin said. Before being elected to public office, he spent 35 years in law enforcement.

Also in the past five years, 210 “gun safety laws” were enacted in 45 states, according to the Giffords Law Center, a nonprofit named after former U.S. Rep. Gabrielle Giffords, an Arizona Democrat who survived an assassination attempt in 2011.

“Sure, if you count every one of those little BS things that the corporate gun lobby has put out that you can say has weakened gun laws, it’d probably be a losing tally for us,” Gross said. “But when you look at it through the lens of what states have done to make them meaningfully safer, you can make a strong case that momentum has shifted.”

Since Sandy Hook, states such as Colorado, Delaware, New York, Oregon and Washington have expanded background checks for gun purchases.

Unlike NRA-backed legislation that is passed mostly in red states, these measures are being passed in both blue and red states, said Allison Anderman, the managing attorney at the Giffords center.

“The NRA is not getting permitless-carry and campus-carry laws enacted in true blue states like California, New Jersey, Connecticut or New York,” she said. “Whereas we’re getting laws that we think are extremely impactful in states like Alabama and Louisiana. How many people would have been shot and killed if we hadn’t passed those bills?”

What States Will Do Now

Gun control activists say there is clearly a momentum right now. Rhode Island Gov. Gina Raimondo, a Democrat, signed a “red flag” executive order this week that keeps guns away from people “who pose a danger to themselves and others.” Similar measures are being considered in Illinois, Maryland and New Jersey.

Florida Republican Gov. Rick Scott proposed raising the age to buy assault rifles — a move that was also called for this week by President Donald Trump.

But even with this action, many states are far from enacting new gun restrictions. Already, some states are struggling to pass bills that would ban bump stocks, the devices that allow assault weapons to fire continuously. The Las Vegas gunman used a bump stock to quickly shoot more than 500 people.

States such as Idaho, Kentucky and South Dakota are now considering measures to further loosen gun laws in the wake of the Florida shooting.

In Arizona, a state with some of the least restrictive gun laws in the country, lawmakers are unlikely to pass new restrictive bills, said state Rep. Daniel Hernandez Jr., a Democrat. He interned for Giffords in 2011, and he was there when she and 18 others were shot in the parking lot of a supermarket in Tucson. He came to her aid and is credited with helping save her life.

Hernandez said it’s hard to pass restrictive gun bills in Arizona because of strong opposition from special interest groups, such as the Arizona Citizens Defense League, but also because guns are a part of the state’s history and culture.

“There is this idea,” he said, “that with our gun culture, we can’t upset the apple cart, we can’t change it, because for so many people this is a part of their tradition.” Indeed, according to a 2015 survey, just one-third of Arizonans want stricter gun laws.