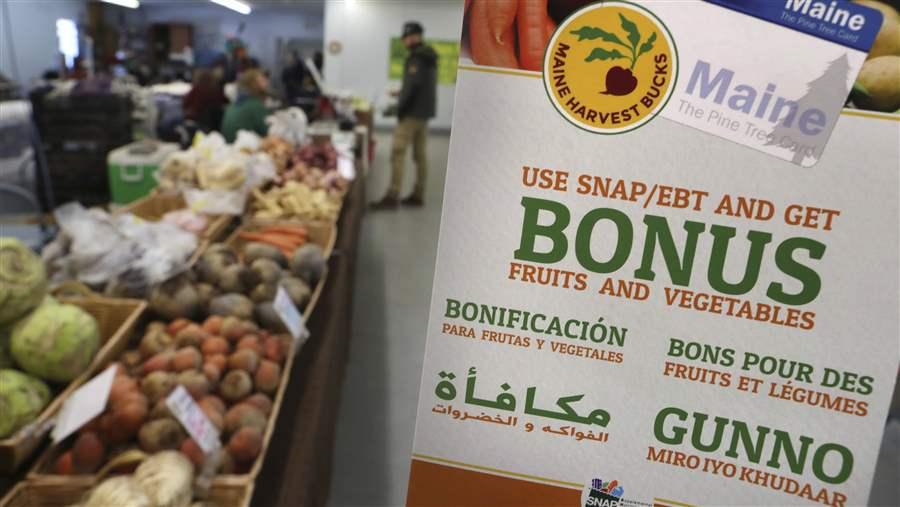 Cities and states are trying new ways to entice food stamp recipients to eat their fruits and vegetables.

One approach that’s gaining popularity: offering rebates to low-income families when they buy fresh produce. A program in Massachusetts was so popular that it ran out of rebate money and had to be suspended.

Buying fresh fruits and vegetables can be expensive — especially for families trying to live on $126 a person, the average monthly food stamp benefit in 2017. That’s $1.40 for a meal.

But even as food advocates are trying to make these programs work, they worry that efforts underway in Washington could eliminate them.

President Donald Trump this month proposed slashing benefits under the federal food stamp program by nearly 30 percent. To help cut costs, food stamp recipients would get a box of canned and packaged goods rather than using their benefits to choose their own food — an idea that food security researchers and advocates say would be a logistical nightmare.

Trump’s proposals “are about saving money for purposes other than public health,” said Marion Nestle, a professor of nutrition, food studies and public health at New York University. “But surely public health is a public good worth supporting?”

And that has advocates worried. While presidential budgets routinely are considered “dead on arrival” in Congress, lawmakers are at work on a new farm bill, which would provide funding for the food stamp program, known as the Supplemental Nutrition Assistance Program (SNAP) and the FINI grants.

The FINI program was created by the 2014 farm bill, and Congress appropriated $100 million for the program, to be doled out over a four-year period, through 2018. Programs that get FINI grants all offer incentives to low-income shoppers, such as coupons or loyalty cards. Typically, for every dollar spent on produce, shoppers get another dollar to buy more later.

The program operates in 39 states, but data on how many programs are running nationwide or how many food stamp recipients it serves is not available, said Selina Meiners, a USDA spokeswoman.

FINI grants to cities and states range from $100,000 for small-scale pilot projects to several million dollars for large-scale projects. Sometimes the money goes to nonprofits and farmers markets that work with state agencies that administer the food stamp program; sometimes it goes directly to state-run initiatives. And sometimes local governments and nonprofits match the federal funding.

Eliminating federal funding for the food program “would have huge consequences,” said Julia Koprak, a senior associate at the Food Trust, a Philadelphia-based nonprofit funded in part by a FINI grant.

Early evaluations of FINI projects show benefits. An April 2017 report by the Farmers Market Coalition, a Pennsylvania-based advocacy group, found that in 2016, around the country, households on food stamps that were enrolled in the program consumed 16 million to 32 million additional servings of fruits and vegetables. The report found the program generated an estimated $14.3 million in economic activity for participating communities.

But food advocates worry that might not be enough to sway Congress.

“If budget cutters insist on definitive proof,” she said, “it’s not possible to give it to them.”

FINI got its start in 2014, but the idea of helping low-income Americans spend more of their food dollars on fresh fruit and vegetables has been bouncing around for a while.

About a dozen years ago, a handful of farmers markets in Harlem, the South Bronx, and Takoma Park, Maryland, began offering coupons to food stamp recipients so they could buy more produce.

And in 2008, the farm bill provided $20 million for pilot programs around the country that encourage low-income families to eat more fruits and vegetables.

Massachusetts and Michigan were among the first states to try out that hypothesis on a formal basis, and the success of those pilots prompted Congress to create FINI in 2014.

In 2009, Detroit started offering food stamp recipients “Double Up Food Bucks” to buy fresh fruit and vegetables at five area farmers markets. The program has now grown to 150 sites across Michigan and has served over 300,000 families.

The Michigan program was able to expand when the USDA in 2015 awarded its administrator, the nonprofit Fair Food Network, a $5 million FINI grant, which was then matched by a private funder.

A Massachusetts program in 2011 started giving food stamp recipients 30 cents for every dollar they spent buying produce from local farmers.

The program proved to be successful: Participants spent more on fresh produce — and ate more fruits and vegetables.

So last year, with a three-year, $3.4 million FINI grant, Massachusetts expanded the program. Some 35,000 households across the state snapped up nearly all of the matching funds within the year.

Because officials had run through most of the money two years ahead of schedule, the state will temporarily suspend the program from mid-April to July, according to the state’s Department of Transitional Assistance.

While the program is suspended, food stamp recipients can still use their benefits to buy produce at farm stands — just without the rebate.

Once they’ve signed up, the recipients use loyalty reward cards to access rebates that double the value of the money they spend on produce. Some people are randomly selected to receive even more benefits, up to $40 a month.

Last year, 1,153 food stamp recipients signed up for the program. This year, the goal is to sign up another 2,000, said Joe Prickitt, senior director of the Southern California Nutrition Incentive Program at UC San Diego Center for Community Health, which runs the program.

The program helps those who get food stamps while spurring on the local economy, providing jobs to retailers, food growers and food distributors, Prickitt said. “This is much, much bigger than just providing money to SNAP recipients.”