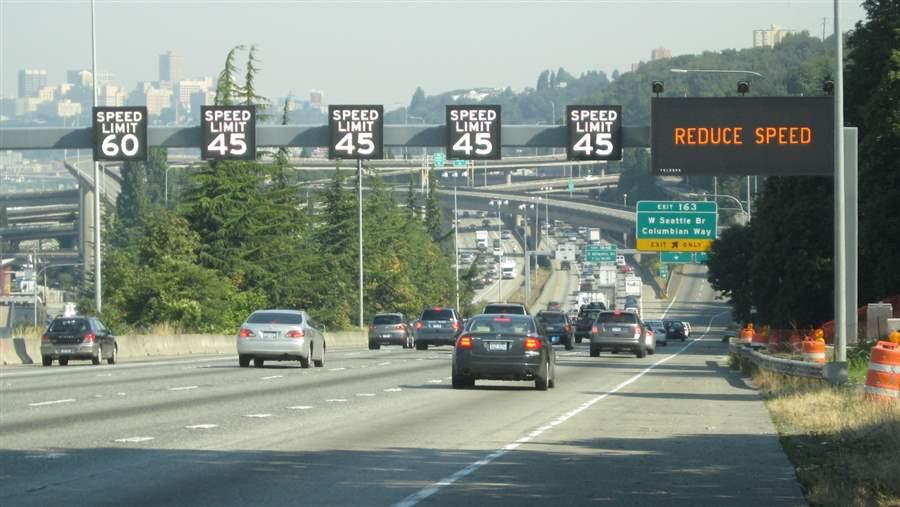 Courtesy of the Washington State Department of Transportation

When nasty weather or heavy traffic congestion pops up ahead, drivers in a growing number of states may see electronic signs showing speed limits that are lower than usual.

The idea behind these variable speed limits, which can change depending on road, weather or traffic conditions and can get lower as drivers reach the problem area, is to make traffic flow more smoothly and give drivers more time to react to changing conditions. That would help prevent accidents such as rear-end or lane-changing collisions.

Some states say the high-tech systems have helped curb congestion and make the roads safer. But some critics question whether the costly technology is worth the investment, while others view the signs as speed traps. At least one state — Missouri — dumped variable speed limits after drivers and law enforcement gave them a thumbs down.

“There are a lot of pros and cons,” said Amy Ford, a spokeswoman for the Colorado Department of Transportation, which uses variable speed limits primarily when there are crashes. “The trick is getting drivers to comply and understand the idea of smoothing out speeds. It’s a difficult concept to try to communicate to people.”

More than a decade ago, only a small number of states used variable speed limits. Today, at least 15 states, from Maine to Washington, deploy them on certain highways when there is congestion, inclement weather or both.

Here’s how they work: Road sensors gather information about traffic speed, volume, weather and road conditions. The data is transmitted to a traffic operations center and analyzed using an algorithm or a review by staffers, who make decisions about what speed limits should be posted.

In some states, transportation officials have the authority to decide whether to adopt these changeable speed limits on their own. In others, they need legislative approval.

Last year, the Ohio Legislature authorized the state transportation department to use them in certain locations for inclement weather or congestion. And during a November storm, the agency deployed variable speed limits on an interstate near Cleveland.

In South Dakota, the state House last month passed a measure that would have allowed temporary variable speed limits on some interstates, but it died in the Senate last week. Some senators felt the signs were unnecessary or unfair to motorists who may miss them and get penalized because they didn’t know they were speeding.

In Wyoming, which started using them in 2009 during winter storms or vehicle emergencies, the changeable signs made a “dramatic difference” within a year, said Vince Garcia, a state Department of Transportation program manager.

“We have a lot of severe weather conditions and we were consistently having a number of large, multi-vehicle crashes in certain trouble-spot areas,” said Garcia, who pointed to a 2010 University of Wyoming study that found road closures had dropped and crashes were the lowest in 10 years in the year after the signs were installed.

The program was so successful that the state expanded it to several other highways over the next seven years, Garcia said. And the public hasn’t raised a stink about the signs, which can gradually reduce the speed on some interstates from 75 mph to 45 mph in a bad storm, he said. “When people can see a reason for a speed reduction, they’re more tolerant.”

But getting drivers to comply has been a challenge in some states, especially when changeable speed limits are used for traffic congestion.

“When there is weather ahead, drivers are more likely to slow down,” said Mena Lockwood, assistant state traffic engineer for the Virginia Department of Transportation, which uses variable speed limits on some highways. “When there is congestion ahead, they’re less inclined because they can’t see it.”

But the study also noted that the programs rely heavily on driver compliance and in many states are only advisory, which means police can’t issue tickets. In other states, the law allows the changeable speed limits to be enforced.

Shelia Dunn, spokeswoman for the Wisconsin-based National Motorists Association, a drivers’ rights group, said variable speed limits are “very confusing” to motorists and some consider them nothing more than a speed trap.

“You’re going down the highway at 65 and you see the variable speed limit sign and think it’s just a suggestion and not an actual speed limit, and all of a sudden you’re pulled over,” she said. “You don’t even realize you’ve done something wrong.”

Enforcement has been a challenge for police, the federal study found. Officers sometimes are unsure of the speed limit or fear there isn’t enough supporting evidence to issue speeding citations.

And the systems can be expensive. The federal report estimated that deploying them along a route can cost anywhere from under $10 million to nearly $40 million. It noted that there is limited information about whether a system’s benefits equal or outweigh its costs.

Thumbs Down in Missouri

While more states are turning to changeable speed limits, Missouri decided to back away.

Under a pilot program launched in 2008 aimed at reducing congestion and improving safety, the state installed 70 solar-powered variable speed limit signs along 35 miles of highway in the St. Louis area.

At first, police enforced the speed limits, but they became reluctant to continue because they were unsure of what the speed limit was at any given time, as they often were parked downstream of the signs.

The state commissioned a study in 2010, which concluded that while the signs had helped cut the number of crashes along the corridor, they hadn’t improved congestion.

Researchers also surveyed the driving public and law enforcement and found wide dissatisfaction. The majority of respondents agreed the program should be eliminated.

“The feedback we got from citizens and law enforcement partners was nobody was noticing any difference,” said Tom Blair, a district engineer for the Missouri Department of Transportation. “Motorists thought of it as a speed trap. They were always questioning whether law enforcement was out to get them.”

Blair said Missouri spent about $900,000 for the program, considerably less than many other states.

“We walked away from it because we couldn’t prove we had dramatically reduced the number of crashes or decreased traffic congestion,” he said. “We didn’t want to spend a lot more money on it.”