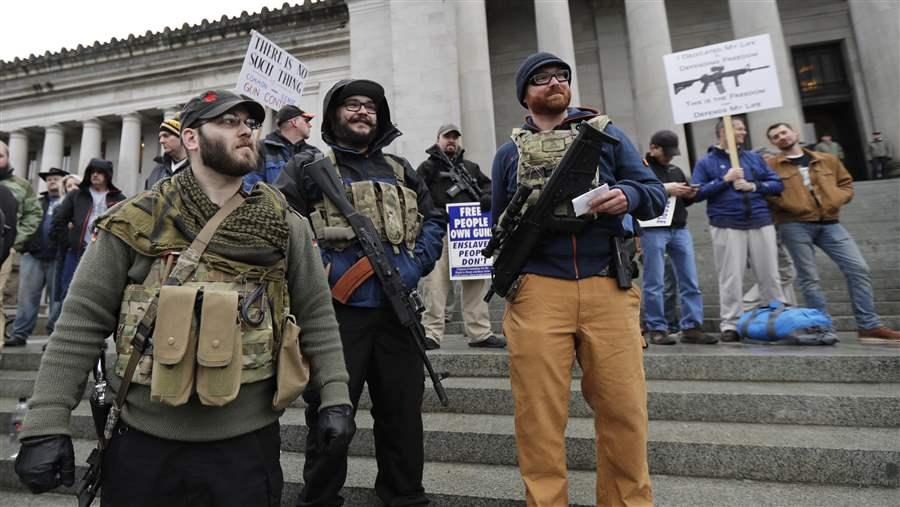 Gun rights supporters rally in Olympia, Washington, against several gun-control bills, including a ban on bump stocks, being considered by the Washington state Legislature. Lawmakers in at least 30 states introduced legislation to ban bump stocks in the wake of the Las Vegas mass shooting last October, but only two have been approved.

Editor's note: The article has been updated with voting results from the Washington House of Delegates.

In the wake of the Las Vegas concert massacre last fall, lawmakers in at least 30 states introduced legislation to ban “bump stocks,” which convert semiautomatic guns into automatic weapons and which were used by the gunman. Only two of the bills passed.

President Donald Trump this week said he’ll direct the Department of Justice to outlaw bump stocks nationwide. But the lack of state action on a device that allowed one man to shoot more than 500 people in a quarter-hour serves as a cautionary tale for those who think the latest tragedy — the killing of 17 at a high school in Florida — might finally prompt states to enact tougher gun laws.

In fact, the Florida House voted not to move ahead on a proposed ban on assault-style weapons just days after the school shooting with an AR-15 — as tearful students from the school looked on from the House gallery.

As Congress continues to resist taking action to restrict firearms — and the National Rifle Association suggests arming more teachers as an answer — some are looking to state legislatures for change. This week, high school students and others in Florida, Georgia, Colorado and North Carolina marched on state capitols to demand more restrictions.

Daniel Webster, director of the Johns Hopkins Center for Gun Policy and Research, said he expects that states will take some action on firearms, perhaps pairing some tighter gun regulations with other measures that make it easier to own a weapon.

Following the 2012 Sandy Hook Elementary School shooting, for example, the state of Oregon closed the gun-show loophole that allowed people to buy guns in private sales or at gun shows without background checks. But it also made it easier for people with concealed-carry permits for guns to prove they have the right to carry them.

After the Florida high school shooting, areas of possible action include increasing the age at which residents are allowed to buy semi-automatic weapons and tightening restrictions on gun ownership for those with mental health issues.

But the bump-stock debate over the past few months illustrates how difficult it will be for gun-control advocates to enact other changes state by state. The challenge goes beyond the National Rifle Association, which is among the top outside-money spenders on the federal level and wields significant influence in statehouses. In each state, gun control supporters must navigate labyrinths of special interests, geography and partisan politics in order to succeed.

In Massachusetts, Gov. Charlie Baker, also a Republican, allowed his lieutenant governor, Karyn Polito, to sign the bill, also with no comment.  The governor’s office later issued a statement that the two leaders support the “Second Amendment to the Constitution and Massachusetts’ strict gun laws.”

Advocates for the bump-stock bans were successful in those two states because the NRA is not particularly strong in either one, said Adam Winkler, author of “Gunfight: The Battle Over the Right to Bear Arms in America,” and a law professor at the University of California at Los Angeles. And, in the case of New Jersey, Christie had nothing to fear from the gun lobby because he was on his way out.

The strength of the NRA and other gun groups, Winkler said, is that its supporters vote on guns as a single issue and turn out to vote. The gun-control community, by contrast, is not as single-minded, he said. He and others suggested that might be changing with the grass-roots movements that are developing after the Florida high school shooting.

“The student involvement is remarkable,” said Kristin Goss, a Duke University professor of public policy and author of “Disarmed: The Missing Movement for Gun Control in America.”

“Their involvement at critical-mass levels,” she said, “and their formal incorporation into national gun control organizations, is probably the most significant development on the pro-regulation side that I’ve seen since I began studying this issue two decades ago.”

Days after high school students demonstrated in his state, Republican Gov. Bill Haslam told Stateline early Friday that he would support a ban on bump stocks. There’s such a bill pending in his state Legislature. 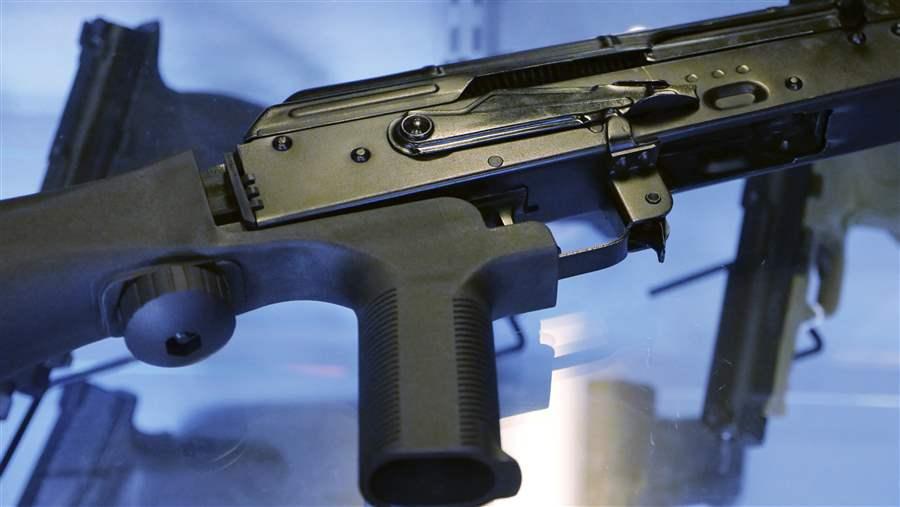 A bump stock is attached to a semi-automatic rifle at the Gun Vault store and shooting range in South Jordan, Utah.

Still, political analyst Larry Sabato, director of the University of Virginia Center for Politics, said recent mobilization of high school students is important — but not game-changing — because of the political entrenchment regarding guns.

“The parties are in their foxholes on so many issues, and this is a basic issue,” he said. “People think Republicans will be crawling out of their foxholes, and making their way across the DMZ to visit the Democrats. It’s not going to happen.”

In Virginia, for example, a House subcommittee in late January defeated a bump-stock ban, along with several other gun-control bills, on a party line 4-2 vote with Republicans in the majority, despite testimony from a state resident who had survived October’s Las Vegas shooting.

The subcommittee chairman, Republican Del. Thomas Wright of Amelia County, said that while he was sympathetic to the survivor, he did not think banning bump stocks was the answer.

“Until the evil in people’s hearts changes, the laws we pass cannot fix that,” he told a local news outlet.

Ari Freilich, staff attorney at the Giffords Law Center to Prevent Gun Violence, suggested that Trump’s support for a ban on bump stocks would be “helpful” but not necessarily enough in the states.

In Washington state, the House last week voted 56-41 for a measure that would ban the sale of bump stocks and create a state police “buy back” program for the devices. The Senate, which passed a similar bill last month, is expected to approve it, and Democratic Gov. Jay Inslee has pledged to sign it.

But proposed bump-stock bans have failed in Mississippi and New Mexico, states with high rates of gun ownership, according to a 2015 analysis published in the journal Injury Prevention. They already were illegal in California before the Las Vegas massacre.

Consider Georgia, where Democratic Rep. Mary Margaret Oliver introduced a bill last fall to ban bump stocks. The bill is still pending. Gun regulation supporters marched on the Georgia Capitol in recent days, but the outlook for stiffer regulation there is still bleak.

Jerry Henry, executive director of Georgia Carry, the predominant gun-rights group in the state, said he does not believe that there will be changes to gun laws this year.  Henry said group members work to contact every state representative and senator each year to push their issue, demonstrating their single-minded commitment. Henry said they are less about giving money and more about personal contacts, reminding lawmakers of their presence.

Notably, the Pew Research Center (the Pew Charitable Trusts also funds Stateline) found last year that about 21 percent of gun owners have contacted a public official about gun policy, while just 12 percent of non-gun owners have.

“We do represent people who strongly believe in the Second Amendment,” Henry said. “If you start giving up one right, even a portion of a right, you will eventually lose all of them.”

Florida has some of the most lax gun laws in the nation, and legislators resisted efforts to tighten them after earlier shooting tragedies, including the massacre at an Orlando nightclub in 2016. The only laws Florida has passed recently are ones to expand concealed-carry rights or further loosen gun regulations.

Nevertheless, after high school students demonstrated and met with lawmakers in the past few days, the Florida House and Senate are readying a package of gun bills.

Those efforts include raising the minimum age to obtain and buy assault-style rifles from 18 to 21, providing more mental health counselors and security at schools, and enacting a waiting period for semi-automatic weapons purchases.

A bump-stock bill is also pending in the Florida Legislature, but lawmakers have not acted on it.