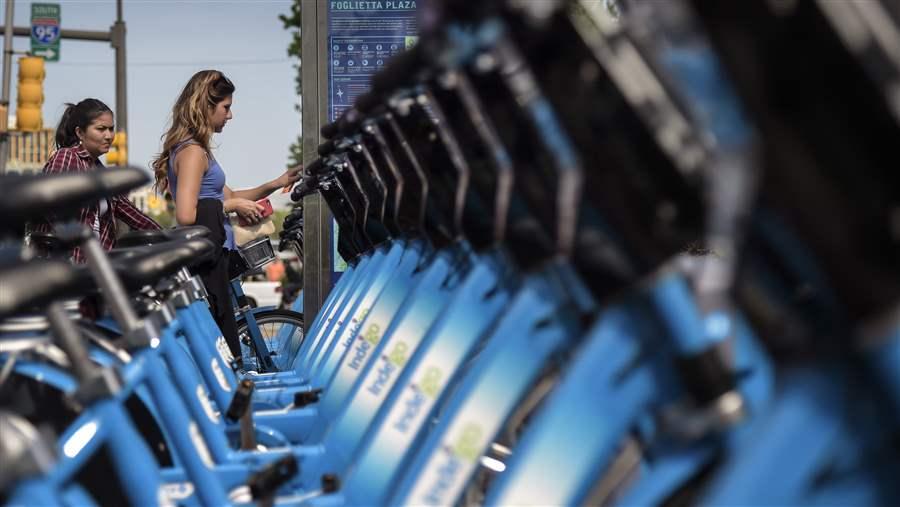 Indego is a bike-share program in Philadelphia. The city has been promoting so-called bike equity to ensure that all residents have access to bike sharing, including discounts on memberships for low-income riders. Other cities have similar programs.

Bike sharing may be the ultimate symbol of gentrification, the province of avocado-toast loving, espresso-swilling — and mostly white — millennials.

But some cities are taking measures to combat that, by making it easier for low-income riders and those without a credit card or smartphone to take a two-wheeler for a spin.

They’re calling it bike equity, and to achieve it, cities are trying a number of things: steeply discounted memberships for food stamp recipients; bike-riding classes; pay stations that accept cash; and recruiting riders from underserved neighborhoods.

Bike equity sounds like a buzzword, but research shows it has its advantages: Bike sharing can bring disadvantaged communities a reliable — and healthy — alternative to mass transit, according to a June report by Portland State University in Oregon.

The interest is there, too: Most low-income people of color said they would like to bike share, the report found, but the high cost of membership, as well as worries about traffic safety, stopped them.

Ten years ago, Washington, D.C., was the first U.S. city to roll out a bike-share program. The idea was to provide tourists and locals with a fun way to get around while reducing congestion and improving air quality. Other cities, including Boston, Denver and New York, soon followed.

But the bikes haven’t been universally welcomed, and in some places it took a while for organizers to set up programs for low-income users, inflaming tensions over an amenity that many say smacks of gentrification. In San Francisco, for example, bike sharing has met with fierce opposition.

The city’s bike-share program, which includes San Jose and the East Bay area, started in 2014 but didn’t offer discounted rates for low-income riders until early 2017.

Last summer, community activists successfully blocked bike-share stations in the city’s Mission District, a historic, predominantly Latino neighborhood, because, they said, the program didn’t do much for their community, fueled gentrification, and didn’t include them in the plans.

Locals can save money by buying a bike for $65, said Erick Arguello, president of Calle 24 Latino Cultural District. “These are amenities that are benefiting people who are gentrifying the neighborhood.”

Michael Tanner, a senior fellow with the libertarian Cato Institute, called discounted bike-share programs a waste of money and “yuppie do-gooderism.” Far better, he said, would be to help lower-income people get what they really need: affordable housing in rapidly gentrifying neighborhoods.

Philadelphia was the first U.S. city to incorporate bike equity into its planning from the start, said Steve Taylor, spokesman for the League of American Bicyclists, a biking advocacy group based in Washington, D.C.

Waffiyyah Murray, program manager of Philadelphia’s Better Bike Share Partnership, said city officials took note of how other places had been slow to include underserved communities. “Equity has to be the focal point,” she said.

In 2015, the city rolled out its Indego bike-share, installing 20 stations in underserved communities and offering a cash payment option, and then in 2016 adding a discounted pass for people who receive public assistance. The city even offered a digital literacy and safe bike riding course: Digital Skills and Bicycle Thrills.

It can be difficult to measure the costs of the programs, however. There’s very little data, said Nathan McNeil, the urban studies researcher at Portland State University who authored the June report.

Indego relies on a combination of grants and corporate sponsorship plus membership fees, but Murray was unable to say what it costs each year for Philadelphia to provide its Access Pass to low-income users because, she said, discounted members are part of the overall operations budget. And though the city received a grant from the Better Bike Share Partnership to run its discounted pass program, Murray said the grant funders wouldn’t allow the city to disclose the amount.

(Philadelphia Deputy Managing Director Mike Carroll last year announced a $2.5 million grant from the JPB Foundation to the partnership to promote bike-share equity, following a $5.8 million grant to the city in 2014.)

Since its launch, Indego users have logged nearly 2 million rides. Ten percent of the rides were by the more than a thousand low-income riders who receive public assistance and have signed up for the Access Pass. Indego sold 975 of the access passes in 2017 alone, surpassing their expected goals by 30 percent, Murray said.

“We’re definitely proud of that,” Murray said. “And the number is growing.”

The Better Bike Share Partnership, the coalition that launched Indego, has given grants ranging from $10,000 to $75,000 to other cities, including Atlanta, Los Angeles and Milwaukee, to set up similar programs or to reach low-income communities.

It’s taken a while to get to this point. The first bike-shares were set up in more affluent, predominantly white neighborhoods, such as the Wall Street area in lower Manhattan, said Nathan McNeil, the urban studies researcher at Portland State University who authored the June report.

To some degree, he said, this made sense. Cities investing in bike-share programs wanted to demonstrate that they could be successful. Starting with high-traffic areas that attract tourists is a way to ensure that more people ride.

But that approach contributed to the perception that bike sharing wasn’t for everyone, McNeil said.

Last year, McNeil and a team of researchers surveyed residents living near bike-share stations in traditionally low-income communities in Brooklyn, Chicago and Philadelphia. About a quarter of people surveyed said they worry that bike sharing spells greater gentrification — and getting priced out of the neighborhood, he said.

Cost was a factor too, the report found, but discounts provided a big incentive for joining. Once people did join, they bike share just as often as higher-income riders.

The survey found that the biggest barrier to bicycling in general, regardless of race or income, was concern about traffic safety. To remedy this, cities have to create bike lanes so that riders feel safe, McNeil said, and need to educate potential riders about riding through urban streets.

This year in Boston and neighboring Brookline, Cambridge and Somerville a program started offering discounts to food stamp recipients. The Snap to Ride program offers beneficiaries of the Supplemental Nutrition Assistance Program, or SNAP, a $5 a month membership and a $50 a year membership. (The normal annual rate is $99.)

The metro area’s bike-share, called Boston Hubway, previously offered discounts to people in public housing. With that program, about 800 out of 15,000 annual riders received financial assistance. With the new Snap to Ride program, it’s expected that 10 to 15 percent of the riders will be low-income, said Benjy Kantor, senior marketing manager with Motivate, a national bike-share operator which manages the Boston Hubway.

The Bay Area in California has a similar program for food-stamp eligible riders, as do Philadelphia, Washington, D.C., and Montgomery County, Maryland.

Those who run the programs said it’s hard to estimate how much it takes to provide low-income access, but among the costs are marketing expenses. In Portland, for example, the Better Bike Share Partnership in 2016 gave the city a $75,000 grant to reach low-income communities and provide discounted memberships in the program’s first year.

Typically, bike-shares run as a nonprofit-public hybrid, funded by a combination of federal and philanthropic grants and corporate sponsorship. When offering discounted bike-share memberships, cities typically don’t incur up-front costs, Kantor said. Cities may end up paying in other ways, such as repairing wear and tear on bikes, he said.

But even with discounted rates, not everyone is taking advantage of them. For example, D.C.’s Capital Bikeshare provides discounted memberships to community organizations in the region. But several of the community partners told Stateline that most of their clients don’t take advantage of the program.

Gearin’ Up Bicycles, a D.C. nonprofit that works with underprivileged youth, pays for the bike-share memberships so that participants can bike share for free, according to executive director Sterling Stone.

“But they’re not jumping on it,” Stone said. He expected at least 15 people would sign up, but only six are enrolled, he said.

Bike sharing has helped Maria Teresa Llanos and her husband settle into their new life in the United States after immigrating from Venezuela.

Llanos and her husband were relieved to hear that the school where they’re learning English, Carlos Rosario International Public Charter School, provides students with a discounted bike-share pass, $5 for a year.

The only problem: The last time she was on a bike, she was 12.

Today, she says, she and her husband bike share to class. They even use it for their new photography business. She figures she saves at least $40 a week on transportation.

In May, Detroit rolled out its MoGo bike-share program, modeled closely after Indego. In the years leading up to its launch, the city worked closely with Philadelphia officials, said Lisa Nuszkowski, founder and executive director of MoGo Detroit Bike Share. Detroit offers $5 annual memberships to anyone receiving state benefits, and riders can attend free how-to classes.

Bike sharing “isn’t going to be the panacea for everything,” Nuszkowski said. “But it can be one component of a transportation ecosystem.”

The city has logged 113,000 rides to date, exceeding its initial ridership goal, Nuszkowski said, and 18 percent of its monthly and yearly members are low-income riders. Today, she said, the program has bike-share users from every ZIP code in the city, a sign that the outreach is working.

“We wanted to make sure we weren’t dropping a shiny new toy on the city and saying, ‘you’re welcome, everyone,’ ” Nuszkowski said. “To be successful, it really has to be reflective of the city we serve.”