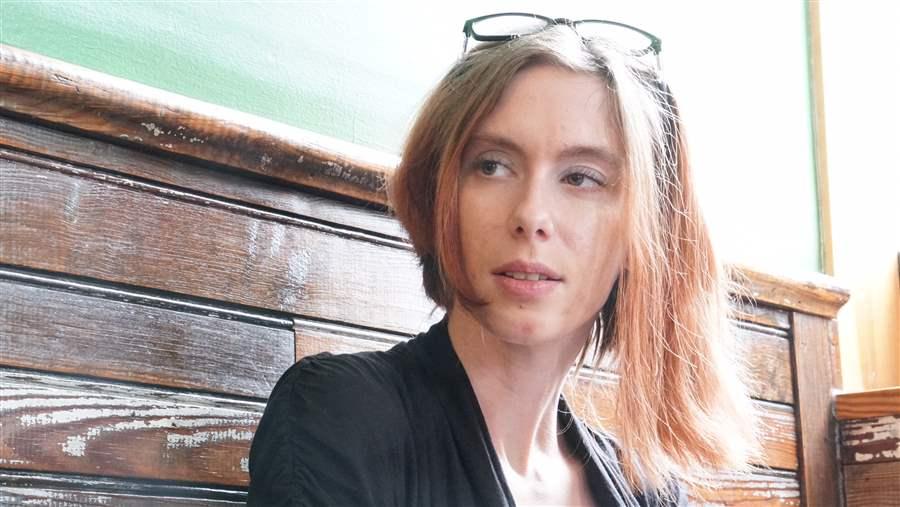 Kendra Williams, who is in recovery from addiction, works with the North Carolina Harm Reduction Coalition in Wilmington, distributing needles to drug users around the city. North Carolina and several other states are opening syringe exchanges as the death toll from the opioid epidemic continues to rise.

Editor's Note: The photography credits have been corrected to Calvin Megginson.

WILMINGTON, N.C. — Until the opioid epidemic began seeping into nearly every city and town in the country, the idea of a Main Street storefront offering free needles, alcohol wipes and small metal cookers for heroin users was unthinkable in a conservative Southern city like this one.

But these days, most of the roughly 100,000 residents of this historic port on the Cape Fear River are painfully aware that their community has a serious drug problem. Syringes carpet sections of public walkways, drug users congregate in vacant lots, and an increasing number of residents are attending the funerals of friends and family members who have died of an opioid overdose.

As a result, many police officers here fully support syringe exchanges, places where drug users can go to dispose of used needles, pick up fresh ones, get health exams, and maybe find out about treatment options. They say they’re willing to overlook the fact that possessing drug paraphernalia, including syringes, is an arrestable offense.

But even in North Carolina, where the state Sheriffs’ Association helped a grassroots harm reduction organization enact the most liberal syringe exchange law in the country in 2016, many cops still insist that giving free supplies to heroin users simply enables their drug use.

“Police officers are just like the rest of the public,” said Capt. Lars Paul of the Fayetteville Police Department. “Until I got educated on harm reduction, I questioned why we were giving drug users all kinds of free supplies too. It was just a matter of taking the time to talk to folks and learn about the public health benefits of syringe exchanges.”

Kendra Williams, a recovering addict who works part-time for the Wilmington syringe exchange, said some cops in the drug unit there still don’t take the law seriously. “They’ll take away ID cards proving they’re syringe exchange clients and tell them it doesn’t mean anything. If they want to arrest you, they’ll find a way.” 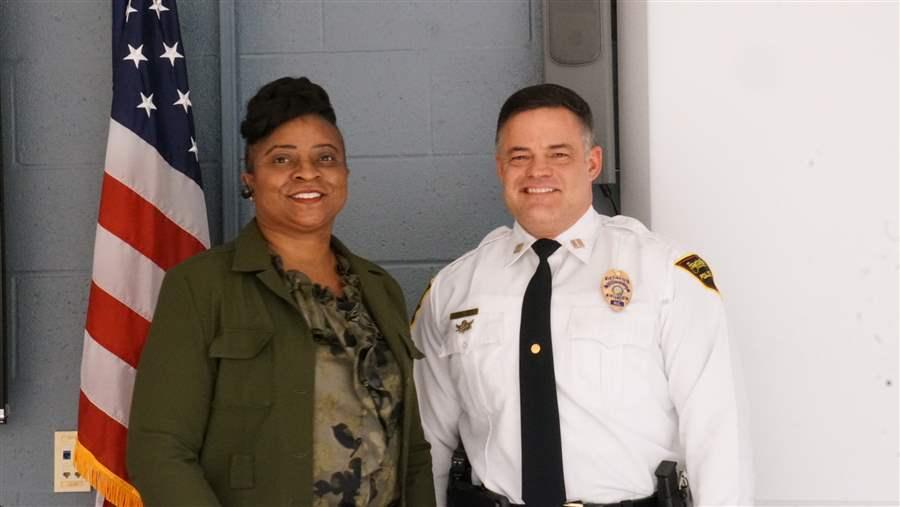 Sgt. Sheila Washington and Capt. Lars Paul of the Fayetteville, North Carolina, police force support local harm reduction programs. Many police officers in North Carolina and other states have been instrumental in getting syringe exchanges approved in state legislatures.

Last year, a poll in Ohio — among the nation’s hardest-hit states — found that half of adults in that state favor syringe exchange programs. Politicians are listening.

Nationwide, at least a dozen states legalized syringe exchanges in 2016 and 2017, said Daniel Raymond, policy director of the Harm Reduction Coalition, a New York-based national organization that advocates for syringe exchanges. And nearly all of the new laws were signed by Republican governors and approved by GOP-led legislatures, including in Ohio.

That’s not surprising, Raymond said. Many Republican leaders’ constituents — particularly middle-income white males — are among those who have suffered most in the opioid epidemic.

Even so, most of the lawmakers and governors who ultimately approved the laws resisted until they received endorsements from law enforcement groups, Raymond said. Otherwise, they would have risked appearing soft on crime.

A dozen states — Florida, Indiana, Kentucky, Louisiana, Montana, New Hampshire, North Carolina, North Dakota, Ohio, Tennessee, Utah and Virginia — enacted laws in 2016 and 2017 that protect the employees and clients of syringe exchanges from existing state drug paraphernalia laws that otherwise could be used to prosecute them for possessing a syringe, according to Raymond. 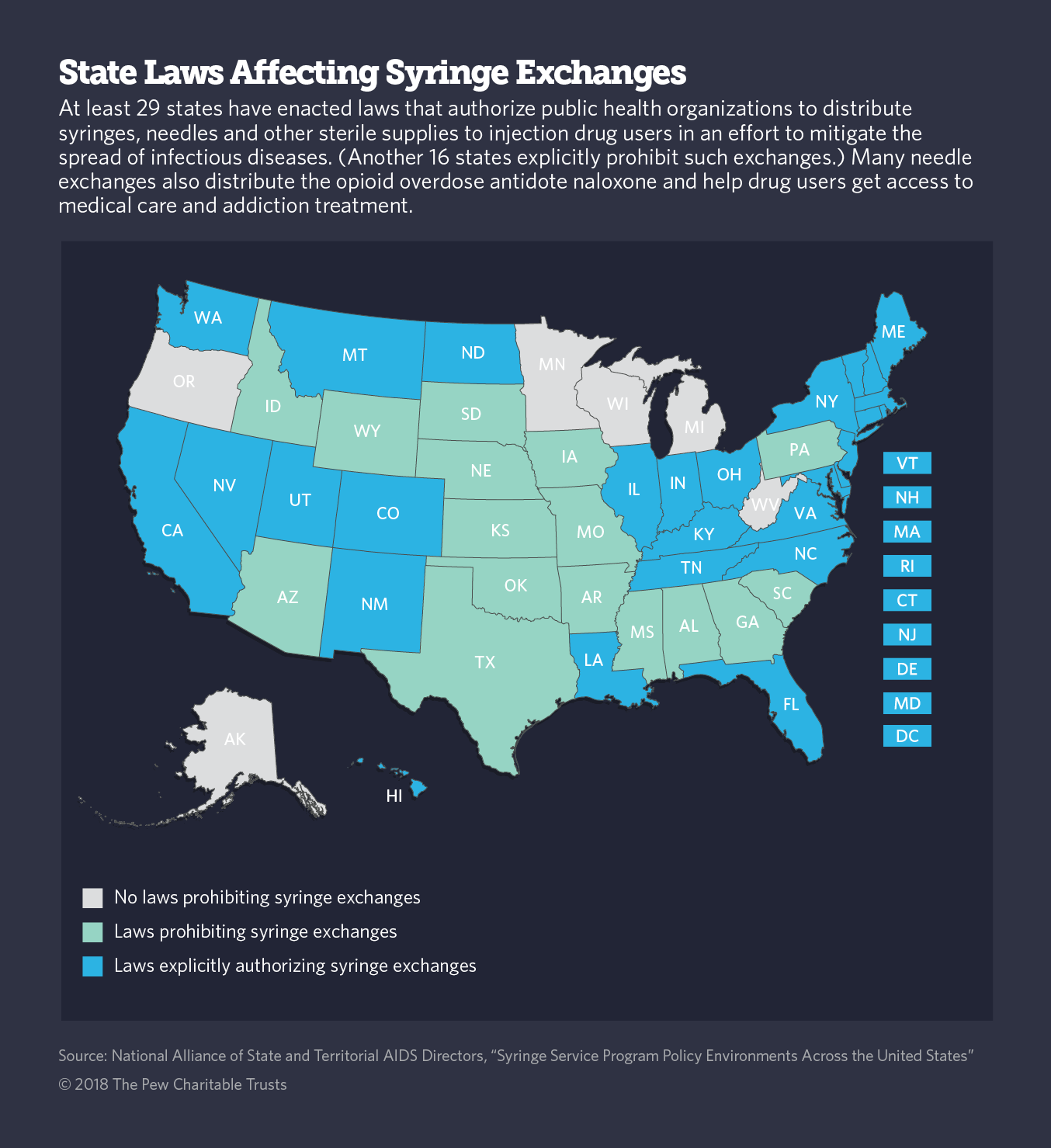 Syringe exchanges, also known as needle exchanges, first came into being in the late 1980s in places such as New York City and San Francisco and in liberal states such as Massachusetts, Minnesota and Washington. Once it became clear that the HIV/AIDS epidemic was spreading through needle sharing among injection drug users, public health officials took up the cause.

But until recently, syringe exchanges were nonexistent in rural towns and cities in the rest of the country, except for informal underground efforts organized by advocates.

In North Carolina, syringe exchanges now are cropping up in office parks, pawn shops, church basements, fire stations, hotel parking lots and treatment centers throughout the state, and the state health department is tracking their progress. So far, 26 syringe exchanges have opened, and the coalition is working to open more.

“Until the law was enacted, people were afraid they’d be arrested if they came to pick up supplies,” said Robert Childs, director of the North Carolina Harm Reduction Coalition. “And we were afraid to advertise.”

North Carolina’s law made it simple for a syringe exchange to open its doors, he said. For underground groups already supplying drug users with sterile supplies, it simply meant registering with the state health department and providing a plan to ensure the privacy of clients. For new groups, it meant finding funding and a base of operations, even if it was a private vehicle in a parking lot. 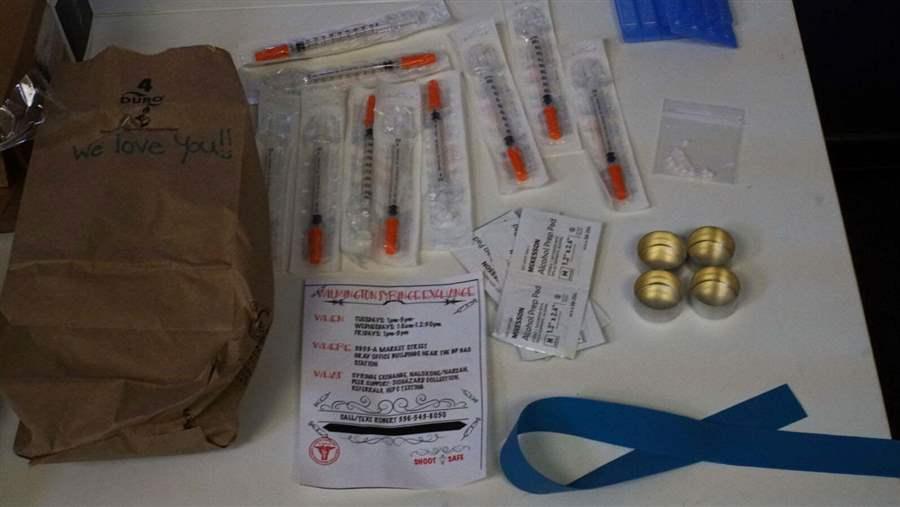 Unlike the AIDS epidemic of the 1980s and previous drug epidemics, which were spawned and largely defeated in urban areas, this opioid epidemic is ensnaring people who live in far-flung small cities and rural communities. In addition to mounting overdose deaths, these rural communities are experiencing unprecedented surges in hepatitis C infections and increasing threats of HIV/AIDS outbreaks.

Despite nearly 200 people testing positive for HIV in Scott County in 2015, Indiana’s then-Gov. Mike Pence, a Republican, was reluctant to allow a syringe exchange, because of his moral opposition to drug use. But among those whom Pence sought for counsel, according to The New York Times, was the local sheriff, who told him: “I believe the only thing we can do … is to get clean needles out there.” Pence declared a public health emergency and allowed a syringe exchange to open to curb further infections.

That exchange has since closed because of lack of support.

Even so, Pence’s emergency declaration marked a turning point for other Republican governors, said Gary Tennis, president and CEO of the National Association of Model State Drug Laws, a research group supported by the federal government. It made it easier for conservative politicians to support syringe exchanges.

But if states want to attack their long-term drug problem, Tennis said, it will be essential to nurture grassroots coalitions like North Carolina’s and build political will, particularly with law enforcement. Without that local support, standing up and maintaining syringe exchanges in affected communities will be impossible, he said.

Nationwide, LaKosky said, the list of syringe exchanges, both official and unofficial, has grown by about 15 percent a year for the past three years, with the fastest growth in Kentucky, North Carolina and Ohio.

“We’re seeing the greatest growth in rural areas, where there’s been an historic lack of access to health services of any kind,” LaKosky said. “The opioid epidemic is shining a light on those places.”

West Virginia, which has by far the highest opioid overdose death rate in the country, has not yet enacted legislation to authorize syringe exchanges. But a proposed opioid response plan released by the state health department in January lists harm reduction, including syringe exchanges, as a top priority.

Even without statutory authorization, at least 10 West Virginia municipalities have started exchanges, including eight with affiliations to county health departments.

In Charleston, the state’s new director of the Office of Drug Control Policy, Dr. Michael Brumage, said the police department there fervently supports the city’s syringe exchange. But just a few miles outside of the city, he said, the attitude among police officers is very different.

Dr. Michael Kilkenny, who as Cabell-Huntington public health chief runs a syringe exchange an hour’s drive away in Huntington, said the lack of state authorization makes him nervous.

The city’s drug control director when the exchange opened in 2015, Jim Johnson, said he also worried whether the police department would continue to support it without a state law. “All you’d have to do was stick a policeman outside the office on Monday and you’d have to close the doors on Tuesday.”

In Philadelphia, which has also been hit hard by the epidemic, Scott Burris, director of Temple Law School’s Center for Public Health Law Research, said Kilkenny’s concerns are warranted. To be effective, he said, syringe exchange laws must affirm that distributing syringes is a legitimate public health function that should be funded with public money. At the same time, any new laws must remove syringes from the definition of illegal drug paraphernalia, so that anyone can possess one without fear of prosecution.